This weekend marked the first ever HFFL LAN. After what seemed like forever in planning (which was actually only about 6 weeks prior), the LAN event came and went TOO quickly.

It’s started this past Friday with the arrival of my good friend Zach, aka PGL Rick Grimes. He’s also one of my co-hosts on the Spirit of FIre podcast. He flew in early Friday. After we checked him into his hotel, we headed straight for Primanti’s. For those NOT local to Pittsburgh, Primanti’s is one of our most famous sandwich restaurants. They served sandwiches with an array of meats with cheese. But the thing that makes them unique is that they also slap on a good portion of fries and coleslaw on the sandwich, which is between two large cut slices of Italian bread. There’s a reason for this. Primanti’s sits in an area called the ‘Strip District’. No NOT strip clubs. Rather it’s a strip of land that house wholesale business. The story goes that truckers and train operators would stop into Primanti’s for a quick bite to eat. In order to help get those men back on the road/rails quicker, and help the guys get a full meal instead of only finishing part of it, Primanti’s put all of the food platter into the sandwich. This way if the guys didn’t have time to finish or could only buy the sandwich and run, they got a whole meal they could take with them. It’s since become a Pittsburgh favorite and a must stop for anyone visiting Pittsburgh for the first time. Wile in the strip district we visited several other shops included ‘Penn Mac’. That shop is known for it’s selection of imported cheeses and Italian meats. I love it for the food smells when you walk in. Just smells of Italy to me!

After this we took Zach up to ‘Mt Washington’. The view is remarkable for being mostly above the building tops so you get to see the city from a view high up, without having to fly to see it. My wife took the following panoramic view of it:

After this for there we passed through the Southside on Carson street, known for it’s MANY bars and pubs. Great place for a Bar crawl if you ever make it here. Then off to Oakland to see the majestic Cathedral of Learning, the worlds 4th largest educational building in the world and the tallest in the states. This is on the campus of the University of Pittsburgh, where I worked last.

Finally we came back to my place and hung out a bit. I showed Zach some of my collection, then he sat in on a Halo Mega Bloks build with me, helping me sort pieces. (That review will be coming later today!)

Zach is from Chicago and had I realized it earlier, his Chicago Cubs were in town to play my Pittsburgh Pirates. However, since we didn’t know this, we did watch the game on TV. Good fun. BTW, if you’re ever in Pittsburgh, try to take in a game at PNC Park. It’s absolutely one of the most beautiful baseball parks in the states. The view of the city from within the park is absolutely striking: 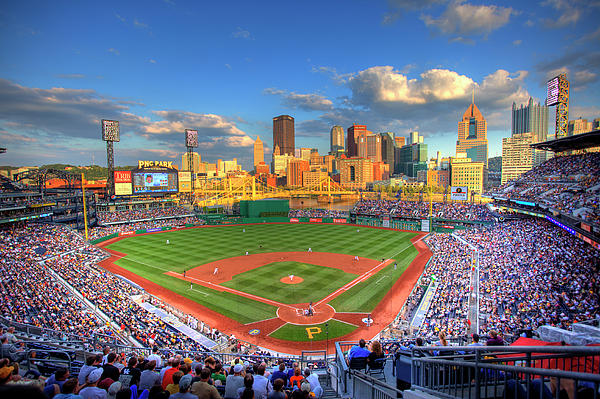 (That pic just doesn’t do it justice, trust me!)

We (my wife and I) took Zach back to his hotel room then went home ourselves. It was a long day and I got some decent sleep.

Saturday! The BIG day!! Finally the day of the LAN was here. I picked Zach up form the hotel and before going back to my place stopped at the ‘Original Oyster House‘. This at 10am…YES, Oysters at this time is perfectly acceptable here in the ‘Burgh. 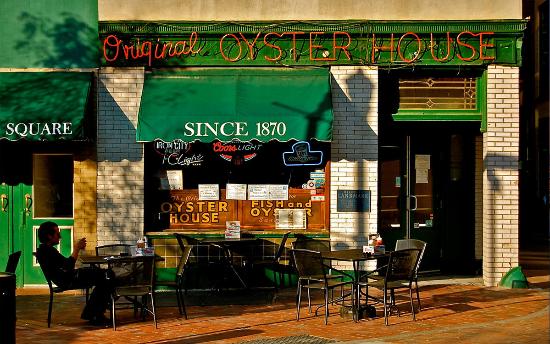 Folks, this place is an ‘institution’! As you can see it’s been around since 1870. My family actually has some history with the place as my mom was the first barmaid they ever had, back in the late 1970s. Back to my place to get things ready for the LAN. As we were packing the vehicle, we all quickly realized we were running out of room and had to secure the cooler to the roof. I still didn’t have enough room to bring everything I wanted to. In fact, one of the rare hiccups of the day was that I forget the small trivia prizes I meant to bring. (Though I did NOT forget the door prizes or the tournament prizes, thank goodness)

On to the LAN! 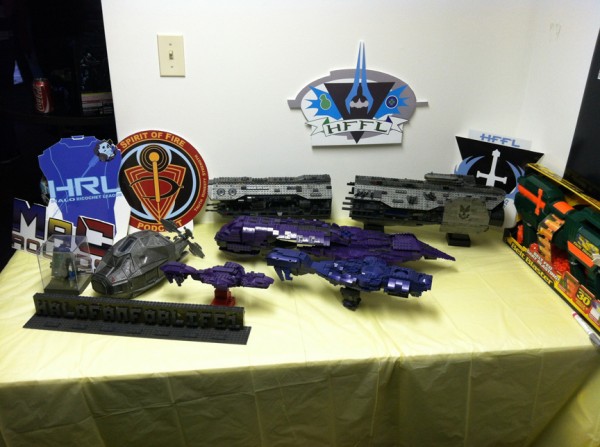 As seen here on HFFL, some of my custom Halo Mega Bloks sets along with the official Forward Unto Dawn set, a McFarlane ODST Drop Pod, a nameplate I made from spare Mega Bloks, spelling out my gamertag. (I had one given to me by MEGA back at New York toy fair last year, but it went missing.) To the far right is a nerf gun that looks very close to a Spartan Laser. The plan is to paint this up to look like the one in the game!. Of special note, there is an enclosed case showing the Halo Mega Bloks Cryo Tube. This was given to me by Paul ‘StunkPK’ Knaack, a good friend and fellow Halo Mega Bloks collector. It’s electronic too!  There is a button switch under the case that when clicked turns on LED lights that light up both the Cortana micro figure as well as the insider of the Cryo tube! THANK PAUL!!!!

And as you can see, there are the different logos representing all the different portions of when HFFL has to offer to the community! From MaC Rounds (the upcoming Web-series), to the Halo Ricochet League, launching later this week, to the Spirit of Fire Podcast, and the HFFL gaming group! 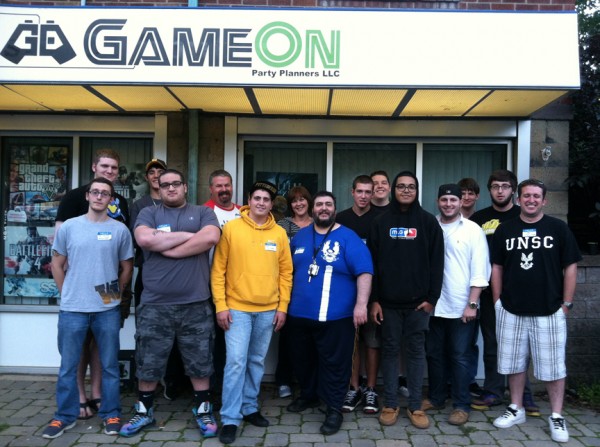 Almost everyone that attended the LAN is in the pic. My wife took the shot, while there were also three others who for whatever reason didn’t get into the pic. Notice anyone you know? The tall fellow to the back left is POD Dust Storm of Podtacular and yep, that’s Eric ‘Gho57ayame’ Hewitt in the front row, as always with his backward facing hat on! LOL My bud Zach is in the very back peeking behind the fellow wearing the MLG hoodie. 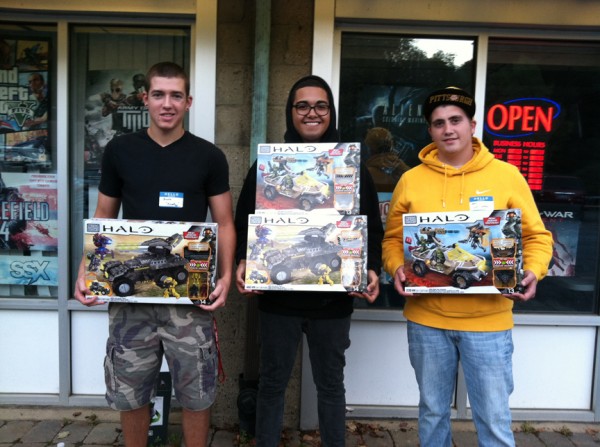 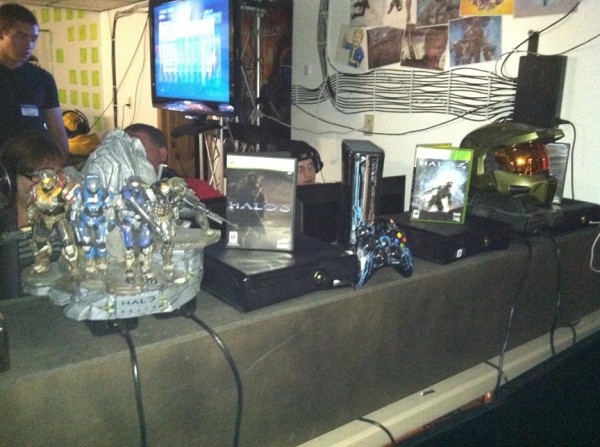 Here are some of the items Dust Storm brought to show at the LAN. (Thanks Dust for all of your work to stream the LAN!) 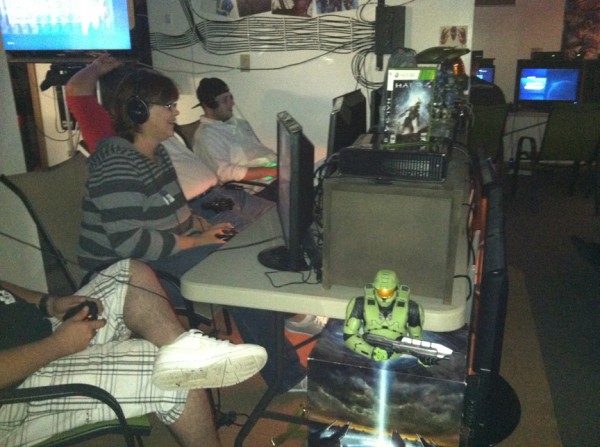 One of the few ladies to come to the LAN, Edie Kaye is gaming with Ghost!

The LAN came and went WAY too quickly. I only scheduled it for 3 hours. Amazingly enough, while I thought I’d only get people coming to it from local area, I had folks that came from Chicago, West Virginia, Ohio, Washington D.C. and all over Pennsylvania! This turned out much better than I had hoped for. I would have been happy with 8-10 people given the short notice. Instead, I ended up have 18. There were up to 26 who had registered, but late cancellations brought that number down. Still, I’m VERY happy with the turnout. Especially given it was my first go around with a LAN.

After this I let everyone know that they were welcome to join me at Primanti’s (yes again) in the Strip District. So the AFTER LAN eats commenced! 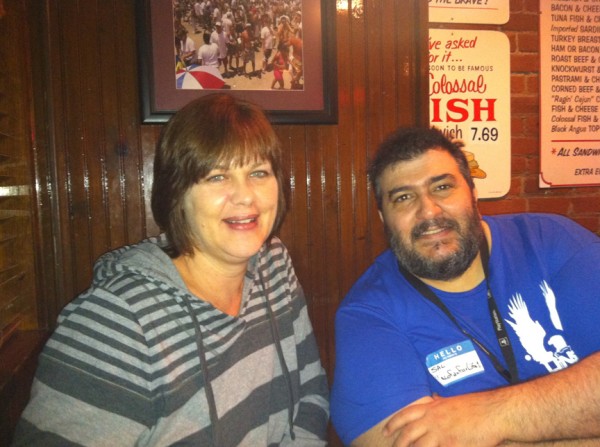 Here are Edie and myself.

Me  and some of the fellows. Sargoth to my immediate left, then Ghostayame then Joe ‘D Town Ninja’. 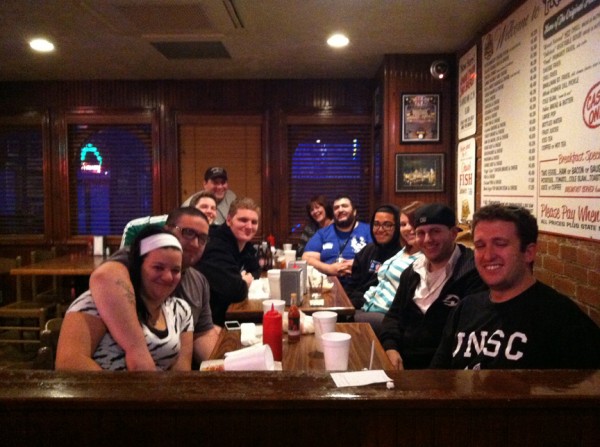 Many of the folks joined us for some good eats! 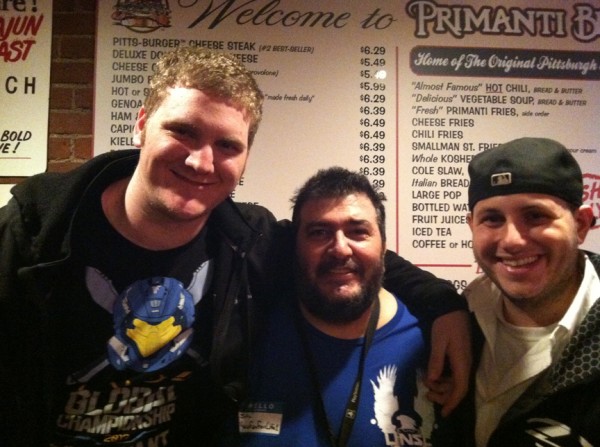 Dust Storm, Me, and Ghost. I had to thank both for coming. Again Dust for streaming and both for commentating the FFA tourney. It was exciting to watch the tourney and even BETTER to hear Ghost commentating it. What a rush. He commentated part of Zach’s play, which both excited Zach and made him nervous. LOL

Dust giving us his best Superman pose, while showing off his Halo4GC Combatant t-shirt!

And finally a panoramic view of the crew!

We took Zach back to the hotel after and went home. I was exhilarated. I could hardly sleep all night, replaying the events of the weekend.

Morning came and we picked up Zach at 11am. Yep…went to Primanti’s again, this time for a Colossal Fish Sandwich. Then off to the airport. I said my goodbyes to Zach. Unfortunately, Zach’s flight was cancelled late and he ended up having to stay one more night in Pittsburgh, but he made it home safe this morning (Monday).

Whew, long post yes…But it was worth reporting on. Such a FUN weekend. Lots of planning. Many folks asking me when the next one was going to be. Halo is ALOVE and well in Pittsburgh! 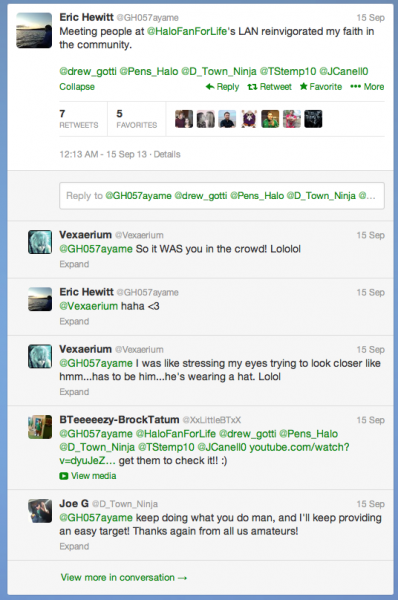 BTW, Ghost, the waitress from the previous night said Hi! She misses you! LOL

I think I can deem this a success and definitely will have another one next year, if not sooner. I’ll plan this much sooner and I’m thinking I’ll rent a hall out for it so we can have a LOT more room for MORE folks to come on out.