Ah, here we are at the final part of the four part review of the Mega Bloks UNSC Mammoth. It’s be so much fun so far. This last part brings it all together!

The next stage in the build is the Mini-Mac turret on the top rear of the Mammoth. 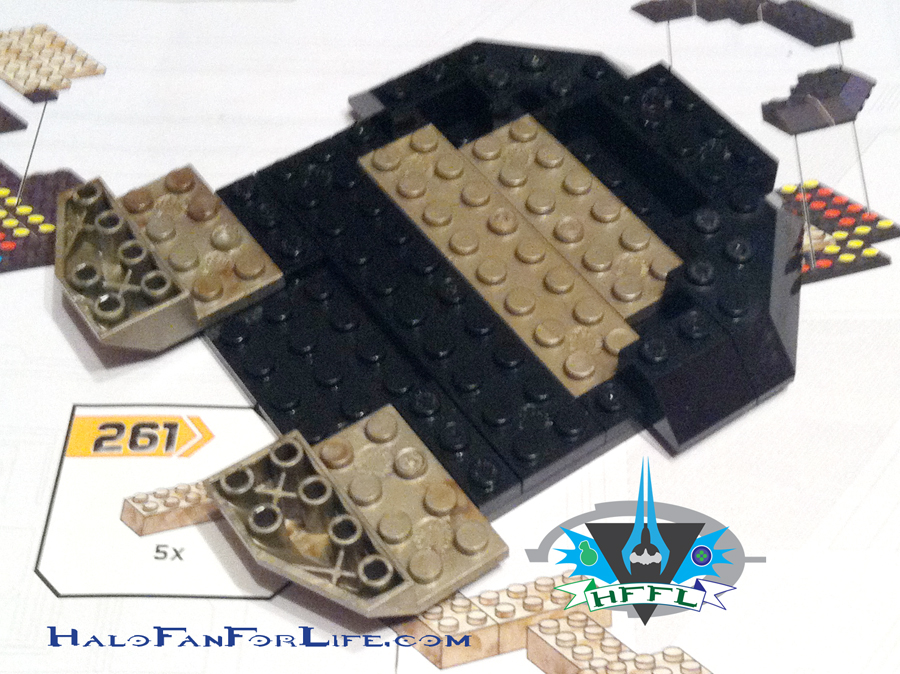 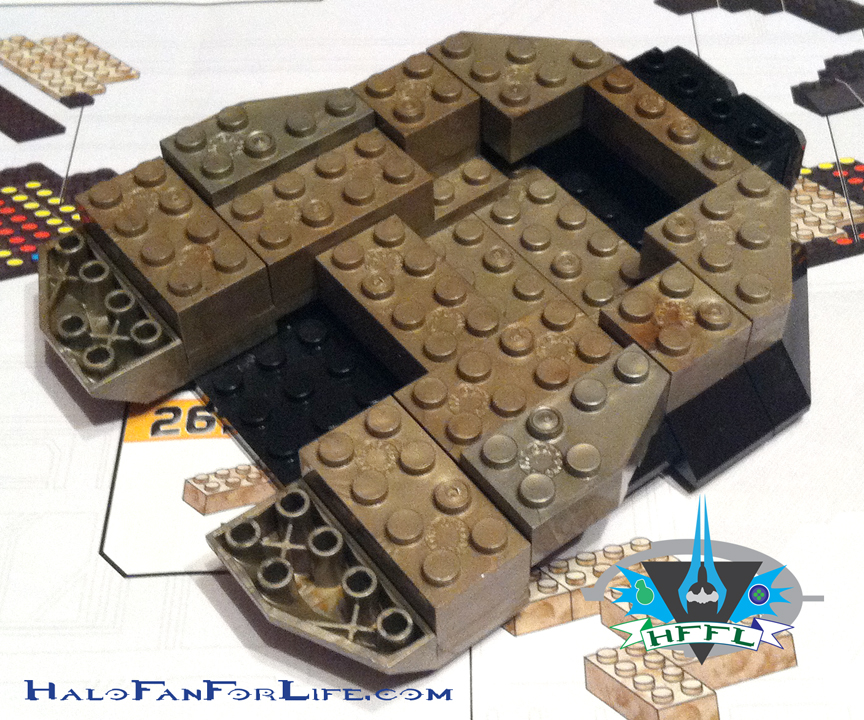 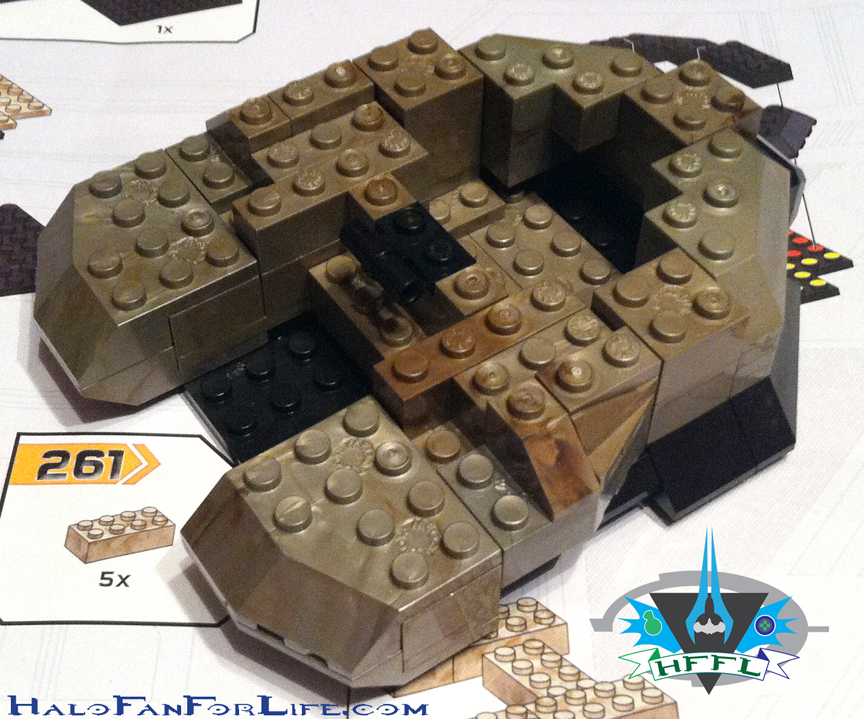 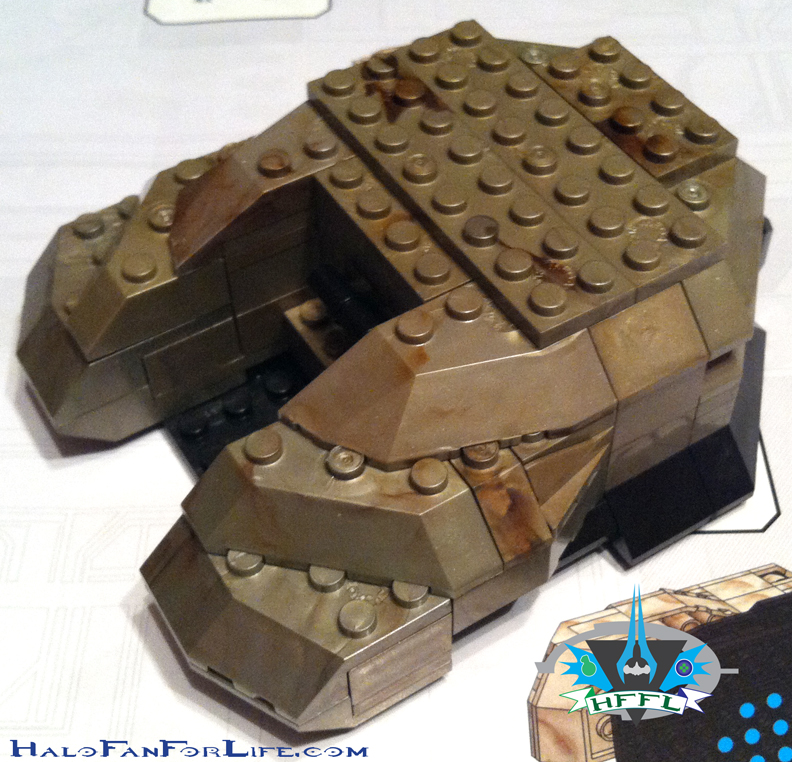 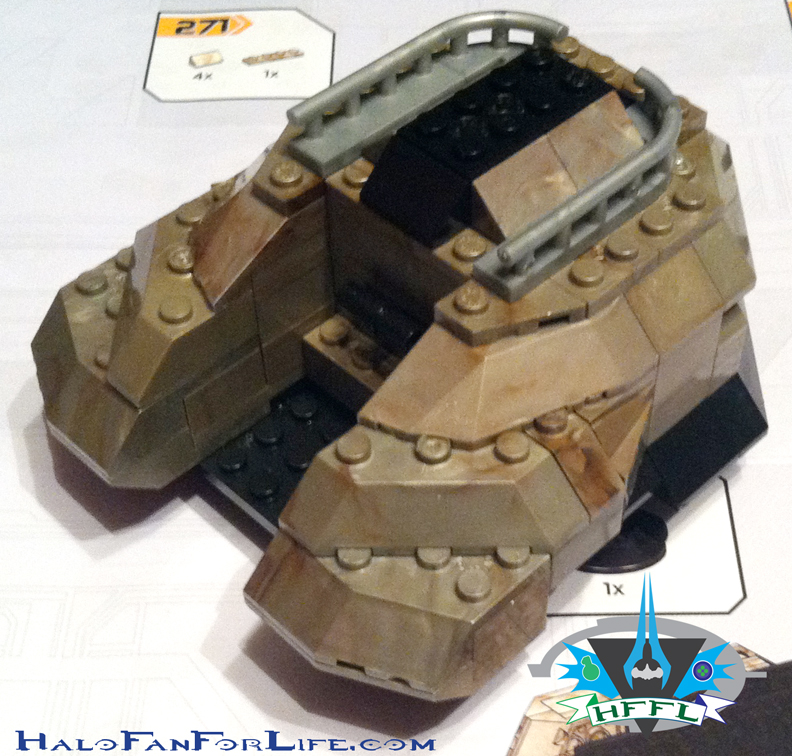 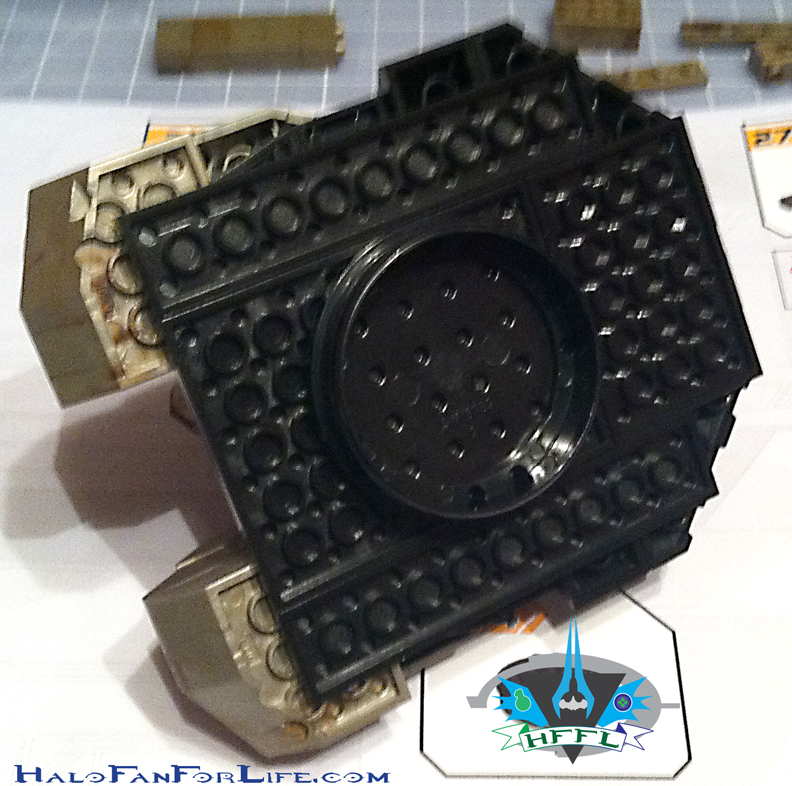 The above pic shows where the turret will attach to the Mammoth.

Next up is the cannon portion of the turret. 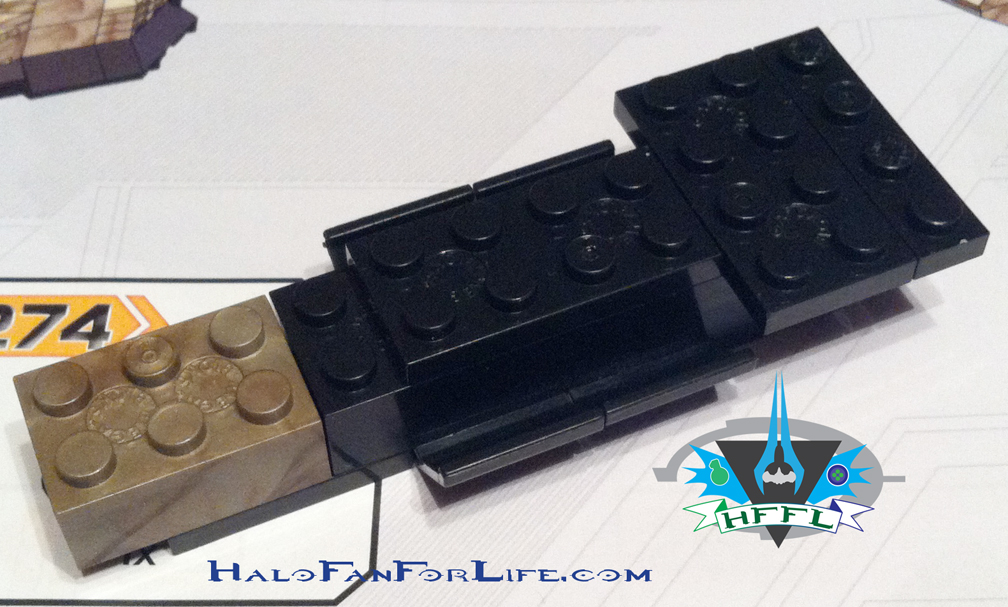 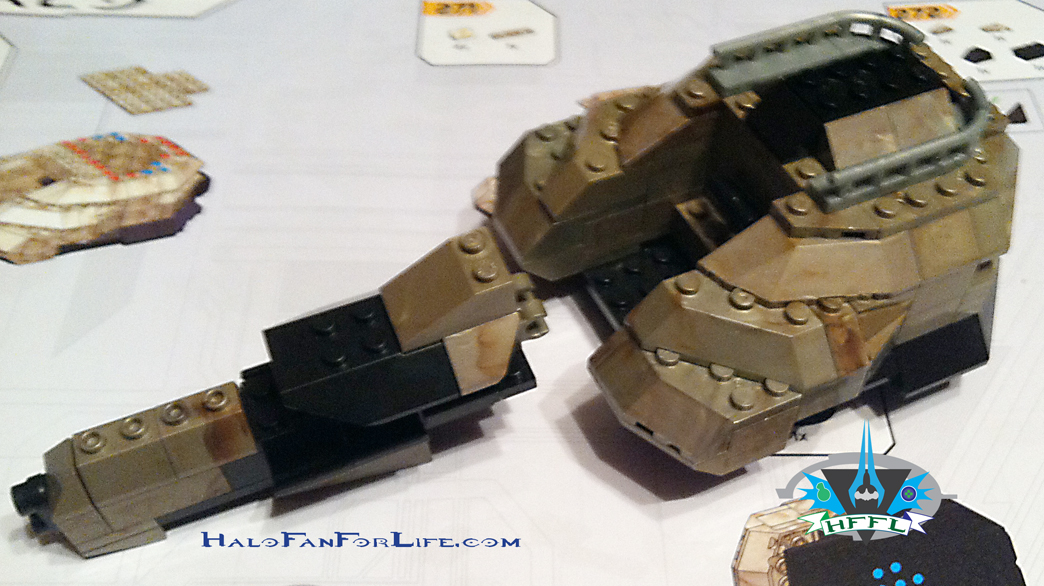 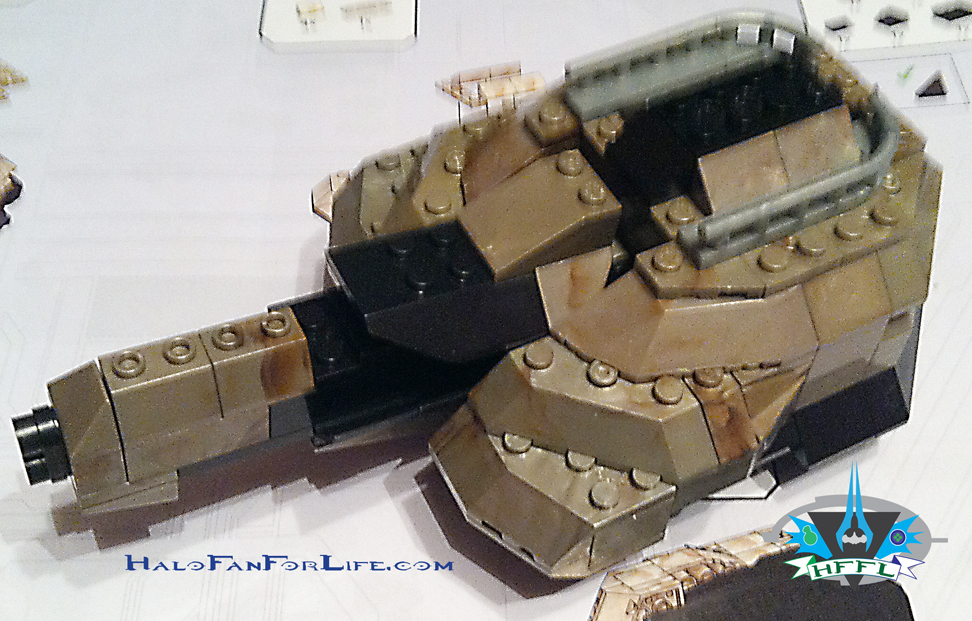 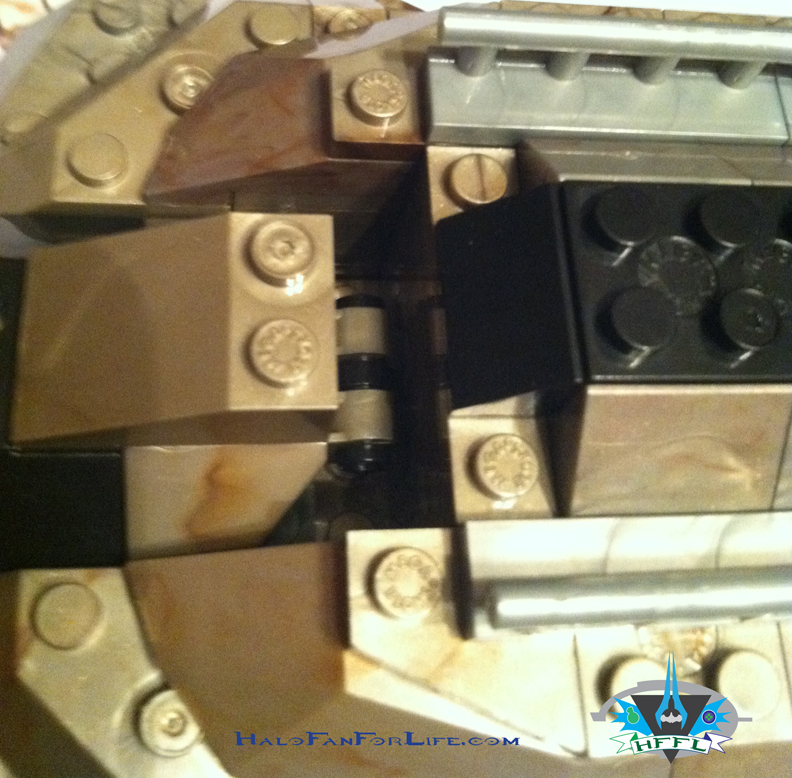 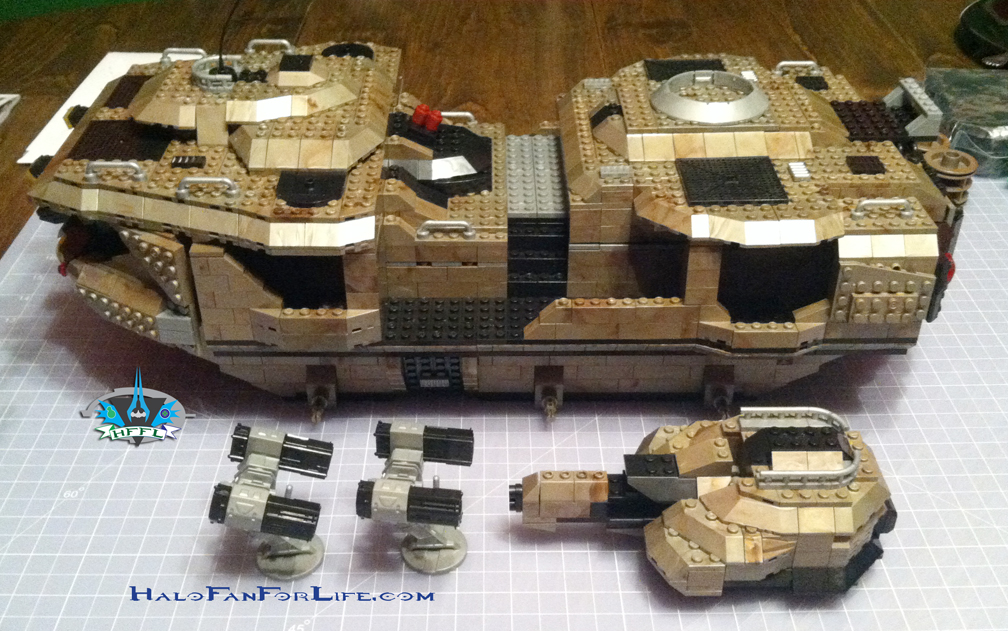 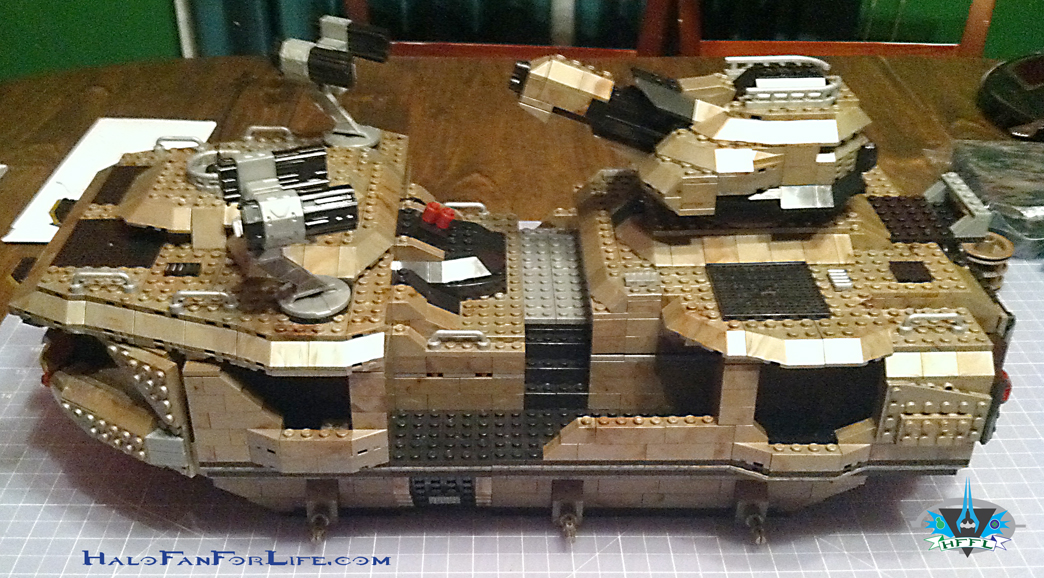 That turret really added some bulk to the top of the Mammoth! It’s almost done now. It just needs some mobility…. 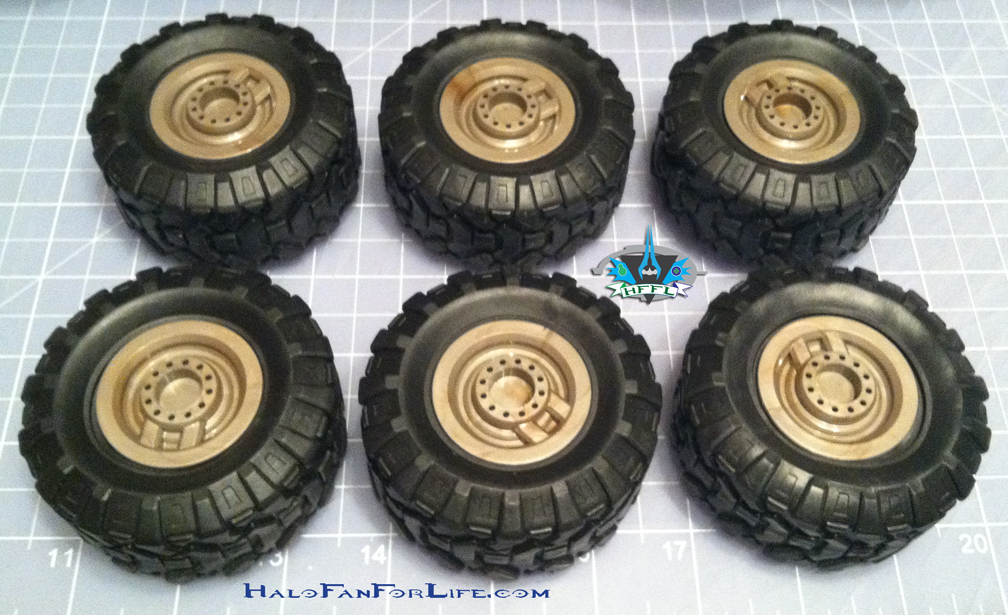 The wheels are the same as the ones with the Anniversary Warthog, except the hubcaps are of the Mammoth design. 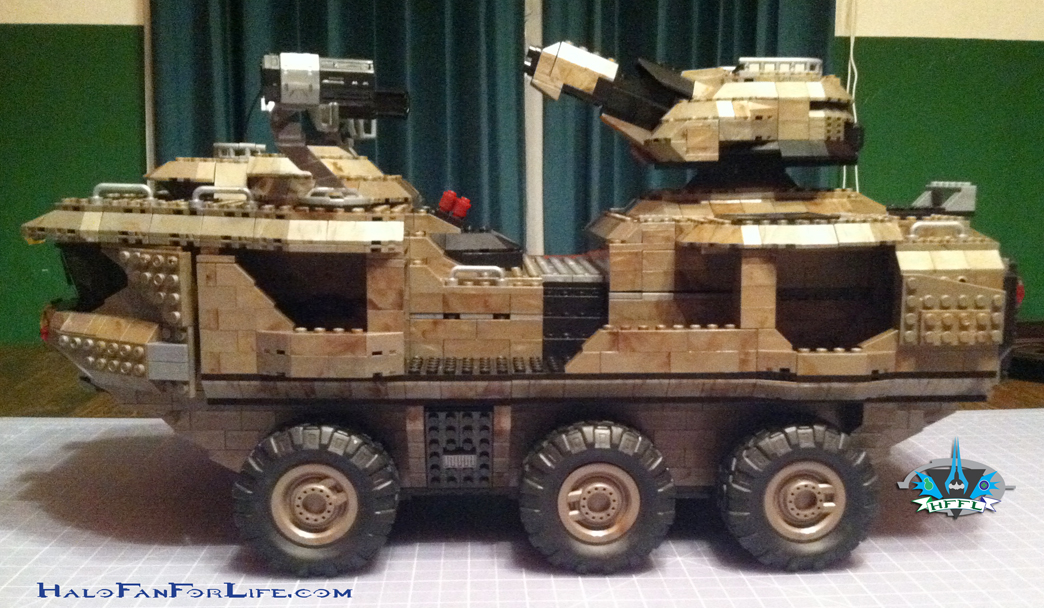 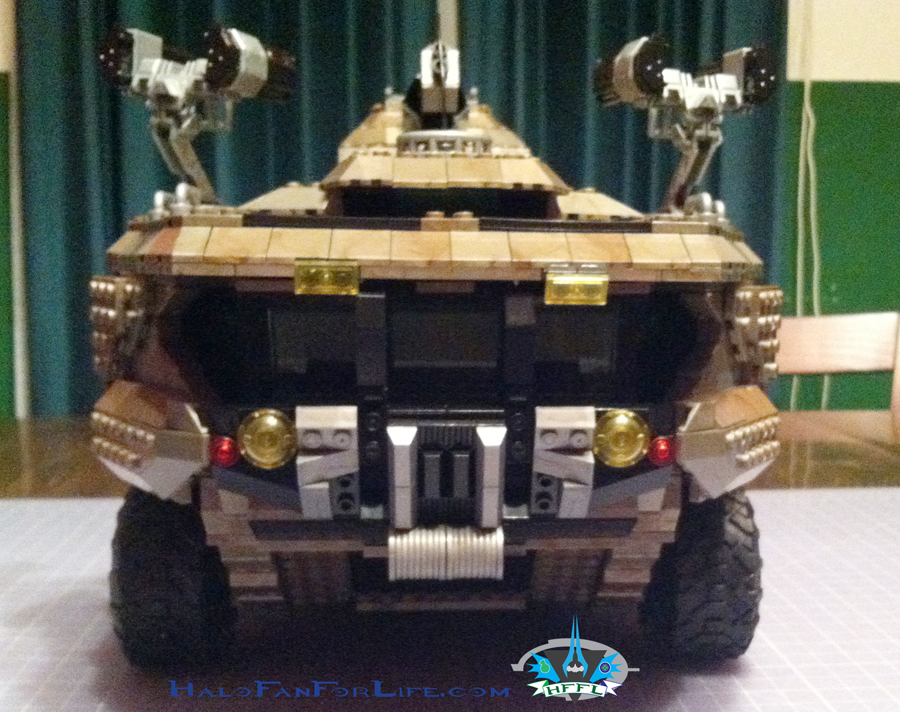 The front view finished. Wow, that command deck looks sweet. The tires add just a little bit of height, but they really do help to complete the model. 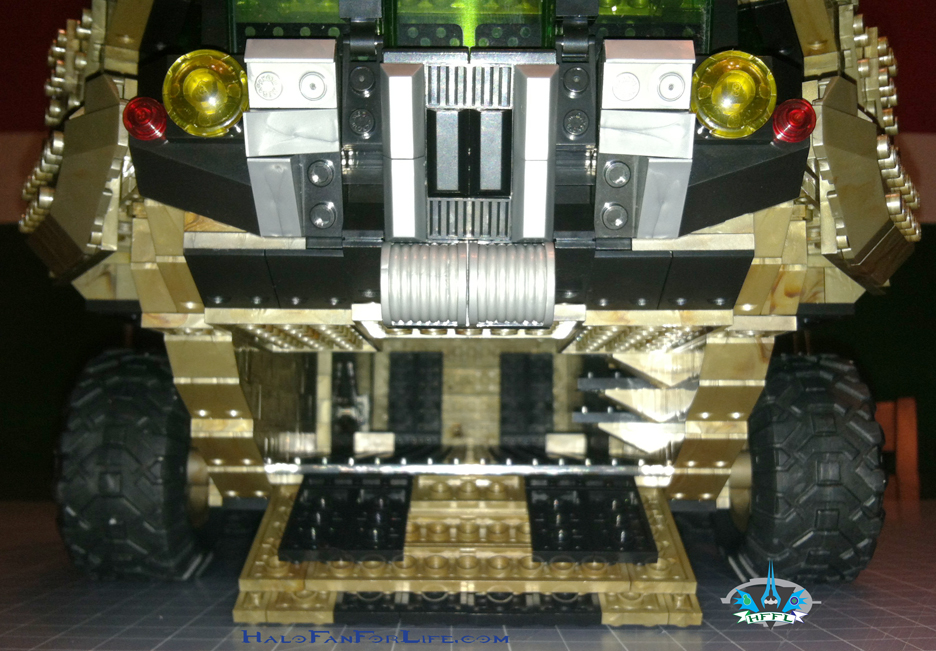 This would be the grounds eye view of the Mammoth if you were a minifig. You can see from this perspective how long the inside is. Also note the steps to the right of the pic inside the Mammoth. 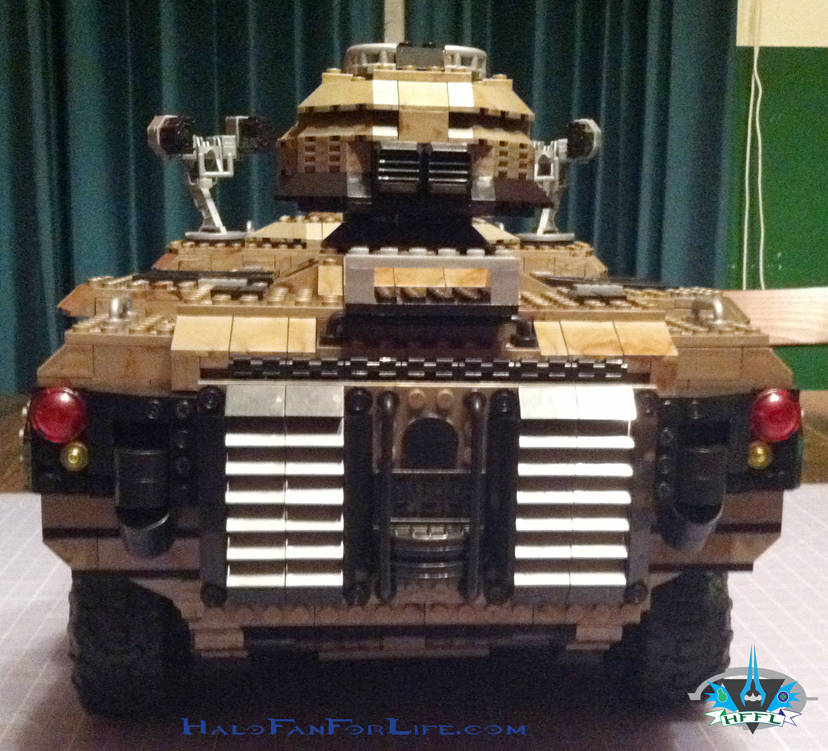 The back view. With everything complete the rear of the Mammoth looks powerful! I believe those are heat vents from the Mini-Mac. 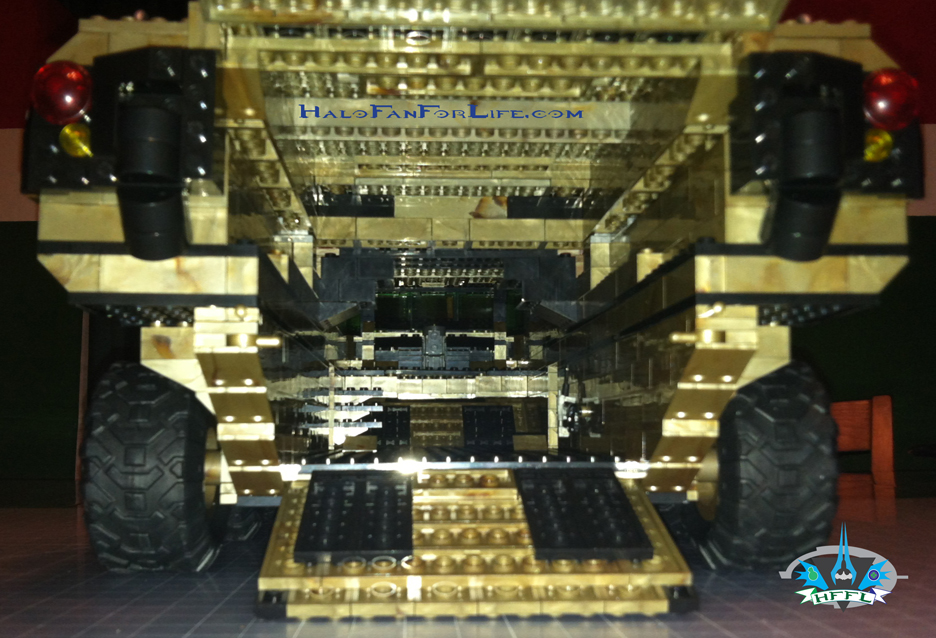 The is the shot from the back with both the ramp and the upper flap opened. Just look at how cavernous the inside looks from this perspective! Again you can see the steps, now on the left. And the Command Deck farrrr away. 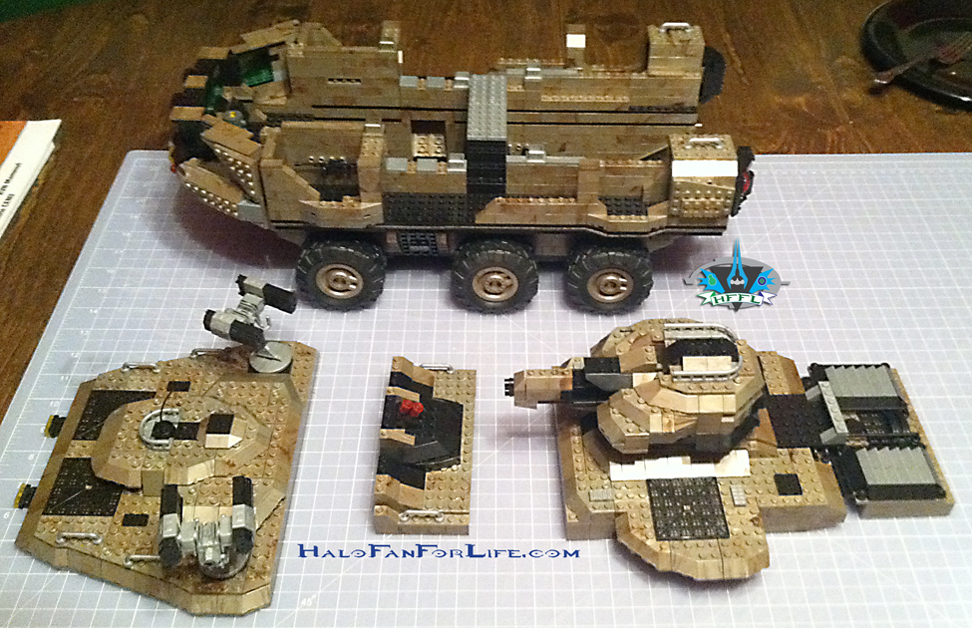 The pic shows the Mammoth with all three of the roof panels set aside. As I mentioned in one of the previous parts of this review, this set is MUCH more than a vehicle. It’s a WHOLE playset!

Here are the minifigs. From left to right: Commander Lasky, UNSC Marine (w/brown skin), Spartan Operator, Spartan Recruit. I had thought the two Spartans were going to be part of Fireteam Majestic. Unfortunately the armor color is dark grey and the visors are red. So clearly these are not Majestic. Sadface…. Then again, I can understand why MEGA wouldn’t want to do that. Imagine if you HAD to purchase this just to complete Majestic. That might irk some consumers. So I’m cool with it. Though, that Lasky figure is a huge draw too. Hopefully, he’ll be released in a future set.

Here’s the finished set with minifigs in place. 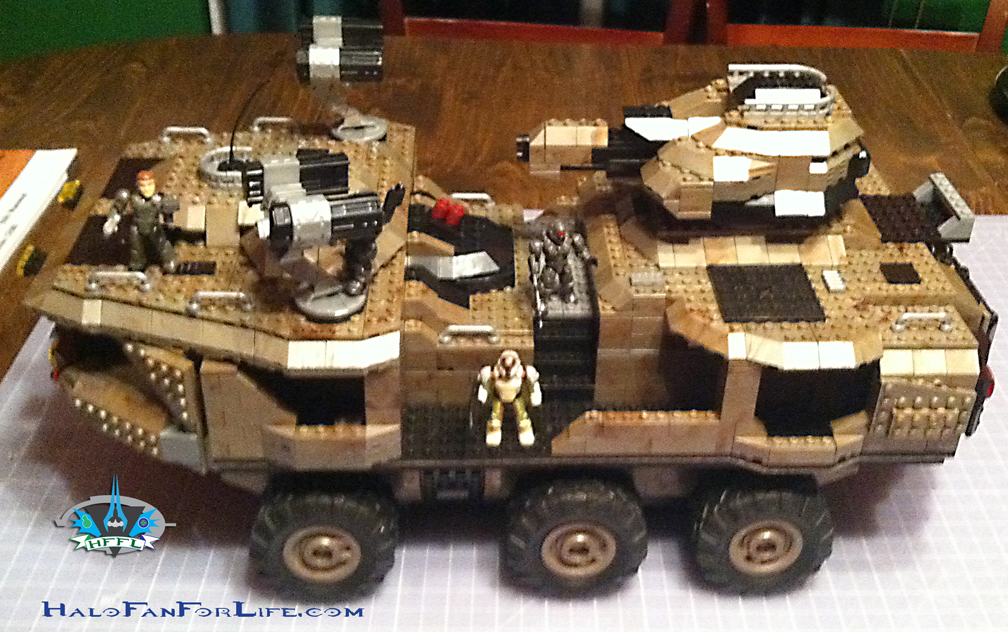 And finally for pics we come to the leftover parts.

As you can see there are PLENTY of part left over. Hmm, so what can I make with those??? 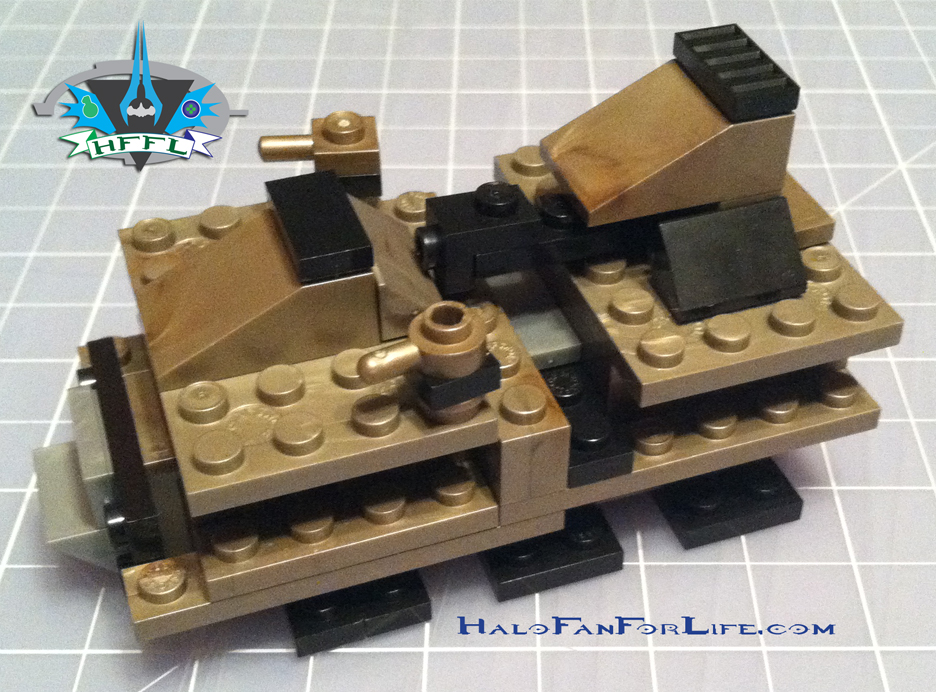 Why a Mini-Mammoth of course! (Well, as close as I could get to one with the parts left over.) 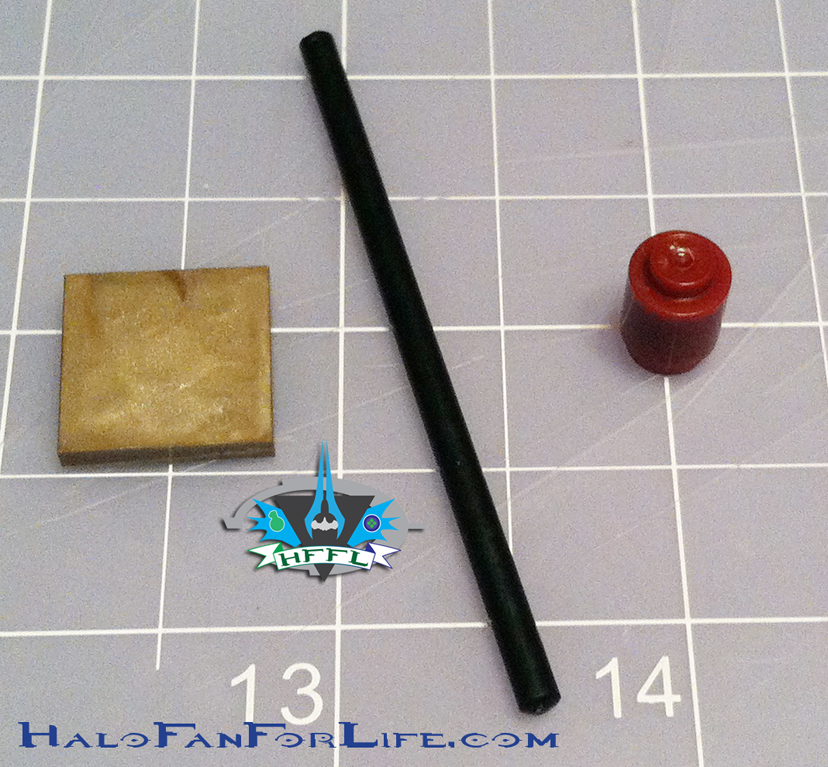 Only these three parts remained unused from the leftovers. I’ll probably put them inside the  Mammoth attached for safe keeping.

Whew, so that’s the whole build of the Mega Bloks Mammoth. Okay, so let’s get to some specifics here.

First, I know this isn’t to scale. However, does that bother me? NO WAY! This really is big enough. WHile it would have been awesome to have one to scale, it would have been MUCH bigger and much more costly because of it. To scale with the mini-figs, we would probably have had a $400+ model, rather than the $180 that it is now.
Speaking of price…I think it’s TOTALLY worth it! You get more than 2,000 pieces with this set (not to mention those extras). Factoring in my usual 10 cents per piece, the set should have been over $200. Instead we get a break of about $20. (Yes, this is all in U.S. dollars, sorry overseas folks). When you consider the Forward Unto Dawn (FUD) set from last year, that set had almost 2900 pieces and cost $70 more than this, I think we get the Mammoth for a great price. It’s worth it’s weight in value, in my opinion.
Now as to the inside not being accurate to the game, while I would have loved that, again, it would have meant the model would have to be bigger and again more expensive. I think MEGA found a GREAT way to bring this vehicle to market, even making those scale and accuracy compromises. I really will not fault them at all. This is an AMAZING set.
As to the figs, while I wanted more of them with this set and originally it was shown that way in a prototype shot, I’m fine with what is included.

The set is VERY sturdy. The only very slight issue for me was the back ramp. When I close it, I have popped off two thin plates. They are easy to put back on, so no worry. Just be aware of that, should you get this. Again, not a big deal. The model does have some weight to it, so I wouldn’t recommend it for small children. Use your own judgement there though.
I did have a couple of defective parts. As mentioned in other parts of the review, the Roland Dias wasn’t working, and there was that one defective part on the front roof panel. AS well, you may have noticed that my Mammoth doesn’t have any of the stickers attached. That’s due to the sticker sheet being damaged. I think some moisture must have got onto it somehow as my stickers were curling up off the backing. When I tried to place a couple of the stickers, they wouldn’t stay in place for more than a few seconds before peeling off. The remedy was to call MEGA’s customer service number and ask for replacements. I was greeted by a very nice lady by the name of Pat. She took my order for replacement parts with no issue. I should receive those in a couple of weeks. When I do, I’ll post a short follow up to this review to show the new pieces in place and working, as well as the model itself with all of the stickers in place.

So you’ve likely been asking, “How long did this take to build?” Well, I can say it’s NOT likely a one-sitting affair. Hmm, though if you start early enough in the day, maybe… I took my time with it and marked clear goals for each day I worked on it. Mind you, my sorting process is likely longer than most due to my stacking pieces. However, I believe that actually helps me in the long run of the build as I can count pieces out faster on the fly. So the sorting time is negligible in comparison to the rest of the build. All told, sorting time was 3 hours. Lots of big parts and bags that were filled with only one kind of part made this a VERY easy sorting process and relatively quick, considering the piece count. The building time was just slightly over 6 1/2 hours for me. The building time was split over three different days about 2 hours each, with the last day being the longest of the three at 2 1/2 hours. Again, comparing that to the FUD, that’s pretty quick as it took me 5 hours to sort those pieces and 10 hours to build the FUD.

I have to say that the Mammoth is absolutely my favorite MEGA BLOKS set to date and will likely hold that title for awhile. Only a very few other ideas for sets might top that. Those being a Scarab or the UNSC Infinity. We’ll just have to wait and see.

So how do I rate this? Well of course this gets a 10 out of 10 medals. Again, for the scaled down version and some structural changes from the in-game model, this is still an absolutely FANTASTIC set! I’m just glad (a family member that I’m not allowed to disclose-not my wife) got it for me for Christmas. I know I wouldn’t have been able to afford this otherwise. If you’re lucky enough to afford one, GET IT! If you need to think about it some more, pour over the 140 or so pics from the 4-part review I’ve done for this and think about it some more. This is SURE to become a valued set of Halo collecting in the future.

If you have ANY questions regarding the set, please feel free to ask. I think I’ve covered just about everything in the review, but I might have missed something.
Also, please let me know what you’ve thought of the 4-part review as a whole. Click reply below. If you haven’t yet registered, please do. Click the link in the menu bar above for directions on how to register.

Thanks for taking the time to read my review of the Mega Bloks UNSC Mammoth.
-Sal