Writer Drew Toal would have you believe so.

I got the link to this article from a fellow Halo fan, “Deino” and felt it needed to be further passed on to other fans.

Here’s the article in it’s entirety: 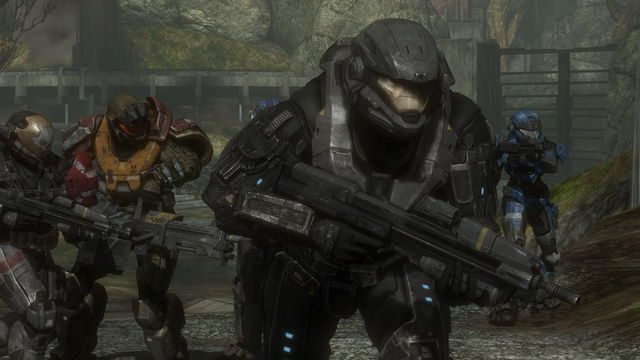 Whatever their veracity, stories of battles like The Alamo or Thermopylae are more compelling than stories where the good guys run the table with barely a scraped knee to show for their trouble. A small band of fighters facing impossible odds but never flinching in the face of their impending doom inspires in a way that Rambo’s seeming invincibility never could. On the contrary, these never-tell-me-the-odds types meet their maker with a devil-may-care grin and a song on their lips.

In this context, the story of Master Chief—the taciturn protagonist of the Halo series and the future’s genetically enhanced super Rambo—is about as dramatic as watching the Denver Broncos play football against my hometown peewee team, the scrappy yet hypothetically overmatched Absecon Blue Devils. Watching the Chief mow down wave after wave of palpably terrified Grunts is good for a laugh, but the outcome is never in doubt. And while he may not be immortal (this isn’t established, by the way), it’s pretty safe to say that he’s developed an immunity to extraterrestrial small-arms fire. Through four full games, the Chief has wiped out entire civilizations while barely breaking a sweat. Even when he’s presumed dead, you know he’s just biding his time, waiting for the next big-budget sequel and the next horde of bad guys to dispatch with extremely bland prejudice.

The developers at Bungie, the studio that originally developed the Halo series, must have felt some of this malaise, as the last Halo they made didn’t feature the indestructible Chief at all. Released in 2010, Halo: Reach was a prequel of sorts, and it laid the groundwork for all the recycled carnage that would come later. But Reachwas fundamentally different, and not just because it was missing the face of the series.

From the game’s outset, it’s apparent that at least some of your comrades are not getting off the planet Reach alive. The first thing you see is a Spartan helmet with a bullet hole through the visor, half-buried in the muck of Reach’s blasted surface. It’s to be a heroic death, then, with no sequels and no happy ending, the stuff of songs and stories. Whereas the Chief will eventually be sent to a Spartan retirement home where he’ll fight pitched battles over Jell-O cups and the television remote, the heroes of Reach will die as they lived—kicking ass and taking names. Thousands of years on, do we remember Leonidas, or the guy who eventually defeated the Persians?

As the newest member of Noble Team, a group of Spartan soldiers similar to but less implacable than the Chief, you find yourself on Reach in the immediate lead-up to the main series’ galaxy-spanning conflict between humans and non-humans. Whereas Chief is a faceless, violent cipher—you never see his face—each of the characters in your squad has personality and a humanity that feels alien to the series—so much so that it’s hard to square the notion that Noble Team and Chief come from the same unfeeling hero factory.

There’s no doubt that the Master Chief has been programmed to get the job done no matter the cost—that his life has no meaning outside the mission. When he first appears on screen, he’s being ejected from a test tube for that very purpose. The members of Noble are equally invested in seeing things through, but these ferocious killers have a more human side. They clearly care about each other—their interactions feel more like family than co-workers—and they probably have hobbies outside of the oncoming xenocaust. Within the first few minutes of Reach, you learn that your character is replacing a recently deceased Noble member, and not everyone is pumped to bring in the new guy. Your commander has read your heavily redacted file. “We’re a team,” he tells you. “That lone wolf stuff stays behind.” Clearly, the “army of one” tactics of the Chief wouldn’t fit in too well with this group.

It turns out they really do need one another, because Noble Team is much less bullet-resistant than the lumbering Spartan man-monster we’re used to. As you fight your way across Reach and the scale of the invasion is slowly revealed, your comrades are whittled down. On a covert mission to take out a giant alien battleship, not everything goes according to plan. Somebody has to stay behind and manually set off the weapon that will destroy this space-invader leviathan. As the newest member of Noble team, that duty doesn’t fall to you. Your character will live to fight another day—or at least a few more hours. The same can’t be said for your buddy Jorge, who with his last breath sends those alien bastards straight to alien hell. He’s the first to die but certainly not the last, or even the one who suffers the most heroic death. When they made these Spartans, they must have spawned them from a DNA cocktail made from the genes of Audie Murphy, a lion, and Bruce Willis from Armageddon.

Only one member of Noble doesn’t get to choose how she dies. In one of the game’s more sudden and unexpected moments, the team’s single female member falls to a sniper’s bullet mid-sentence. Just like that, she’s gone. The moment is profound for a number of reasons besides the sad piano music. There’s nothing you can do about it. It’s an act of God, pure and simple. These games, the first-person shoot-for-all variety, almost always put you behind the scope of a far-off sniper rifle at some point and ask you to pick off helpless victims—soldiers, aliens, or civilians of a irreconcilable ideological bent—from a hidden perch. These are moments of extreme empowerment. The lives of distant targets are yours to extinguish with the mere pull of a trigger, and they are completely unaware. To suffer on the other end of that transaction is jarring. Your buddy’s death feels ignoble, and the means of her demise feel dishonorable. In that moment, these super-soldiers know what it’s like to be powerless. She’ll be the only one to endure such a fate.

As the game ends, the remaining members of Noble Team escort a group of scientists and important artifacts to an escape ship. But somebody has to stay behind and keep the aliens off their back in a desperate rearguard action. Noble Team fights valiantly as they’re swallowed up by waves of attackers. Your squad’s commander, riddled with bullets, crashes a ship into an alien craft to buy you time. Another gets a plasma sword through his back as he mans a gun to cover the escape of the Pillar Of Autumn’s, the ship from the original game that carries a still-hibernating Master Chief. (In Reach’s final scenes, there’s a split-second where you can see Master Chief in his cryogenic sleep chamber, right before he awakens to the events of the first Halo game.) It raises the question: You guys couldn’t have woken him up for this fight? Does he need his beauty rest?

Apparently not, and Master Chief’s absence neatly encapsulates the divide betweenReach and Halo proper. Master Chief is a product of science, a thing to be preserved at all costs. Your character in Reach has other plans. When presented the opportunity to escape, your fighter chooses instead to delay the enemy, thus allowing the survivors to slip away. Before the ship lifts off, the Admiral tells you that Noble Team’s sacrifice won’t be forgotten. He’s right. While the Chief is busy getting his 40 winks, the soldiers of Reach calmly stare down oblivion and fashion a legend, making their brief existence all the more memorable.

HFFL: Okay, so what do you think. The writer gives a compelling argument. Yes, I know nothing will ever truly replace Chief. Most of Noble do die a heroic deaths, but is that enough to say they outshine Chief?

Jorge’s death bothered me. He was my favorite of Noble and a fellow Spartan II like Chief. He made a call and did die very heroically.
Kat’s death was ridiculous. One snipe through the helmet?
Carter’s death seemed a little needless. Somehow he was riddled with bullets, yet I know we didn’t see that.
Emile’s death was a bit cocky, as he was. He didn’t have a choice though as he was snuck up on. Honorable, but didn’t outshine Chief.
Jun got away….
and finally Noble Six. Did he really need to stay on Reach? No, I think he could have gone with Keyes. That would of course changed the story. He did die honorably, but again, I do not think he is better than Chief.

Let me hear/see/read your opinion on this. Hit that reply link and give me your thoughts on this.
-Sal

5 thoughts on “Does Noble Squad outshine Chief in Reach?”