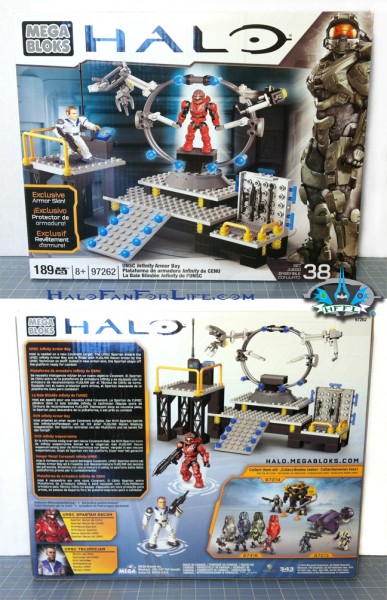 The box shows the Armor Bay quite well. Nothing is wholly obstructed from view. 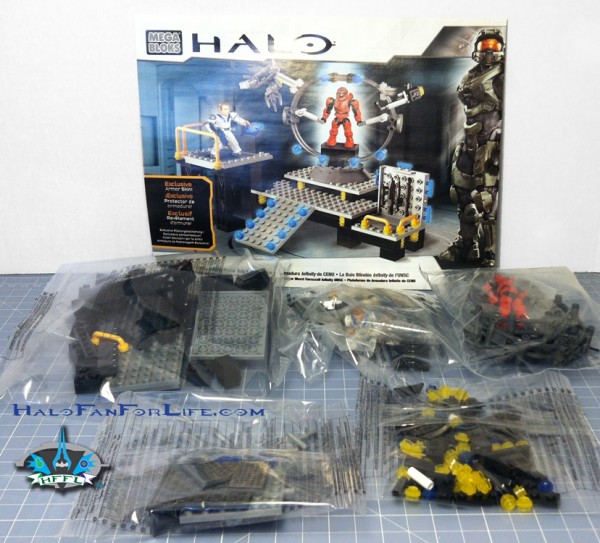 Here are the contents of the box. Lots of small pieces, so be careful when you’re opening the bags, so as to not lose parts 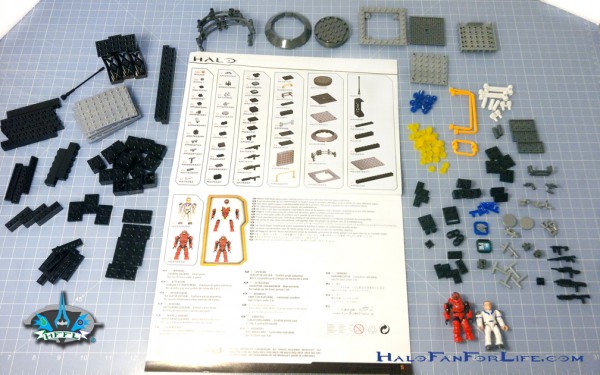 The pieces sorted out. 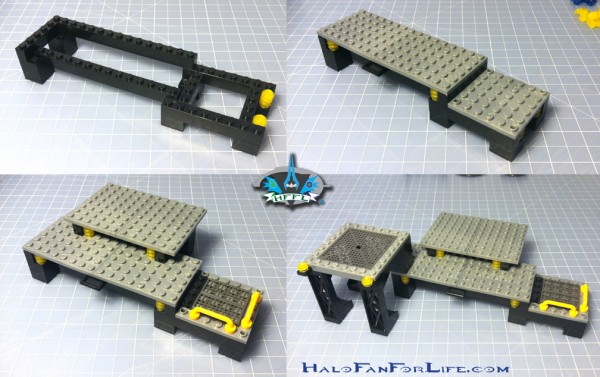 The base of the armor bay takes shape.

Now at first glance you might think this is the same pic but at a slightly different angle. Turn your attention to the large yellow guard rails to the left of each pic. The left side shows how the directions say to place them, while the right pic shows how it’s placed on the packaging art. Personally, I prefer the placement in the right pic. Makes more sense to me.

A ramp is added, then the “gantry” starts to take shape.

Here’s the set complete with figures in place as well as the weapons locker attached. I’m not sure what those blue double pegs are on the locker. Doesn’t matter though. They don’t take away from the set. 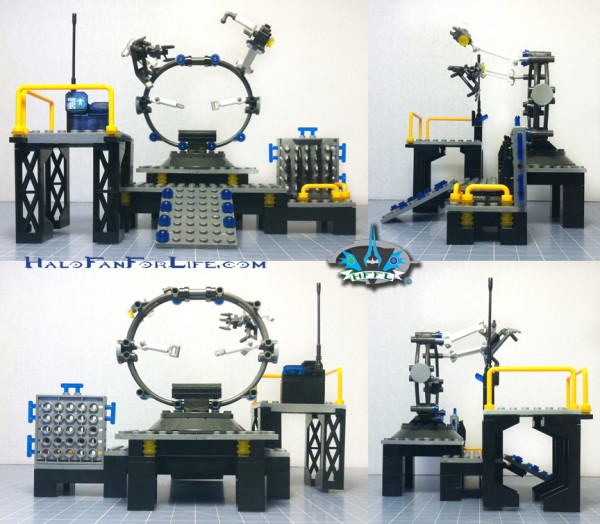 Orthogonal vies of the set. I made a mistake when building this. Note the bottom right corner, that piece is floating off the building table. I realized my mistake at the end when I had a piece that perfectly fit into place.

Here, circled, is that piece put into place. Now that part of the stand is flush with the table. Heh, yes, I can make mistakes when building and am not afraid to admit it…

Here were the pieces left over, again, the 2×3 plate was the part that I skipped by accident. So it’s really not leftover. 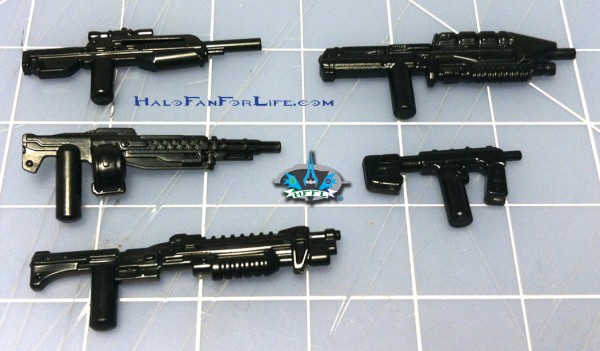 A really good sampling of the weapons that come in this set. I much prefer solid black to any other solid color UNSC weapons (except the Spartan Laser). Pictured above from top to bottom left column, then right: DMR, SAW, Shotgun ; AR, SMG

Here’s the technician figure. I’m glad we’re getting more tech figs. Though it’s not accurate to the game, it’s still nice to have another one.

Here’s the Spartan with the special grey markings. The markings do not exactly follow any of the specific skins in Halo 4. However, I totally dig that MEGA added the secondary SKIN color to the fig. It stands out. That said, this would have been a great opportunity for MEGA to have included the base spartan model as seen in the campaign. That one is Recruit armor with dark grey as the primary and orange as the secondary. Since many of those are seen in the campaign, it would have made that an army building figure. Doing that would have also made this set a multi-purchase for more people who like to army build.

On that note, While the design of the armor bay is nice, it’s not conducive to having many of them as it takes up a bit of room. So….I made a custom version of the armor bay with just the pieces from this set that much more closely resembles the in-game version.

Here are some comparisons shots from Halo 4 as well as my custom build:

The first thing that stands out is that the gantry arms are not attached to the ring, but rather to the top of the structure. As well, the whole thing is flush with the floor, not stepped as Mega’s design is. 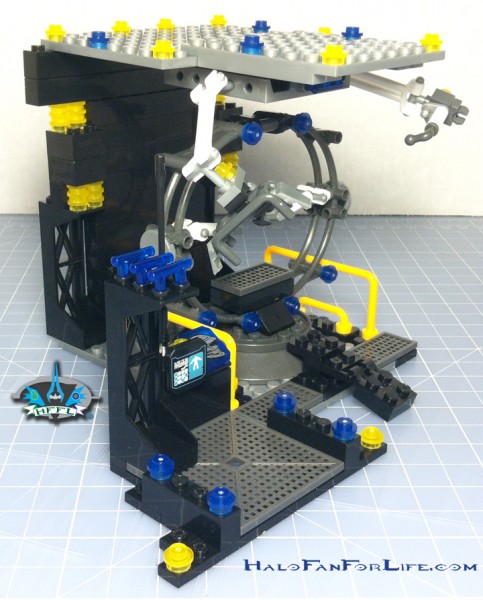 So here is my alternative. Again, this is made from just the parts from this set, so you can easily make this version. 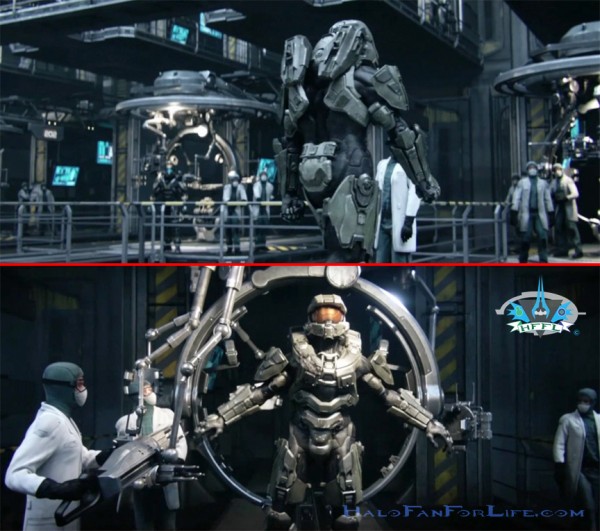 Master Chief looks on at other Spartans getting the armor treatment before having his own removed. 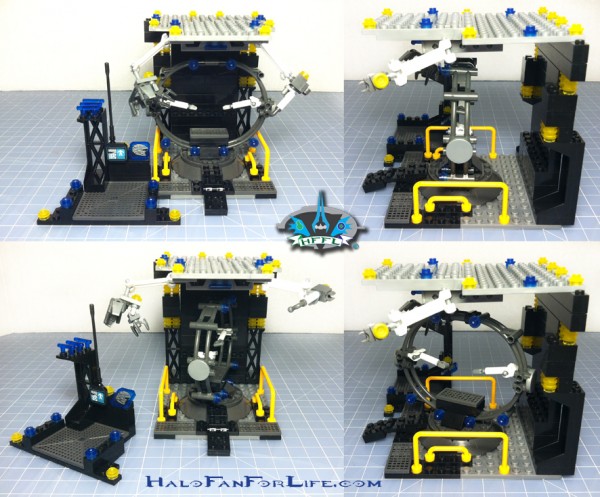 Here are some alternate views. The left top side shows the tech station to one side, while the left bottom shows that it’s modular and can be repositioned. You can put it on either side of the bay. The right side top shows the distance between the gantry and the back wall, while the right bottom shows that the gantry indeed does clear the wall and can spin 360° without hitting it. 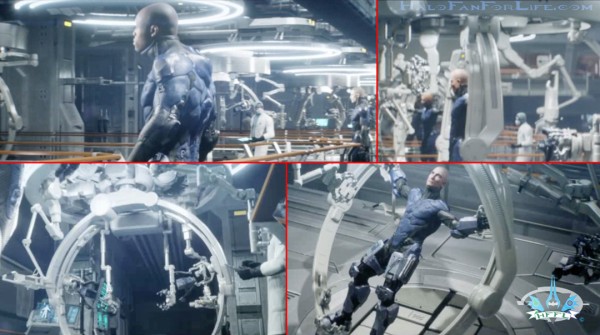 In Spartan Ops,the Armor Bay is more clearly defined and better lit. Here you can definitely see the placement and positions of the assembly arms. 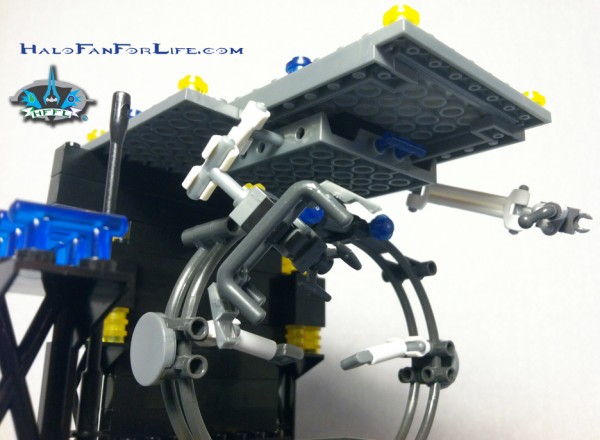 So, I used the armor locker piece along with the three 2×3 plates to attach to the top of the roof. That locker piece has some nice holes on the side that you can add the armor assembly arms.

What I like about my redesign is that it’s smaller, modular and you can place many of them next to each other with the tech stations in between, thus making a long armor bay, with more spartans getting their armor put on or taken off. Yet, it won’t take up a ton of room.

Summary: This is a quick build. It’s a bit grandiose in the design. That’s not a detractor mind you. Just that it takes up more space than it needs to. The articulation on the gantry as well as it’s ability to spin 360° are some very cool features!

Overall Rating: I give this set 9 out for 10 medals. While I like the special skinned Spartan, I’d have preferred the generic Halo 4 campaign version as it would have meant multiple purchases for me. I will still likely get a few more of this set if I can afford it. I’ll just have to trade that Spartan out. The large area it takes up is what drops this down a point. Normally I love large sets. This is one time where smaller is better.

This all said, I still HIGHLY recommend it!

You can see this set and more at Mega Bloks Halo product page HERE.