The minifigs included are two flood infection forms, one purple elite minor, and the arm and head of an elite flood form.

This is a good set if you want to do a little army building, especially of those little flood infection forms. I am missing one of the little clear pegs to attach it to the clear base, but I’ll get that from Mega through their customer service line.

The value of the set is good, almost great, IMO. The only two things I would have changed to this set were the color choice of the elite to be the correct blue in-game color, and a different weapon for the Elite. Why Mega insists on a plasma pistol for the Elite, I don’t know. At the least it should have a plasma rifle. That’s a small knock though, nothing huge.

Overall Rating: 8.5 out of 10 medals. It would have scored more if it had been game correct in color, as well as the plasma rifle instead of the pistol.

And now onto the pic:

Just one, however, it’s a composite of everything in the set. 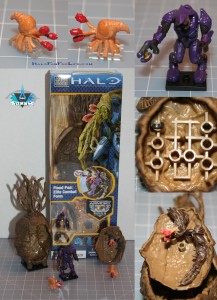 It really is a nice set. Though I’m tired of the pods, this one is so very different from the rest that it’s a welcome addition to the collection. The flood infection forms add value to the set, as do the flood extra parts for the Elite.

If you’re a fan of the pods or Flood, this is a must have set.