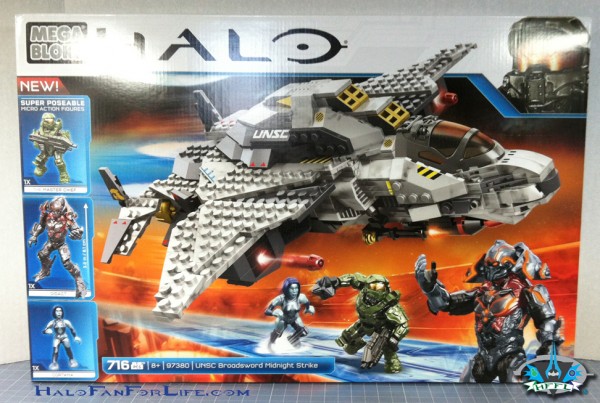 The box art is well done. The Broadsword is shown nicely, while the Figures are given their space as well. 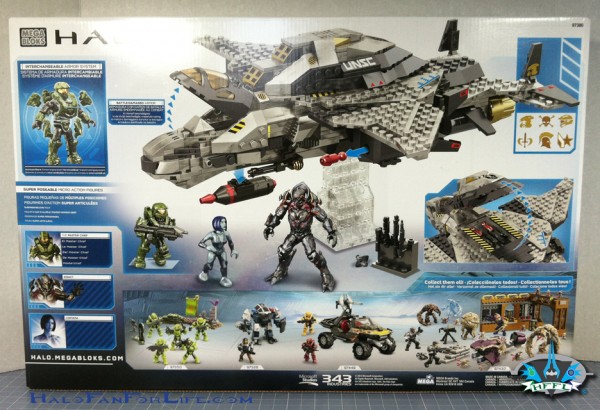 The back of the box has many details. Along the bottom are some of the news sets.

The above pic shows the detail of the Master Chief figures and how his armor is removable. 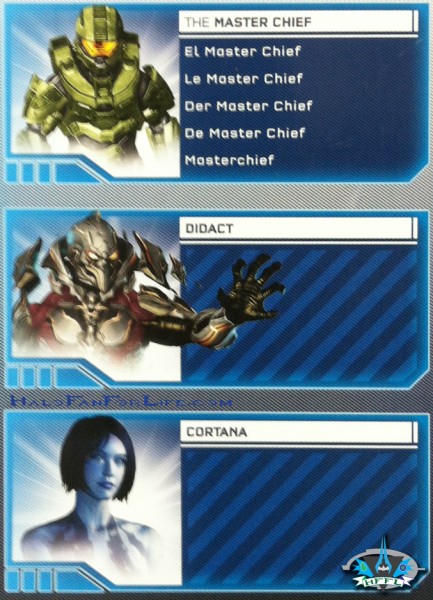 The pic above shows the three minifigures included with this set. 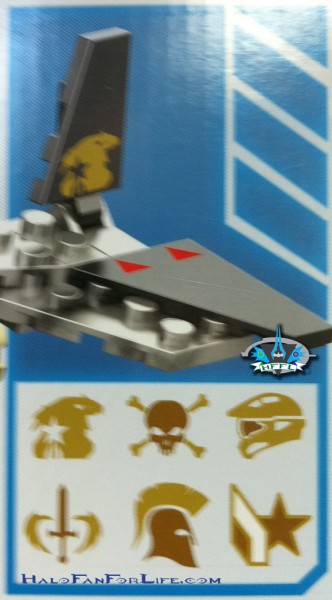 The only error I saw in this whole box and build was the emblem with the sword/wings. It’s called “Valkyrie” in the game. It’s upside down on the box. Believe me, I know as I use this logo as part of the HFFL Gaming Group logo. 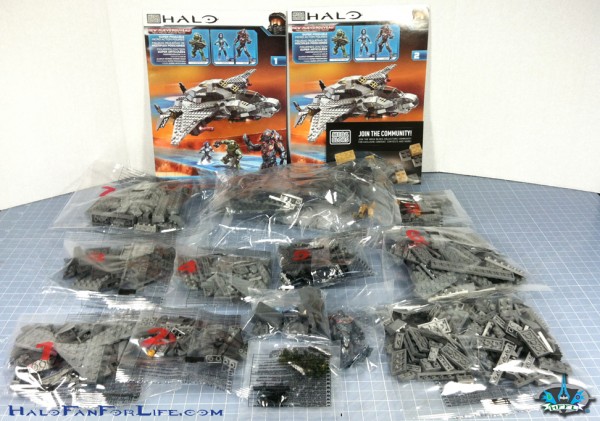 The contents of the box. Many bags had numbers on them. However those numbers do not mean anything for we builders. I suppose they are there for the factory workers to make sure each set has the right bags in them. 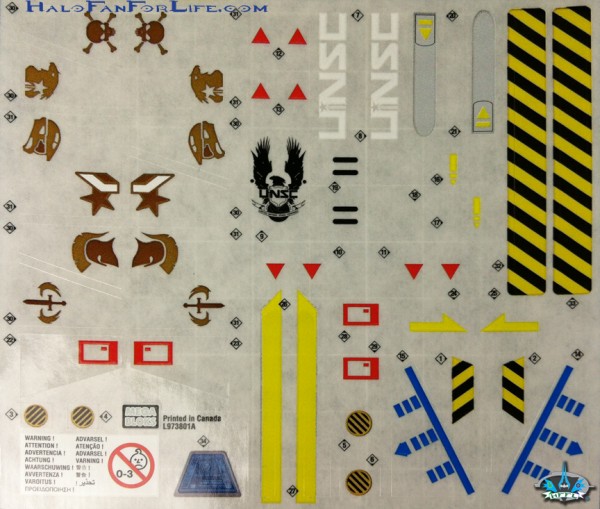 The sticker sheet included. For once I actually use the stickers!!! 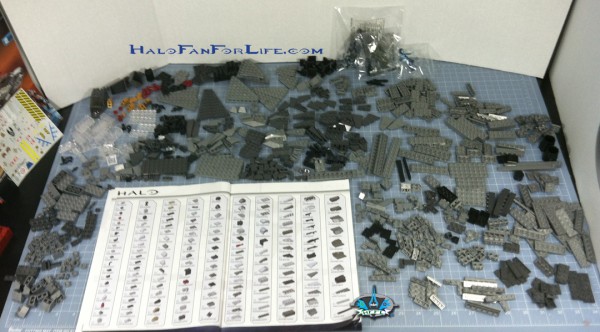 All the pieces sorted out. Whew, it took an hour alone just to sort these all out. 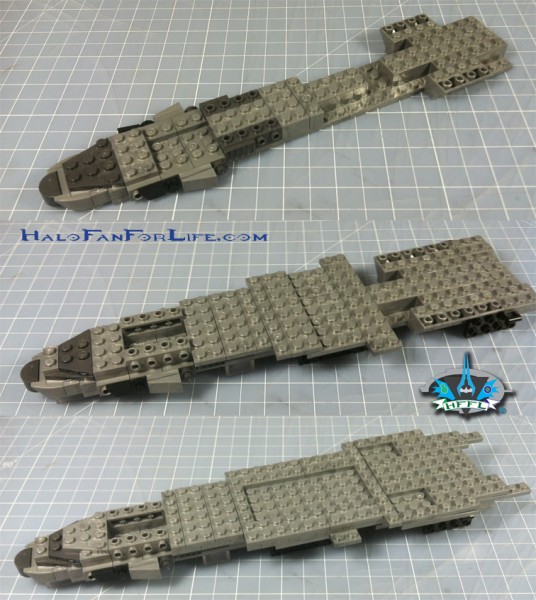 Above are some of the early steps of the build. It’s the lower portion of the main fuselage of the ship. 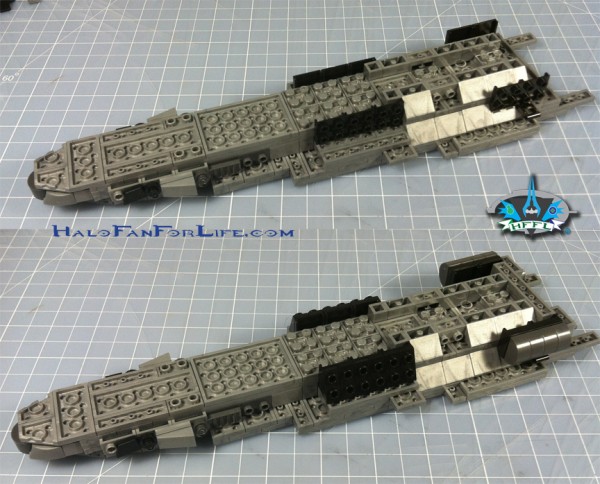 Here we see some detail being added to the bottom of the model. But wait…It gets MUCH better!

More steps of the fuselage coming together. The bottom left of the pic shows the intake assembly, bottom right shows it attached. 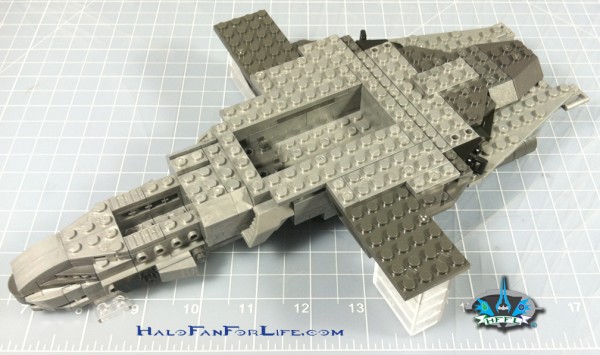 While nowhere near complete, you can already begin to tell that this is a flying ship of some kind.

The wings get a lot more added to them to help them take shape.

On the top of the model at this point we add in missile and weapons storage. This is a very cool addition to the model and adds to it’s playability. 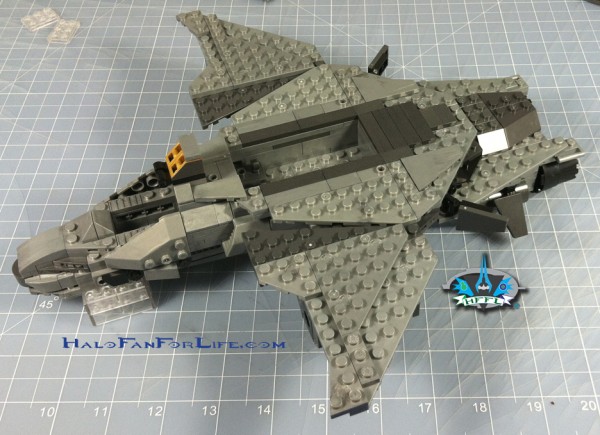 Some rear flaps are added, as well as more of the cockpit is put together. 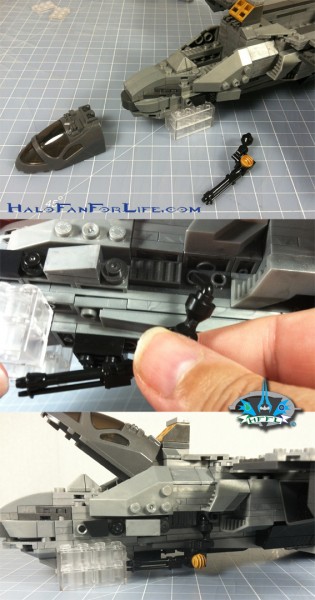 The forward gun mounts are added. The design of these is pretty ingenious. The way they pivot and move forward is fantastic. The cockpit hatch is added. 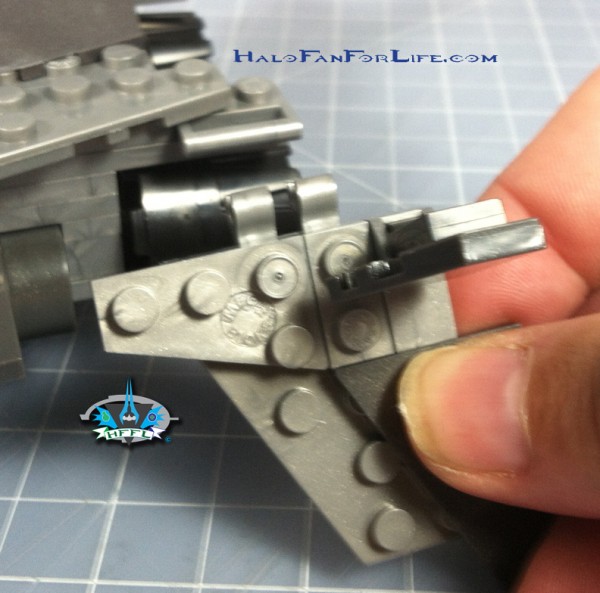 The step above shows the tail wings/fin assembly and were it attached to.

The is the nuclear device that attaches to the bottom of the ship. It’s removable. 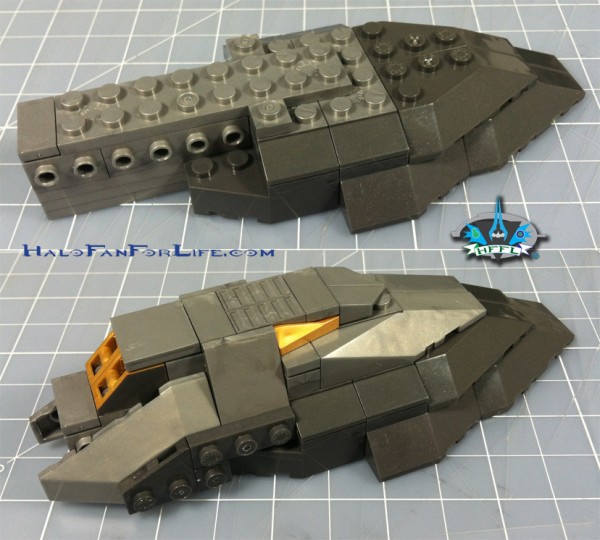 Above shows the top section of the ship that can be removed to reveal the missile and weapons storage. 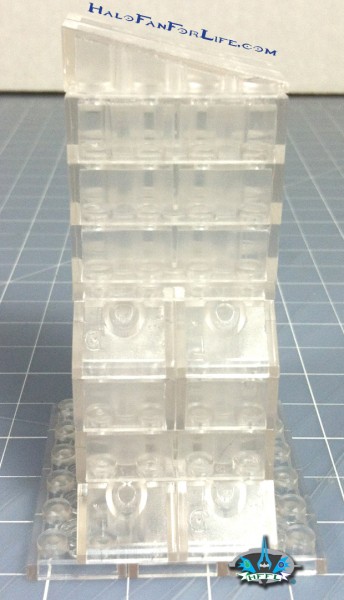 Mega made sure to give us parts for a sturdy stand. These clear pieces do the job nicely! 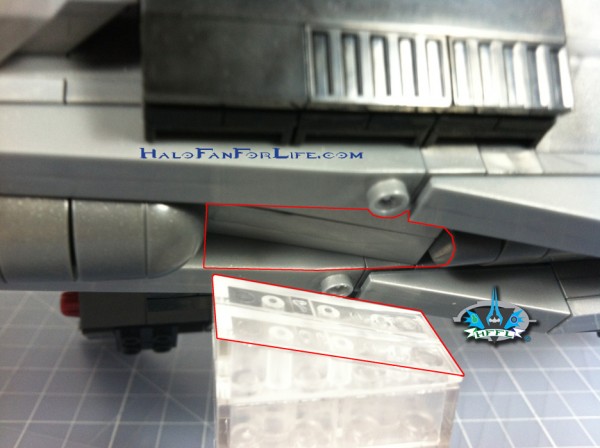 The outlined ares show where the ship rests on the stand. When you put it on, the ship is parallel with the surface you have it on. NOTE: If you remove the two clear slope piece, you can make the ship look as if it’s pointing downward. Try it!

Not to many leftovers in this set. I couldn’t even make anything good out of them. So into the parts bins they go.

The Master Chief figures that comes with this set is excellent. It has the new articulated shoulders and elbows as well as removable armor. 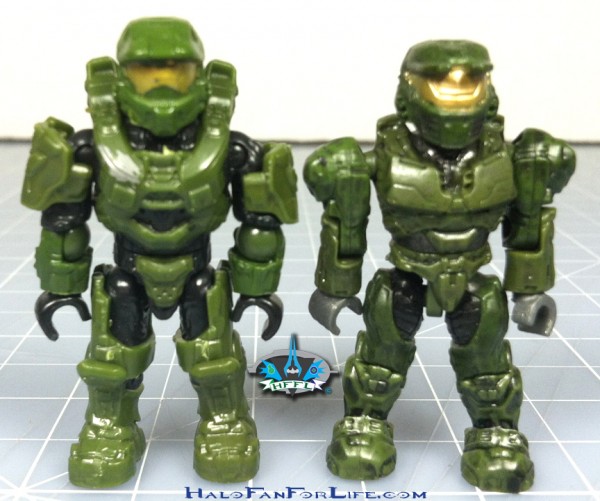 The pic above shows the difference in size between the new style and old style Spartan. There is not much difference at all. The little bit of added height is perfectly fine by me.

This is only the second time we’ve had Cortana as a mini figure (not counting the micro statue version). The one above has a nice solid paint to it. The deco is really well done. It’s amazing how they can get detail like this on such a small figure. 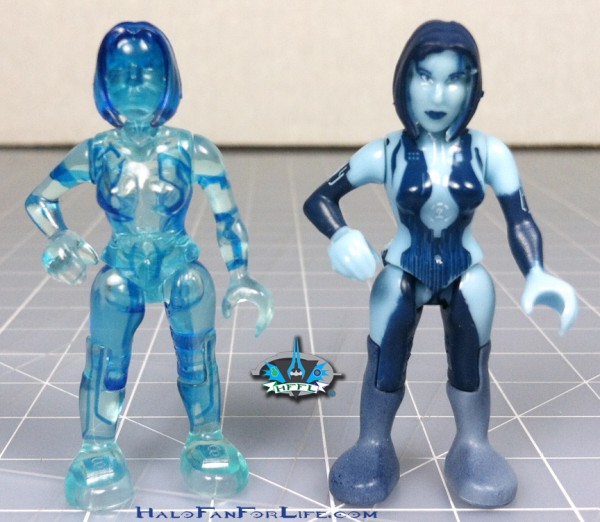 Compare the first version of Cortana with the one included with this set. Which do you like better? And why??? 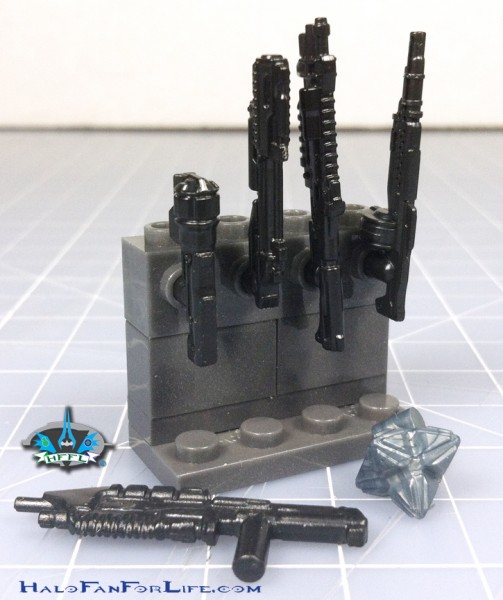 The MIGHTY Didact! This is a SWEET figures. VERY detailed and has all the standard articulation. This is another pic you should clock on to see the detail better. 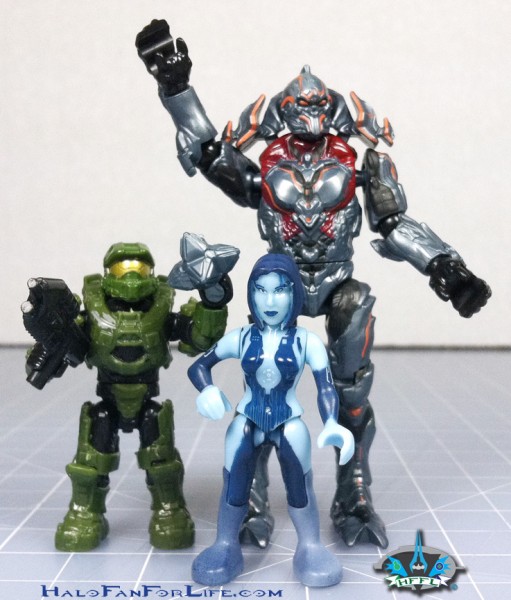 Or better yet, this one. See the size difference? The Didact is MASSIVE by comparison, as he should be. He was after all 13ft tall. 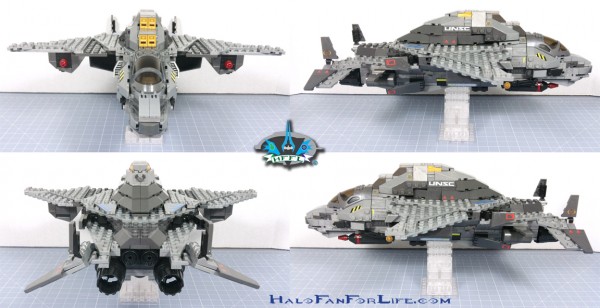 The finished Broadsword in orthogonal views. 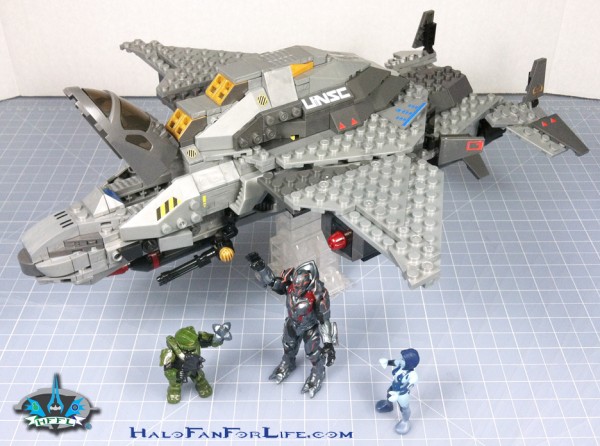 And here is the full set. It’s amazing just how many moving parts the Broadsword has. The figures are so VERY well done.

Summary: This set is a long build, clocking for me at 1 hour sorting and 4 1/2 hours building. I put it together in one sitting. Though, I’d suggest it as two sittings. This is NOT a beginner build. So young children should have the help of their parents with this set.

It’s hard for me to pick what I like most about the set. The ship is great, the minifigures are all great. For once I think I can’t pick a favorite part of a set.

Overall Rating: I give this set 9.5 out for 10 medals. This set has some complex steps to it. It’s pretty sturdy except for some of the wing flaps which  may come off if you hold the ship an incorrect way. Other than that, which is minor, this set is a complete WIN!

I did make a couple of mistakes along the way. Those being using lighter color grey pieces when they should have been darker. That said, the directions were much better than in previous sets. The treys pieces in the directions were a lot easier to tell the difference with in this set. I was just excited to have the set and wanted to build it quickly so I could get this review out. So I made those little errors (which I did go back and fix).

The price for this set is around $70. As I mentioned at the beginning of the review, I got this at no cost from Mega Bloks. For the piece count at 716, plus a NEW style spartan AND the Didact large figure, this set is worth the price!

I highly recommend it. I’m not sure if the Didact will be made available again, so get this set while you can.

[UPDATE] A few fans asked me for pics of Chief in the cockpit as well as the foot holes of the Didact. I shot those and also included a mic Promethean army shot that shows the size of the Didact in comparison to his troops.

As you can see, Chief fits in the cockpit snugly. No need to take off any armor for him to fit. And the cockpit hatch does indeed close with him inside of it. 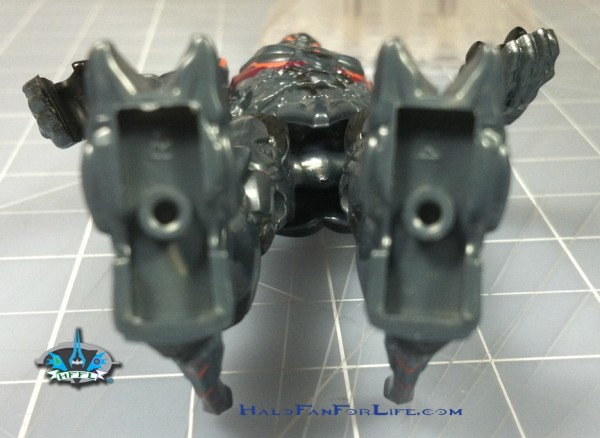 The Didact’s foot holes are 2X1 studs, just like the Promethean Knights. Speaking of…

Here is much of my Promethean Army. Not included are a few other Watchers Orange and Blue, as well as all of the Blue Crawlers I have. As you can see the Didact stands a little more taller than the Knights, as he should.