First let me open up the article by saying, my wife is a true dear. She ordered half of these sets for me from Toys R Us. The other half were found on Friday night with my bud and fellow HFFL gaming group member Dijabouti. (And of course my wife paid for those too.) 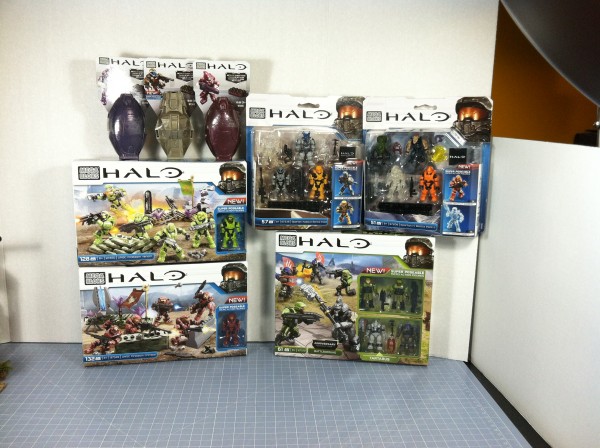 The ones she ordered for me were the 3 drop pods, the Tartarus set and the two 4-packs.
Those came in the mail on Saturday while the LAN was going on.

The previous night, I had picked up my bud Dijabouti at the airport (he came up from Fort Worth, Texas to be at the LAN). We stopped at one of the Toys R Us along the way. I didn’t expect to find anything as I hadn’t seen much in the two weeks prior. Lo’ and behold though, there were both the Fireteam sets. As well, (not pictured) were some of the Alpha Series of minifigs.

My wife again surprised me by buying these for me. I mentioned previously that she got a bonus from her work. Apparently it was a little better than she let on at first. So these were given to me as birthday gifts, even though my birthday is a couple weeks away.

Fellas, if you find a woman like her, MARRY her! Emily (my wife) completely understands my collecting habits as she herself was a collector. Plus, she also knows that I love doing toy reviews of these sets, so that’s an added benefit.

Speaking of, you’ll see these and a few more from sets she got me a week ago. In total, I’m going to have 11 sets to review for you folks. I’ll be publishing one or two a day over this week, so keep coming back to read up on those and make an informed decision about your purchase.

3 thoughts on “I had a huge score of Halo Mega Bloks over the weekend!”