This is yet another one of the gifts my wife got for me for my birthday.. She knows me well, LOL.

The front box art has a cool action scene on it. Though the cyclops seems to imply there is another figure within. 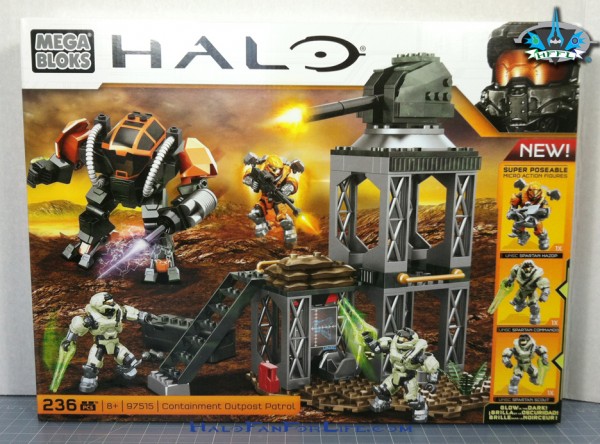 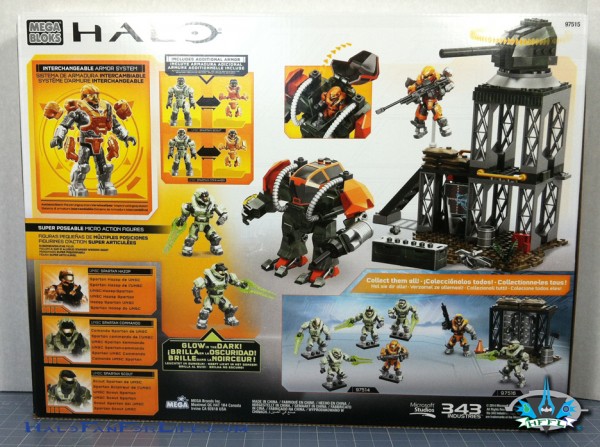 The back of the box not only shows the set within, but the other two Containment sets. I have previously reviewed the Armor set HERE.

The contents of the box. There is a bag (near left) that has only two pins in it. This is because there are two other pins that are too large for the set that were included. Someone caught this at MEGA as was able to get the smaller two pins into the set. Watch for this in your set. If you do not get the smaller pins, contact Mega’s customer service and they will happily get the parts to you.

So here are the pieces sorted out. It’s a good mix of green and grey parts. I particularly am happy that there were so many of the beams included. These will make for some great parts for a diorama, should you choose to use them as such. 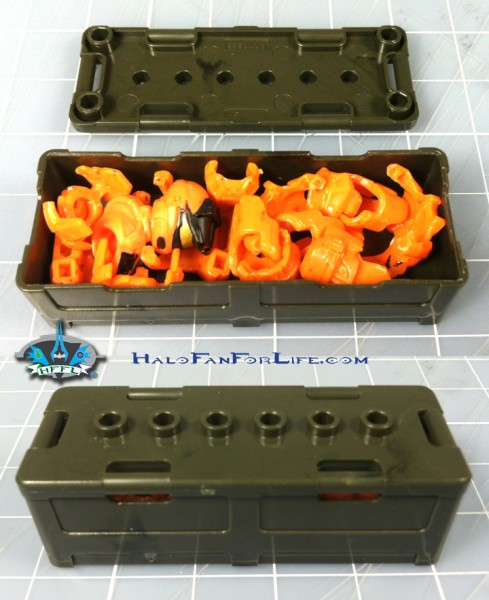 There is a armor crate included and it’s just big enough to hold two extra armor sets. As you can see here, I’ve placed the two extra Orange sets within and it closes completely. 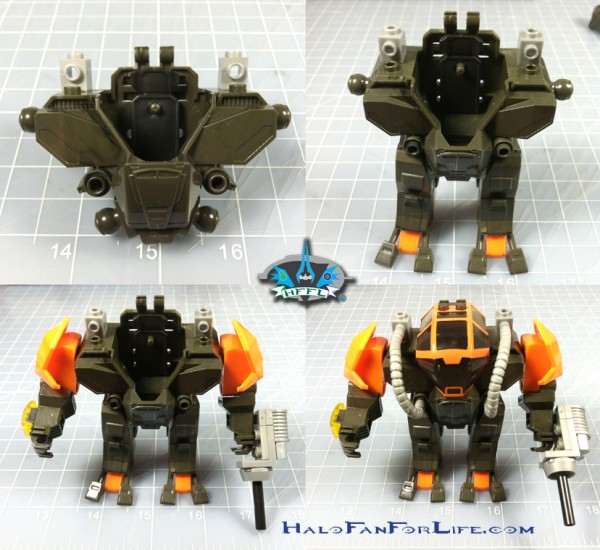 Next up is the cyclops build. Other than the gun and hoses, it’s the same design as the previous 5 other cyclops variants (Not included the new NMPD cyclops as well). I had originally thought this was a black and orange cyclops, not a green and orange one. SO I disappointed my self there. Personally, I think black and orange would have been better as they are the coolers of Halloween and given the zombie theme to the set… 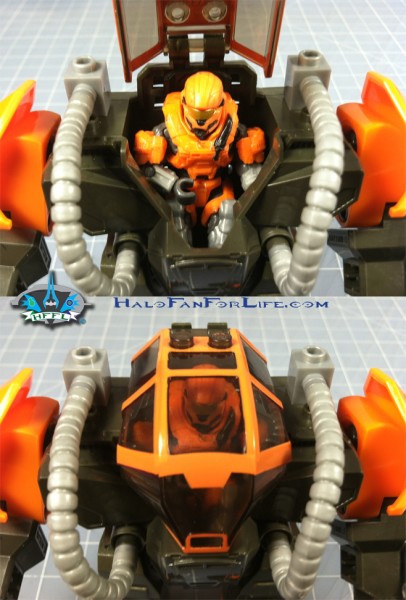 The cockpit holds the new style spartan just fine, though it’s a little bit of a tight fit. As you can see though, the cockpit does indeed close securely. 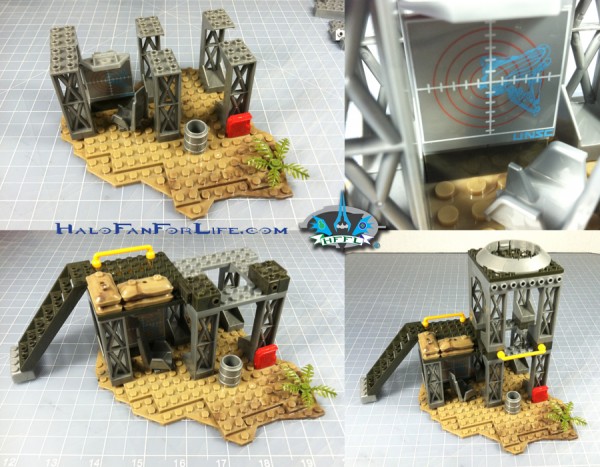 The outpost itself is a nice little design. Make note of the screen showing the banshee in the top right of the above pic. That’s a Reach/Halo 4 style Banshee. Hmm, does this mean we may yet get that version of Banshee? Man, I REALLY hope so as I prefer the curvy wings rather than the angular ones of old. 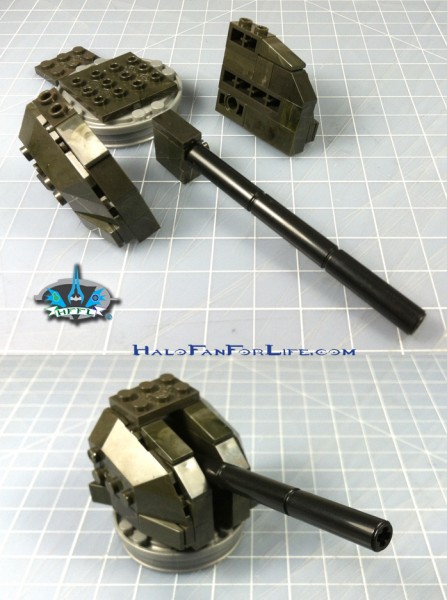 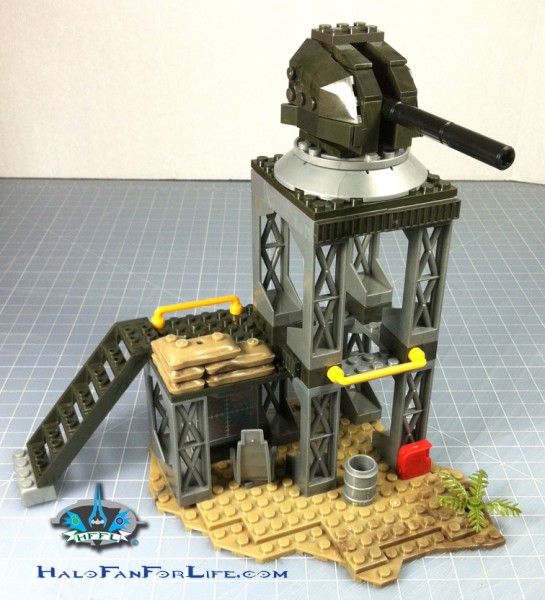 The structure us complete and awaiting the figures and cyclops to populate it. I’m grateful for yet more of the sandbag included in this set. Many of you long time readers know I like extra set design pieces like those as they help flesh out a scene and make it slightly more realistic. 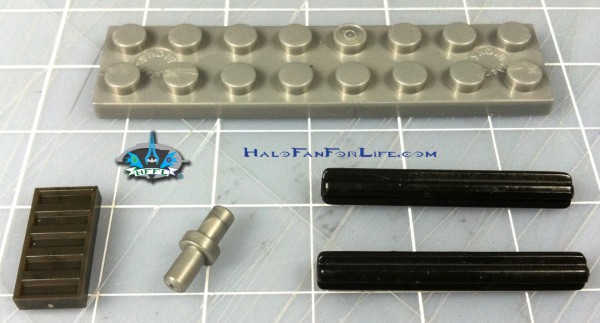 Above shows the very few pieces leftover. Note those pins. Those are the large ones I referenced earlier in the review.

The weapons and accessories. Normally I’m not a fan of non-blue energy swords. However, in the case of the zombie spartans, I dig it.

On to the mini figures.

A Reach style HAZOP spartan is pictured above. As with all of the new UNSC figures, it’s armor is removable. I’m glad the HAZOP was done. It was one of my favorite helmets in Reach.

Next we have a glow-in-the-dark zombie Commando Spartan. It varies slightly from the Commando in the Containment Armory set. You’ll see that in a second.

A glow-in-the-dark zombie Scout Spartan. Both of the above zombie spartans also have a complete set of orange armor. So you can choose for yourself if you want them to be zombies or spartans. 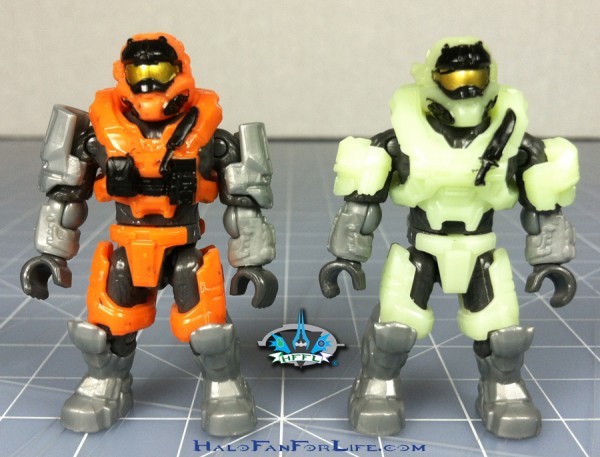 Here is a comparison between the Commando from the Armor set and the zombie Commando in this set. Note that the shoulders and chest plate are different. 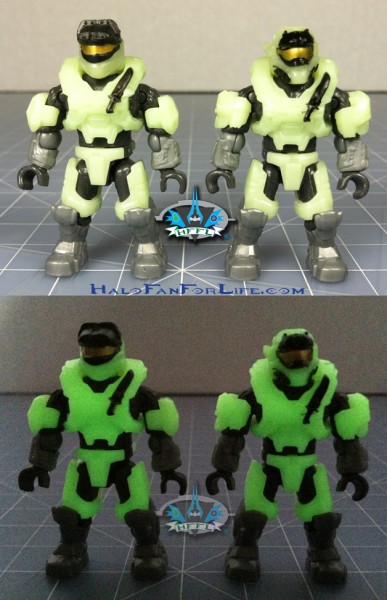 Here’s a good shot showing just how well these figures glow. This isn’t even in full darkness and they are glowing like they are radioactive! 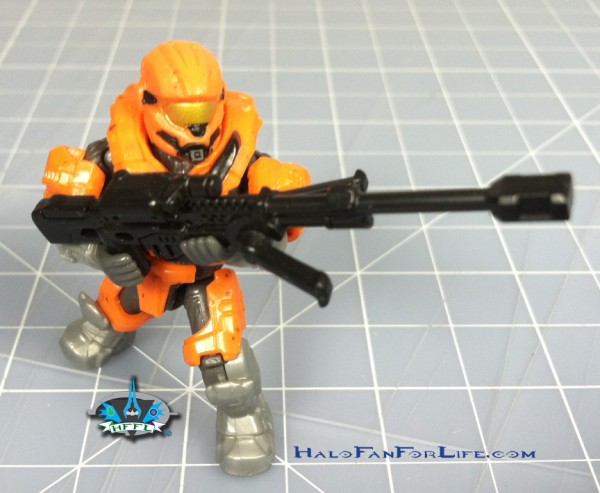 The HAZOP is ready to snipe any zombies who get close!

Above is the completed set both in light and dark to show the glowing effect.

And finally, I’ve included the Containment Armory set in this pic. It fits in quite well with the theme. Personally I want to get a few more of the Outpost set. Not for the figures though, but for the set pieces. They really are great for Diorama structure.

Summary: This set is a quick build. I had no complications when building it. The set has a varied amount of weapons and accessories. While this set isn’t anything seen in the Halo games, comic books or novels, it certainly fits well within. This and the other two zombie sets for this year are exclusive to Target. So if you’re thinking about getting them, might I suggest getting them when you see them. Who knows if they will be around for long.

Overall Rating: I give this set 10 out for 10 medals. This set gets a solid TEN from me form a few reasons. The glow-in-the-dark feature works VERY well. We get 3 mini figures, two extra armor sets, a cyclops and a decent sized structure. In my opinion those all equate to a set that holds it’s MSRP of $30.

Do I recommend it? Hmm, I think the above tells you my answer. HECK YEA! Now if these only go on sale…If so, I’ll have some figures up for sale/trade from the sets.