This past weekend, we brought a few things we’ve been working on to this massive gaming expo called PAX Prime. It happens every year right down the road, so we usually walk over and check it out. Luckily for us, thousands of you came too, and even eagerly waited in line to play Halo: The Master Chief Collection for the first time in North America. With help from our friends at Xbox, ASTRO Gaming, Skullcandy Gaming, and ESL, we set up several 4v4 stations all around the expo with multiplayer gameplay on the recently announced re-mastered version of Lockout, set the game timer, and let you play to your heart’s content (or until you hit the score limit) (or the time limit).

After thousands of games, thousands more kills, and $10,000 given away at the PAX Prime Showdown, this year’s northwest edition of the Penny Arcade Expo has come to a close, but not before we shared new announcements, details, videos, and more with you. In the entirely unacceptable event that you missed anything, we’ve got it all right here. 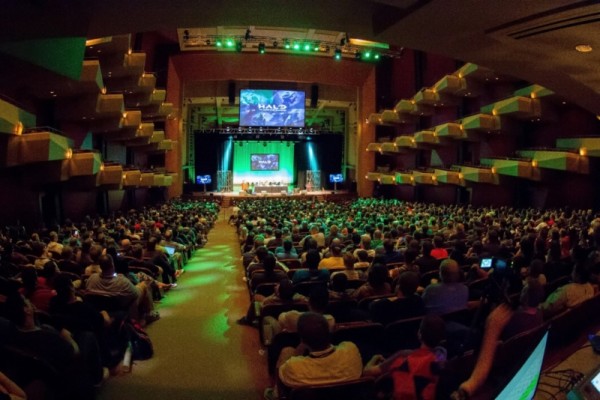 Twelve months ago, thousands of Halo fans descended upon Benaroya Hall for the Halo 4 Global Championship. Just days from the one-year anniversary of the event, we welcomed thousands back to the same venue once again for the PAX Prime 2014 panel. This time around, Frankie commanded a rousing panel staffed by Executive Producers Dan Ayoub and Kiki Wolfkill, Senior Audio Director Paul Lipson, and Certain Affinity’s Max Hoberman.

With Kiki’s help, we also got to reveal a bit more about Halo: Nightfall and even share a short behind-the-scenes glimpse into the Ridley Scott-led digital, live-action series coming to the Halo Channel later this year. In particular, they shared this video which teased a “character” very important to not only Halo: Nightfall, but one familiar to anyone who has played Halo. 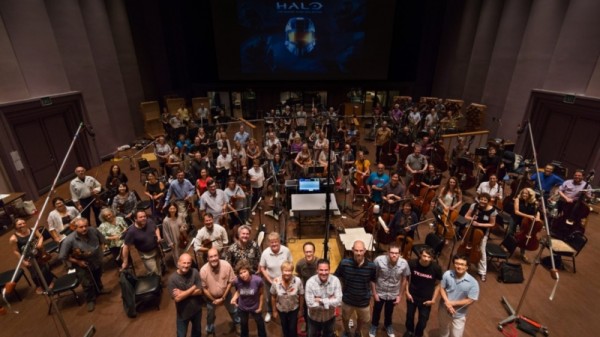 Senior Audio Director and Paul Lipson also brought some goodies of his own to show off. He shared that we’re re-orchestrating all of the original Halo 2 audio, and you’ll be able to switch back and forth to the original audio as easily and seamlessly as you’ll be able to switch between the graphics. We even made a quick video to show you how rad it sounds now (play this with some nifty speakers / stereo headphones for maximum enjoyment).

Not only will Halo 2: Anniversary bring back the entire Halo 2 Soundtrack beautifully adapted and re-orchestrated at Skywalker Sound, but in addition to all the original audio tracks, we have two new original tracks from famed Periphery / Animals as Leaders guitarist & producer Misha Mansoor plus an updated versoin of the iconic “Mjolnir Mix” from the unrivaled Steve Vai.

Mr. Max Hoberman was also on hand to help show off everything Certain Affinity has done to bring Lockout back to you. It’s back. It really is. I give you a sneak peek in the video below, which is an abbreviated version of a new series coming to the Halo Channel: Breaking Down the Map.

Be on the lookout for more episodes of Breaking Down the Map, which will be coming this fall. We’ve got a lot of maps to break down, so I hope you’ll join me. It’ll be an adventure.

Dan Ayoub was on hand to at last grant you some more details on Halo 2: Anniversary Forge Mode improvements. We could go into it all or just let you examine this list and, if you’re like us, sit in your chair with your fingers steepled and quietly chuckle to yourself and whisper “YESSSSSSSSSSSS…” until it gets weird. We hope you’re excited about some of the new improvements and features coming to Forge in Halo 2: Anniversary. Check ‘em out below.

We’ll have more to share in the coming weeks leading up to the release of Halo: The Master Chief Collection, Halo: Nightfall, and the Halo Channel this November!

HFFL: You can bet we’ll get more info come New York Comicon. I’m actually hoping to be there this year. It’s a long shot, but we’ll see if my request is granted…

The PAX Prime Showdown was the follow-up to our Halo 2: Anniversary kickoff tournament, the gamescom Showdown in Cologne, Germany. As PAX Prime approached, we reached out to top North American teams and players, invited the top team from the UK, and held some wild card qualifiers on the show floor. By Saturday morning, we had eight teams, $10,000 to give away, and a brand new version of Lockout that some of the world’s best players would soon put to the test.

Triggers Down gets into the action at PAX Prime (photo credit: Josh Engel)

The two day, double elimination bracket featured some of the world’s most storied professional Halo players facing off against in Halo 2: Anniversary for the first time. Expectedly, the player’s performances were incredible, pulling off ridiculously and in some cases offensive plays that showcased their supernatural familiarity with Halo 2 maps and weapons (as well as raw skill and awful habit of pulling off no-scopes, sticks, and Running Riots that are illegal in most other countries around the world).

To get a sample of this weekend’s sprees and highlights, check out Beyond Entertainment’s Top 5 Plays for the Halo PAX Prime Showdown:

If you’d like to catch the tournament in its entirety, check out the “videos” tab at http://www.twitch.tv/halo. Lastly, we’d of course like to congratulate eXcellence, our winners of the Halo PAX Prime Showdown. This squad of Halo legends cruised through the winner’s bracket without dropping a series, and pulled a 3-0 victory in the finals to take the $5,000 first place prize.

Congrats to eXcellence on their win this past weekend!

Lastly, we couldn’t resist showing you Hasting’s brand new behind-the-scenes look at Halo @ PAX 2014. He’s teamed up with the crew at Beyond Entertainment to create a video that showcases a truly unique sneak peek at this past weekend’s tournament. Take a look here – it’s hot off the presses.

Before we close, over the past few weeks, we’ve received a great deal of Halo 2: Anniversary feedback from many of you: players, fans, live stream viewers, forum-goers, Twitterers, redditors, and more, and we’d like to say thank you. Whether you’ve given us feedback on menus, control schemes, Forge, or gameplay elements, we’re continually evaluating your feedback as we reach the home stretch of Halo: The Master Chief Collection development.

We’re sure you’ve got more questions about this game, and as we get closer to launch each week, we’ll be sharing more information, answers, and more. Be ready.

Last week, we turned the spotlight on the color white. Take a gander at the following Ragnarok screenshots, and maybe even find inspiration to make your own. 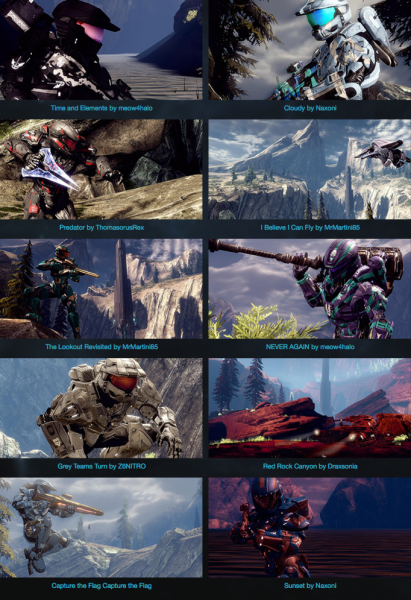 HFFL: The only one out of these that I really like is “Red Rock Canyon” by Draxsonia. It’s the color of the rock that makes this pretty cool, IMO.

For your chance at being in the next spotlight, take a screenshot with a Spartan high in the sky and tag it with “Up High” and “Halo Waypoint,” and maybe, just maybe, yours will be featured in the next Halo Bulletin!

And with that, this week’s week’s Bulletin comes to a close.
Until then,
Bravo

p.s. I’ll leave you with this fantastic cosplay combo from this past weekend:

HFFL: For those that don’t know, those two folks above got engaged at the Halo Panel on Saturday. The ODST is the lady of the two and she said, yes.