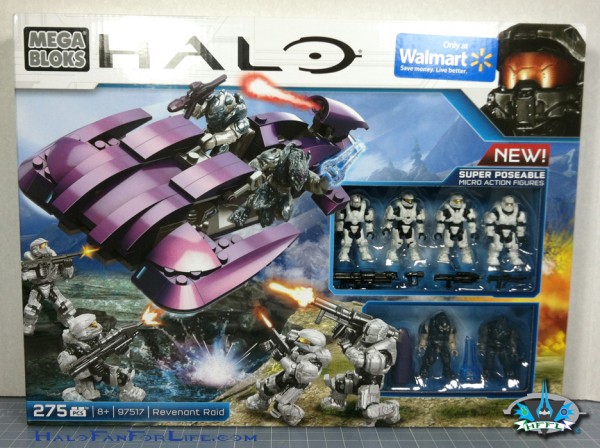 The front of the packaging is well done, showing a cool action seen and a window showing all 6 figures included. 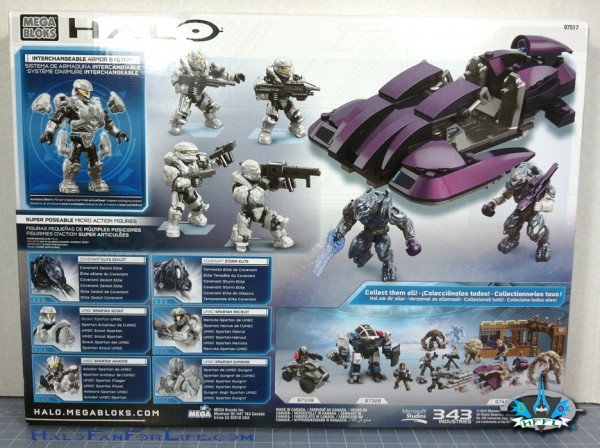 The back of the box is just as well done. The Elite Zealot looks like Jul ‘Mdama, though he’s not credited here. The other Elite could have been Jek, but he wasn’t credited either. That’s too bad. It would have made the set better had they been named figures. Hopefully we’ll see them some time in the future. 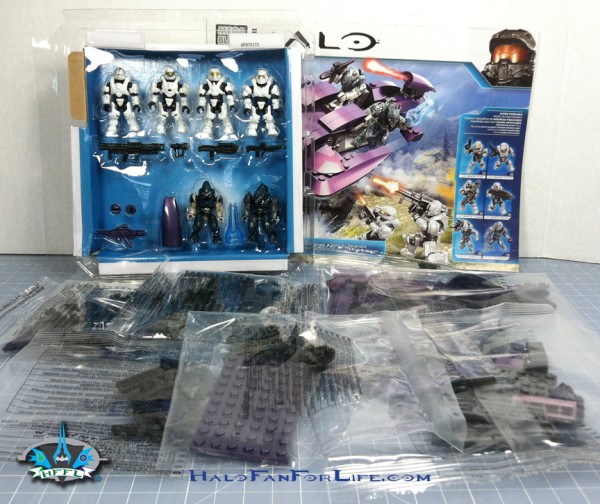 The contents of the set. The figure tray is rather secure in the box, so you either need to be careful to get it out, or just tear it out and not worry about damage to the box. 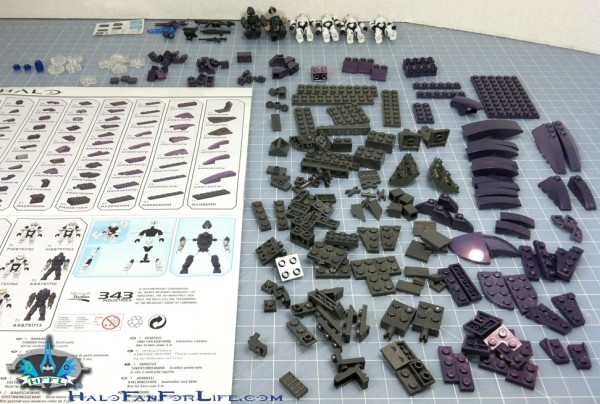 The pieces are sorted out. As you can see most of the pieces are either grey or the darker purple that Mega has gravitated towards for Covenant vehicles (which I like, BTW). 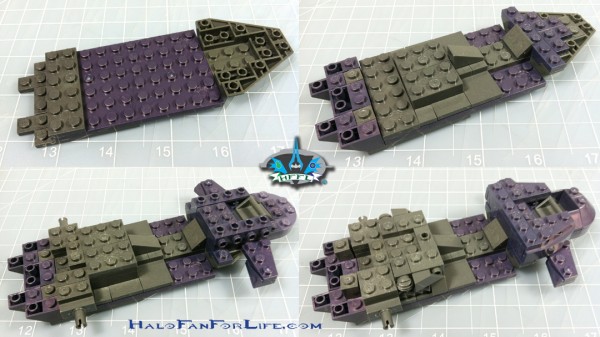 The first few steps here show the base of the Revenant being built. 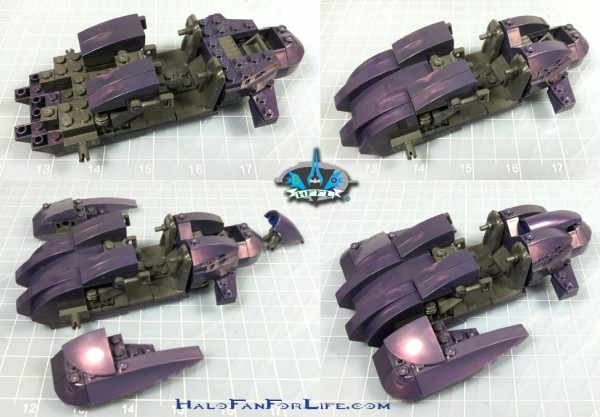 These next steps show the outer armor being added, as well as the wings.

The last steps above show how clear pieces are added to the bottom to make the Revenant look like it’s floating. The inset pic shows the cannon in the deployed position.

The weapons included allow for all 6 figures to have one each at least. There’s a good mix of light, mid range and power weapons in this bunch.

Above shows the pieces I had left over. To the right, a small Covenant holotable made from those parts.

Be sure and click on each of the figure pics to see all the detail. The Elites look great. The addition of the skin color to the Storm Elite looks VERY game accurate. Again, the Zealot, had it the white hand on the armor would have made for a great Jul ‘Mdama. Ah well…

The Pilot and Gungnir Spartan in this new speckled Arctic color. Note the third pic from left. I deliberately moved the forearms up a little so you could see the thigh armor. It’s different for each Spartan in this set.

And finally the full set together. Will the Elites run down the Spartans? OR, will the Spartans take out the Revenant before it can do any damage???

Summary: The set is easy and quick to build. It’s actually the same exact build from the previously released Revenant set. The only difference in the vehicles is the main color. This one having the dark purple whereas the previous having the game accurate wine color. The figure choice is pretty good. 6 figures in a set this small really helps the set with regards to value. All in all a decent set, though, I still have issues with the design of the front wings. They should pivot further out and the wings should be slightly farther back.

Overall Rating: I give this set 9 out for 10 medals. This set has decent value considering the 6 figures included. The color change doesn’t really bother me as most of the Covenant vehicles have the dark purple color to it. The only real issue I have are those darn wings. This would have been a perfect opportunity for Mega to have fixed the design to make it more game accurate. For this reason I took a full point off. It’s still a great set, just really could have benefitted from an upgrade in design.

Do I recommend it?  Yes. If the wing design doesn’t bother you, then this is an EXCELLENT set. I recommend getting this regardless.

The value is definitely here. With 6 figures valued at $3-3.50 each, this equates to $18-21 of the set. This leaves you with $12-15 for the vehicle itself. The Revenant is definitely worth that cost, despite the misaligned wings.