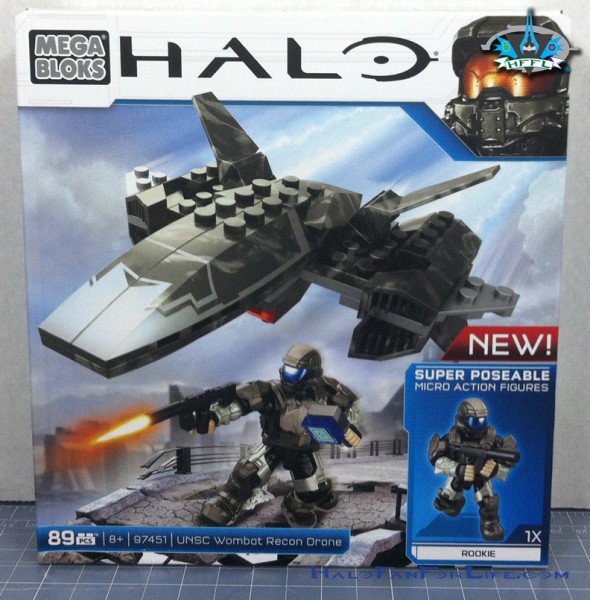 This is a small box, so if you want the set,be sure to check the shelves closely or you might miss it. BTW, nice design, as usual. 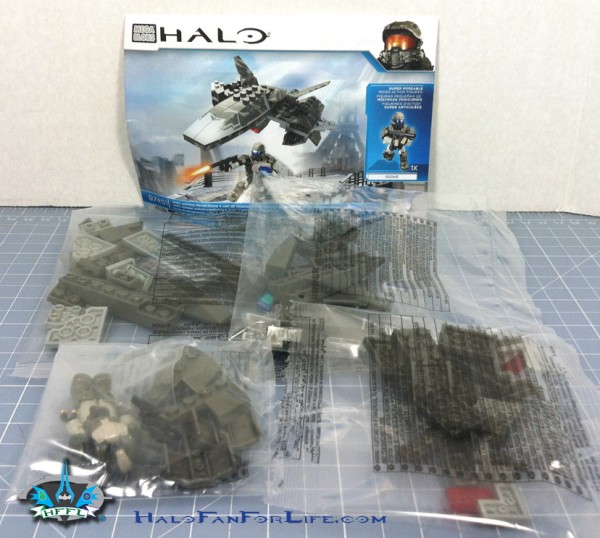 The contents of the box include 4 small bags of parts and the figure.

Here are all the pieces sorted out. Now, before I go on, I want to remark on the amount of pieces the box states it has. The set includes 89 pieces. Not including the mini figure, there are 71 pieces for the Wombat itself, 3 of those are for the “stand” for it to rest on, the SMG and the two pieces for the Drone’s controller. So that leaves us with 18 pieces for the figure. I keep trying to figure out (no pun intended) how Mega counts the figure as 18 pieces. Depending on how you count the pieces, it could be less than 18,but could also be more.
In this respect, I wish Mega wouldn’t count the parts to the figure in the overall total as it never seems to be consistent. Either that or give us a definitive break down on what and how they break down the pieces of the mini figure to be. Okay, moving on… 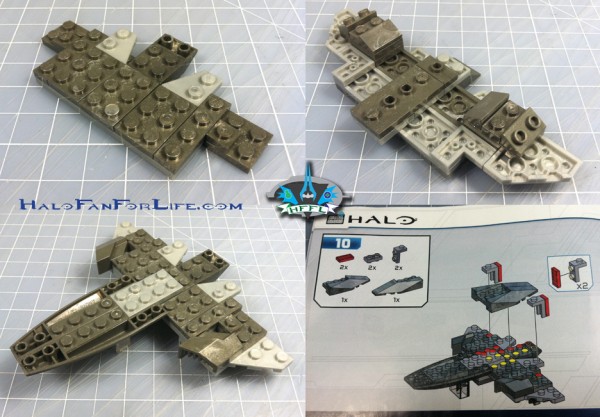 Above shows some of the early building steps of the Wombat. I included step 10 in the instructions here as there is a mistake. In the parts list box, top row,middle piece…That double side studded 2X1 plate is NOT part of the step. In fact, by this point, you’ve already used all of those kinds of the pieces earlier in the build. Even in the instruction of how the pieces go together and where they fit, you can see that the piece I mentioned is NOT used. So when you get this set, don’t worry about that piece. It’s a mistake in the instructions. 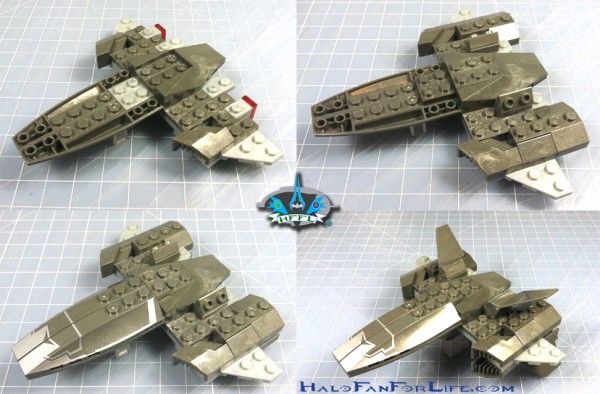 Above shows the latter stages of the build. The only issue with the build as far as “clutch” (pieces connecting and staying connected to other pieces) go, are the underside air intakes. It’s those pieces with the slates on them. They are best seen in the lower right corner of the above pic. Those pieces on the wings. The lower ones clamp on the the upper ones. Though only by two studs. Be careful when handling this ship as you might pop those pieces off accidentally without much force of touch to them.

Here is the Wombat in orthogonal views. I really like this design. Instead of it being a drone though, it looks more like a Micro Fleet version of something.

The only weapon included in the silenced SMG to the left and the two-piece drone controller on the right. The translucent blue tile has printing on it, versus a sticker, for which I’m thankful for.

Here’s the ODST ‘Rookie’ figure. I have to say that I really like the colors of this figure. That said, added camp to the thigh armor would have made this closer to the in-game characters. The lower arms should be the dark grey, not the lighter grey. The chest plate also should have been the darker grey  with just some highlights being the lighter shade of grey.
Here is an example of the character from the game itself, so you can compare: 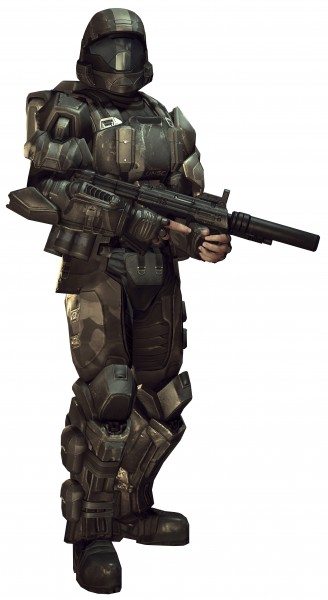 That said, again, I like the color of this figure and it definitely stands out from other ODSTs. Perhaps that is why Mega chose this color direction for the mini figure. 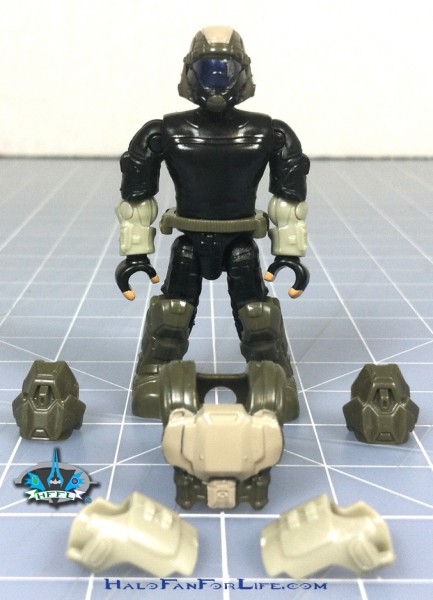 Here’s the figure with it’s armor off. 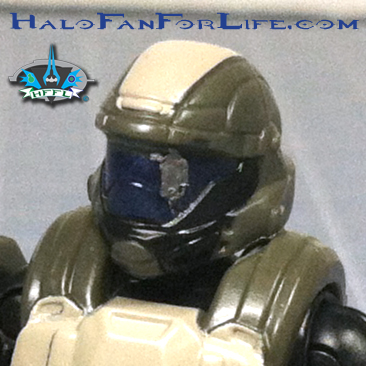 The only issue I had with the my figure is that on the helmet,it has this strange silver paint ‘chip’ on the visor. Obviously this is a mistake. With the fig being so small, at a quick glance you’d miss it. This could have been easily fixed at the manufacturer level. I can fix it with some paint myself, though it’s not something we consumers should have to do. This is not a huge deal, but is a matter of quality that Mega should point out to their manufacturing plant in China. 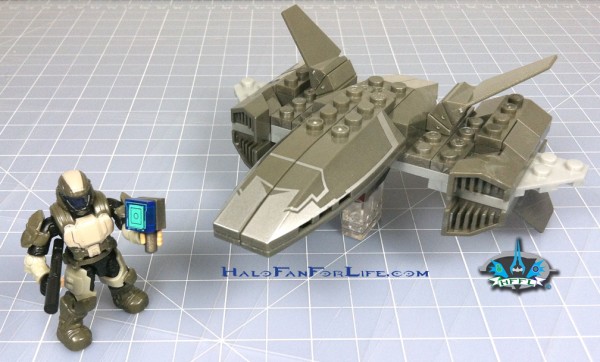 The ODST readies the Wombat for a scouting mission.

Before I end the pic part of the review, I wanted to show you folks just how awesome Mega Bloks mini figures are. Here is the world’s strongest ODST! 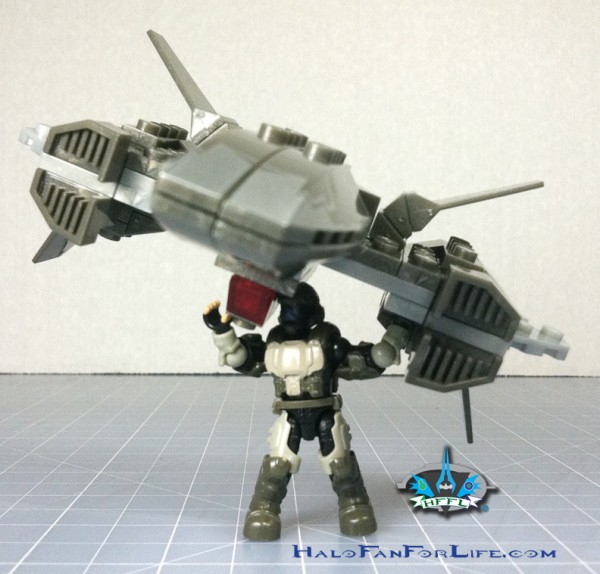 It took me about 2-3 minutes to balance this properly. Note that the figure isn’t being supported by being stuck onto a baseplate. It’s standing itself, holding the MUCH larger drone. I’d like to see lego try this with their mini figures! The articulation of Mega’s figures is much in part what separates itself from lego. Okay, MAYBE you might be able to balance something large on a lego fig, but it most certainly won’t look as ‘real’ or as cool doing it.

Now just in case someone thinks this is Photoshopped, I took two more pics from other angles to show you that this is real! 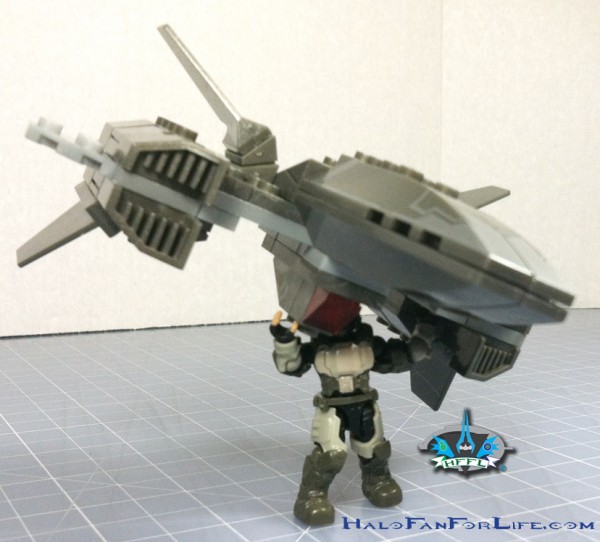 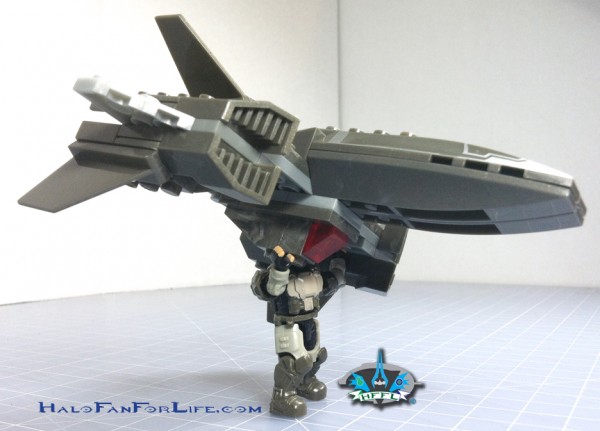 Folks, this is awesome! If you’re a Mega Bloks fan like me and a lego fanboy gives you flak for it, just show them these pics of how much better Mega Bloks mini figures are than theirs. ‘Nuff said! LOL

Summary: The set is a quick build as mentioned at the beginning. There isn’t much to it as it’s the drone and the figure. That said, the figure is really cool and stands out from previously released ODSTs. Not just in the removable armor, but also in the color scheme for it as well.

Overall Rating: I give this set 8 out for 10 medals. This set has decent value. Recall that I mentioned the piece count for the ship itself. Not including the figure, weapon, the two-piece controller, and 3 piece stand, it’s 65 pieces. Using my normal 10 cents per piece guideline, that puts the ship at a $6.50 (US) value. I can agree with this. The two ices with printing on the ship really help it. I’m SO glad that those weren’t stickers we had to apply to the ship.

Given the analogy above, when you add in the figure and accessories for the other $3.50, this set is spot on for pricing.

So why did I give this a 8 instead of a 10?
• Color scheme on the figure doesn’t match the in-game version
• The three-piece stand could have been bigger to make it more stable
• The ship itself, while cool looking has no action features to it
• The two lower intake pieces are prone to popping off

• And specifically for my set, the silver paint chip on the visor – This is likely to be different for each set, so I didn’t take points off for it. Though, if you buy the set and have the same or similar issues, please take a pic, send it to me and I’ll forward those on the Mega so they can be made more aware of quality issues.

Do I recommend it?  Yes. If for any other reason than to have the Rookie figure. Strangely enough, the Wombat looks like a ship out of Bungie’s new game Destiny. (And I’m okay with that)