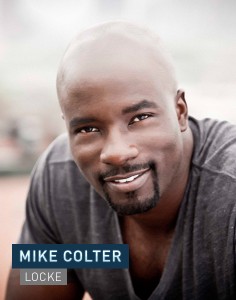 “Yeah, I’m a playable character in Halo 5,” Colter observed in an interview with X-One Magazine, posted to Reddit. “Once Halo: The Master Chief Collection is released, and then Halo 5 comes out shortly thereafter, you’re basically going to be playing a game with me as the primary character.”

In Nightfall, Locke is an ONI agent – a manhunter sent to investigate the appearance of a deadly compound on a colony world. By the time Halo 5 rolls around, however, he’ll have graduated to the status of Spartan. “I’ll have some cool weaponry, and some cool abilities, because by that time I’ll be a Spartan IV.” That’s the same make of Spartan as those aboard Halo 4’s UNSC Infinity, in case you’re wondering.

HFFL: I think most of us figured out that we’d be playing Locke at some point in Halo 5 Guardians.

We know from Halo: The Master Chief Collection trailers that Locke will be dispatched to track down John-117, who has mysteriously vanished – the Collection is effectively him doing his homework on the Chief’s greatest exploits. “What’s not known, is whether I’m a friend or foe,” Colter added, tantalisingly. “The relationship between Master Chief and Jameson Locke is going to be interesting. Because what’s the outcome?

HFFL: Heh,this just adds fuel to the speculative fire. I kind of hope he’s an enemy that turns into an ally. Yes, that will be much like Halo 2’s story in that respect and I’m okay with that.

“Is he dead or alive? Because that’s usually what a manhunt comes down to, dead or alive, but you won’t know what the purpose of finding Master Chief is [right away]. Or what will happen if we do find him, what condition he will be in, and where he’s at mentally. But I’m sure that’ll be a plot twist in Halo 5.”

HFFL: Let the conspiracies of the plot twist begin! Folks, reply with what YOU think might happen!

Reading just a little between the lines, it seems like Master Chief will need to be discovered alive in order for his mental state to have a bearing on the plot. What do you think? Let’s hope this doesn’t prove to be another Arbiter-style fanbase scandal.

HFFL: Um, what? What I do find interesting in all of this is that the actor is even talking about this. Given that it’s with OXM, it seems he has clearance to talk about his role to a point. Still, it makes me feel like he’s given up a little spoiler info. What do YOU think? I do know that Master Chief will be a playable character. But given this info, it seems like he won’t be as much of a playable character as Locke. If that’s the case, then 343 might have misled us a little. Yes, Master Chief will be integral to the story, but might not be as much of a playable character.

Also, thanks to HFFL reader Wilson for sharing this link with me.

[UPDATE] (Yeah, that was quick…) Frank O’Conner has answer a very important question regarding Master Chief:

Source Link for above screenshot. [/UPDATE]