I should have posted this yesterday but got way to busy to get to it. 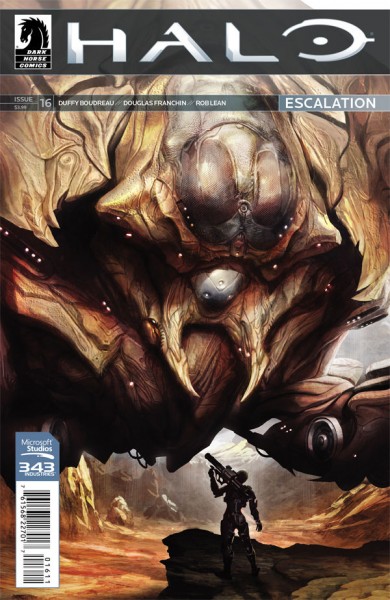 SPOILERS BELOW You have been warned.

The story within deals mainly with Palmer hunting down Halsey. She does get her, but instead of killing her outright, Palmer decides to bring her back to the UNSC. However, before she can complete that plan, Halsey escapes.

Now, there are two things a bit wrong here. First, Palmer engages in a heated discussion with Halsey. If Palmer used her training properly, she would have bound the prisoner, keep Halsey from both talking as well as running away.

That brings me to the next point. How in the world can a 70+ year old woman outrun a spartan? That just doesn’t happen.

What’s worse, Halsey had the second half of the Janus key with her. Palmer failing to bring Halsey in now means Jul ‘Mdama has both pieces to the Janus key. At the end of the comic the halves are united and Haley has found the location of the Absolute Record.

This situation would be hard pressed to be worse for humanity. A now rogue Dr. Halsey seemingly planning with Jul ‘Mdama, both halves of the Janus key in their possession, and now the Absolute Record location has been found… What more can go wrong?

The artwork was mostly consistent with one exception. The human faces are off kilter here when in comparison the previous issues. Spartans, Elites, the Harvester, those all look great. But the human faces look rather haggard. Too much emphasis on the bags under their eyes. As well, it seems the eyes themselves are too wide apart, again when in comparison the previous issues.

The reason is that we now have a different penciller. It’s been either Sergio Arino or Ricardo Sanchez that have pencilled all of the previous issues of Escalation. This issues we have a new penciller by the name of Douglas Franchin.

As well for the colorist, it’s been either Juan Castro or Rob Lean. This issue’s colorist is Michael Atiyeh.

I don’t mind too much if one or the other changes from issue to issue because the art and color have been consistent. But to have both the penciller AND the colorist changed, well, that had a real impact on this issue for me.

Don’t get me wrong, I enjoyed the story. The only parts I didn’t like were the panels with the human faces. That I lay blame to the penciller as I feel the colorist did a good job on the artwork.

I of course still recommend getting the book. The story puts the UNSC and all of humanity at risk. That’s definitely something that can continue to be built upon. Now the question is, will Halsey really betray humanity OR will she finally turn her situation against Jul ‘Madama when they get to the Absolute Record?