As we get closer and closer to the end of May, the weeks start to blend together. The days get longer, news and announcements slow down quite a bit, and teams across the studio focus in on upcoming experiences. For the Halo 5: Guardians team, this means perfecting the polish and presentation of new, never-before-seen goodness that awaits. Across the studio, the MCC team hammers away on upcoming game updates. I sit somewhere in the middle, furiously running back and forth between the two, checking out what they’re working on, and getting in on as many playtests as I can, including the latest Halo 5: Guardians Arena maps, the stormy shores of Relic and the devastated streets of New Mombasa found within ODST, and [REDACTED], which we’ll be sharing more about later this year.

As I started to say, these next few weeks will be a bit lighter on the news front, but we’ve got a few things that I’m excited to talk about at the moment. Let’s get into it.

If you’re a Halo fiction fanatic, you’re likely caught up on the latest issue of Canon Fodder. If not, you’re missing out – in the most recent blog, Grim covers the new cover art and book description for Halo: Last Light, the recent turn of events in Ben Giraud’s #HUNTtheTRUTH adventures (episode 7 – “WHO’S LISTENING” is available now on Halo Channel, SoundCloud, and iTunes, complete with what might just be the most intense cliffhanger yet), and the currently-underway “Hunt The Signal” contest. Check out all of this and more here.

HALO: THE MASTER CHIEF COLLECTION
We’ve got a few different things moving on the MCC front, including this month’s content update, which will include Relic and ODST. As we get closer to the update, we’ll have additional details about how these goodies will be available, as well as what else will be included. Lastly, we’re happy to announce today that Relic will be re-mastered as Remnant in Halo 2: Anniversary. 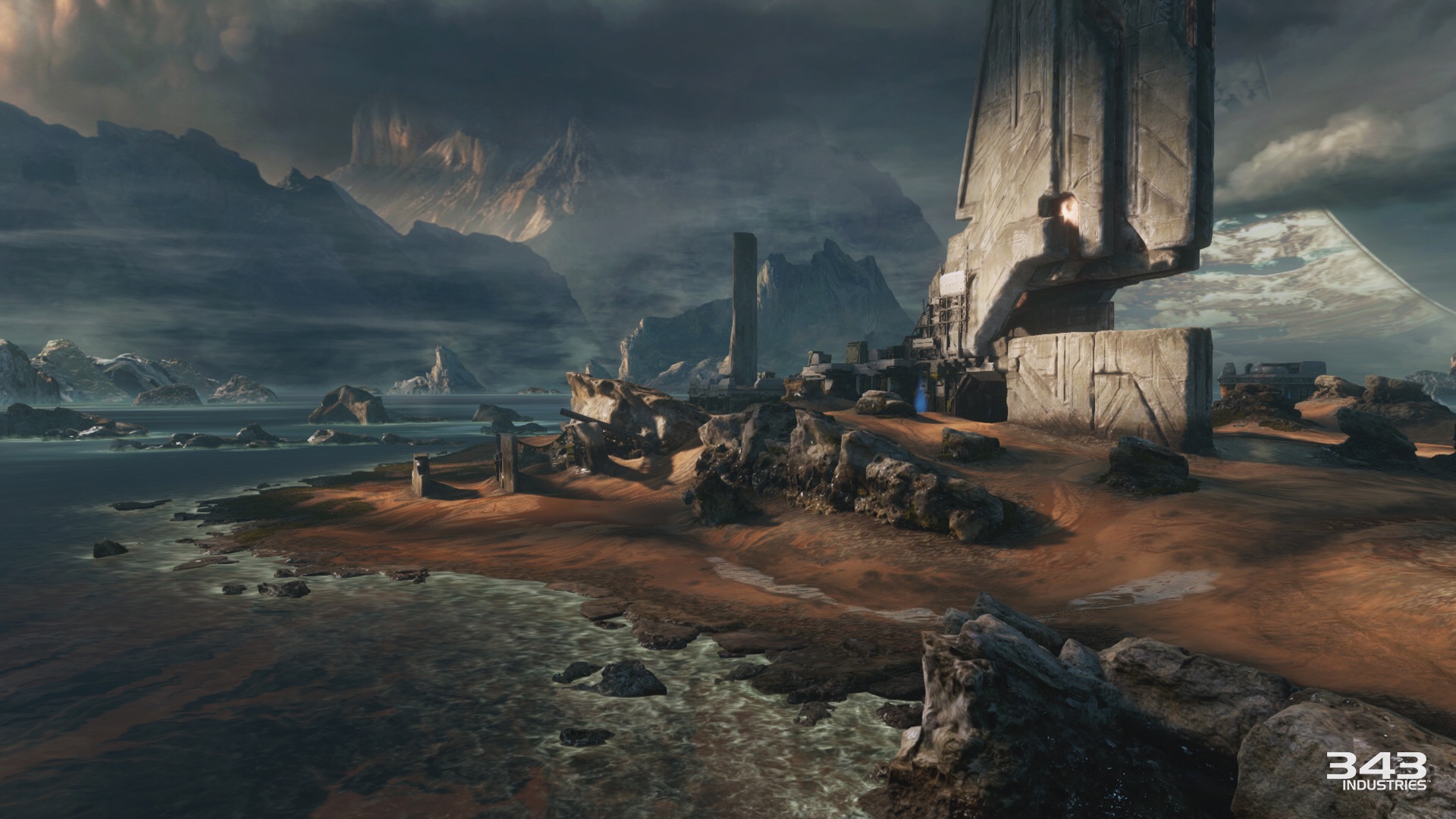 Relic, soon to be re-mastered in Halo 2: Anniversary as Remnant

In the last blog, we provided some background on MCC playlists – how the initial design was created, some of the feedback we’ve received, and what types of changes we’re making moving forward based on your feedback. If you’d like to catch up, head here. I’d also like to thank you for the feedback that this blog received, and ask that you continue to provide your comments, as it very much shapes what will come in future weeks.

Last week, we made fixes that allowed us to update the Halo 2: Anniversary playlist to 4v4, as well as Rumble Pit to 6-8 players. As you may have read on Twitter, upping BTB to 8v8 remains a top priority, and the team is working on necessary fixes to ensure that 16 player matches function correctly in matchmaking. Next up, let’s get into the new stuff.

TODAY’S PLAYLIST UPDATE
Our most recent playlist update just dropped, which means that Team Objective is now the featured playlist, and it contains some of the greatest objective hits from Halo: CE, H2, H2A, H3, and H4. Last week, we also talked about your feedback shaping playlist design, and SWAT fans will be happy to know that the playlist is here to stay, and will remain in the lineup. We’ve also gone through the feedback you provided last week, and have reorganized the Halo: CE voting options to increase the occurrence and variety of Slayer game types, and voting slots 1 and 2 will now only contain Slayer game types. Some of you have also called out that this playlist update incorrectly added motion tracker to Halo: CE, and work is already underway to get this corrected as soon as possible.

Additionally, we’ve added some new maps to select playlists, including Burial Mounds to Halo 2 Classic (as well as Team Objective), Exile and Harvest CTF to the Halo 4 playlist, and Longest to Team Slayer, and also reduced the occurrence of Team Slayer BR on Warlord in H2A. We also updated the Halo Championship Series playlist with the latest tournament settings, including the addition of Warlord & Lockdown Oddball, updated score limit for King of the Hill, and an updated Shrine Assault map variant. Last up, we’ve updated Halo 3 map variants, which means Pit Stop, Sand Tarp, Epilogue, Boundless, and all other updated variants can now be found in matchmaking.

While we’re excited about each of these, we know many of you are also itching to know what’s up with more ranked playlists. So, let’s talk about just that.

Our May update will include with it some improvements to the ranking system, and we’ll provide full details as we get closer. While we don’t yet have an exact date for when ranks will begin to roll out to additional playlists (we’re aiming for as soon as possible after this CU), here’s a sneak peek at which of the current playlists will be ranked:

This means that playlists like SWAT, Rumble Pit, Big Team Battle, and each featured playlist will remain unranked, but will use skill matching. Additionally, as each game’s individual playlist will become ranked, we’ll be moving Team Slayer to an unranked playlist within the next few updates (most likely in June), to ensure that there is a strong mix of ranked vs social experiences within MCC matchmaking. While the appeal of a who’s-the-best-all-around-Halo-Slayer ranked playlist is a particularly interesting one, we also see great value in a social slay-‘em-all experience, and we wanted to provide a head’s up in case you’re on the grind.

Now, we’re certainly well aware that some players would like to see ranked Team SWAT, and some may want unranked H3. The playlist lineup, by its very nature, cannot accommodate every possible player preference, but we’ll be keeping an eye on player feedback as well as data to ensure that all players have a go-to experience, if not many, waiting for them each time they head into matchmaking. For example, if a certain playlist begins to have a larger player base than others, we’ll start to think about making changes and ensuring that an appropriate amount of content – both ranked and unranked – is available for the audience. Similarly, if we find that future featured playlists perform particularly well, we’ll work on how to best integrate these game types and/or similar experiences into the lineup.

The return of Team Doubles, Halo 3’s Hardcore game types, and as mentioned earlier, 8v8 BTB all remain on the way as well. While some of these require some additional updates before they can be integrated into matchmaking, they remain a priority for the team, and we’ll let you know when these updates are close. As for Team Doubles, it will indeed return as a permanent playlist with an increased variety in terms of voting options.

Online tournament play is underway for Season 2 of the Halo Championship Series, and we have six online cups remaining until HCS Indianapolis presented by PGL, the largest LAN tournament thus far, which will offer $50,000 in prizing. If you haven’t yet plugged into the HCS this season, here are a few ways to get started:

WATCH
Missed any of the offseason team changes? Not sure who’s on top coming out of Iron Games Atlanta, and want to catch up on the storylines? We’ve got you covered. Our radical video team has put together a brand new HCS Season update, where we cover the offseason, new team rosters, break down some incredible CTF gameplay from Roy, and more. You can check it out below, on YouTube, or catch it on the big screen at home on Halo Channel.

PLAY
Want to start competing in Season 2? Thanks to an updated points structure, there’s still time to make a name for yourself online, at HCS Indy, or both. To begin competing in ESL’s online cups, head here, and to register for HCS Indianapolis presented by PGL, head here. There are plenty of HCS Points, cash, and stakes on the line for the rest of the season, and it will all come down to the Season 2 Finals by ESL on July 24-26, live from the ESL Studios in Burbank, CA. Eight teams will enter, but only one team will be remembered as the top squad. Do Evil Geniuses have what it takes to win Season 1 and Season 2 back to back? Only time will tell.

If you’re like me, and you like pictures better than words, you can also check out the updated Season 2 Roadmap below. 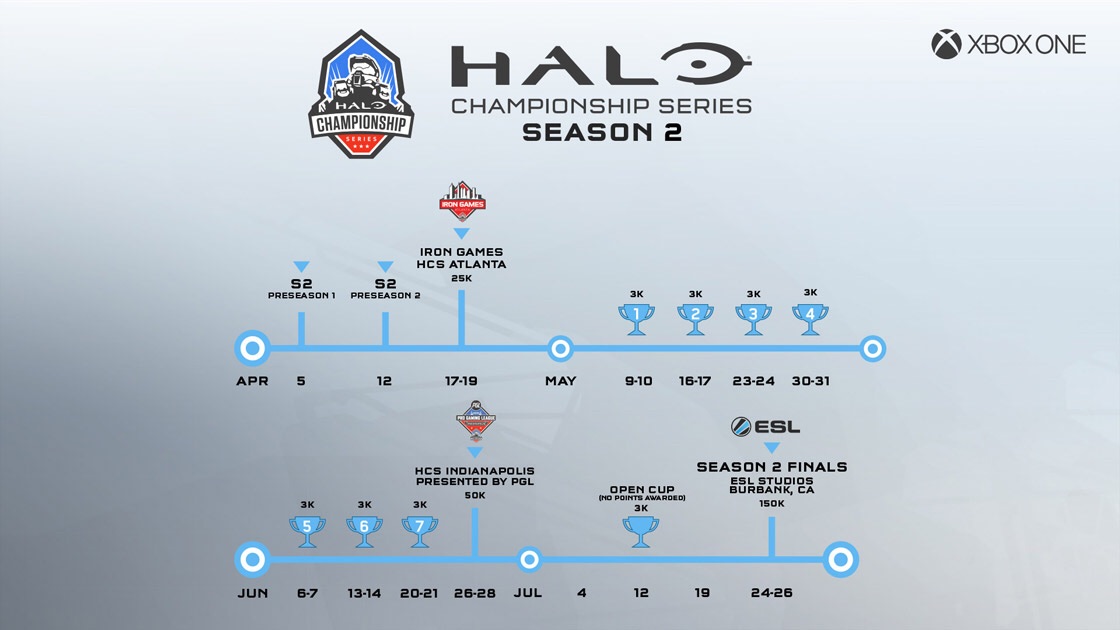 And with that, friends, this update comes to a close. Re-mastered classic experiences and brand new worlds are both on the horizon, and I can’t wait to jump into them with you.