Finally we have another named Elite. It’s been some time since that last happened.  There have only been three other named Elites in the McFarlane line. One of those done as a figure two different times. Can you name those??

But enough about those Elites, let’s take a look at the new Elite baddie, Jul ‘Mdama!

As with the other figures in this series, Jul is packaged in the slim card/bubble. It’s a pretty tight fit though as he’s a big figure. Still, I like that there isn’t wasted space. For those collecting these to keep carded, bear in mind Jul is a heavier figure, due to his size. SO you might want to display under some of the smaller figures, less it fall off your display and knock off those figs too. The only downside to keeping this packaged is that Jul will always be facing to the side rather than to the front. I’m an opener, so it doesn’t bother me. 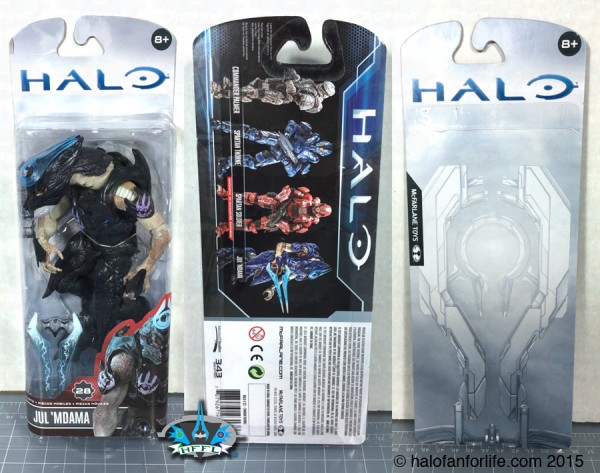 Orthogonal views of Jul. With exception to the ‘Hand of the Didact” markings, Jul is symmetrical.

Here’s a better look at some of the detail. The Hand marking is done nicely. But it’s not just that. The sculpt of the armor is fantastic. Even the skin wrinkles are done quite well as well as the ‘scales’ on the skin. 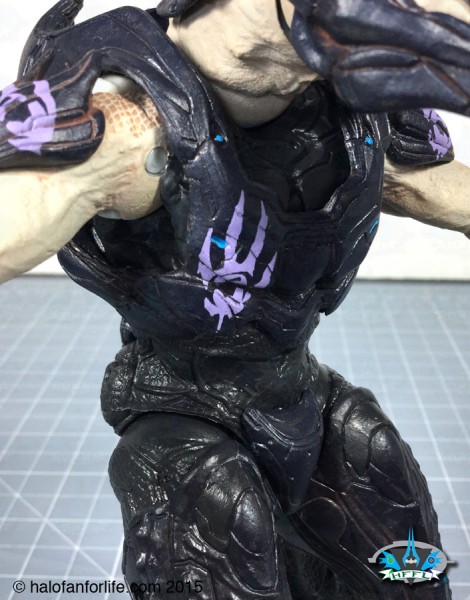 A closer look at the back of Jul. Again we see a fantastic amount of detail here. 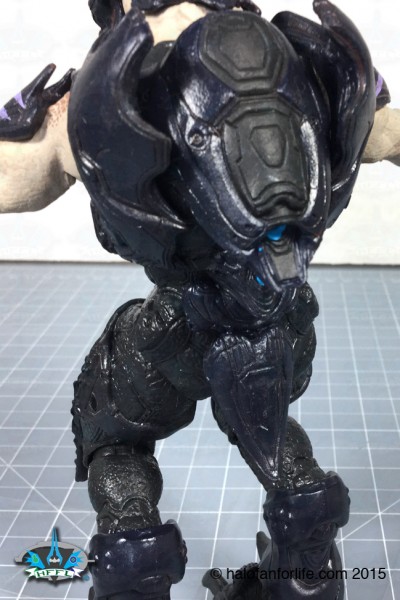 Jul’s helmet is removable! What an ugly mug, huh? Not related to the head, I want to point out something that is a slight detractor for me. It’s the joints used for the elbows and shoulders. Not only do they not match the skin tone, but they have that awful ridged or teethed mechanic to them. A smooth joint would have looked MUCH better here, not to mention an accurate skin color. 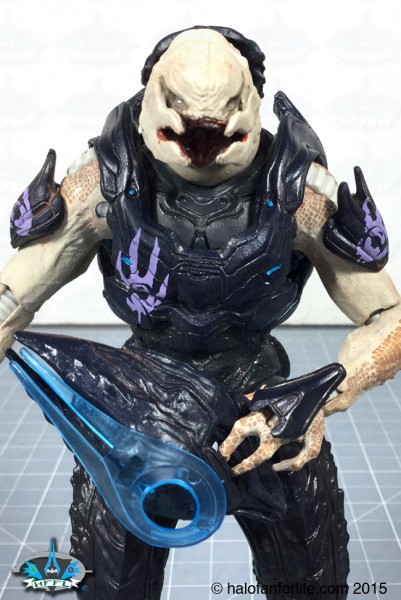 The only detractor to Jul’s head is the seam down the middle. This should not be visible, yet as you can see, it is and quite so. Thankfully, since the helmet is included, I almost certainly will always have this displayed with the helmet on. So it’s kinda of not a big deal. But I just wanted you folks to see this and make note of it for yourselves. 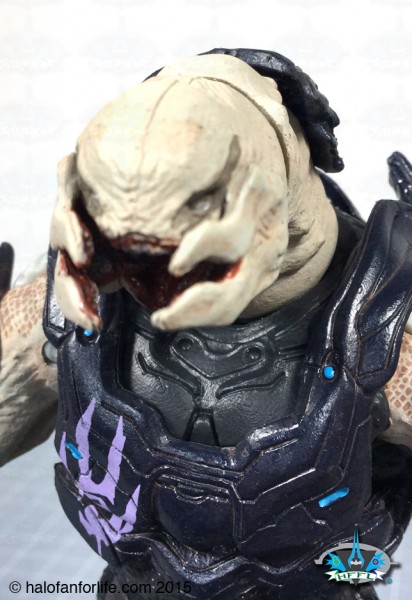 The detail on the head is great! Again skin wrinkles, the folds of the mandibles and so on.

As for the sword, well, it’s nice. I never seem to be satisfied with how Halo energy swords are done though, no matter who the manufacturer is. The hilt is excellent, but in this case, I’m not a fan of the white tips. Not a deal breaker though, just a slight personal preference.

The thing that does stick out though are those slit holes and then on the underside the circles. Yes, I know the circles are part of the mold, still not a fan of it though. Whether the slits are accurate or not, it just seems unneeded and does detract a little for me. Again though, I’m pretty critical of the energy sword. 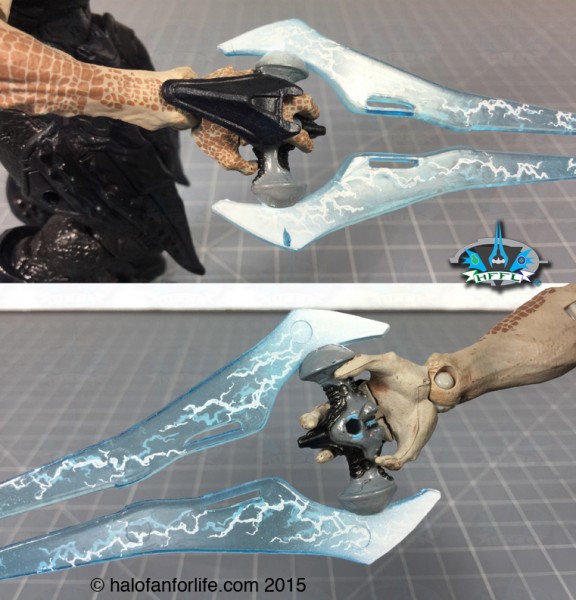 Well, now that the critique part is done, let’s look at some of the poses you can get Jul into.

Jul is ready for an attack! Those sharp 4 finger claws are ready to rake against any exposed skin, while the sword is ready to slash away at anything in it’s path! 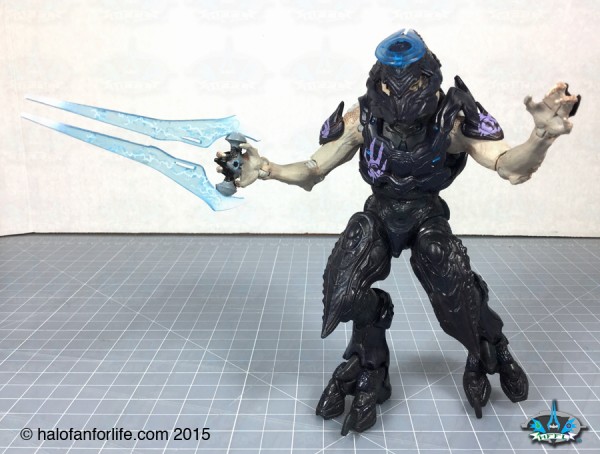 Is Jul kicking here or is he in the motion of being knocked down? You decide. The point here is that he’s able to stand on one foot. This is something that McFarlane Halo figures haven’t been so good at in the past. As you can see here though, that’s not the case.
Disclaimer: It did take me a couple of minutes to get this set right, so it’s not a quick process. Balance!! 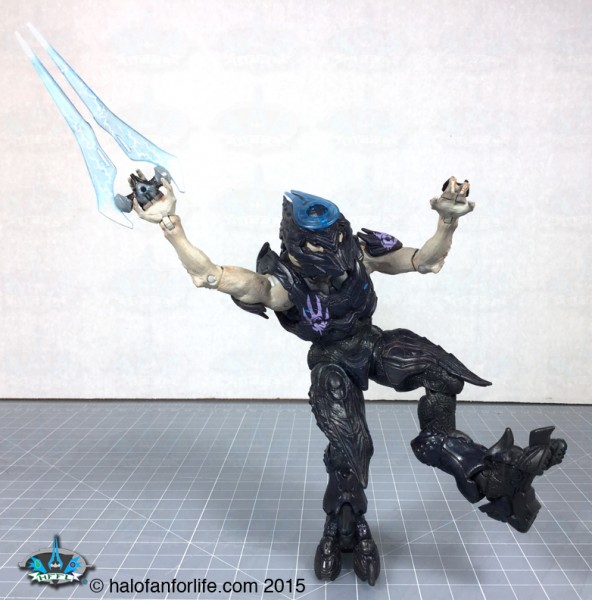 And finally, with Jul’s sword knocked out of his hand, he’s still not much less of a threat as he menacingly stalks you! 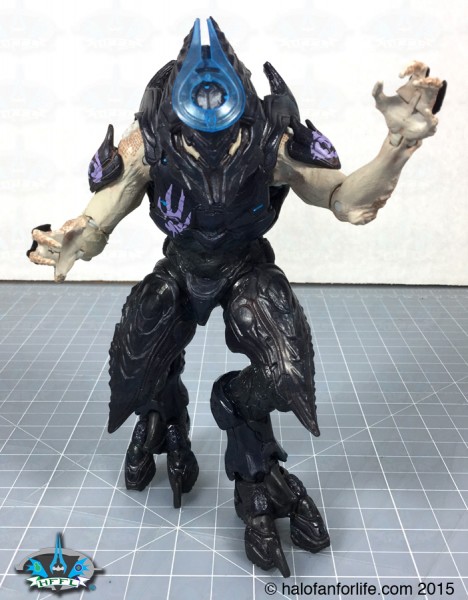 This gets a 8.75 out of 10 from me. Those joint pieces do bug me a bit as they do not look right for the character/toy. A small .25 knock for the visible seam on the head, that can otherwise be hidden with the helmet on.

Again though, if you can look past the joint pieces, this figure is amazing!

I highly recommend this figure. It’s LOADED with articulation as well!!

Price for this ranges between $14-17 depending on where you get it from. I got mine from GameStop.