I’m writing this from a fan perspective. So please understand I might make some mistakes. What is listed below is what I’ve gathered from around the web, much of which was revealed during E3 these last few days.

What is the REQ system?
It is the system used to earn weapons, vehicles or aesthetic to your armor or guns through REQ points in Halo 5 Guardians.

REQ Points/Packs
The quick and easy explanation is that the REQ Points  (Rpts) are the currency of the system, while REQ Packs (Rpks) are the reward.
Rpts are rewarded after multiplayer games, either Arena or War Zone. These can be redeemed in multiplayer for Rpks.
As far as I can tell, you can only redeem your Rpts during gameplay. Which does make sense in a way. Though for aesthetic things, I’d like to redeem those at any time. That is a question already posed to 343. I’ll post their response when/if they give one to that.

Redeeming Req Points in multiplayer matches.
• REQ Packs can be purchased with REQ Points at REQ Kiosks sprinkled throughout the maps. Below are examples of Kiosks found on the War Zone map A.R.C. Note the hexagon symbol above the kiosk showing that it is a REQ station. From further way (last pic) it even shows the callout of REQ Station above it. These are clearly identifiable. 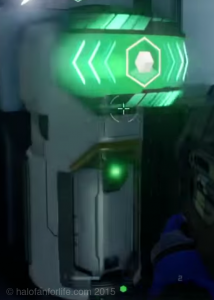 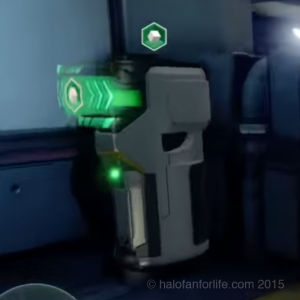 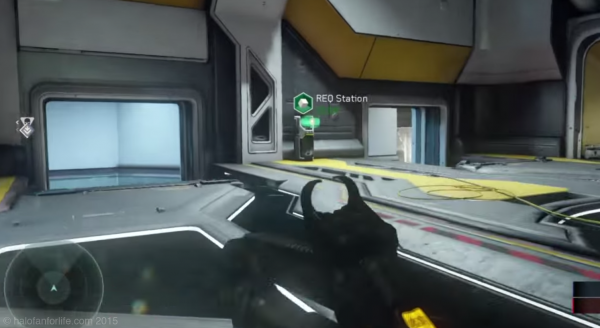 • In Arena matches, you will only be able to redeem Rpts for aesthetic things such as weapon and armor skins. The reason for this is so that gameplay remains as even as possible. One example is not being able to starting out with a Scorpion at the beginning of the game.
• In War Zone, you can redeem your Rpts for anything, be that aesthetics, weapons, vehicles and assassination animations. In War Zone, matches are given a REQ level that says what level of weapons and vehicles can be brought into the match. You will also need to have enough energy point to be able to call in weapons or vehicles.
•Energy points are earned through gameplay, both as individual and team performance. So more skilled players will earn energy points quicker than those less skilled. Though all will earn energy points as the game progresses and your team performs certain tasks. Those tasks may include slaying the opposing team, slaying an AI boss, AI enemies or destroying the opponents core. There may be more, but that is all I can find, ATM. The following pics show items that can be chosen at different stages of the game as higher levels of requisitions become unlocked. At top right in each is the energy point indicator you currently have as well as the current level of REQ available to purchase with your Rpts:

As you can see by the first pic, the player has one energy. 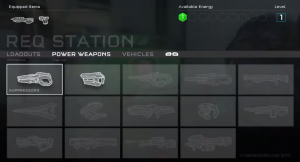 In the next pic, the player now has three energy and more options for weapons to choose from.

Here they have selected a Storm Rifle. 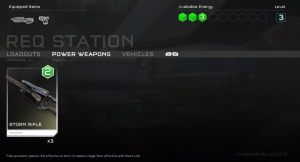 At this point the level of REQ has reached 5 and the player has the amount of energy needed. Yet more weapon options are available, including power weapons. 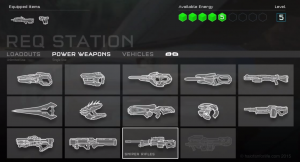 Similar to weapons, you can call in vehicles. The REQ level is 6 here and the player has enough REQ to call in a Mantis. (on that note, we see 343’s word for plural Mantis is Mantises, not Manti as many have joked) 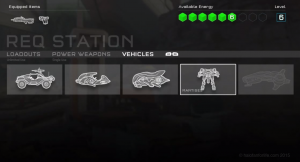 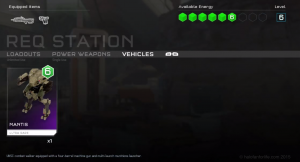 A little further along, now at level 9 the new Forerunner Phaeton is unlocked to purchase. 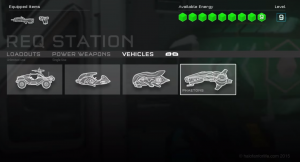 Once again the player has selected the new item. 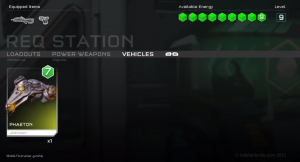 • Once you have unlocked an aesthetic item, it will remain unlocked for good. Weapons and vehicles called in are one-time use in the current game you are playing in. So spend them wisely!
• You will also earn Rpks by leveling up your Spartan in SR (Spartan rank) and completing commendations in multiplayer.

Micro-transaction REQ Packs:
Yes… micro transactions have finally come to a ‘AAA’ Halo title. For those who have played Spartan Assault you will be familiar with Mts in Halo. But this is a first for a triple ‘A’ Halo game.
As described by Josh Holmes of 343, Rpks can be bought ‘as a matter of convenience’.
There is code in place that is supposed to keep people from exploiting bought Rpks. This seems to mean it keeping people from spawning with power weapons or vehicles from start. Though again, I’m not positive on that yet. Once it’s been defined, I’ll update this article.
Again, in Arena matches, you can only redeem for aesthetic items. So don’t worry there about unbalanced gameplay.

REQ content updates
343 will continue to release new REQ content after the game has launched. All REQ content can be earned through normal gameplay. So you need not buy Rpks for real money, unless you want to unlock things quicker. That is YOUR choice. 343 is not making you buy Rpks.

And finally… a portion of the money from bought Rpks will go towards prize pools for future Halo Championship Series tournaments.

If you feel I’ve missed something or have found a verifiable source for a better explanation, please e-mail me at sal@halofanforlife.com.

As always, thanks for reading!
-Sal