Well, this year’s LAN has come and gone. Games were played, prizes awarded, eats were had and everyone walked away with a few goodies as well.

No to be more specific… 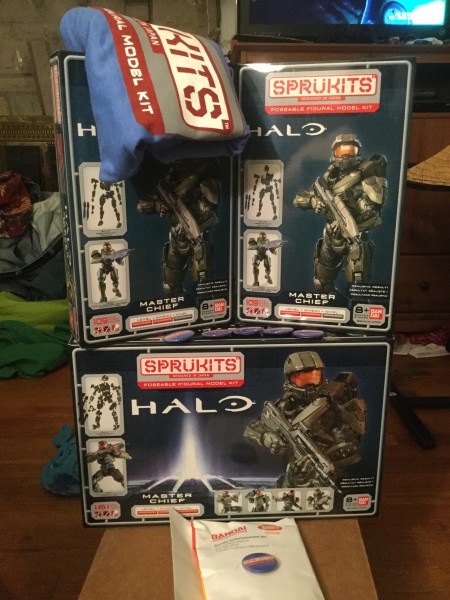 A HUGE thanks to those folks! They were generous with their prizes and I want to thank them properly!!!

While I was preparing for the LAN, my bud Zach (@TheHaloArray) was in New York city and snapped this pic of Halo 5 Guardians prominently on display at Toys R Us in Times Square. Looking GREAT! 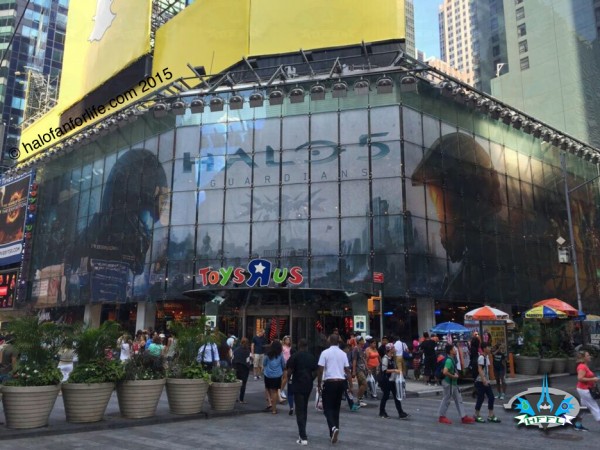 I received some items from 343. Posters from one of the folks, while another sent me a slew of varied things. Halo 4 Soundtrack, RvB season 12, Forward Unto Dawn Blue Ray, HSC stickers, and more. I filled out the rest of it with some Halo Mega Bloks sets (they didn’t donate anything this year, surprisingly); McFarlane figures, Micro sets, and Avatar figs. as well, my bud Rhythmic Warrior supplied us with his ever cool Pipe Cleaner Red Spartan figures!

(Apologies for the dark pics of the prizes. These were taken by my wife who hadn’t realized she had a dark filter on) 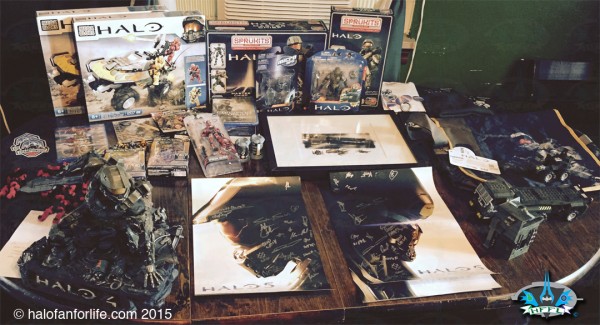 Some close ups of the prizes: 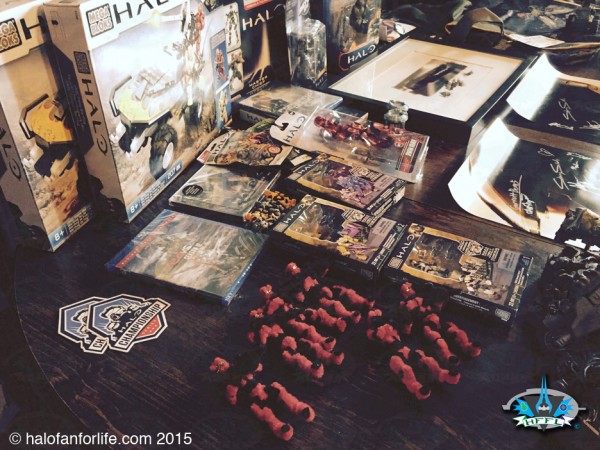 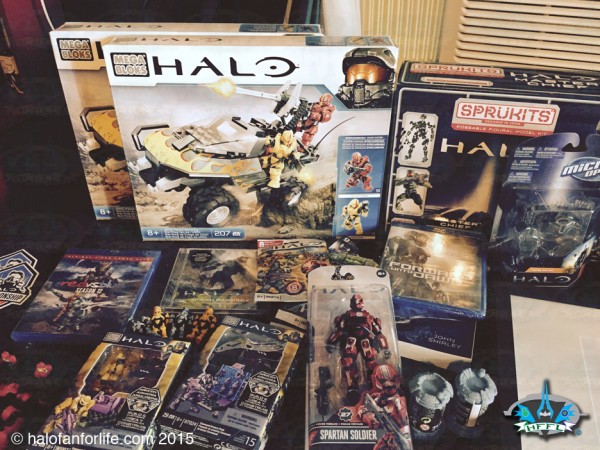 The drawing in the middle (not posters) of this was not a prize. It was something I was showing. It is actually a signed drawing of the Forward unto Dawn by “Sparth” of 343.

Two of the posters sent were signed by various members of 343. Pretty cool! 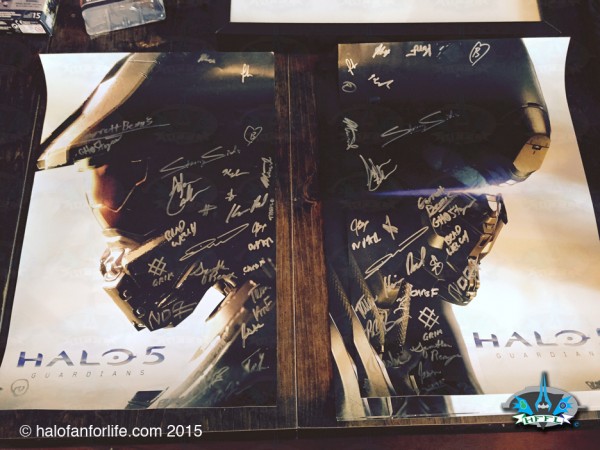 The Mega Bloks at bottom were not prizes either…just a Custom I was showing. I didn’t have enough room on my display table, so I had to put a few things on the prize table.

The messenger bad was another item sent by 343. VERY cool!! 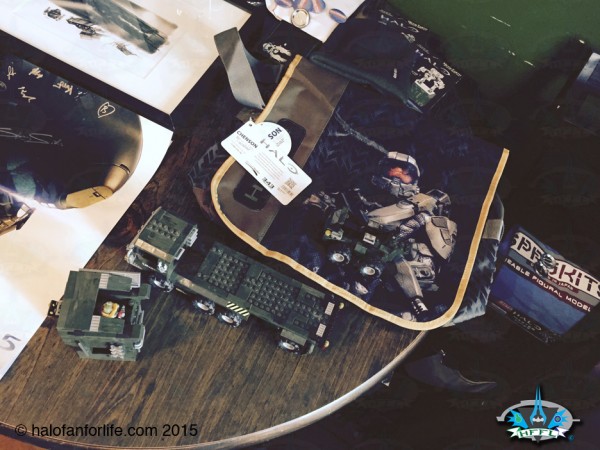 Speaking of the display table, each year, I display Halo merchandise that came out over the previous year, between LANs. Not everything mind you, as that would be a lot. Some things though I bring out again, even it they are new, as they are still pretty cool pieces.

(Again, dark pics by my wife…sorry folks. I was busy with running the LAN. I only got in a few pics myself.)

The Cortana seen here was an April Fools Gag that my wife concocted. She painted it herself. 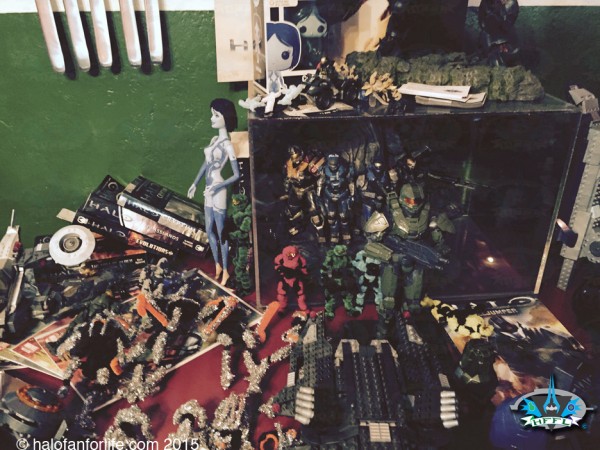 Lots of Mega Bloks sets as you can see. The UNSC Firebase at bottom mid to right, is a new set. I’ll be posting a review on that shortly. Zach and I actually built this the night before the LAN. You’ll see pics of that in the review. 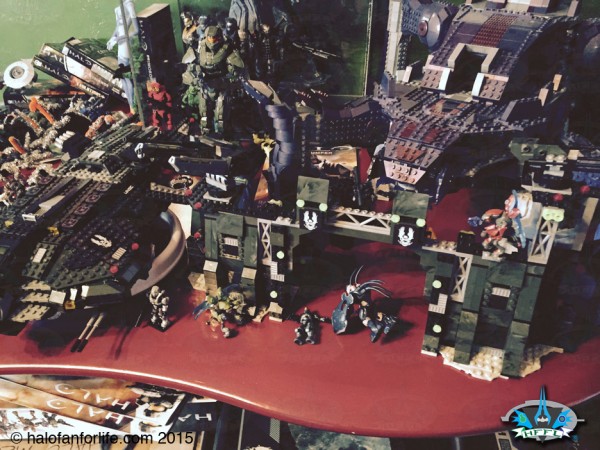 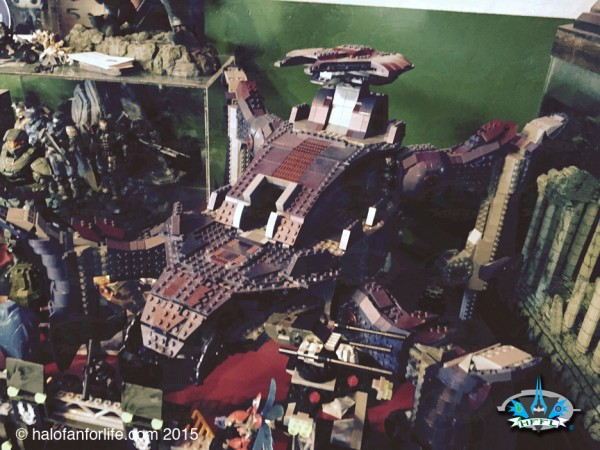 We supplied a nice assortment of eats. 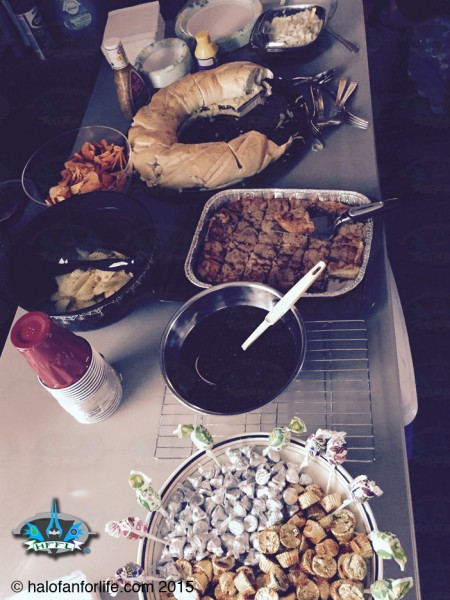 Better shot of the sandwich ring. (This is my pic…) 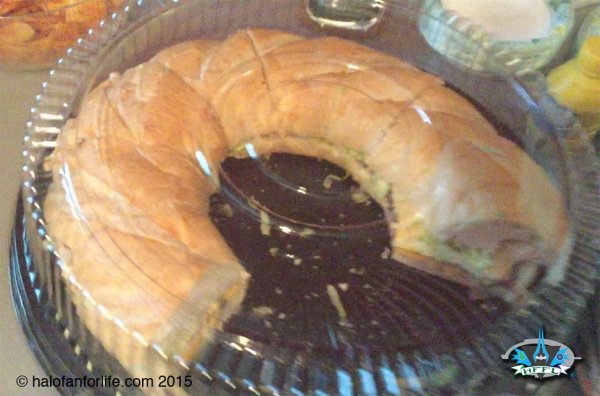 This is my wife’s soon to be famous ‘Sopapilla Pie”. 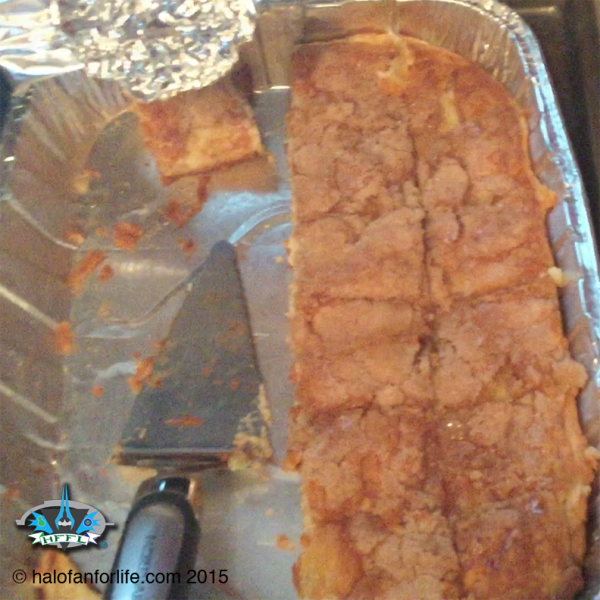 We had a candy bowl as well, if you had a sweet tooth. 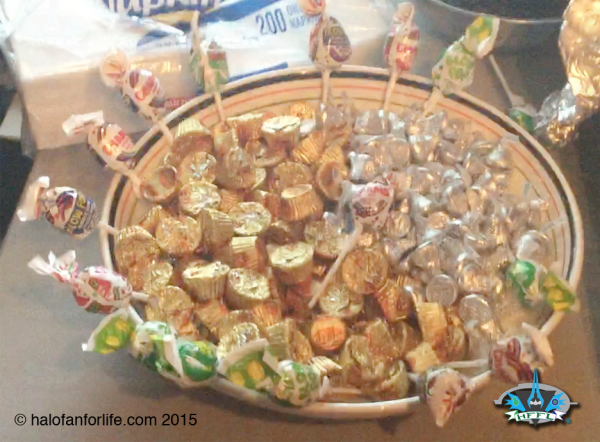 Not picture in close-up are a couple of bowls of potato chips and Lasagna!! MMM, that was so good!

This was part of the set-up for the LAN. 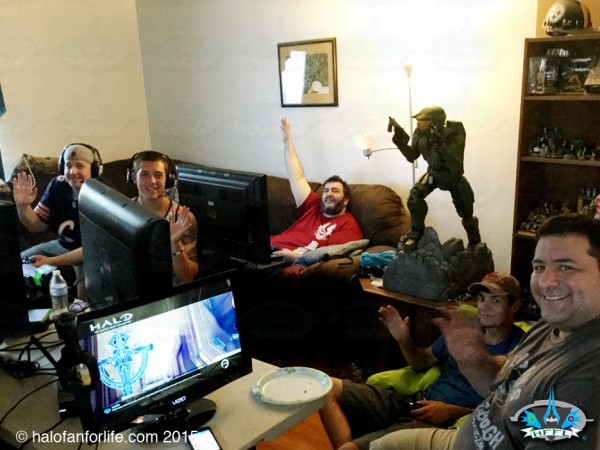 Left to right: Zach, Brandon, Me, Darrn (in green bean bag chair on floor), Pens Halo (aka, the other Sal, LOL).

Everyone brought their XBOX Ones. For those that didn’t bring TVs, we had a few extra around the house. None was left not playing when they wanted to.

The 2nd and 1st place winners of the FFA tourney. Darren (2nd place) and Brandon (1st place). Each got a Mega Bloks Flame Warthog, while Brandon additionally got a Sprukits Master Chief set. 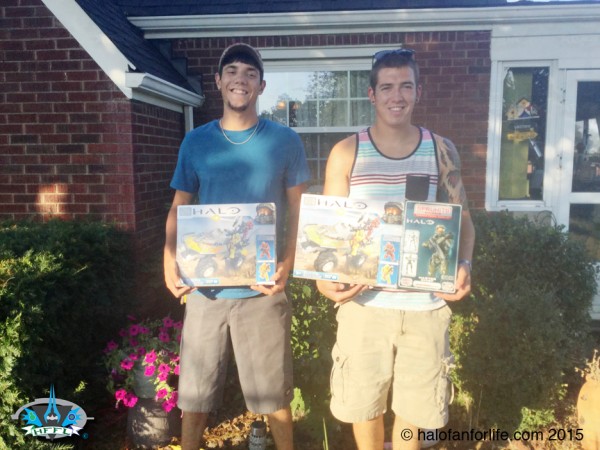 Brandon was the champ last year. The year before that, he came in second place. The guy’s pretty good. I’d like to see him go pro! 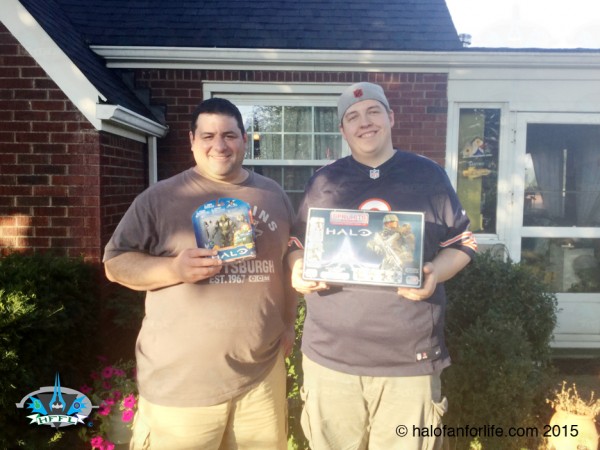 Zach built his set quickly and sent me a pic. 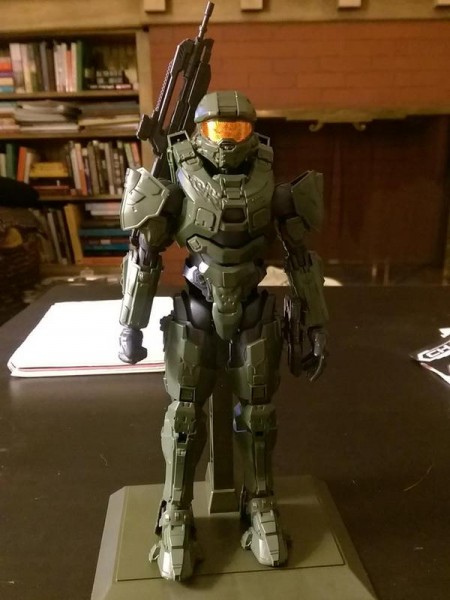 Here’s what Pens walked away with after the LAN ended: 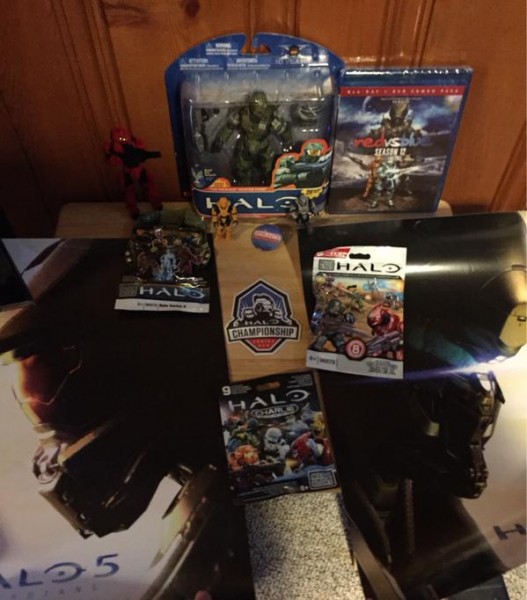 That’s a good haul, considering the cost to attend was only $10. (Not to mention the food and such.) Folks, you really have got to come out for this. It’s a LOT of fun!!!

In between gaming sessions we ate and ate….In fact, so much so that we actually skipped the usual Primanti’s gathering afterwards. A few folks had to leave early, but that didn’t stop the rest of us from gaming on. As scheduled, the LAN went on until 10pm.

I said my good byes to those leaving then and breathed a sigh of relief that another HFFL LAN was a success. Zach (who was staying for another day) helped me clean up a bit.

The next day, My wife, Zach and I met up with Zach’s girlfriend and one of her friends at Primanti’s Zach’s girl and friend had stayed in NYC to finish out their visit with his GF’s family. 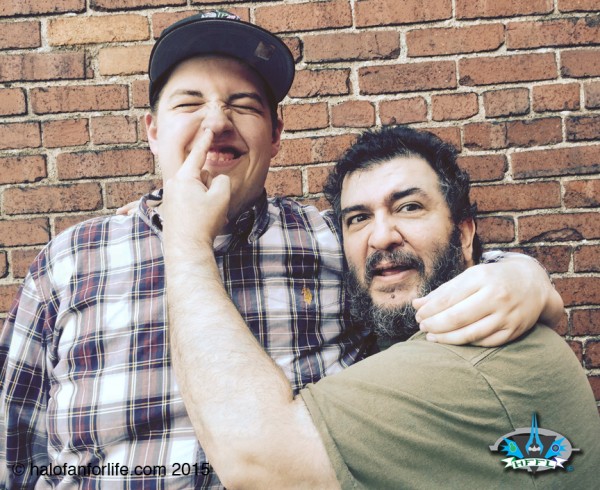 And with that, the LAN weekend was officially over.

Next year, I want this to be a LOT bigger. I’m going to be contacting other Halo communities to see if they will attend. What I’d like to do is rent out a hall and have Halo communities display their wares as well. Of course a Halo tourney will happen. (God, my dream would be to have an official HCS tourney…but that might be a bit big. Won’t stop me from trying thought). Basically, I want to grow the LAN into a Halo themed convention.

For those who can’t get to PAX East (Bostom), SDCC (San Diego), RTX (Houston), of the main PAX con in Seattle, I’d like to offer them another location, that being right here in Pittsburgh. It’s a lofty goal yes, but one I’m most willing to undertake! It helps that I have nearly 20 years of advertising and marketing experience.