The following is a reblog from Halo Waypoint:

A few weeks ago, we blew the lid off the REQ System, breaking down how everything in the system works. We also revealed a small group of REQ cards that you’ll be able to unlock when Halo 5 releases. Today, we’re revealing even more REQs that you just might be lucky enough to unlock in a REQ pack. Many of the REQ cards available, such as the Oathsworn below, have a history deeply rooted in the Halo Universe. When wielding one of these weapons in Warzone, you’ll undoubtedly feel its power and understand its history. 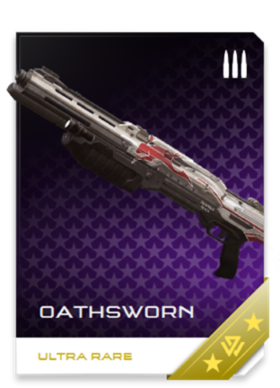 SPARTAN-II’s are drilled to be clinical, efficient, and detached from the chaos of battle. Weapons are simply tools to be used and discarded as the tactical and logistical equation changes, without any sentimentality or emotion. Spartans are expected to use their extensive experience and the resources available to them through NAVSPECWARCOM to personalize their weapons only enough to maximize lethality and ergonomics, with no wasted time or materials.

At least for the first few years of the Covenant War this attitude prevailed, but it was not long before Spartans began to pay more personal attention to their wargear, making small, unapproved modifications and adding charms that reflected the idiosyncrasies of their personality and mementos dedicated to dead comrades and burning worlds. Subtle at first, these were the first signs that the horrors of the Covenant War were eroding the supposedly unbreakable indoctrination that had forged the SPARTAN-II candidates into super-soldiers who strode the battlefields of the 26th century like war-born demigods.

Oathsworn is one example of these personalized implements of death and destruction. The current Oathsworn was not the first, nor will it be the last. Many Oathsworn’s have been abandoned on various battlefields over the years, only to be rebuilt for another battle – another mission. Each one is subtly different, though the markings have remained the same for years. The words whispered while it is carefully rebuilt and tuned change each time, but not the intent.

Memories of loss and dreams of vengeance, sealed in steel and composites. Mythic Shotgun with increased damage, accuracy, and rate of fire. The user’s movement speed is also increased while Oathsworn is equipped.

HFFL: I look forward to obtaining this weapon. I do not use the shotgun all that much, but the skin on this is pretty cool! So, if I get it, you can bet, I’ll use it!

Here are some more REQs varying in type and rarity that allow you to customize your Spartan, and yourself.