This is a reblog from Spartan Games website, with some commentary by me at the end of the article):

First up is Kenneth Peters from 343 Industries, one of the people tasked with helping Spartan Games keep its Halo tabletop games accurate to canon. Kenneth sets the scene for where these exciting new models fit into the Halo Universe.

CAS ASSAULT CARRIER
Assault carriers are monumental symbols of Covenant power, and among the deadliest implements wielded by the Prophets in their war against humanity. Each assault carrier is a potent instrument of conversion and compliance, capable of deploying thousands of troops and numerous fighter craft, backed by an array of devastating energy projectors that can burn entire continents to ash. A single CAS is sufficient to quell all but the most pernicious heresy, rebellion, or parasite outbreak. Colossally expensive to construct and few in number, the rare loss of an assault carrier is mourned by the entire Covenant.

Every major Covenant fleet has at least one assault carrier at its heart, if only because carriers themselves require a significant number of support vessels when operating away from High Charity or major outposts. Multiple carriers in a single fleet is unusual, but not unheard of. For example, the crusading Fleet of Sacred Consecration, commanded by the Prophet of Regret himself, is led by twin assault carriers, the Solemn Penance and Day of Jubilation. Together, these massive warships have scoured dozens of human worlds and brought righteous destruction to those within the Covenant who dare stand in the way of the Prophet’s holy mission.

PUNIC-CLASS SUPERCARRIER
The Punic and its sister ships were the first of a new breed of warships drafted to fight a new style of colonial war in the waning years of the 25th century. Officially designated Space Control Vehicles, these massive carriers could transport and sustain entire Colonial Military Authority (CMA) expeditionary and interdiction campaigns in the remote Outer Colonies for months at a time, crushing dissent and terrorism before it could fester and spread. At least, that was the intent before Covenant fleets threatened humanity with extinction. 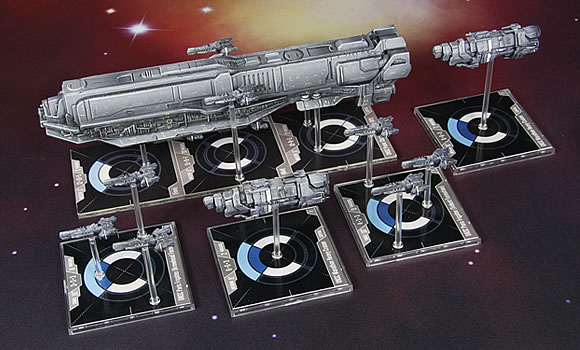 Punic-class supercarriers have served the UNSC well in numerous campaigns and holding actions during the Covenant War, including the heroic last stand above Estuary and as the base stations for decisive counterinsurgency and evacuation operations on Charybdis IX. Unfortunately, the destruction of each supercarrier also means an irreplaceable loss of the elite crews and materiel that slowly erodes the UNSC Navy’s overall effectiveness. By 2552 only a handful of Punics’ remain space worthy, including the Trafalgar, pride of Reach’s defense fleet.

Over to Neil Fawcett now to provide a sense of how these massive vessels perform in Halo: Fleet Battles

The creation of the two largest Halo: Fleet Battles models was a most interesting challenge, but one we embraced with relish. If you think about the UNSC Punic-class it isn’t often you get asked to “build the supercarrier that was present at the Fall of Reach and carried the name Trafalgar.” The Covenant Assault Carrier (CAS) was a relatively easy one, although taking the magnificent Blur Studio’s CAS and making a tabletop gaming model of it was, shall we say, tricky.

We started by discussing with 343 Industries what the background needed to be for these fantastic vessels, and to that was added the visual design drivers that came directly from 343’s Art Director, Sparth. Once the design aesthetic was approved by 343, it was then about making sure the Punic-class performed well in Halo: Fleet Battles. One of the things we liked about the UNSC Infinity was the idea of her berthing Frigates inside her. But with the older Punic-class supercarrier we felt that they should be outside of the main hull, again linking into the idea of showing in-universe design improvements, something 343 sanctioned for the model. So on the underside of the Punic-class is a docking area that has two rails into which ‘docking hubs’ can be attached, and onto these can be attached UNSC vessels. To start with these are Paris-class Frigates, but smaller ships like the Halberd-class will also fit.

THE PHYSICAL MODELS
We opted for a high quality resin material to make both the Punic-class and CAS models. Our choice of material allows us to festoon the models with detail, and a key design goal was to also make both of these vessels very easy to assemble. As you can see from the exploded view images, both are created from relatively few parts, making assembly of the models easy. This design process will also allow us to create custom builds in the future for named versions and their commanders. Assembly instructions are included with each model, along with information that will help in the building of resin models.

GAMEPLAY
Both the Punic-class and CAS are Massive models and both take up three Formation Base Overlays, Fore, Mid and Aft. Although they are technically all the same ship, each has its own set of game statistics and can therefore fight independently and be attacked independently. They are designed to be rugged in gameplay and each has the ability to shatter the enemy, but coordinated attacks will bring them both down, and watching them slug it out against each other is a sight to behold on the tabletop.

The Punic-class is fitted with two Super MACs in Halo: Fleet Battles, which can be fired into the fore arc independently or combined, so woe betide any enemy vessel in front of this attack as a whole lot of pain is heading their way, along with the automatic placement of Vulnerable Markers, something all Covenant Fleet Commanders will fear. While we are on the subject of MACs, the Punic-class is our first UNSC model to feature Port and Starboard mini-MACs – get used to firing them though as more UNSC vessels will arrive in 2016 sporting this weapon system. And for those gamers who love to upset their Covenant opponents with Missiles the Punic-class brings a whole barrel load to the party.

The underslung Frigates attached to the Punic-class play a strategic role within the game. During the Repairs Step of any End Phase, a Punic-class Supercarrier may allow a single Paris Formation Base within 10” to remove a single Damage Marker from its base. This illustrates the Frigates being launched to reinforce formations that have come under attack and taken casualties. A simple, yet most effective game mechanic.

The CAS is a bruiser of a vessel, capable of layout down devastating weapons fire across its various arcs of fire and using high levels of Point Defence and Defence Arrays to protect all three sections of the Massive vessel. Coupled with its strong Damage Tracks the CAS is designed to survive military engagements, soaking up weapons fire and swatting the enemy with its Plasma attacks.

Large hangar bays allow the CAS to deploy enlarged Seraph fighter Wings (up to 6 Flights in each) which can be used for either offensive roles or escort duties. The combined Hangar rating for a CAS is 15

Each Section of a CAS can also replace one of its listed Boarding Craft with a Zealot for no points. This bonus is in addition to the standard number of Zealots available to a Fleet. This makes the vessel dangerous to board, and also gives players more bite to their own aggressive boarding actions – a true Cathedral of the Covenant Faithful.

Whilst gamers can play with as many Massive models as they wish to own, we would recommend that each is used in support of a fleet of other ships. We have placed a cap of one Massive model per every full 1,250 points being played. This fits nicely with the existing Halo Universe canon, but does allow for gamers to play heroic engagements that can see Fleet Commanders throw hordes of Battle Groups at their enemies in a bid to destroy their Punic-class or CAS.

Both the Punic-class Supercarrier Covenant Assault Carrier (CAS) are available to pre-order from the Spartan Games Online Store. The box contents for the new Massive Models are as follows: 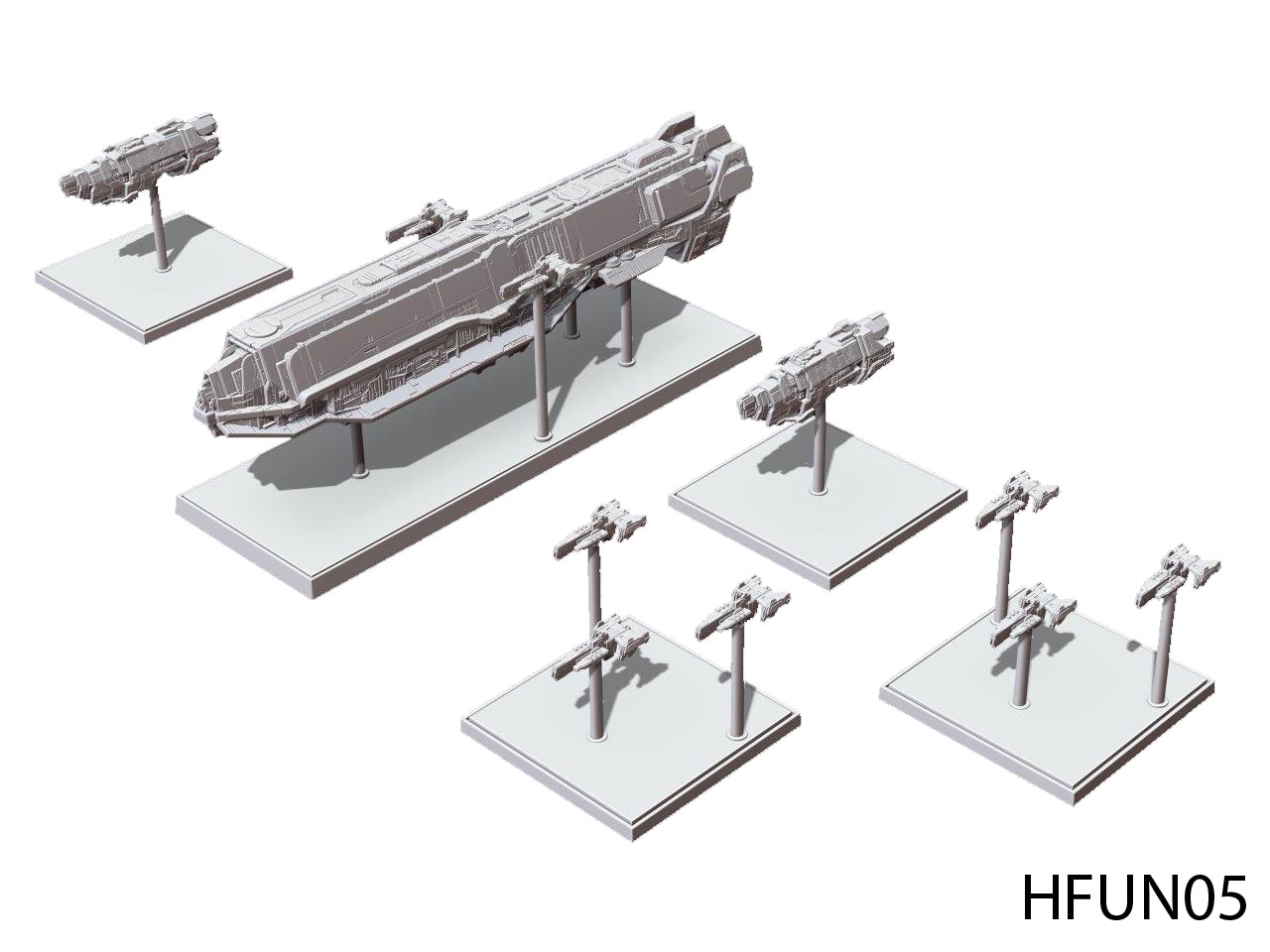 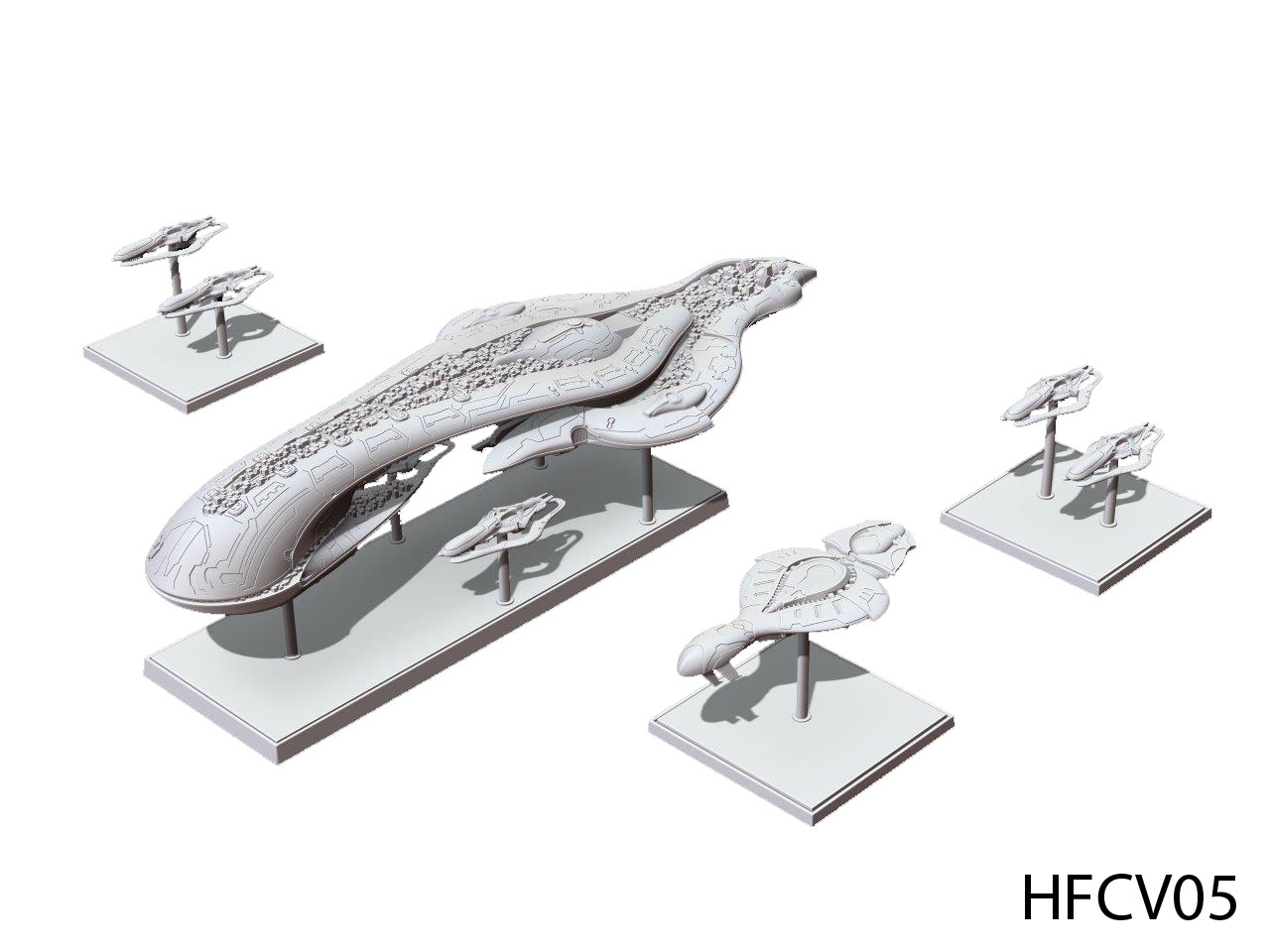 HFFL: These are great looking sets. For me, if I could afford them, I would be getting them for the models themselves and not for the game portion of it as I don’t think I’d have anyone local to me to play this game in person.

The cost is a bit expensive, though the size of these large ships does make up for quite a bit of that, not to mention all the other goodies with each respective set.

I wish these were also made in the U.S. (via China…LOL) as they would likely be much less expensive. If only Spartan Games made the models themselves available without the other game components… But then, games is their business, so it’s understandable.