If you haven’t heard, 343 has made available several sets of REQ pack bundles. These however are for real money only and not available to purchase via REQ points.

Here is what they offer and their respective prices (click to make bigger):

Let’s talk about the potential Pros and Cons of this.

We all know that games have been introducing micro transactions for some time now. Mobile apps thrive on them to survive. Console games have had them now too. So it doesn’t come as a big surprise that Halo 5 had micro transactions to start. At first though, those were only the three packs. All of which could be bought with REQ points: 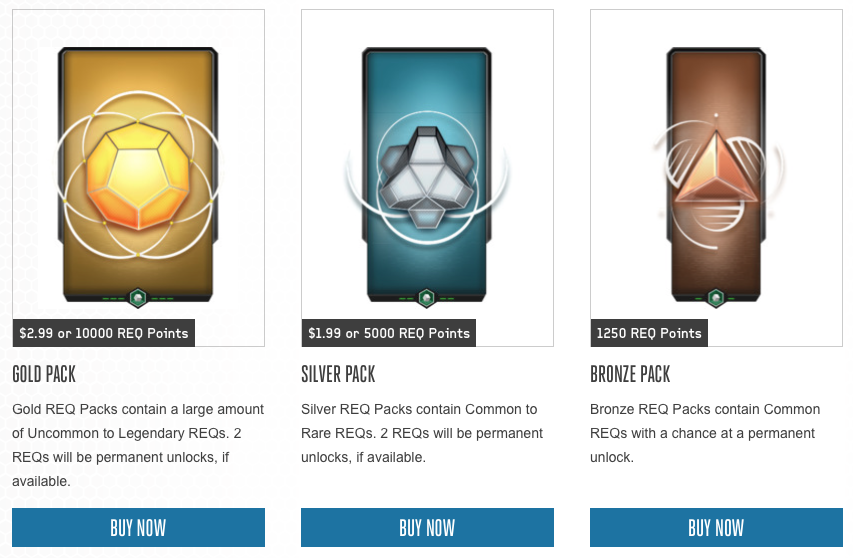 I didn’t really hear much, if any complaints about the Gold and Silver being for real money, as again, you can acquire them through REQ points as well.

With these REQ Bundles, not only can you get Gold, but MANY of them at once. Hear are just some of the gripes I’ve heard over the weekend:

Okay, so let’s talk about those.

We can still earn REQ Packs. Unfortunately though, we won’t be able to amass a ton of REQ points to buy the bundles and get the ‘FREE’ Gold packs as well.
As for the rich succeeding? Well, you can bet with it being Christmas time, there will be plenty of folks who will have some extra spending money that aren’t rich, but may buy a REQ Bundle. As for anyone succeeding at the game, this has varying opinions. Yes, those folks will have better weapons quicker. However, it’s really only if they have the skill will they succeed. If they aren’t so good, they may have a better chance of getting kills with power weapons with splash damage, but many of the other ones require some measure of skill to use. So it’s not a huge advantage.
Noobs catching up? Meh, that’s fine. Again, if they are unskilled, it doesn’t affect you that much.
As to any unfairness, I have to agree a smidgeon here. I’ve busted my hump ranking up to level 88. (Not a dime spent on REQ packs, just REQ points). To me, the solution is to make these bundles available for REQ points as well. However, consider this, by the time you amass as many points needed for the 34 Gold pack bundle (assuming it’s still 10K per Gold pack) making this 340K of REQ points, well, people are going to surpass you anyway, whether it’s using real money or by using REQ points. So you would have to decide if those extra 13 Gold packs would really be worth the wait. Personally, I don’t think it is. But then, I play a LOT of Halo 5 and get packs very frequently.
Warzone being unbalanced? Ha! This is the biggest laugher of all. Warzone IS unbalanced. It’s NOT meant to be balanced. Spartans can call in all sorts of weapons vehicles, boosts, etc, at will, so long as they’ve accrued the pre-requisite REQ level in game to use them. That’s been there from the start and won’t change at all with the introduction of these REQ bundles. In fact, if anything, it will be even MORE unbalanced with more people having more options now to call in more things sooner in their career, than if they would have just earned the points to begin with.

Oh, that brings me to one big point. Pro players and wannabe pros…Warzone is NOT for you to go screwing around with because of the settings. It’s NOT meant to be a PRO game type, So get over that and move along, please. Do NOT destroy this game with vitriol about game settings. I still hold several Pros and wannabes accountable for what happened with Reach due to their incessant complaints about settings. They didn’t want to play Reach the way it was intended, MLG dropped Halo, then Halo’s popularity dropped. That is FACT… okay, moving along…

I really don’t see a big deal with these REQ bundles being added. However, this does open the door for bigger more expensive micro transactions for Halo 6. That is NOT welcome. As a seasoned Halo player, I don’t want to see the game going in that direction. Not only because I can’t afford the high amounts for micro transactions, but I find it really unnecessary to gameplay. If micro transactions DO become necessary, well, I will likely leave. For me it’s about affordability and fun. NOT about spending a ton more than the original cost of the game.

The big benefit of these REQ bundles is that they will help to increase the Halo Championship Series pool of cash to win. On this note, I really do wish 343 would commit at least a small amount to charity. Heck, even just 5% of the current (and growing) $2 million would mean $100K for charity. Even if it were just a paltry ONE percent, that’s still $20K for charity. It’s something they can do, will be great PR for them and may just get more people to buy packs and bundles, knowing their money is helping to support a worthy charity.

So what are your thoughts on this? Please feel free to reply below! I really want to know what you all think about this new addition to the REQ system for Halo 5.