The price is spot on for the piece count. I like the dark green camo effect here. The tank itself looks very powerful. The cannon/turret assembly is bulkier and much bigger than the smaller Scorpion tank. That’s a good thing. The tread assemblies are repetitive (as you’ll see in the pics below). That made this build feel faster than it was.

One thing to note that I missed until the end. I normally open all the bags with pieces and sort them…except any minifig bags. So while building, I thought I was missing 6 pieces. They were all the same piece. It was the flat 4X4 tiles with black lines on them. I was ready to complain about this, until I got to the end of the build and realized those pieces were included with the armory bits for the Recon Spartan. So this explains why you don’t see them on during the build process, but do at the end.

Enough talk, here are the pics. 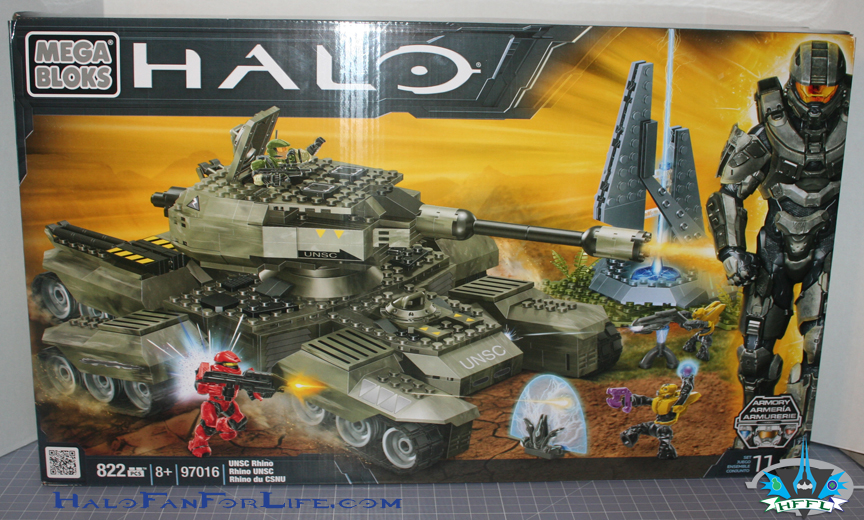 Below you’ll note the “Addendum” sheet. Be sure to follow those two steps for the correct build. 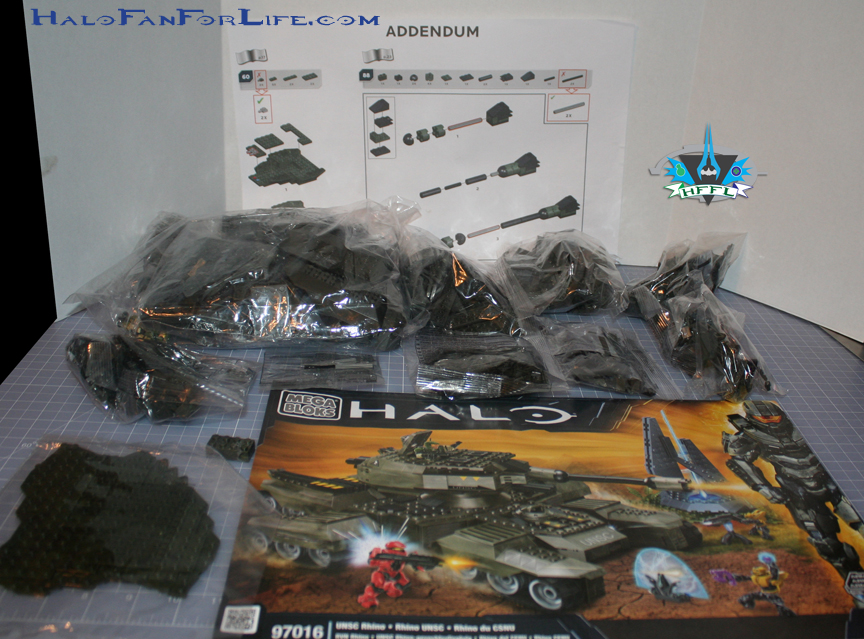 This next pic is of the contents of the big bag above (near top left). 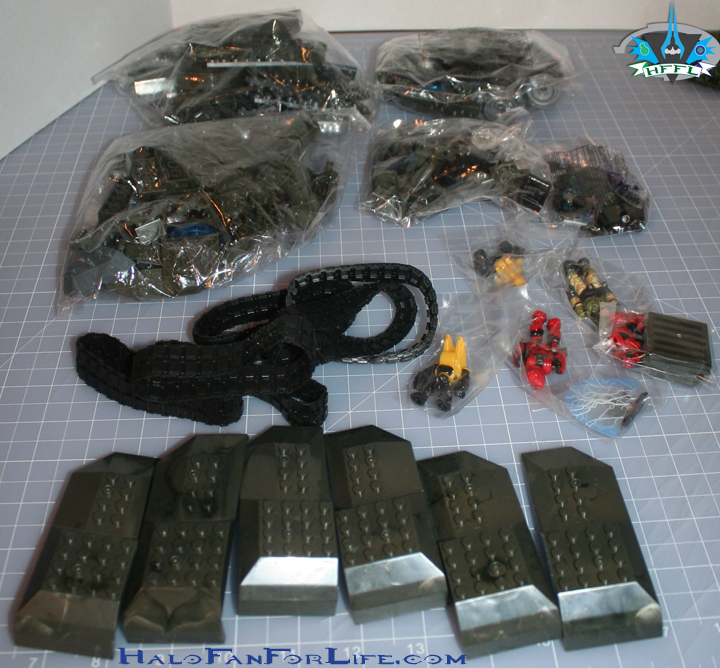 The Forerunner structure was easy to build. I like the color of the structure. I really like the green baseplates. I hope more of these type of baseplates show up in future sets. They really help to flesh out dioramas and add color as well instead of just sticking a set on a wooden shelf. 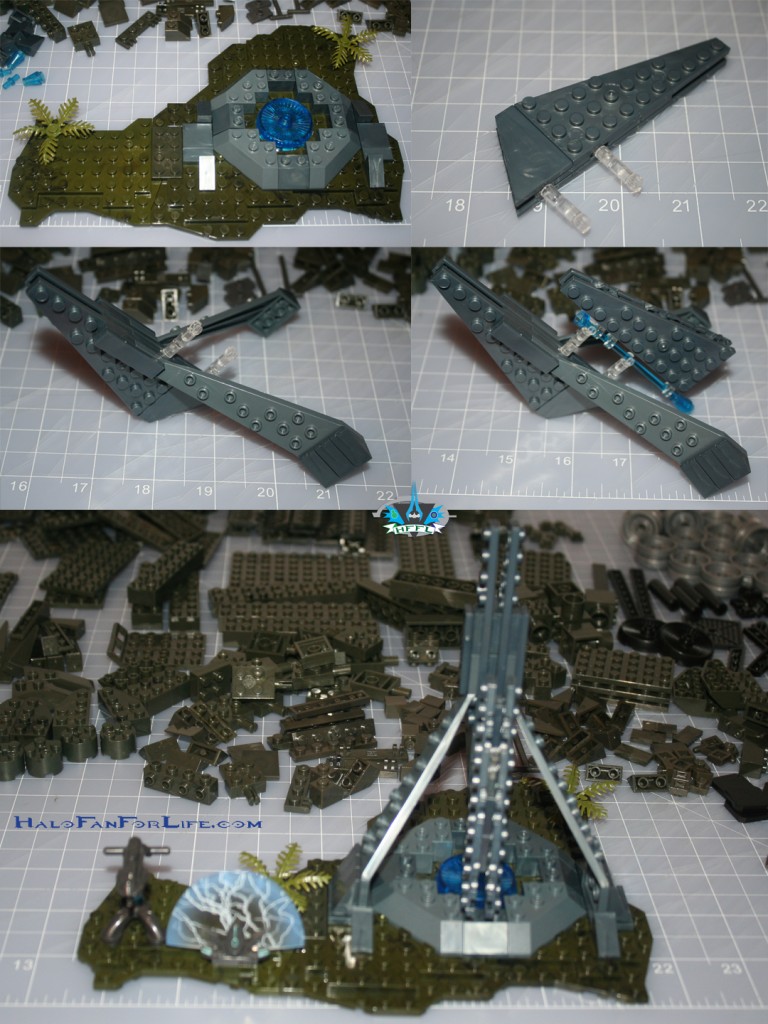 In this next series of pics you can see that the build for each tread assembly is the same. Three face one way while the others face the other direction. The stabilizing “feet” are the same build and can be put on any opposite two treads. 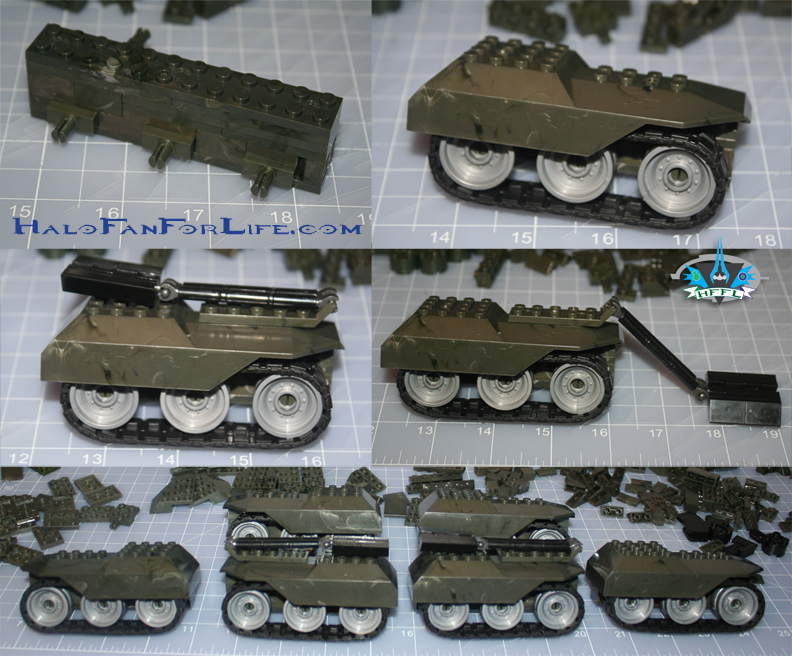 The turret assembly was a fun part to build of this set. MEGA really knocked it out of the park with the design of the turret. Great angles, bulky looking as it should be. It just feels powerful. 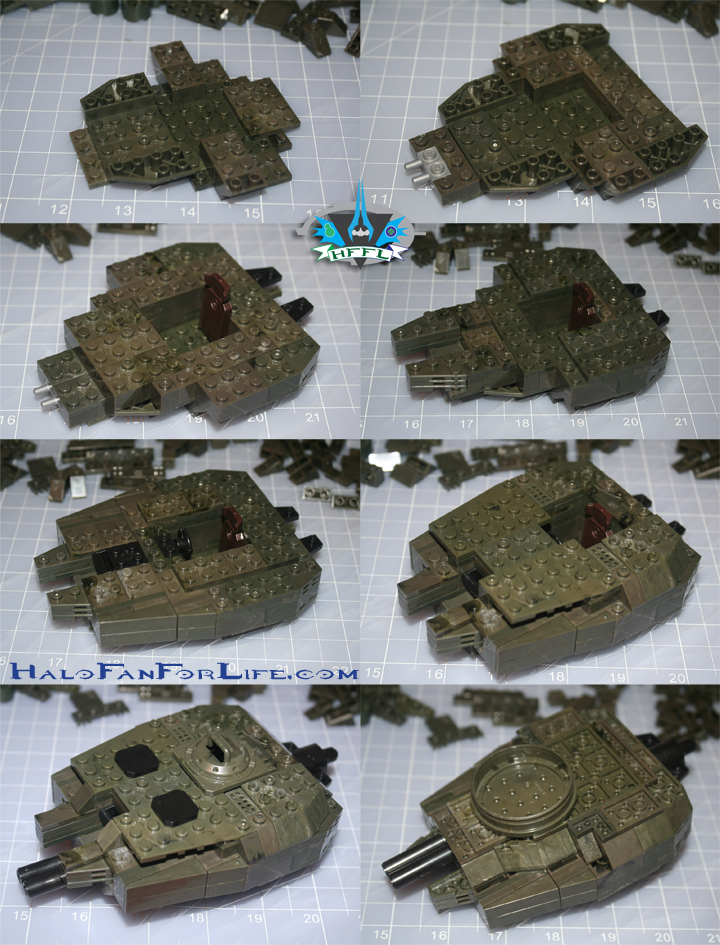 The cannon assembly was quick, and much MUCH better than the Scorpion tanks cannon. 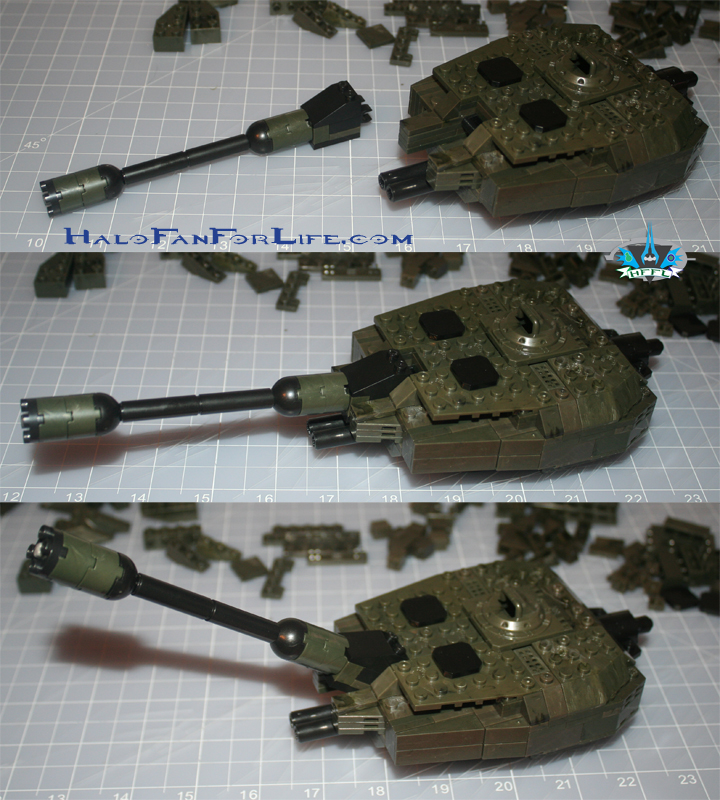 The next pic series is of the body of the Rhino. This was the most extraneous part of the build. It wasn’t until about half to two thirds of the way through that I really appreciated the design and aesthetic of the body build. It’s sturdy and has some black parts that add to the look of the body. 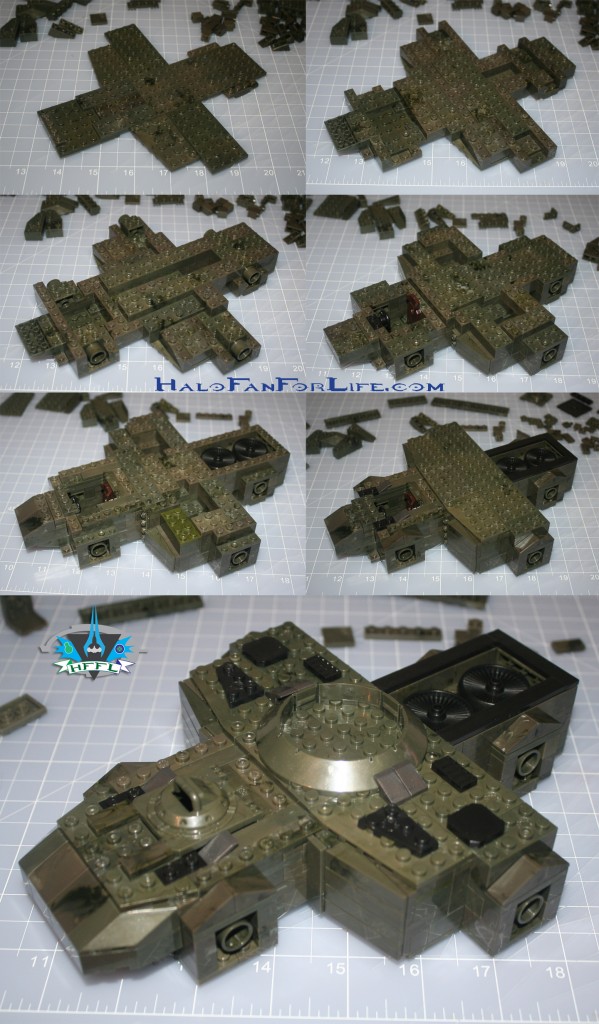 The minifigs, weapons, and accessories (minus the Plasma turret and deployable cover-seen in next pic): 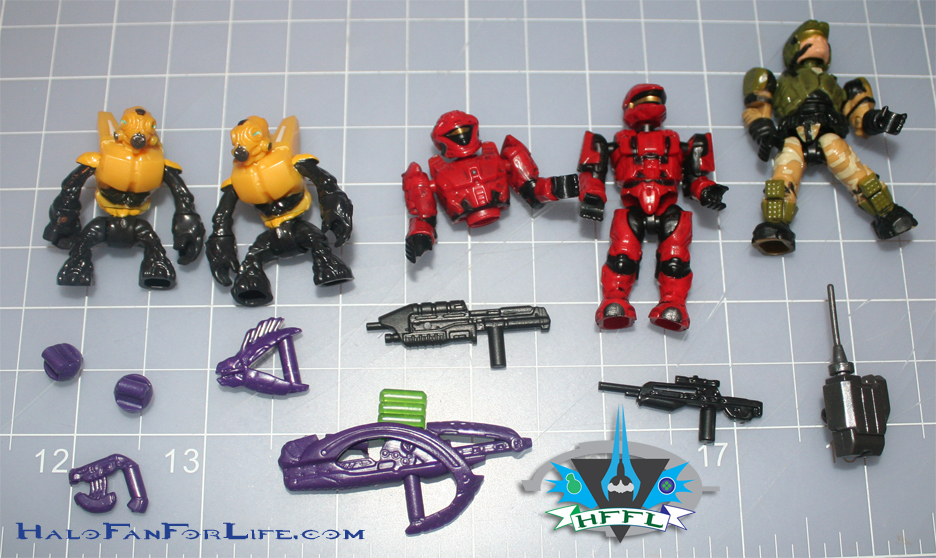 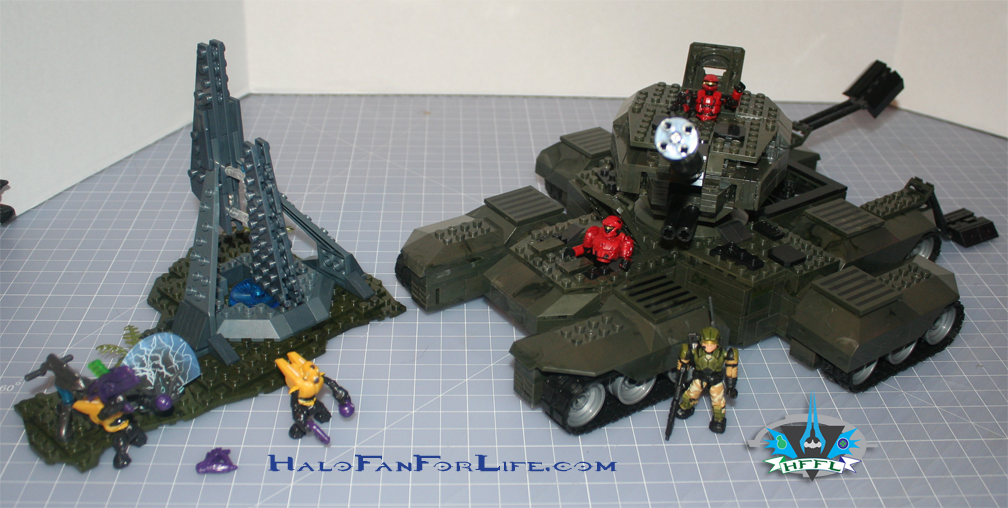 Leftovers and what I did with those parts. 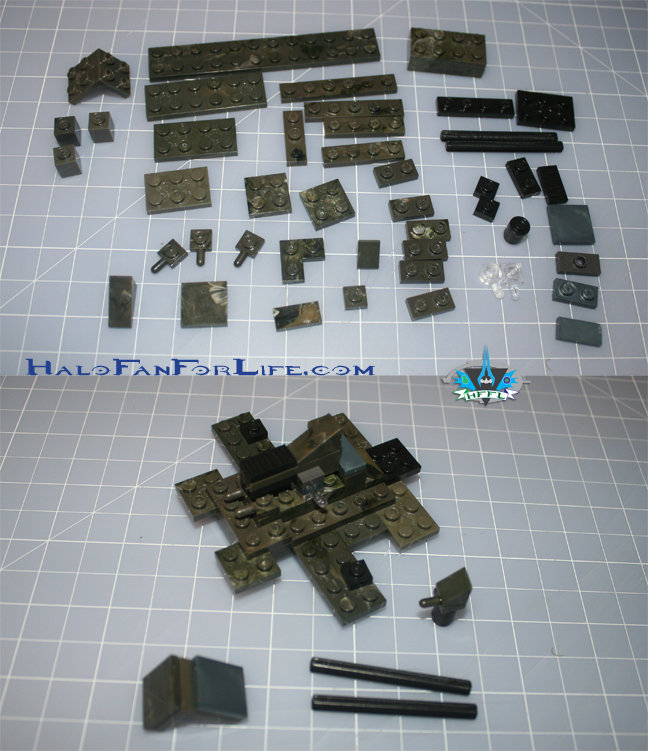 Summary: This is a great set. The repetitive build of the treads made it easy to build and quick. The overall design of the Rhino is spectacular. Well built and sturdy, it screams “POWER.” I enjoyed watching this come together as I built it. (with a slow phase in the body build) If you missed the Scorpion tank, then by all means get the Rhino. It’s a WAY better tank. I hope it makes it’s way into Halo 4. If not, I’ll still be very happy to have the set. If you did get the Scorpion and are on the fence about this tank, please allow me to gently urge you (by that I mean push heavily) into getting the set.

Overall Rating: 5 out of 5 medals.