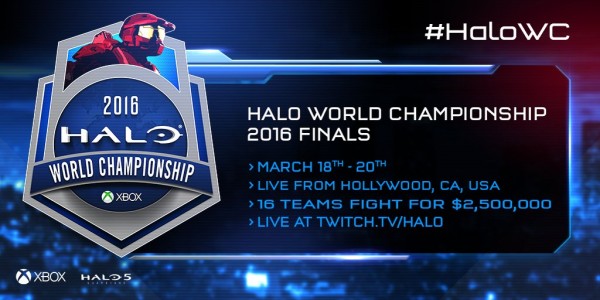 Unless you were in a cave on a glassed world, you probably heard that the Halo World Championship was this past weekend. Certainly, if you have been coming to the blog here, you already knew that.

Well, just in case you didn’t watch the event or maybe even don’t know the results, I’m here to give a bit of a review of what transpired over the course of the weekend. 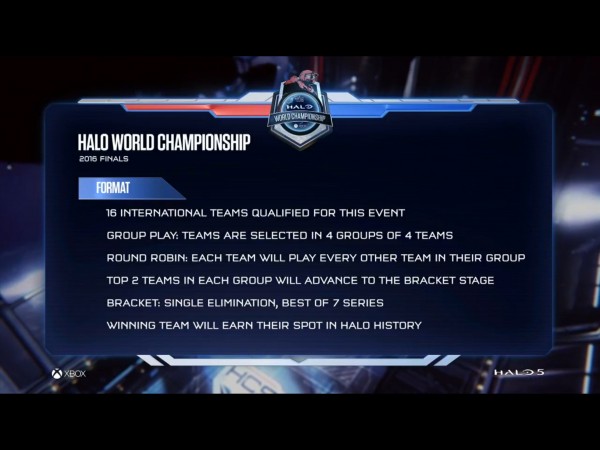 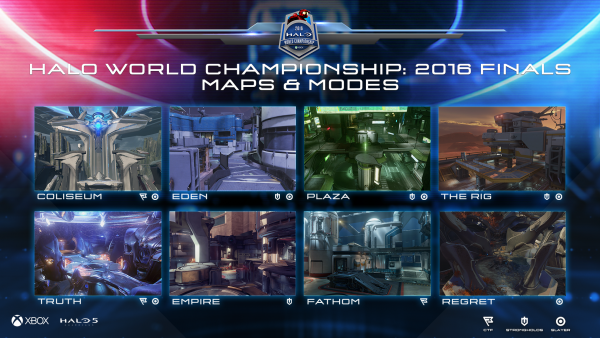 Here’s a look at the primary 4 casters for the event (though there were several others at the second stage as well); Left to right: Walshy, Simms, Braov and Goldenboy 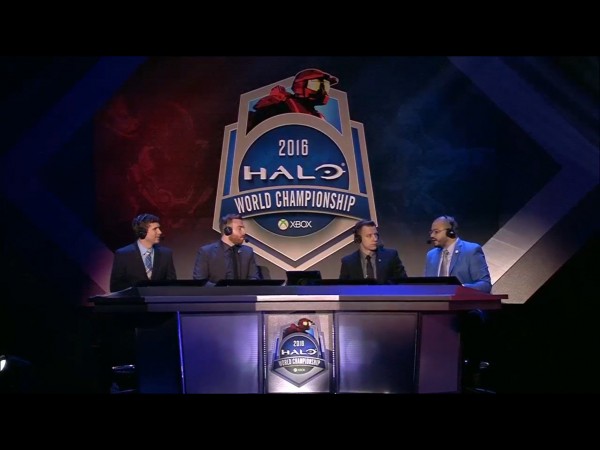 The 16 teams that made it to the event were sorted as such. 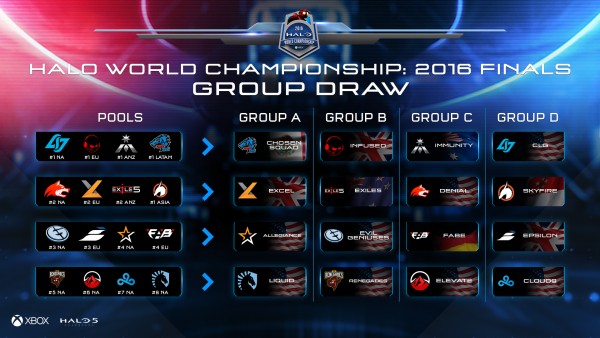 Teams then played in a round robin style of play within their respective pools. They each played 3 series best of 3 games in each series. The top TWO teams from each pool would then move on to the elite eight bracket play. 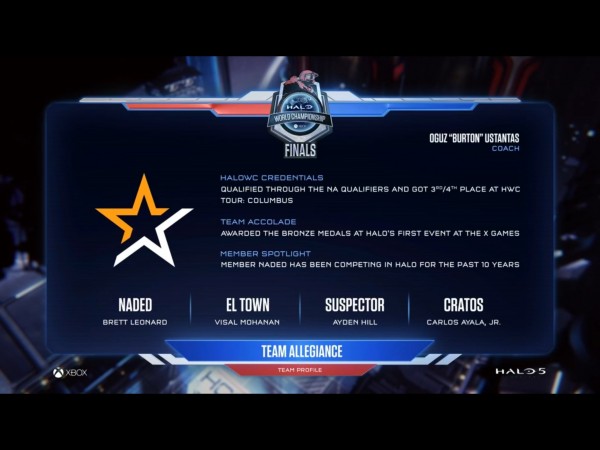 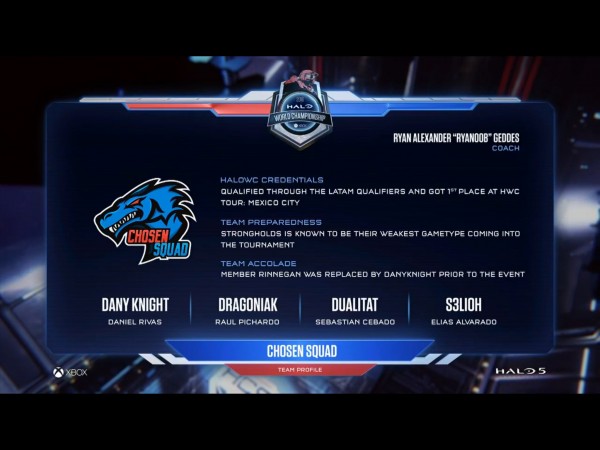 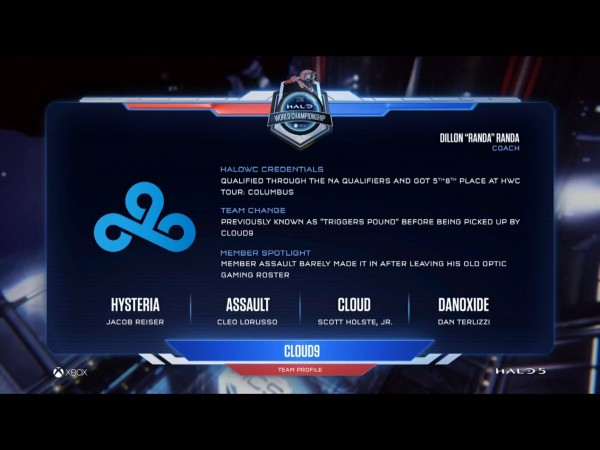 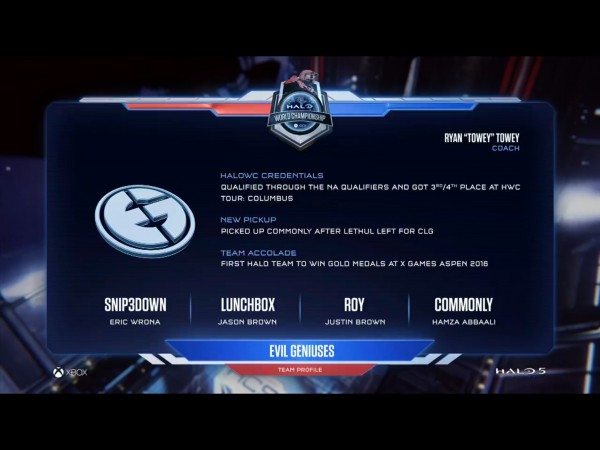 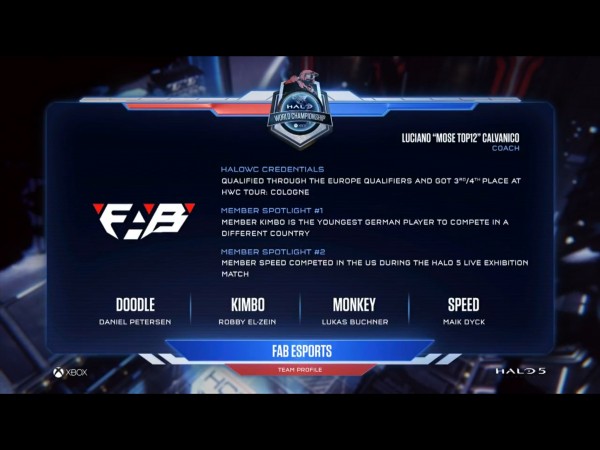 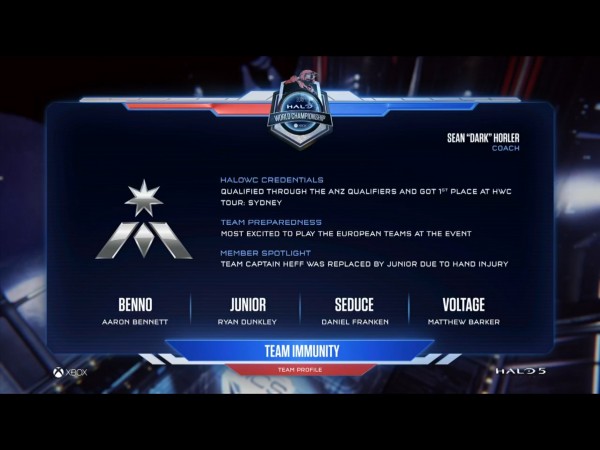 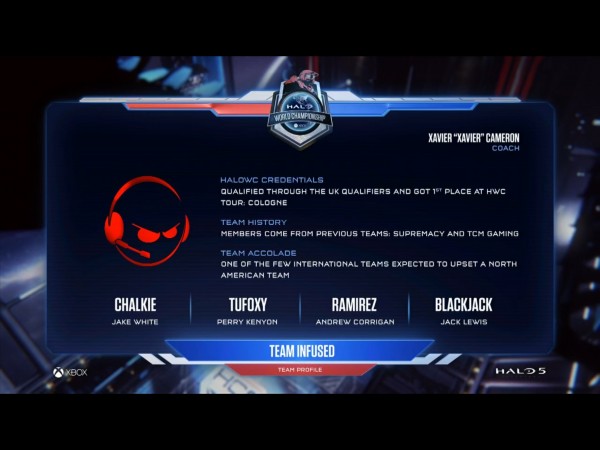 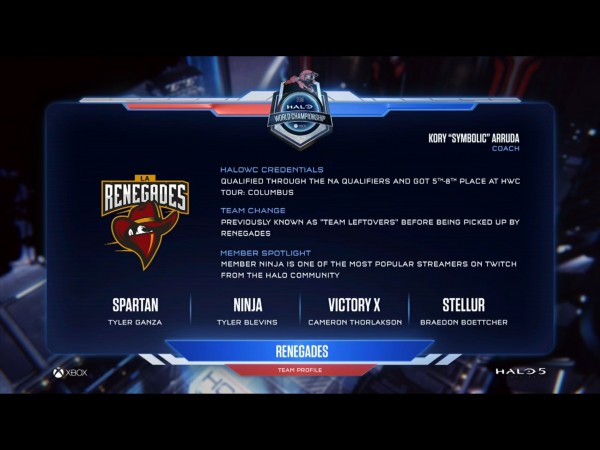 The first day saw this line-up of matches between the teams and on which stage (either main or second) they played on and at what times. 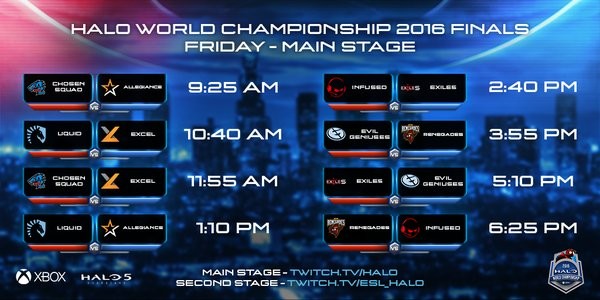 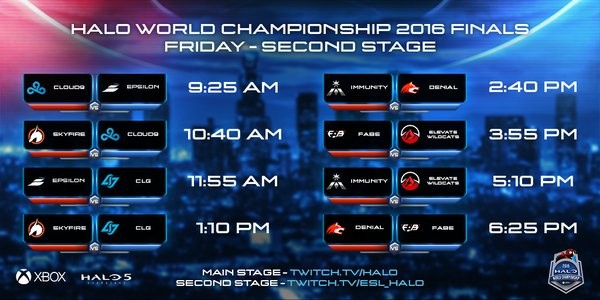 One major upset at the main stage was Renegades over Evil Geniuses (EG). EG was one of the two favored to make it to the final. For them to lose a series in pool play was BIG, and would later be rather telling of their gameplay. It also showed what the loss of Lethal, who moved over to CLG from EG meant… 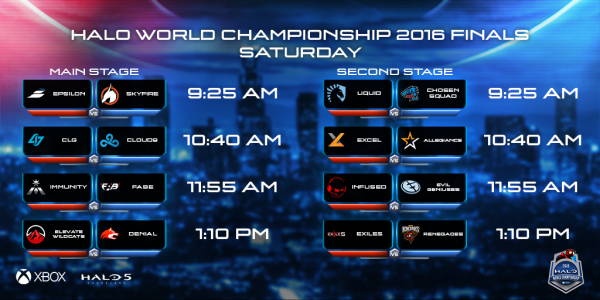 After the dust settled, this was the Elite Eight bracket from the first and second place finishers of each pool: 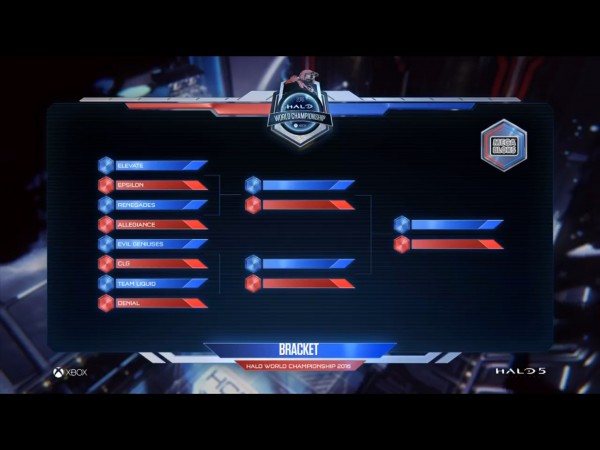 There were a couple of surprises here. First on the good side, Epsilon a UK team had made it to the Elite Eight. This was a FIRST for ANY international team outside of the North American teams to make it this far into Championship tournament. On the bad side, the 8 spots were picked at RANDOM… This afforded the chance of CLG to be matched up against EG in the first round. That was something unexpected and surprising to many in the community. It meant that the two favorites to go all the way would face off early and one was going home. I have to be honest here. I was okay with this as either EG or CLG had one every tournament (with exception to one) leading up to the Championship. So at least one of them wasn’t going to win this time around. I’m a huge supporter of the underdog and I think it’s MUCH better for ANY sport if the underdog wins. It shows that even the best can fall and the not so best can WIN!

The winnings for placement were set as such:

Bracket play for the elite eight consisted of ONE series best of 5 games. No double elimination here! Unforuntately, Epsilon’s run did come to an end here. However, I was very happy with their performance and have to say that they should be a force to be reckoned with in the future! The next slot of Renegades and Allegiance was the second important story to come out of the Elite 8 bracket. Renegades was up 2 games to none. In the third game, Renegades went up 2-0 in CTF on Coliseum. They looked like they were going to sweep Allegiance in what would have been a big upset. However… Allegiance came storming back to get 3 unanswered caps in game three and gave themselves a shot to move on. They proceeded to win game 4 of Strongholds on Eden. So the series looked like this at that point. 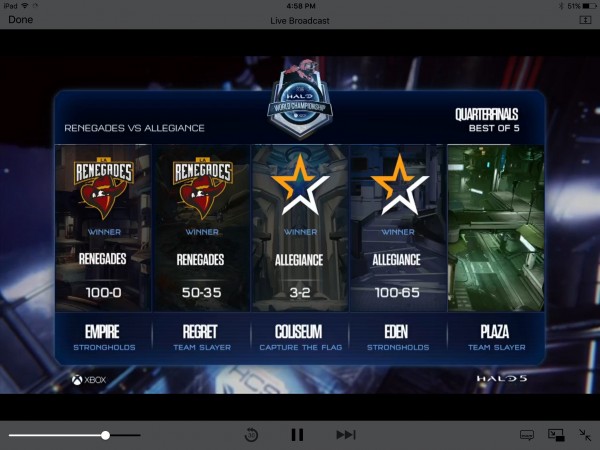 Renegades had a shot at still winning this. However, after having lost 2 games and now being pressed against it, they fell and Allegiance won to move on to the final 4 bracket.

The biggest story as eluded to earlier was the matchup between CLG and EG. This was expected to go the distance in a 5 game match. CLG would have NONE of that and would go on to SWEEP EG in that series. The loss of Lethal was most definitely felt by EG here. Not only had they lost him, but to CLG who then swept them. That was adding a HUGE amount of insult to injury, so-to-speak.

The matchup between Liquid and Denial was a good one with it going to 5 games and Denial coming out the victor. 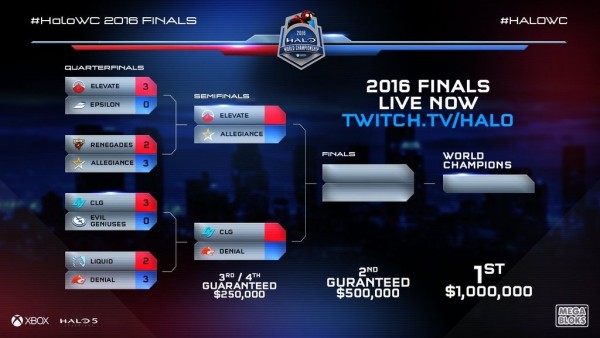 At this point, Allegiance and CLG were the only two tournament winners left in the Championship. Would Elevate elevate their play? Would Denial deny CLG?

Interestingly enough, both of those teams wouldn’t go down easy in the best of 7 gameplay and lost 2 games to 4.

This meant the Allegiance and CLG were the two going on to play for the $1 million grand prize!

Oh and not to mention these HUGE rings (as worn by Bonnie, Kiki, Josh and Frank). 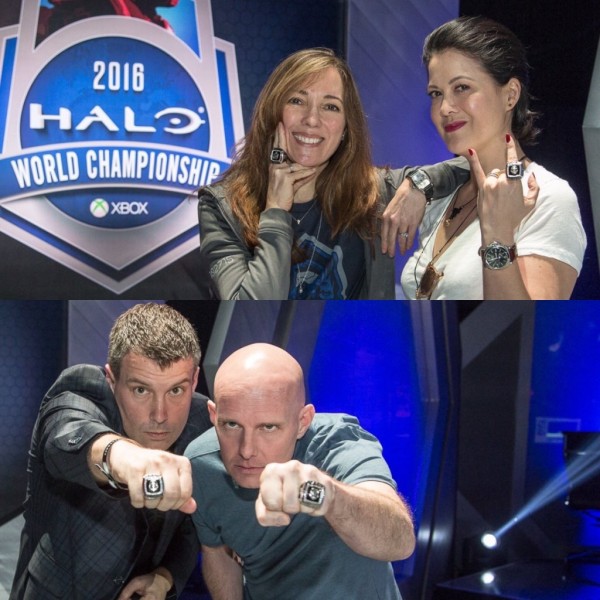 The story of Lethal had been told several times at this point. Another more poignant story was that of Naded who at 25 had been playing for 10 years in Halo tournaments and had yet to win a top prize. Oh, he had achieved second and third place finishes, but never first. Was this finally going to be the one to win?? This is in part why I wanted Allegiance to win, even though their backs were against the wall to CLG.

Heh, I need to add this here…During the tourney, we got to watch Walshy with his wide grin. At one point, the fellas I was watching the stream with decided to play a pseudo drinking game. Every time Walshy smiled, you took a drink. If he only grinned, you took a shot. Needless to say had we ACTUALLY been drinking, we would have all been drunk by the end of the tournament. Well, maybe next year. LOL 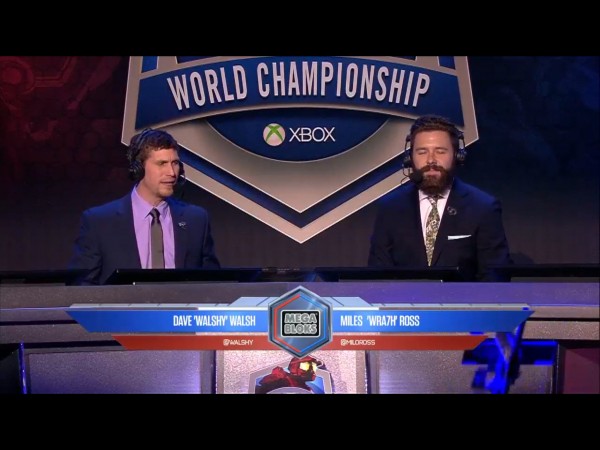 So this was it. The final series for this trophy, the rings, and the $1 million. 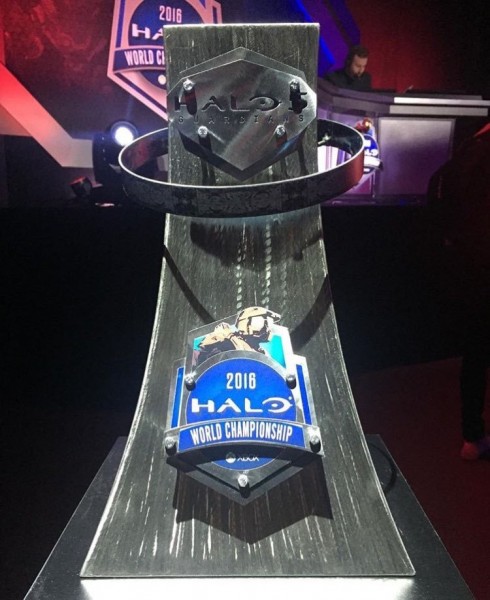 The series started off with Coliseum CTF. The game not so surprisingly ended in a TIE. So that meant game one had to be replayed… At this point, we all thought this was going to be an EPIC championship finals.

CLG came out swinging after that first game and took the replayed game, then the next two. Allegiance just wasn’t communicating as well as they had been earlier in the whole tournament and it showed. CXLG won the replay game of CTF 3-0. Then too Slayer on The Rig, 50-22 earning themselves a ‘steak dinner’ over Allegiance. Then in the third game, they really took it to Allegiance handedly winning Strongholds on Plaza 100-15. They just dominated that game and had all bases for a good bit of that match. 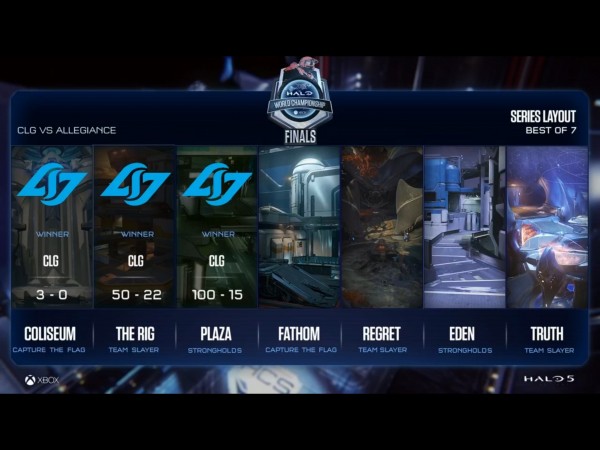 The tournament life and more importantly the championship and prizes were on the line for Allegiance. Would they be able to mount an epic comeback or would they be swept? Fathom on CTF was the next game. This map with this game type is known to be VERY fast paced.

Allegiance fought hard, but in the end, it was CLG with their stellar play and communication that would win not only game 4, but the Championship!

While I had hoped for an underdog to win, my (imaginary) money was on CLG to win.

And so it was. 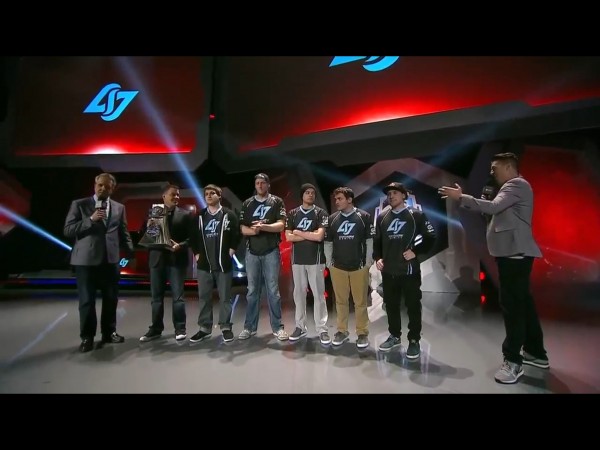 One thing I want to make note of here is that of the gameplay of Frosty. He wasn’t playing with sportsmanship. During matches he would consistently punch fallen enemies bodies. VERY unprofessional in my opinion. Just play the damn game..

Anyway, that wasn’t the last story of the tournament. There was one final matter to settle. Who was to be crowned the Finals MVP?

We the community got to vote via a twitter poll from among the final eight players who we thought was the MVP. That person would win this lovely! A life sized Mega Bloks Battle Rifle! (Man, I’m envious and jelly…LOL) 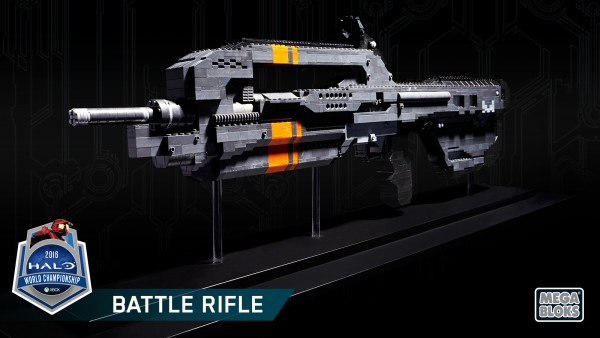 So who got it?

Why Naded of course. I think in part he got this due to his longevity on the pro Halo player scene, not to mention his team did place 2nd after all. I was happy with the community’s choice here. Not a first place, but that’s a ONE-OF-A-KIND. Yeah, it can’t compare with the difference of winning $500K to $1 million and taking a Grand Finale, but still it was an excellent nod to a great player. 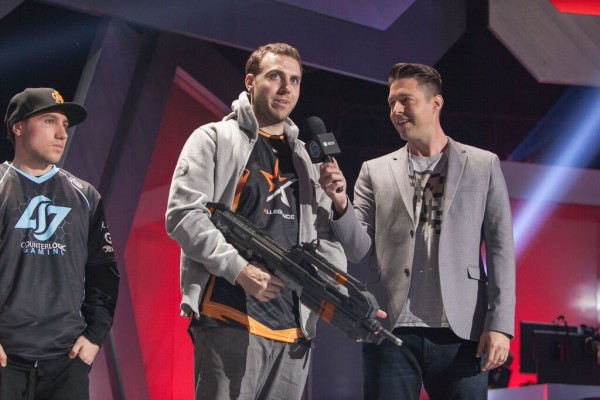 So there you have it folks. The LARGEST prize pool EVER for FPS console gaming was complete. CLG looks unstoppable for next year’s tournament. Will some other team be able to top them??

We will have to find out when HCS returns as the Halo Championship Series Pro League! 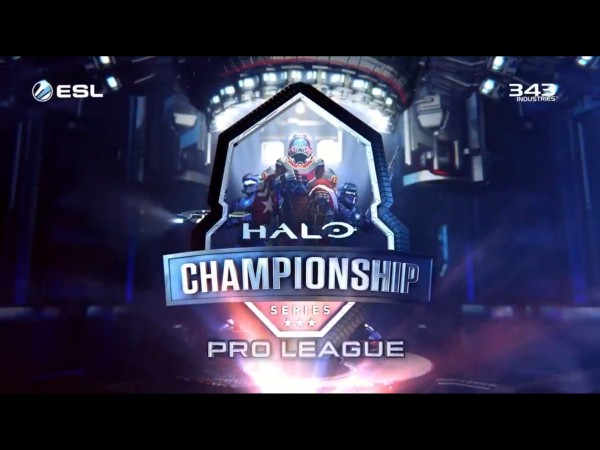