While there is no direct correlation just yet, we also observed that overall Splatter kills in Warzone have reduced 37.5%.

HFFL: Man, I am HAPPY about the changes to the Splaser! That is the last weapon I need for UNSC weapons commendations. In fact, it’s the last of all the weapons (not including the Spnkr Rockets) I need to complete for commendations.

In addition, teams across the studio are hard at work on a variety of updates, including many that come straight from feedback you’ve given us. Modes and playlists like Infection, matchmaking preference options, more Forge goodness, UI updates and post-game medals, Campaign balance updates (more on that in just a bit), and lots more that I can’t talk about just yet is in the works. Many of these will be landing with Memories of Reach, which is currently slated for an early May release.

If you’re reading this, you’ve likely already survived a few enemy onslaughts in Warzone Firefight. For those of you who haven’t yet jumped in, we’ve extended the Beta an extra day to thank you for your patience as we added more server capacity yesterday morning. On Thursday alone, you played 287,086 hours of Warzone Firefight, and we’re also learning things about the wayyou’re playing and where you’re succeeding (or not). For example, data has shown us that almost 50% of you who ran into the “Defend the Garage” objective in round 3 met defeat yesterday. The data on your experiences as well as your feedback will be crucial to the Warzone team as they continue to work on the full mode. Once you hop in and play, be sure to leave your feedback in the HFFL: I highly suggest posting in that thread folks if you want to see specific changes made to Firefight. Oh, and never mind those folks on Waypoint who might troll you, saying this like “that was already posted”. Just post as you want. It’s 343 that needs to read the replies, not the persons who like to troll…

As we announced last week, Infection is indeed on the way. Just like Warzone Firefight, you’ve politely asked that we build the game type for Halo 5, and the Multiplayer and Art teams (to name just a few) at the studio have been hard at work bringing it to life. Daily playtests ensure that the mode and maps are buttoned up for all out 12-player survival madness, and also that I get my fair share of shrieks and screams in for the day. We’re currently playtesting Infection on both Infected developer-made maps as well as community-created maps. Here’s an idea of what I mean: 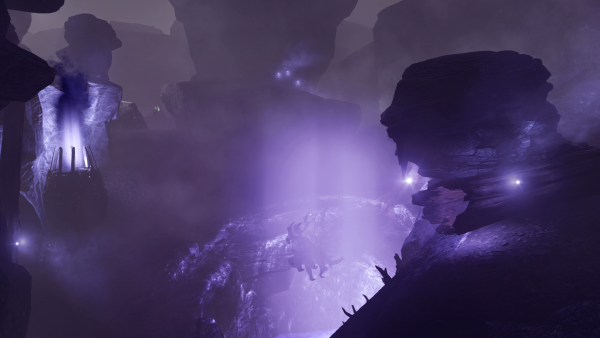 The Crypt – a custom-built Infection map from WyvernZu

On Monday of this week, I walked over to the Forge team and asked if they were working on anything cool, even though I totally knew they were. They sent this over, without comment, for today’s blog.

HFFL: Hmm, we can place skeletons now? COOL! And that whispy effect is awesome! I’m diggin’ that brick wall too!

Over the past few weeks, the Multiplayer team has been testing out refreshed Arena weapon layouts based on your feedback on Waypoint with the goal of updating these map variants in real-time based on continued input.

In this spirit, the team has already pushed an update to several of these maps earlier today, including the Coliseum, Fathom, and Empire variants. Here’s a quick list of the most recent updates:

These new versions appear on Empire CTF, Coliseum Assault, and Fathom Assault in Team Arena – once you play them, head into the HFFL: Huh, since Firefight came out, I haven’t stepped into Arena… That will change of course…for now.

Fiesta debuted in Halo 5 earlier this year, and we heard from many of you that you wanted to not only keep the party going all night long, but also into other game variants. Earlier today, we deployed an update that made Fiesta CTF, Fiesta Strongholds, and Fiesta Assault available in Custom Games, meaning you can fire up these game variants any time you’d like. Typically, these have been built into Custom Game options, but this would’ve taken quite a bit more time to deliver. So rather wait until those updates can be integrated, the Multiplayer team built some new variants that you can play right now, and I’ll go try to convince some people here to make Fiesta CTF a week-long social playlist one day. Be right back.

HFFL: YES! Fiesta PLEASE! Well, now that I think about it, since I’m nearly done with weapons commendations, I do not need it so much. However, I’m sure others do, so I’m still all for it!

Next up, let’s talk Campaign balance updates that are coming with the Memories of Reach update. To give you the details, I now toss it over to Chris Proctor.

Having had a few months to digest player feedback, reviews, let’s play videos and internal feedback, I’ve been working on an update to Halo 5’s campaign balance, aiming to address parts of the game that players yelled at us about, or that bugged me and the rest of the team enough to address even without external feedback.

Given that we’re constantly updating the game adding new content for Multiplayer, and we’ve got Warzone Firefight and other cool stuff on the way, I took the opportunity to touch global difficulty tuning and address areas where Halo 5’s difficulty was spiky, too easy or inconsistent.

I was pleasantly surprised to get the okay to make these sweeping changes, given how rarely videogame campaign difficulty tends to be updated after launch.

HFFL: Indeed! I can’t think of the last time I’ve seen a significant update to a campaign after launch.

Generally, this balance update smooths out the common spikes, increases the difficulty of mid-tier encounters, and makes certain enemies less frustrating or more satisfying to fight.

Thanks to the Test and Campaign teams for running through the campaign before and after the update to make sure nothing broke and give balance feedback. I’ve listed couple of specific changes below.

Please note that enemy-specific changes will also apply to Warzone AI – the Warzone team has been playtesting these adjustments, and we’ll be keeping a close eye on all feedback, (especially as it pertains to Warzone Firefight difficulty).

HFFL: Okay, many of these changes I agree with. But super combine from AIs? Oh gawd, please no…LOL.

For this week’s Community Spotlight, our very own Unyshek caught up with Forger Black Picture to talk about his new version of  Orion. Yes, you read correctly: Black Picture has boldly taken on the task of updating the map you may remember from the Halo 5 beta and launch period. Our multiplayer team is bringing the new version into our internal playtests, and we gotta say – the updated map looks awesome. Take it away, Uny.

Unyshek: Hey Black Picture! It’s a pleasure to have you here to talk about one of your recent Forge projects; updating Orion. We’re very excited to show off what you’ve done with the map and are looking forward to playtesting it within the studio. Before we get started, why did you choose to take this on as a Forge project?

Black Picture: Hey John! It’s good to be here! The reason why I decided to give Orion an update is because I’m looking to get into level design, and I thought it would be a great challenge to help improve the playability of the map. It would also help build my art skill set, something I taught myself while doing a co-Forge with Whos Blaze on a map called Goliath – which was a huge help in making this project easier to handle.

At first glance, it’s easy to note that you fundamentally changed most of the structures. Can you quick give us a quick rundown of these changes and why you made them?

The main reason why I changed most of the structures was for gameplay reasons. After asking multiple friends from Forgehub and Creative Force what their opinion of the map was, I picked up on three main issues with Orion: it was hard to traverse through, Blue base could be spawn trapped, and Red base was too powerful. Many of the changes I made seek to address these issues. Blue base was given a basement and more routes to traverse through. Red base had the stairs shifted over to change the line of sight for the Sniper looking towards blue tower. Cave was changed from a rocky platform to a cement platform to help with clambering into the cave where it used to be awkward to clamber. Those are just a few of the changes to help improve on the map. 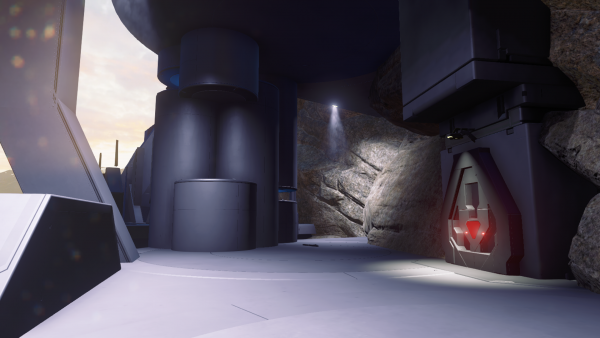 I also noticed that you chose to update the aesthetics of the map and give it a facelift. The Forerunner door that looks like it is straight out of the Silent Cartographer is one of my favorite additions. How difficult was it for you to change the look of the map while still making it easy for a player to distinguish where they are on the map?

It wasn’t too bad, but that was my main concern about this map was to not completely strip the identity of it. There were key points on the map I wanted to keep the same, while also improving on them. The rings in top center are the same, however they now float up and down. Over at Red base cage, I got a construction vibe theme ever since the beta. I also wanted to keep pride rock the same because it is a key visual part of the map. A lot of the visual changes were to help players decipher where they are on the map.

You also reverted some areas of the map back to how they were in the Halo 5 Multiplayer Beta. I’m looking at the ramp up from the Sniper Rifle area to Top Middle in particular. Did you bring this back because you felt it created better flow to the map?

Yep, it felt like top mid was very awkward to travel to and through. And it felt like the ramp along with making top mid bigger helped with the flow of top mid. Also the ramp helped break up line of sight from the cave to bottom mid.

After this, what is going to be your next Forge project?

Well, I’ll be taking a small break to take my wife on a trip to Japan for a bit, but once I get back I’m thinking about doing a updated version of Pegasus and then doing an original design with the Creative Force team.

Thanks for joining me today!

Hey thanks for having me!

HFFL: So folks, what do you think? Want to see Orion back in matchmaking? For me, the biggest complaint was the gawd awful lighting. That sun was WAY too bright and made targeting difficult. Hopefully THAT has been addressed to in this updated version.

PLAY OF THE WEEK

There is no question about this week’s Play of the Week. While we’ve seen many great clips, it’ll be tough to top Snip3down’s most recent acrobatics on Plaza.

That’ll do for this week, friends. I’ll leave you with a piece of concept art that I saw laying around earlier this week. 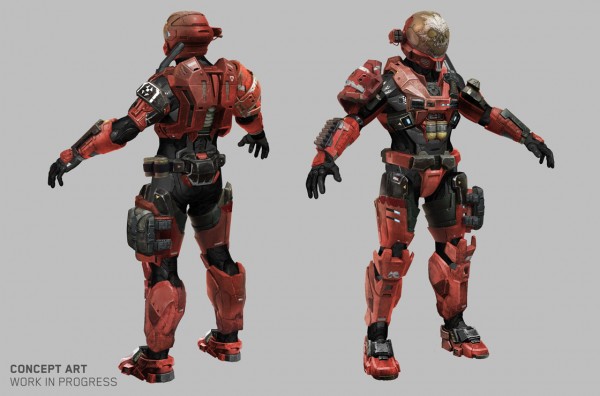 HFFL: Wow, that looks fantastic! Not exactly Emile from Reach, but VERY nice! Man, I can’t wait for the Reach armor! I’ve got a SPECIAL project in mind for this.