Hello, friends. We’re off to PAX East for the weekend, but stopping by with a quick blog this week. Across the studio, teams are hard at work on the Memories of Reach release, including updates to UI and matchmaking, new Forge goodness, sandbox balance, new armors and weapons, and more. Today, we’ll talk a bit about some new advanced controller options on the way, the new Super Fiesta social playlist, Waypoint File Browser, and other tidbits. Let’s get to it.

Anytime we put something out there for the community to experience for the first time, there’s always a sense of trepidation. Launching an experience as a beta only heightens that feeling. Now that we’re a few days out from the Warzone Firefight Beta, the first thing we’d like to say to the community is THANK YOU. Watching you answer the call to fight alongside your fellow Spartans against the myriad of enemies arrayed against you while completing your objectives has meant so much to everyone who has contributed to Warzone Firefight. Your feedback and the learnings from the data created by the thousands and thousands of hours of your effort are already going up on whiteboards and in Word docs around the studio as we begin to make plans to iterate, tweak and balance the Warzone Firefight experience as we drive towards the launch later this year. Your passion is what continues to drive our studio’s efforts each and every day.

HFFL: I still have yet to finish my write up on the Firefight Beta. To say the least though, it was awesome! I really enjoyed it!

Since Fiesta Slayer debuted in Halo 5, many of you have expressed an interest in being able to roll the dice with REQ variants in Arena. Enter: Super Fiesta. The brand new social playlist is now available in Halo 5, and will provide you with epic opportunities to clutch it with a variety of high-powered weaponry. To keep things interesting, the rarest REQs will also be a bit rarer in Super Fiesta.So when you wind up with that Prophets’ Bane, be sure to put it to use. And if you go down, you best hope there’s a teammate nearby to keep it warm. Super Fiesta will be available all week long, and we’ll see you in the playlist.

HFFL: I’ve played a few games of this. At present I have only got two REQ level weapons. They seem to be a bit more rare. Still, if you are looking to complete your weapons commendations without having to grind them out in Warzone and use your REQ cards, THIS is the way to do it! (I just finished my last weapons commendation yesterday-Spartan Laser)

The new Waypoint File Browser arrived, and it brings the ability to find and share your favorite maps, game modes, and even screenshots and game clips. You can also view trending game clips, map variants, and game variants, sorted by most bookmarked. If you’re looking for some new custom games to try out with a group of friends, jump onto the File Browser and send the bookmarks straight to your console, so that they’re waiting for you when you get home. Just like your friends.

As mentioned previously, the team also continues to build Halo 5’s in-game File Browser, and we’ll be sure to provide updates as we get closer to that release.

The sandbox team has been hard at work to seamlessly integrate more advanced controls options into Halo 5, and if you currently like your sensitivity setting, you need not read any further. However, if you’re curious about toying with some advanced control, do read on. Here’s David Pashute with more details.

The first thing you might notice here is that the two new settings do not appear to match numerically. Don’t be alarmed, there is nothing wrong and nothing has changed. Your current settings will be exactly the same as before the update, it just reflects the under-the-hood adjustments that we made to the ratios for Halo 5 in order to accommodate a number of factors, e.g. a reduction in aim assist and an increase in verticality.

One interesting thing to note is that if you do make these settings match numerically then you’ll have the look sensitivity ratio of previous Halo titles.

If you change the new settings to a ratio combination that does not match the defaults we created for launch, then the main look sensitivity setting will be displayed as ‘Custom’: 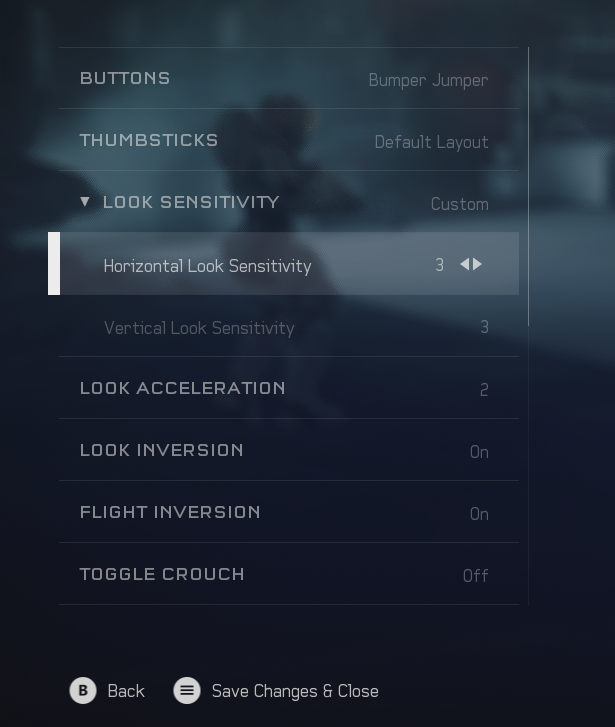 You can always get back to these default ratios by simply adjusting the main look sensitivity setting again. Changing that will automatically update the horizontal and vertical settings together.

HFFL: Hmm, I think I’ll be making a change to my setting then. Vertical always seems to be too slow for me, so I’m going to bump that up to 5 from 3. I’ll report back on what that is like for me, once the Reach DLC is added.

If you are reading this, you are most undoubtedly aware that Infection is on the way. To hold you over, here’s a few more in-progress screenshots of the Infection maps that are being playtested as we speak. Stay tuned for looks at more community-created Infection maps, too. 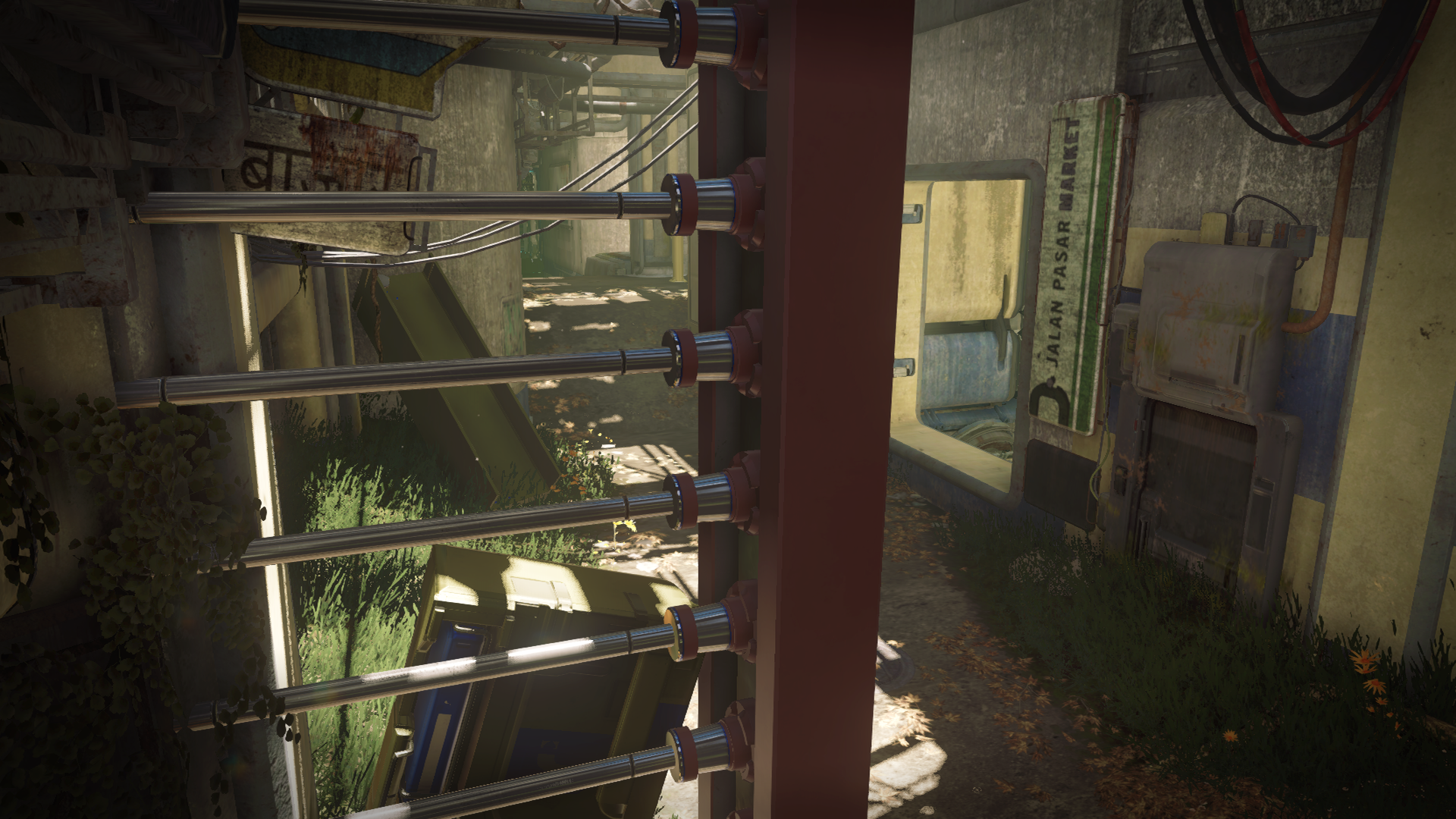 Malignant – an even further gone Overgrowth 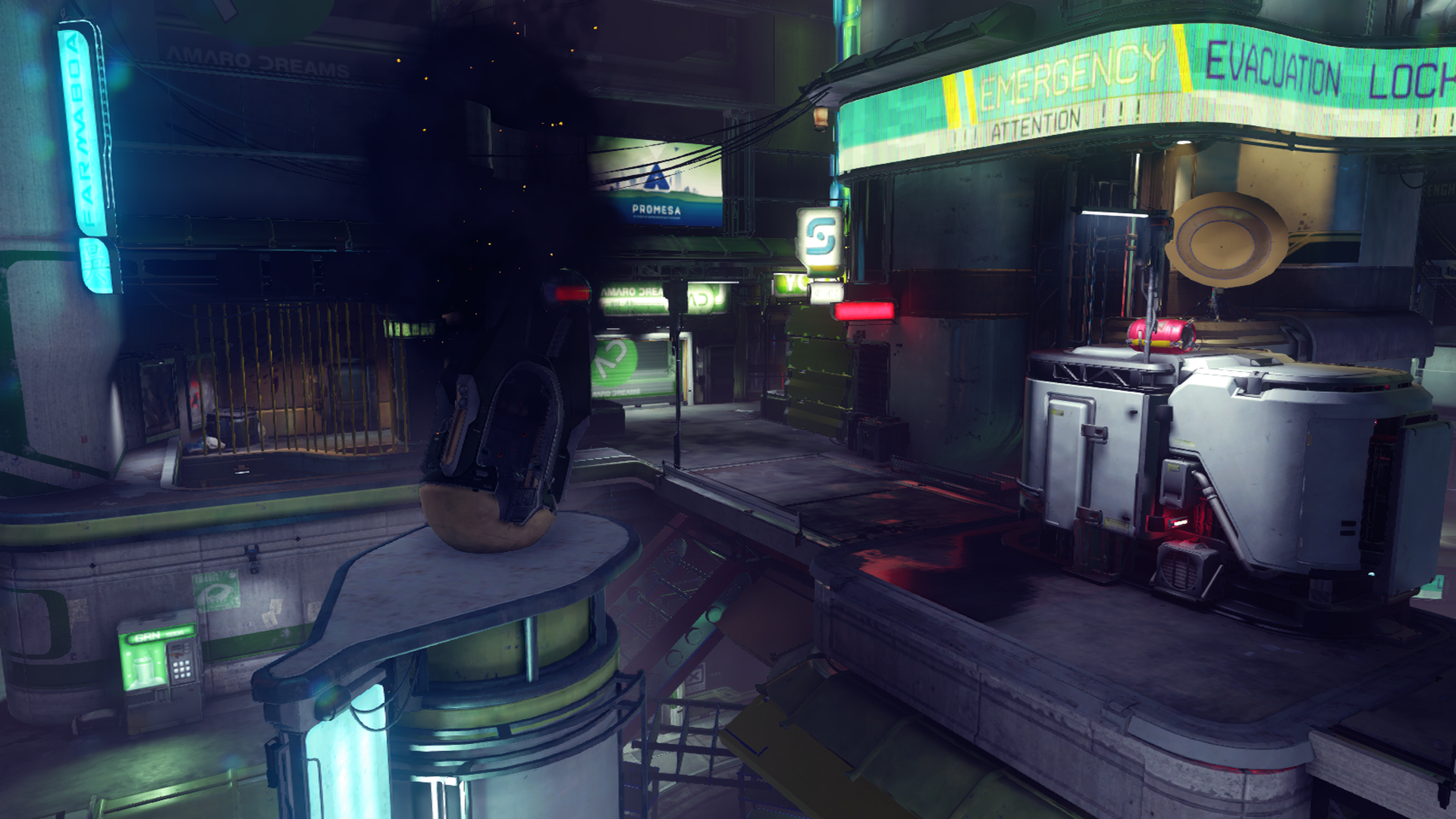 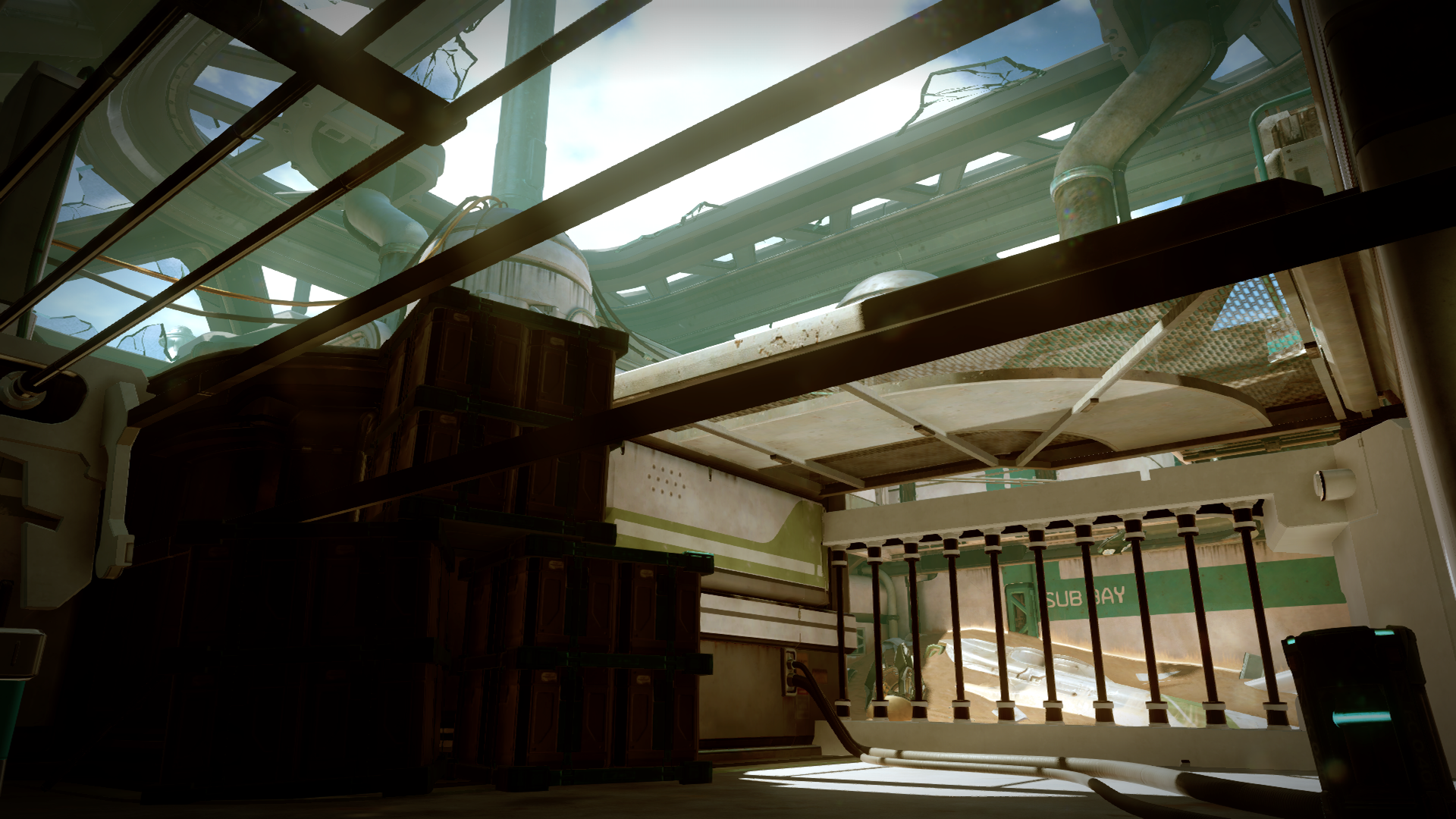 HFFL: I can’t wait for this to come out. More-so to see what the community has come up with. There are a LOT of good forgers out there who don’t get recognized. I plan on searching out Infection maps when they become available.

Over the past few weeks, the multiplayer team has been reviewing your feedback on Team Arena as it pertains to weapon layouts, game type lineup, and more. Today, we’ve pushed out an update to bring Team Arena map / game type layout closer to the HWC list of maps and game types, with a few exceptions – most notably a few Assault variants, as Team Arena is currently the only place to play the game type, and the fact that Assault (with some adjustments based on feedback from pro players, particularly in regards to spawning) is being discussed as a potential tournament game type in the future. This is the first step towards an updated Team Arena that mirrors the official tournament game type set.

Over the next few weeks, we’ll be working with top players on their feedback for updates to the overall map / game type layout and weapon layouts on said maps as we approach the summer season of the HCS Pro League. To ensure that enough time is given to determining the final map / game type combinations as well as the map layouts, we’re planning on rolling out updates in the following manner:

This timeline will give you an idea of what to expect for Team Arena over the next month, and we’ll continue to provide additional specific details about maps, game types, and weapon layouts as we continue to iterate based on input from pro players. As always, thank you for your feedback.

HFFL: Okay there…for those folks who are hoping for an HCS playlist, you will have it shortly. (I bring this up because I had a bit of a discussion with a fellow fan who was complaining about this on twitter.

That’ll do for this week, friends. Be sure to tune into this week’s Pro League Invitational at PAX East – after the four members of the 2nd place Team Allegiance parted ways, their invite into Pro League took a twist, and resulted in a 4-team qualification tournament, where only one victor will emerge. Which player has joined or assembled the best squad for Pro League? We’ll find out this Sunday, as only one team will be crowned champions and invited to Pro League. For more details, head here. The shows starts at 11:30 AM ET Sunday on Twitch.tv/Halo.

HFFL: Hmm, that’s interesting. Those players are lucky that 343 considered doing that for them. 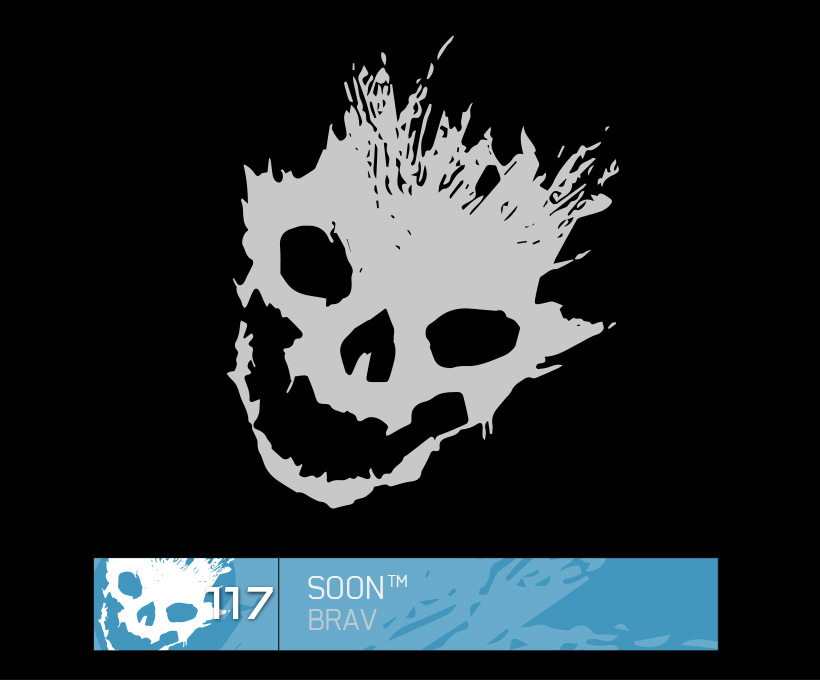 HFFL: Oh I WANT that emblem!!! 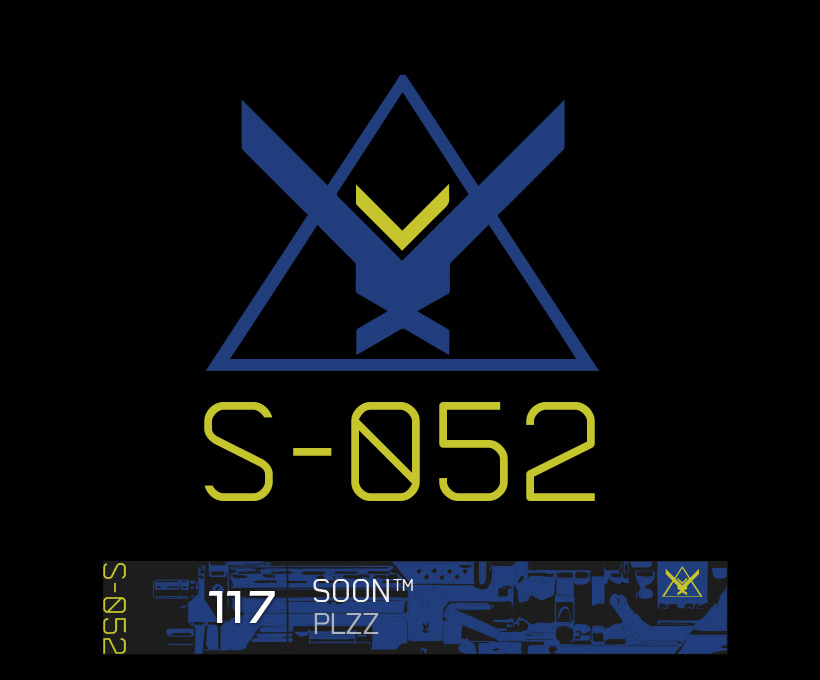 HFFL: Okay, quick trivia question, who is the Spartan referred to in the above emblem? He’s my favorite from Noble team.