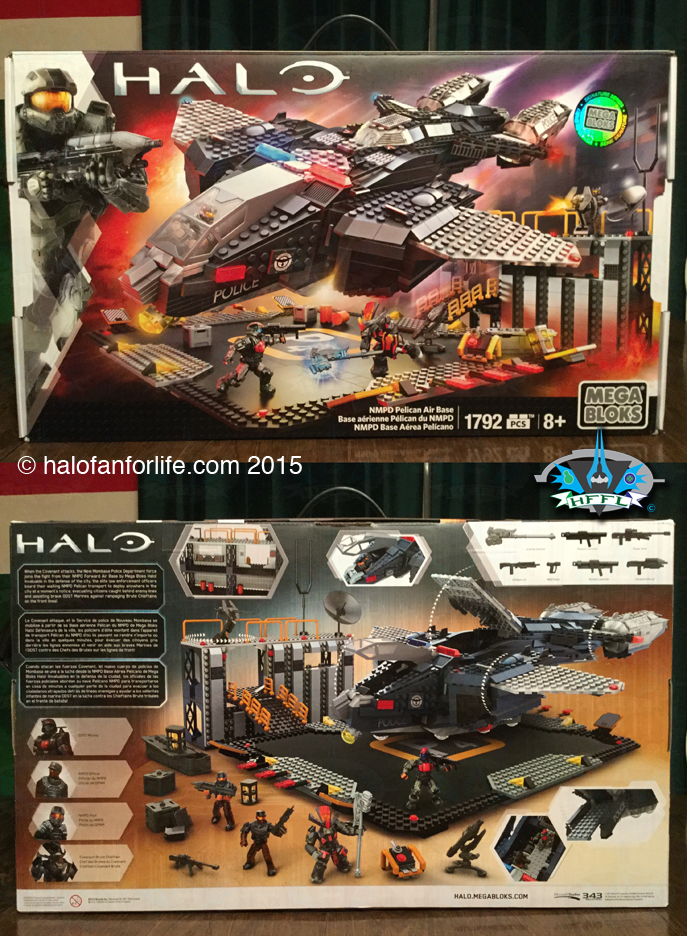 Okay, let’s get on with the Pelican  build! 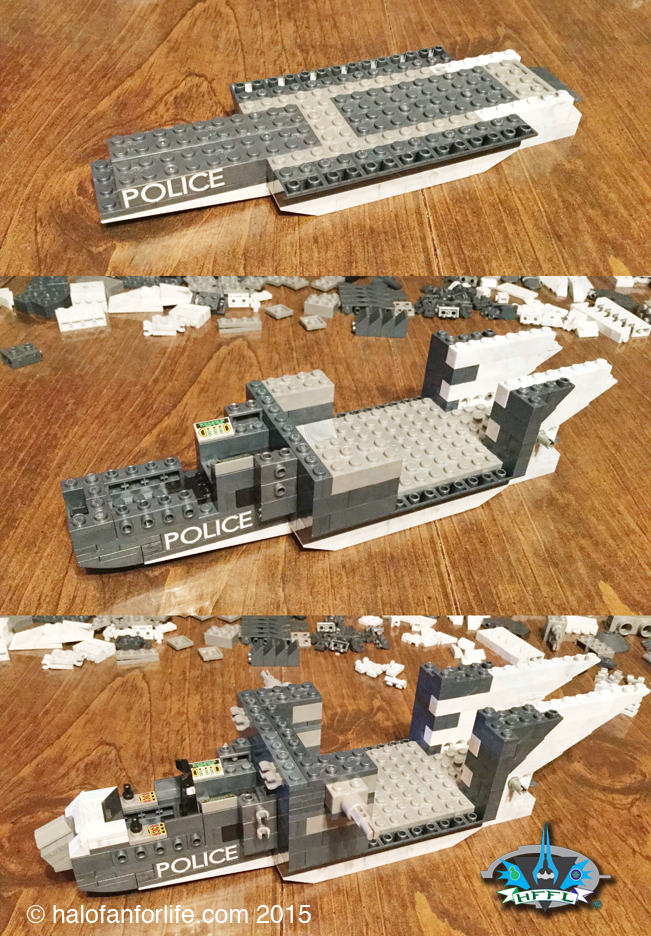 If you have either of the Pelicans that came before this, this build should seem familiar. It’s not exactly the same, but enough so that you will likely put this together fairly quickly. 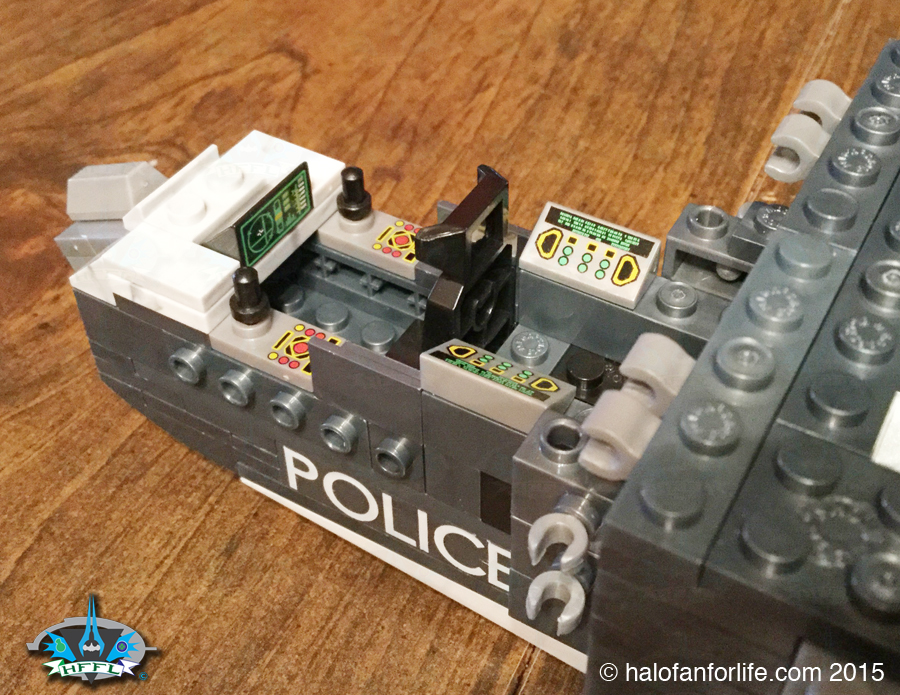 The cockpit section is chock full of printed pieces. 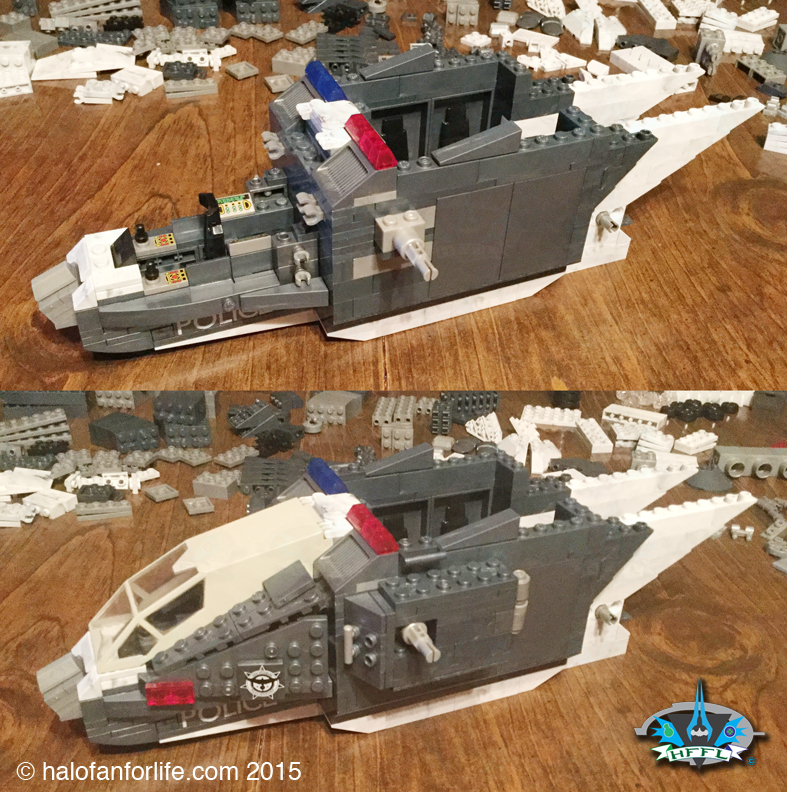 The bulk of the body is built. Note the posts coming out from the side. Those will be where the wings attach to later. If I have any complaint about this set, it’s the design of the pieces surrounding those posts. They came apart three times during my build which was a little frustrating. To say the least, when you play/display this, do not hold it by those sections. 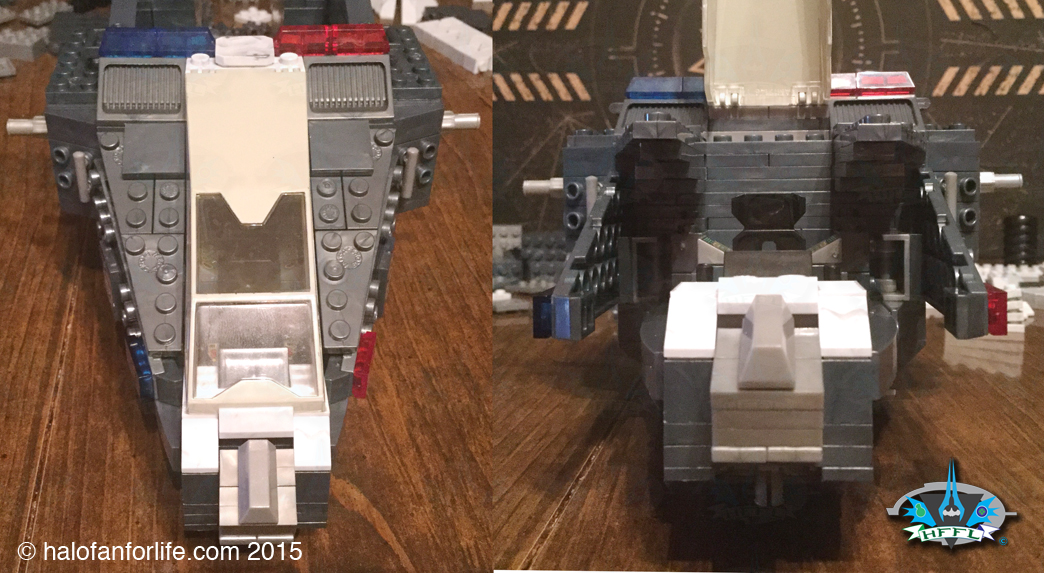 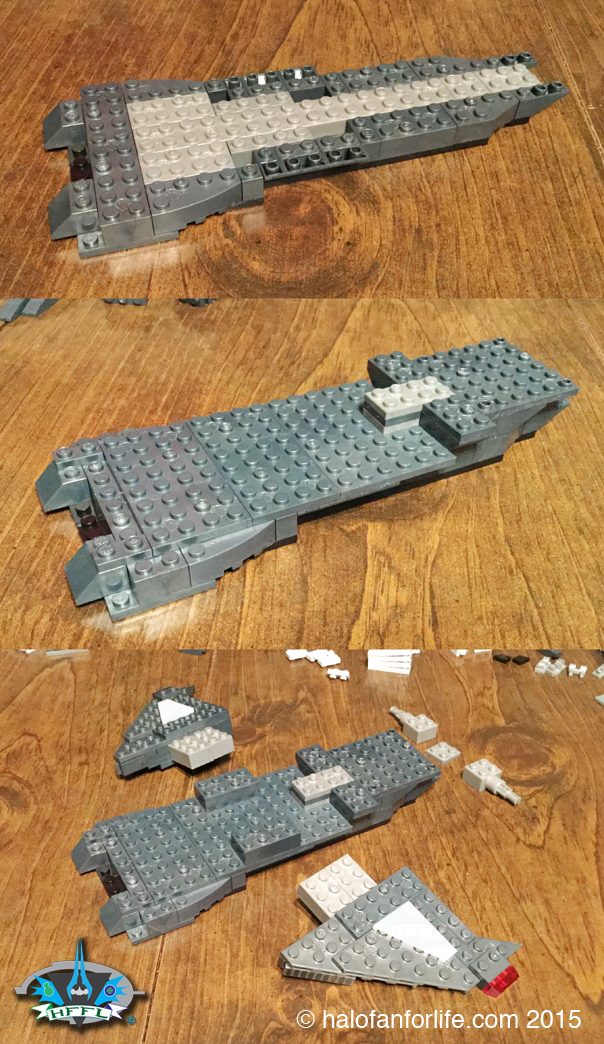 Steps of the tail come together. Pretty easy build here so far. 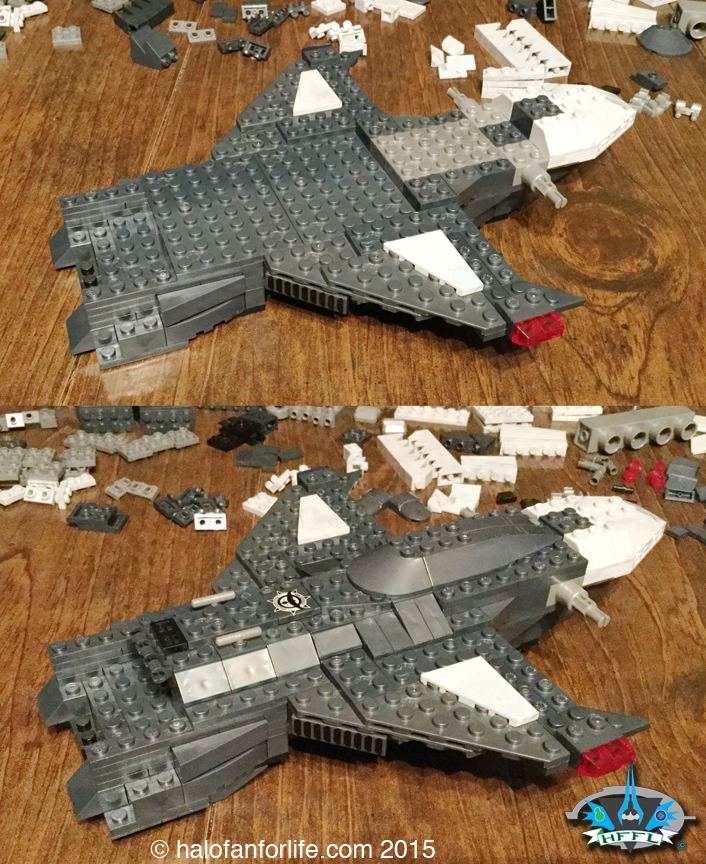 Most of the tail is complete here. Note the bottom portion of the graphic to the left, you can see hinge parts. Those are awaiting a top hatch to be added shortly. 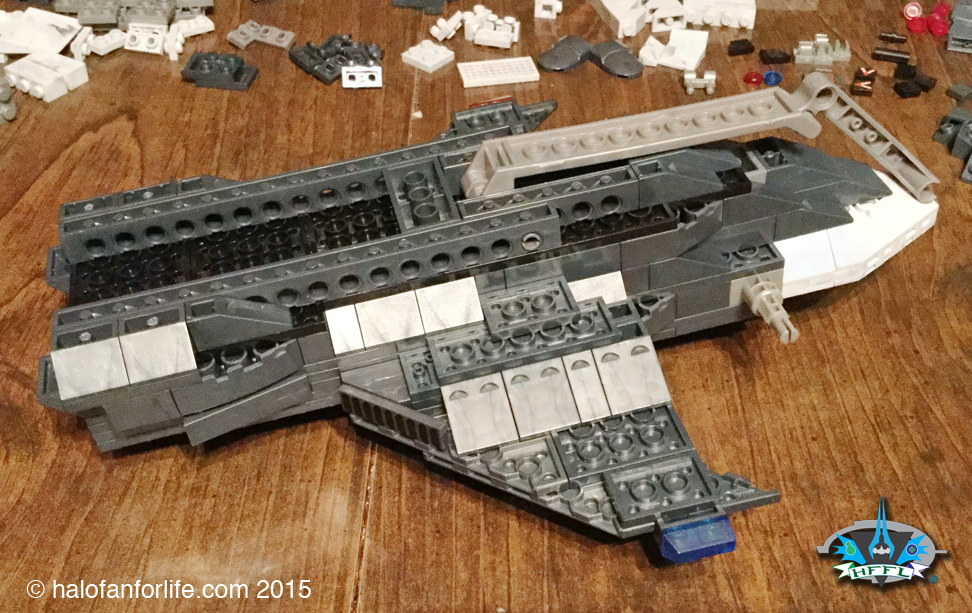 The underside of the tail. 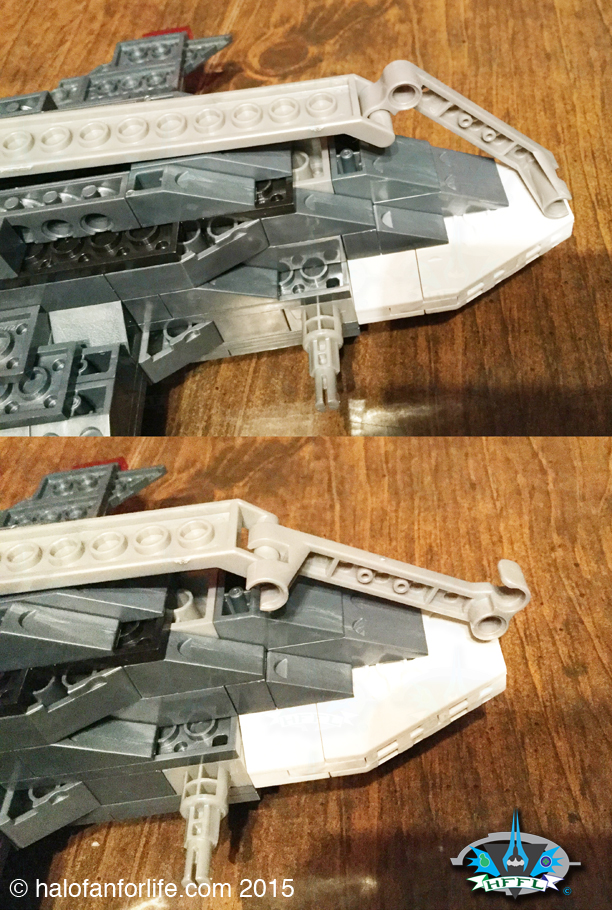 This crane like piece had me confounded. It didn’t seem to want to fit on properly. I called up Mega about this thinking my piece was defective and ordered another (along with the few missing parts I had). Turns out the piece was fine. I’ll speak more to this later. 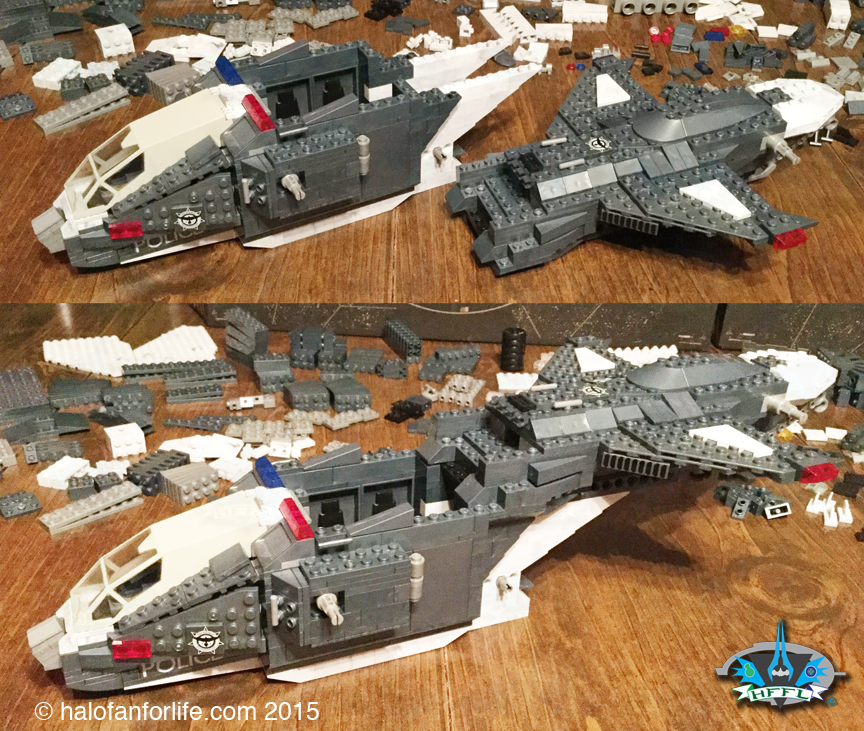 So here we are ready to put the body and tail together. I do URGE you to take your time here when pressing the sections together. Get a good firm grip on these. 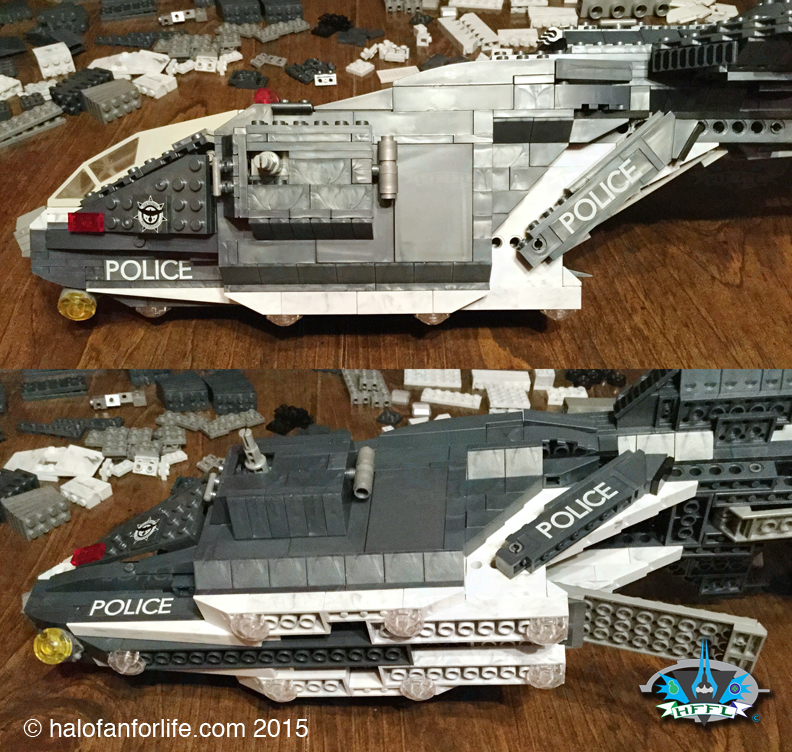 Above shows the rear hatch and landing ‘legs’. I do like that these were added. Great touch Mega! 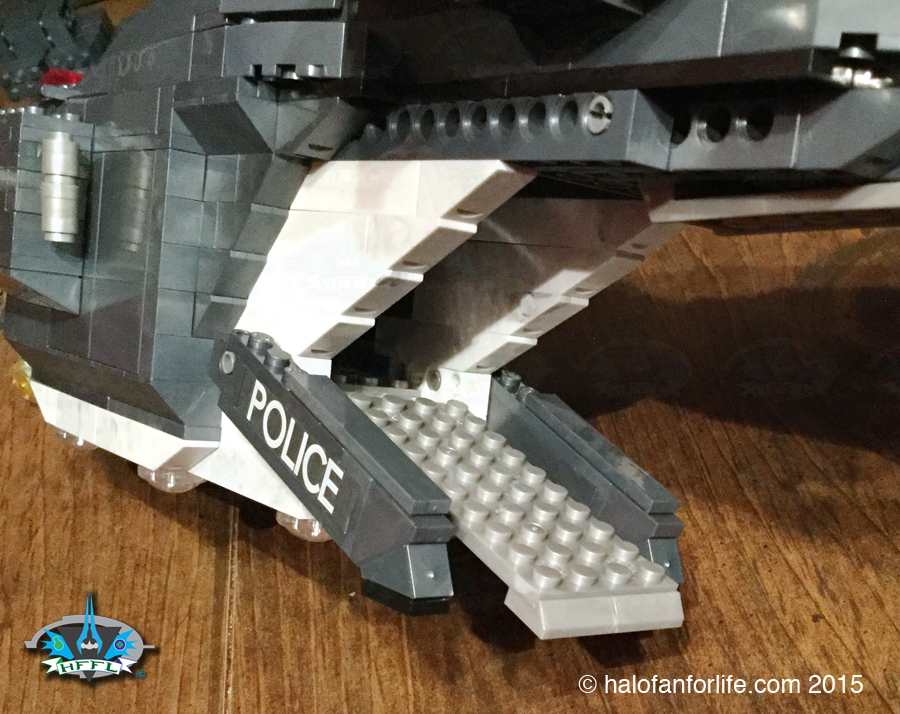 Another shot of the rear hatch. 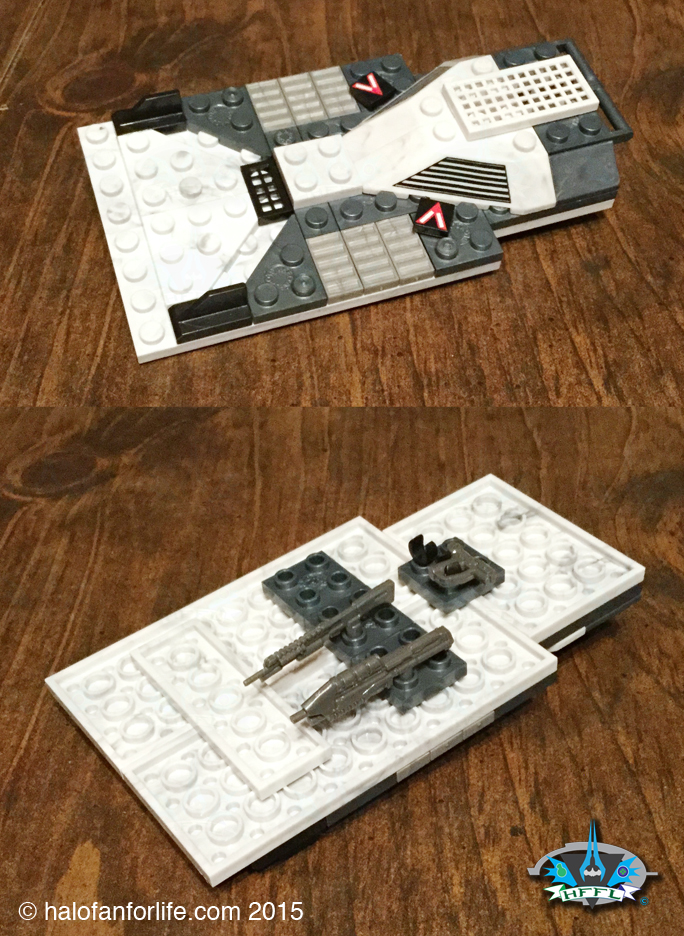 This is the top hatch I mentioned earlier. As you can see, you stow weapons on the underside of it, which are accessible to the figures from within. 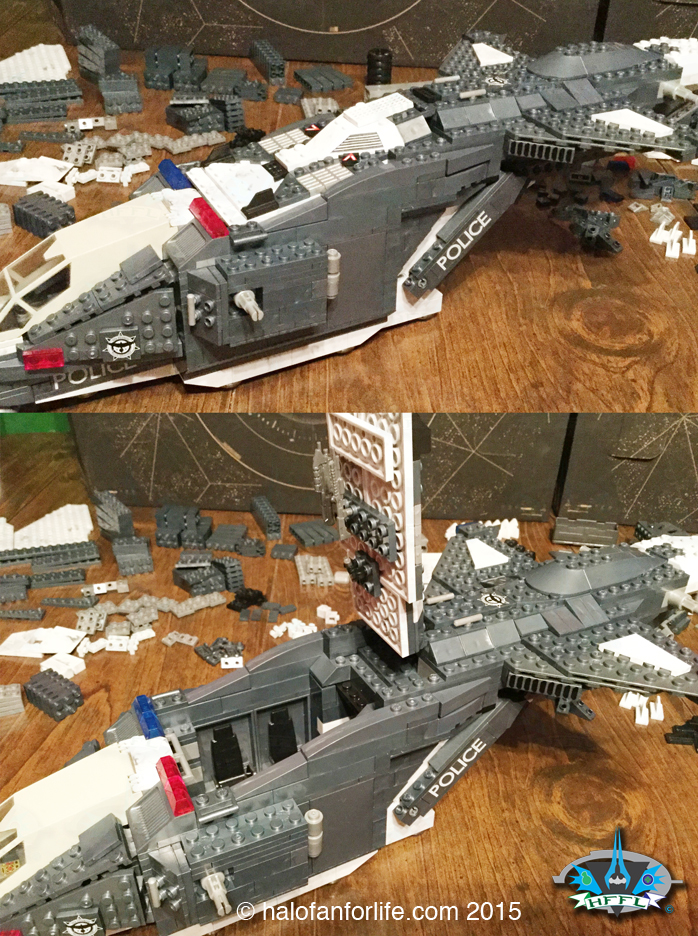 Showing the access via the top hatch. Excellent design here! 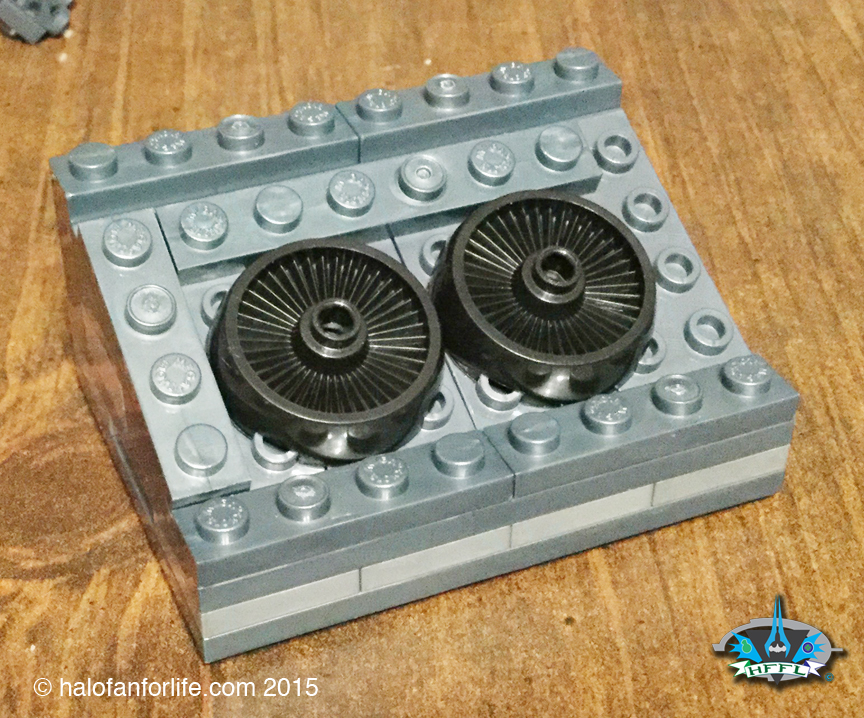 Heh, I thought this kind of looks like a DJ’s turntable set! 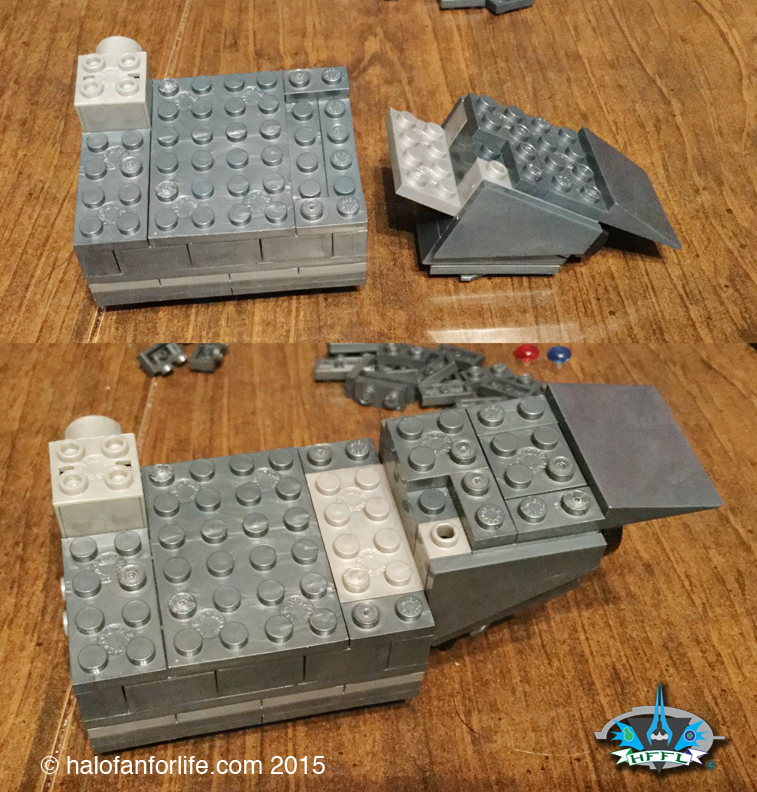 Okay, got to admit I made a mistake here. I had put different grey pieces in place where silver should have gone. It was easily remedied as I realized this a few steps later and went back to fix it. 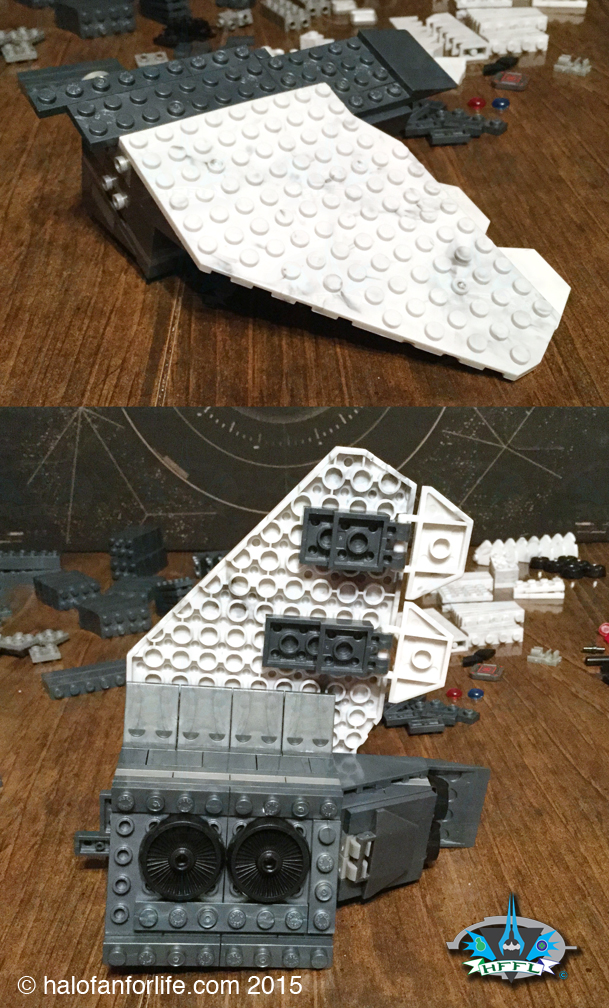 The wings and flaps are ready to be added to the Pelican! 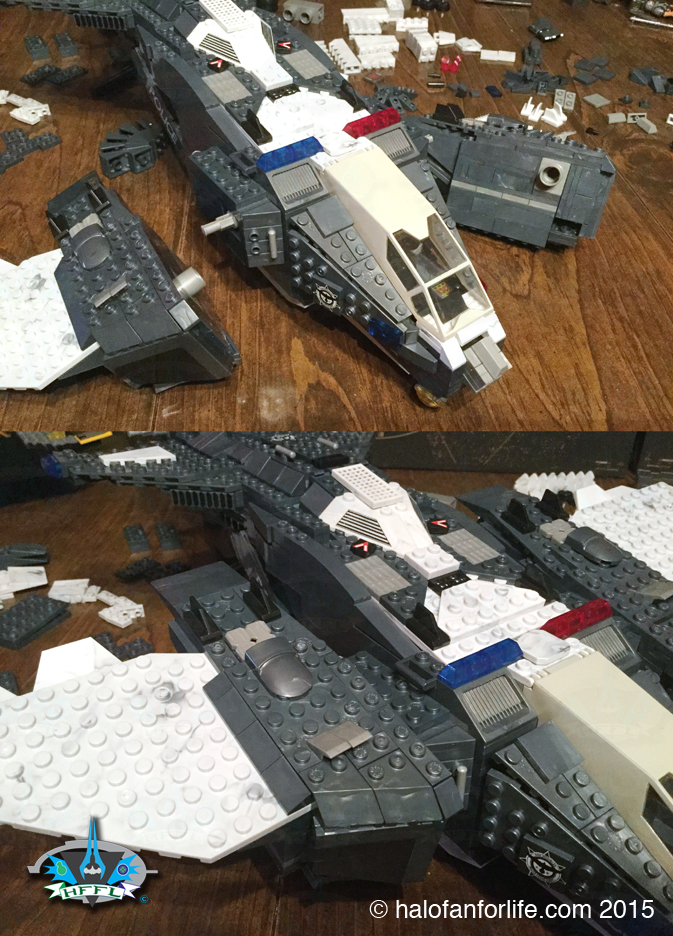 As you can see above, those posts noted earlier are inserted into the wing’s connection points.

Starting build on the engines, since I figured they would be the same, just reversed from each other, I built them congruently. 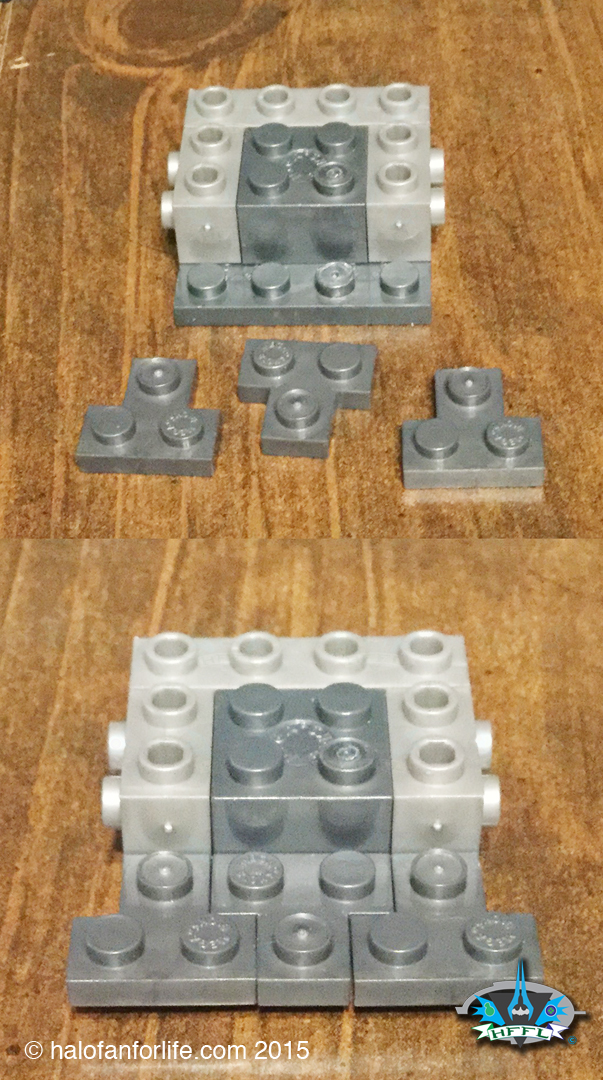 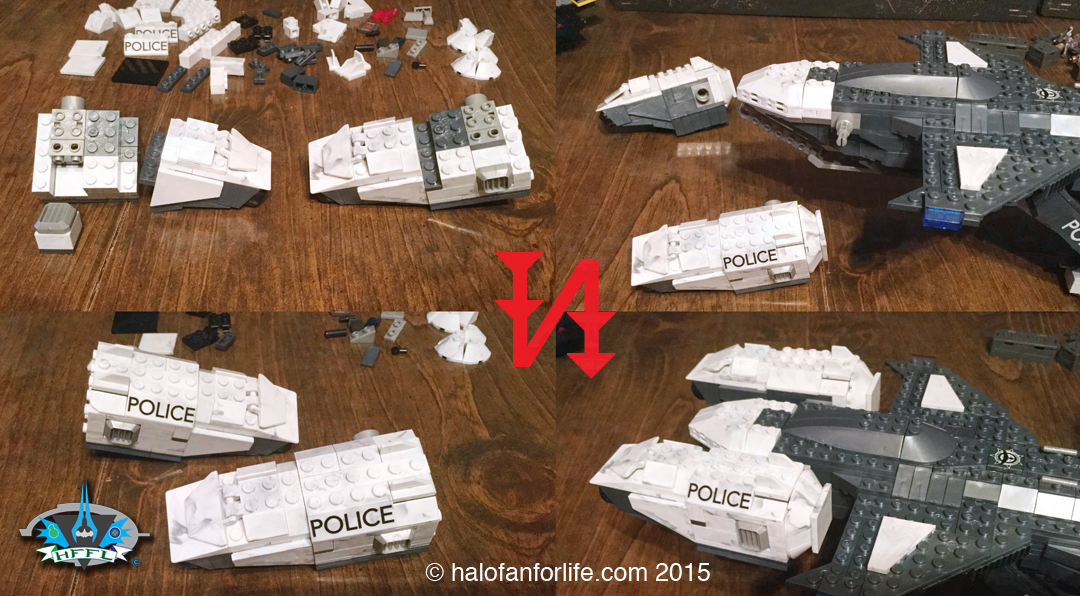 The engines are complete and ready to be added. One of my pieces here was slightly malformed. That was another I added to the list when I called Mega for replacement parts. 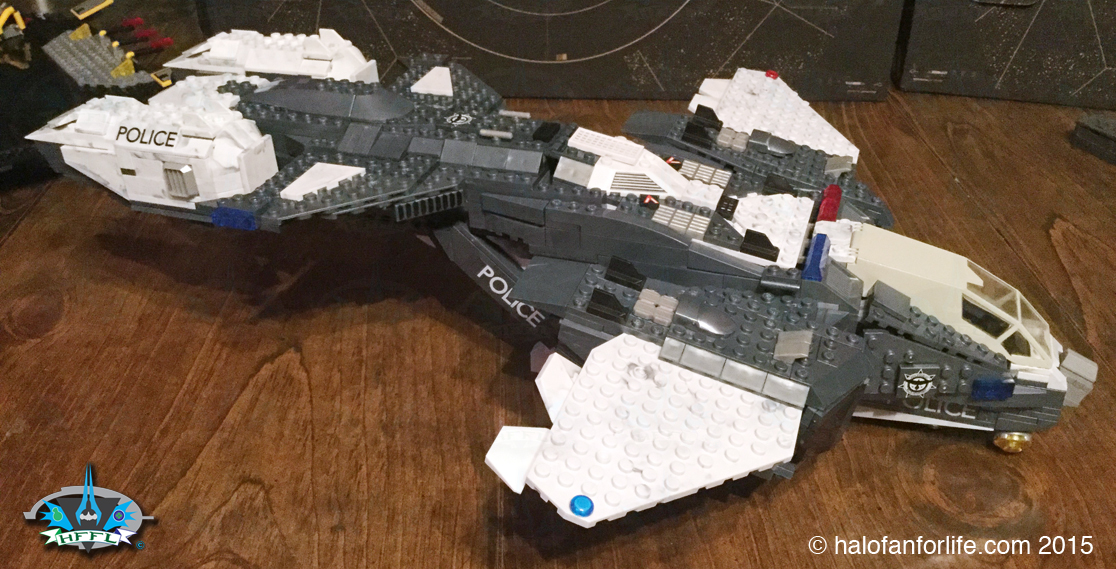 The Pelican is COMPLETE!

These were the parts I had left over. 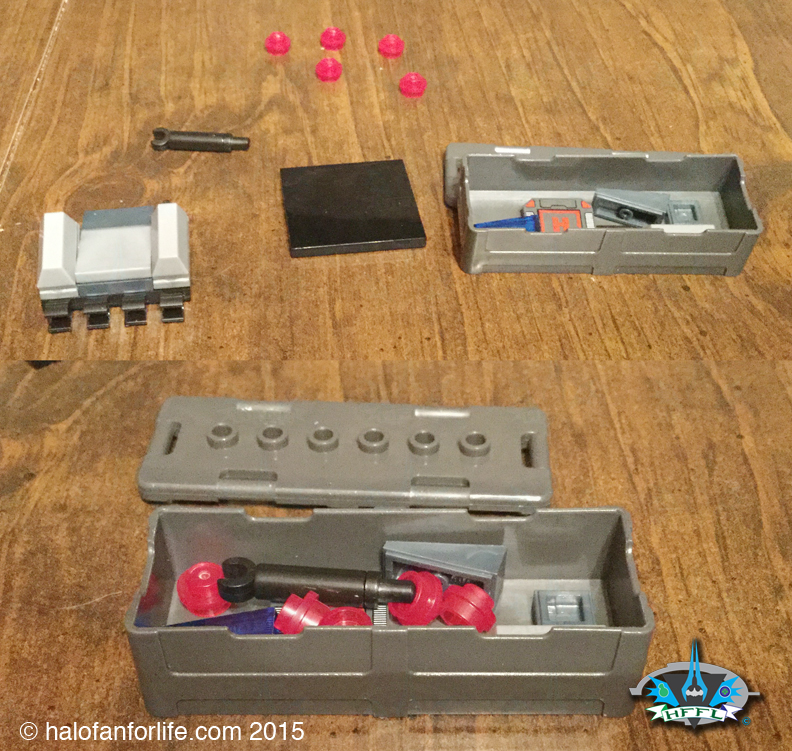 Not really a lot I could do with them, so I store most in the long crate that came with the set. 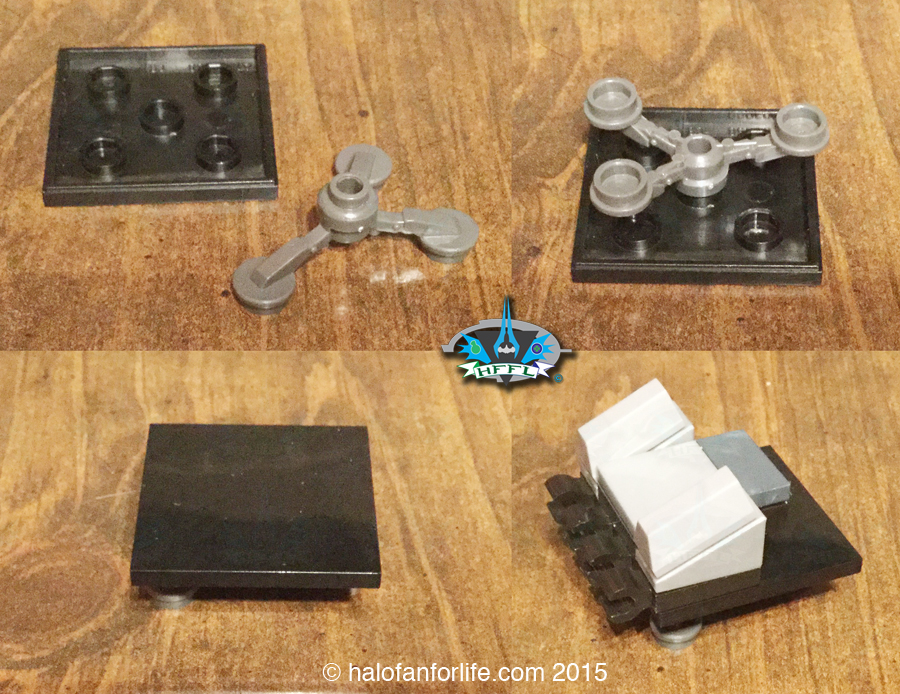 I made a sort of table with the other parts.

The NMPD Sergeant. This is just like the other NMPD Sergeants that come with other NMPD sets, though the color of the pants are different. This being brown, where other sets have it as blueish-grey.

The NMPD Pilot. Same description as the Sergeant above.Just the helmet and skin color are different.

The Brute Chieftain is FANTASTIC! I’ve been a fan of this figure since I got a prototype one back in 2012. The paint detail on this one makes it one of if not the BEST Chieftain we’ve got so far!

And finally for the figures, MICKEY! Yes! Fans have long wanted Mickey from Halo 3 ODST to join the ranks of named Halo Mega Bloks figures. You get him here! The only downside is for those that just want the figure. You either have to purchase the whole set or look to resellers for it. It’s going to ridiculous amount on eBay and elsewhere. I suggest just buying the whole set.

Above the orthogonal views of the Pelican. 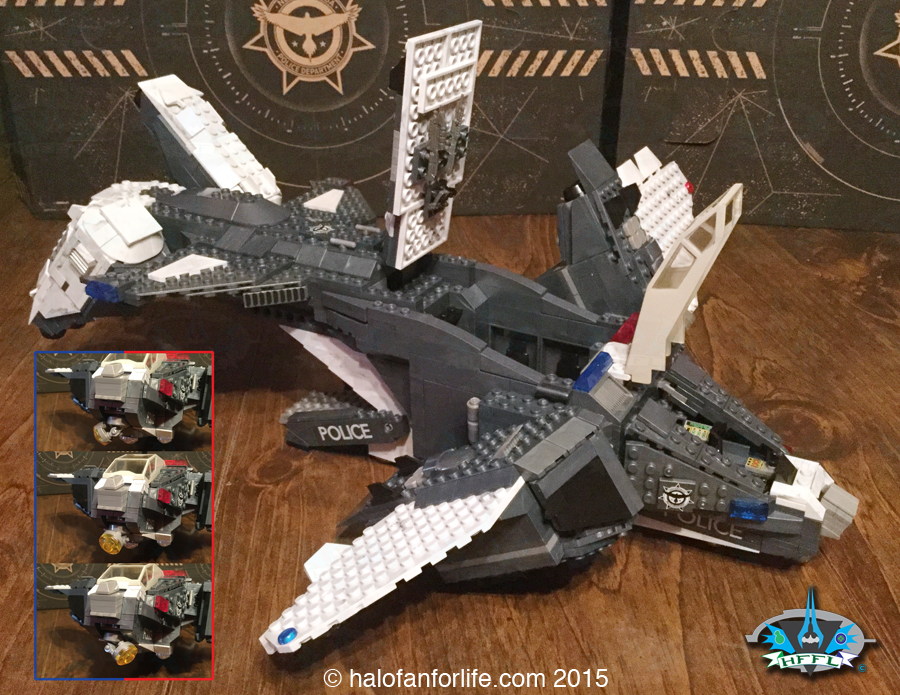 Finally, the Pelican itself showing all the moving parts. Inset pic shows the forward mounted assembly does turn.

This is a long build. I suggest splitting up the build into at least 2 if not three sessions of building. I built the base and platform one day, then the pelican the next. It made it much easier and it didn’t feel like I was trudging through the build at all that way.

Summary: You get a newly styled Pelican, a small base and a large platform with this set as well as 4 figures, one being a named character. Fairly easy build, though take care with the body/tail sections when putting the together.

Why did I give it a 9.0 out of 10?
• This was SO hard to not give a 10 for it. The reason I didn’t give it a 10 is in part due to price. While the price per piece ratio of 10 cents per pieces (as a general guideline) is met and even better, I’m curious if people would want the platform and base with this set? Yes, it helps to flesh out the scene, but it also means a lot more shelf space to display it.
• The other reason is, is this really a signature set? Honestly, while the Pelican is my favorite ship from Halo, the NMPD version isn’t so iconic. So I wasn’t sure it warranted the status of being a signature set. This was reflected much in opinion by fellow fans on several Mega Bloks Facebook fan pages.

Value: As mentioned above, the price per piece ratio meets and even exceeds (to the good) the 10 cents per pieces (US) guideline) You’re getting a fantastic ship, platform and base, not to mention a named figure and an awesome Brute Chieftain. Is it worth $150? Well..here’s the thing. Previous Pelicans have been far less. The original one, IIRC, was around $70, the electronic one that came after was $100. So in essence, you’re paying $50 more then for the base and platform. Is that worth it? For the piece count, YES. For display purposes? YES.

I was fortunate enough to get this on sale for half price and certainly for $75, this was TOTALLY worth it. I do NOT see this set coming down much in value. Yes, Toys R’ Us may look to put this on sale. SO get it then if you don’t already have it. But don’t wait too long thereafter. I suspect this is going to be a sought after set a time from now.

Do I recommend it?  Yes! Absolutely. Of course, I’m partial to the Pelican. Even then, the set is great, the figures are cool, and I really enjoy having a platform to put the Pelican on. This set is it’s own diorama!