Greetings, fiction-followers, and thanks for tuning in for another edition of your favorite Halo story corner. Last time we met, we recapped the story of the original Halo Wars for, you know, no good reason at all. And this week has been pretty quiet on all fronts, really. Not a whole lot going on, not a bunch to talk about. I mean, other than E3, Halo Wars 2, and Warzone Firefight fiction. But other than that, nothing. Promise.

Okay I lied. So this week, the Halo heavy hitting came from the hallowed halls of the 2016 Xbox E3 presence, and the initial salvo was provided in unsurprisingly spectacular fashion with a new cinematic trailer courtesy of our friends and partners at Blur Studio. If you haven’t seen it yet, watch it right meow. If you have already seen it, you know you want to watch it again. I’ll wait, promise. In fact, I’m probably watching it again myself right this very moment. We’re one and the same, you and I.

After you are done with that, check out this sweet behind-the-scenes featurette you see here that gives fans an inside look at what it takes to bring the Halo universe to life in such vivid and glorious ways. I know that avid readers of this feature have already started picking out little lore-laden hints at what might be in store for players when Halo Wars 2 drops on Feb 21 of 2017.

All throughout the week, we provided you with various looks at the upcoming real-time strategy title from different angles with different flavors. Looking to see what players from around the world are currently dominating the tore.xbox.com/en-US/Xbox-One/Games/Halo-Wars-2-Open-Beta/e78a873e-1ade-48da-9d66-6474751895c1″>Halo Wars 2 Multiplayer Beta leaderboard? Of course you are. Curious about the crazy and often-unpredictable nature of testing new games and features? Check out our own Dan Ayoub’s community communique.

Now, story fans in particular all have a million questions running around in their heads (and on their forums) right now… Who are the Banished? What’s up with Atriox? What happened to that Flood infection form from Halo: Escalation? HOW DID DEY GET TO TEH ARK?! These and many more questions will be answered in the future; some sooner than others. We know, we know, you want to learn ALL THE THINGS. And you will eventually, just not all of it today. Don’t fret, however! I did manage to grab a few moments with Jeremy Cook and Kevin Grace, 343 Industries’ fearless leaders for Halo Wars 2 art and story, respectively. I figure you might be interested in what they have to say. Let’s continue, shall we? 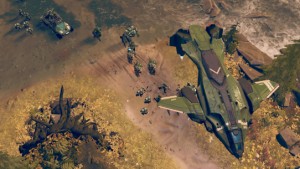 GRIM: So Jeremy, what was the overall thought process on the art direction for Halo Wars 2?

JEREMY COOK: I’d say that overall, we set out to try and strike a healthy balance between familiar and totally new. With the challenges the RTS genre can produce in regards to camera angles and perspective, readability and clarity of the units and combat space is typically the highest priority. And of course, we also wanted to maintain the visually rich and immersive qualities expected in a Halo title, regardless of genre. We put a lot of effort into preserving recognizable traits and personalities of (beloved) units and structures while working to maintain their readability.

GRIM: In part because of those camera angles you mentioned earlier, the environments themselves can actually play a pretty crucial role in the overall feel of an RTS game, right?

JC: Definitely, in Halo Wars 2, our environments needed to provide another hallmark of Halo: a grand sense of scale. Using our camera’s perspective, we leveraged the negative spaces, glimpsing into endless chasms of Forerunner technology and creating a greater sense of depth within the frame.

GRIM: While I’d say that many halo fans have already noticed some care and attention paid to the “familiar,” but can you also speak to the nature of forging some new ground with the Banished palette and architecture?

JC: The Banished were a great opportunity to showcase a more Brute-centric aesthetic, though at the same time, we also wanted to make visual nods to their Covenant past with key, familiar equipment used as a foundation. Layered armor plating, ramming spikes and overclocked plasma weapons punctuate a nomadic, Brute faction with scarred past and uncertain future. From a gameplay perspective, the Banished also provide a nice visual contrast to our more familiar UNSC which sport a roll caged, modular look as they bring everything in by Pelican.

GRIM: Awesome. Now, while I could sit and talk alien aesthetics with you all day, I see that Kevin is trying to get away before I corner him for shreds of sharable story details. Before I have to tackle him, any final thoughts you want to share?

JC: Overall, we wanted to create a vibrant and visually beautiful game with both epic, large scale reads, as well as a great sense of detail in the quiet areas. Plus, we get to showcase a new battlefield and expand on the Halo visual pallet from a different combat and camera perspective. I’m proud of all the hard work that’s been put in so far, and hope the fans enjoy what we’ve ‘done with the place’. 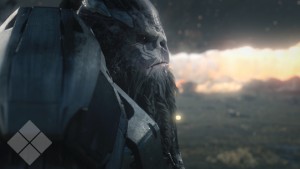 GRIM: Oh I imagine that the more they continue to see, the more they will definitely find more to love. Now, Kevin, can you please talk a little bit about the setting for Halo Wars 2? Where does it pick up from the original game, and what returning heroes might we see?

KEVIN GRACE:  It’s so great to finally get back to Captain Cutter and the Spirit of Fire! Those who remember the ending of the first Halo Wars will recall that the Spirit of Fire and everyone on board was floating through space with basically no engine and no real chance to get home. We’re picking back up with them 28 years later as Captain Cutter, Professor Anders, and the rest of the crew find themselves above a HUGE alien installation we all know as The Ark (mainly because the Master Chief went there and gently engaged in some… redecorating in Halo 3).

GRIM: So, what about this new threat will they be facing?KG: I’m not going to say much right now, but as Cutter and Anders (and some new friends we’ll talk about later) get caught up about the Ark and about everything that’s happened while they were lost in space, they also meet their new opponent: The Banished. These guys are mean, grizzled veterans who are used to fighting both humanity and the Covenant, and they’re led by a Jiralhanae named Atriox – a tactical genius and physical powerhouse. Atriox really is in many ways the personification of the chaos currently gripping the Halo universe, and his ruthless pursuit of power puts Captain Cutter and his crew once more in a position where they have to fight for their lives – and likely those of many others.

GRIM: Alright, I know we’re going to be talking more about these types of things later on, so I’ll let you off the hook… for now. Thanks much for lending us a few words!

READY FOR THE PREQUEL 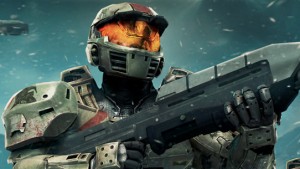 FIREFIGHT FICTIONOf course, while Halo Wars 2 is penciled in for early 2017, fans still have plenty to keep them occupied while they wait. Halo 5: Guardians is still going strong, and the upcoming Warzone Firefight content update will be the title’s biggest yet, filled with all sorts of delightful doo-dads and destinations that will tickle the fancy of the canonically-curious. Let’s take a look at some of what’s in store, but keep your eyes peeled – we’ve still got more to come soon. 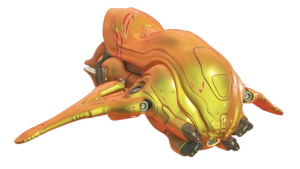 Whether wielding vicious ‘sKelln hunting beasts or dueling in piston-driven warbirds, the sky-chevaliers were the undisputed masters of the Sanghelios sky for long ages. Though their order’s honor was dulled under the Prophets’ rigid strictures it was never tarnished, and as the Zealot and Ascetic temples once again bustle with life and newly-mended banners fly above reforged battlements the sky-chevaliers unfurl their wings to defend the faithful and punish the wicked. Their chariots are anointed Banshees, built to the finest tolerances by artisan-armorers of unsurpassed skill and piety. Beautiful works of art in their own right, these vehicles combine ancient tradition and ultra-tech advances; delicate grav impellors are wrapped in prayer strips and golden nanolaminate skins hand-carved and polished to a brilliant sheen by hopeful initiates learning secrets of the aerial hunt.

Helmet:  Special containment teams respond to a wide range of hazardous biological containment, mitigation, and eradication issues at UNSC facilities. For this reason, the CINDER helmet features a full suite of lab-grade chemsniffers and hazmat filters. 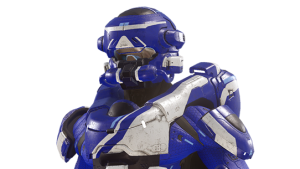 Armor: The CYCLOPS can parasitically connect to both UEG and Covenant urban infrastructure networks, levering their hardware and databases to augment its own network of emplaced sensors, drones, and tacnet links.

HFFL: That is one FUGLY helmet, IMO. I won’t be wearing the Cyclops helmet, ever. 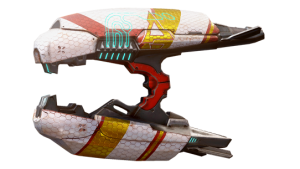 The Jiralhanae warlords who control marauding Brute fleets and thrall colonies have the resources available to procure the services of expert weaponsmiths from across known space.

Built with secrets that only the most cunning Jiralhanae can unlock, Plasma Rifle variants like the Sorrow of Teash and the Scale of Soirapt are the first glimmers of an approaching renaissance for the species. A spark of change that will see their innate ferocity paired with a more calculated approach to elevation and transcendence.

Baroque stone ruins lie atop an advanced complex dating to the earliest period of Sangheili interstellar expansion. The San’Shyuum Prophets and their Ministries ruled Sanghelios for millennia, but the fortunes of the Sangheili waxed and waned long before the Covenant’s formation. In an age now forgotten this remote sanctum was a lush garden and the home of towers of glass and steel used to launch the first Sangheili interplanetary probes. But when the planet’s climate shifted and the secrets of antigravity were discovered the towers fell into disuse and eventually eroded away, forgotten in the rush to the stars. The War of Beginnings came and went before the shadow of buildings once again fell across this land, as warrior ascetics seeking a return to ancient traditions built their homes and houses of knowledge and training in what was then a desert. Now, as if a cycle was turning, their fallen temples and cloisters lie crumbling in the hot winds, and strange new structures plant themselves on the bones of the old as life blooms in the hills.

And with that tantalizing tidbit, we draw a very busy week to a close.Until next time… Live well, play Halo, and don’t send air units to pick up supplies.-GRIMP.S. Wishing a very Happy Father’s Day this weekend to all the dedicated Halo-loving dads and father figures out there – especially to my very own Grim Prime. <3

FEATURED UNIVERSE ARTICLE THIS WEEK!
THE ARK
The Ark was the massive installation used to create and deploy the Halo Array, a series of ringworlds created for the purpose of destroying the Flood.