Okay, first things first, in case you have seen the full REQ reveal sheet, here it is:

Now let’s briefly discuss the offerings of this month’s update, shall we?

WE’ve known for a bit that we were getting upgraded Bosses for Firefight, since the demo took place. That crazy cool super grunt in the middle is the Grunt Goblin. It’s a mech that only Grunts pilot. I’ve taken to calling it the ‘Gruntbuster‘! I think that has a better ring to it. Don’t you?

Next the game modes. Obviously we are (or at least I am) VERY excited for Firefight. We haven’t had this since Reach. It was missed in Halo 4. SO I’m very happy for it’s return. For those of us who replay the campaign (me included), we are finally getting score attack. This will include new achievements and the chance to challenge your friends as to can get the best score!

As I reported yesterday, the new Warzone map is called “Attack on Sanctum“. This takes place on the Elite homeward of Sanghelios. I have a feeling this is going to be many people’s favorite Warzone map. Next is the new Warzone Assault Map “Prospect“. While this takes place on Meridian, just as “Skirmish at Darkstar” does, this is NOT a smaller version of that map. Rather, it’s a whole NEW map, taking place elsewhere on Meridian. From what little bit I’ve seen of it, this too could become a favorite. And finally, ‘Molten“. This new map is for Arena Multiplayer. Danger exists on the map as there are places where  one wrong step and your spartan could fall into molten liquid. Not a good way to go at all.

There is SO much more coming to Forge than just this new map. 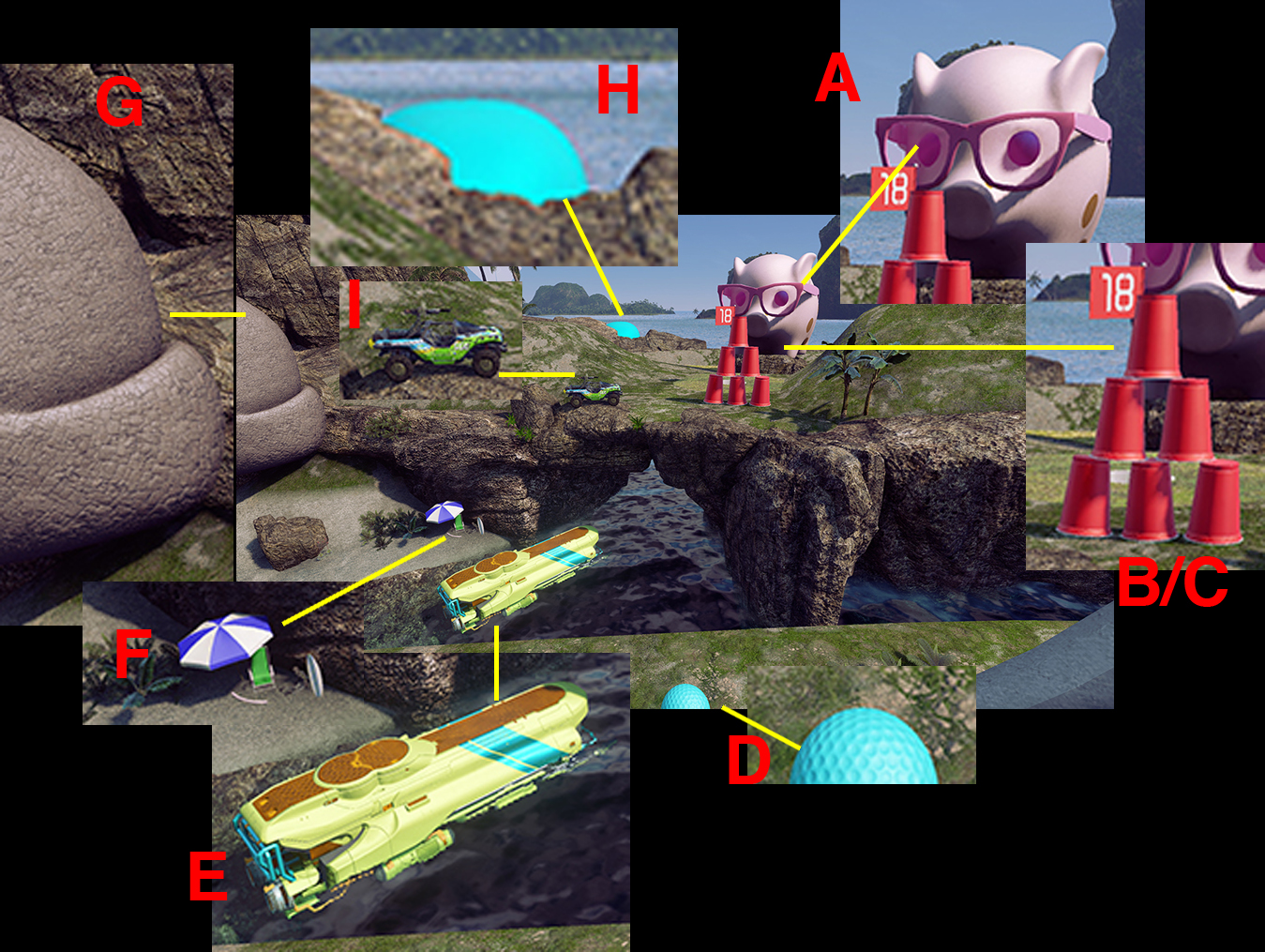 Starting Clockwise from just right of top-mid:
A. Once again we have Olive the pig and she is BIG! So, I’m, guessing either super sized or hopefully scaleable object? Those sunglasses are still saying ‘transparency’ to me as well. I hope so!
B. First, B is for the flag. Indeed, it looks like we will have Golf back as we are getting the Golf Club and ‘D’ shows a Golf ball. So perhaps the ’18’ is the Golf cup as has bene in previous Halos.
C. These are those Solo Drinking cups. Hmm..are they going to replace the Golf cup or perhaps are these made for a Halo drinking mini-game?
D. Yep, a Gold Ball, but notice it’s not just white? So we will be able to change the color of it!
E. This is the submarine on Fathom. Oh, I can think of SEVERAL ways I can put this into the map and most of them not to be used as a submarine. Looks like this one will be able to have multiple color changes to it as well.
F. Beach gear! Umbrella, Chair, Surfboards! Cowabunga dude!
G. What’s this? We get to add texture to props? Maybe it’s just for Timmy the Whale. But hopefully not. Still, pretty cool!
H. A large sized Timmy, just as Olive is large too? Hmm…
I. Is this a Gauss version of the Rally Hog?? Regardless, it means the REQ Vehicles (if not weapons as well) will be available in Forge!

As I also correctly surmised, not only are we getting the previously revealed Temple Banshee, but we are getting as Temple Ghost and Wraith as well. Now, what abilities and/or armor these have in comparison to other ships, we do not yet know. Personally, I’d love to see these invulnerable to EMP, but that would be a bit OP.

Not only are we getting those revealed Brute Plasma Pistols, we are also getting THREE versions of the Halo 2 Beam Rifle. I’m stoked for those!

And to further stoke the stoking…(is that a word?), we get a stance with the Beam Rifle as well!

As I mentioned before, I’m already a fan of the Cinder set. The Cyclops helmet isn’t a good design, IMO, though I like the armor. And Fenrir is a good choice for another variant.

Since we already have an extended clip mod, I have to think that this is an extended RESERVE clips mod. Can those be coupled? That would be EXTREMELY helpful, if so. If not, then which would be better to have? Personally, I would still go with the extended mag as ammo is pretty easy to come by for the most part.

Again I have to say I am EXCITED by this addition to the UNSC arsenal! The hybrid look of the Hornet and Sparrowhawk is undeniable. As such, the WASP fits perfectly into the aesthetic of the UNSC. That it’s going to be in FORGE as well? Someone pick me up, I just fainted…..

SO what REQ or REQs are YOU most looking forward too? Out of all of the actual REQs, for me it’s the WASP. Game Mode, it’s Firefight, hands down, and map…Forge’s Tidal. SO much potential there!