I had a minor glitch in that I couldn’t choose the WASP. I had to restart my XBOX One to get it to work. (SO do that if it doesn’t work for you)

Anyway, as soon as this dropped, I immediately got into Firefight. Now at first the REQs weren’t available. It took about an hour or two. Once they were there to get though, I bought them all. I had saved up more than 500K REQ Points. So I was set.

For my first match of Firefight, it was on Apex 7. Decent. Nothing to memorable at first as the new REQs weren’t there yet. We didn’t face the Gruntbuster in that match. Okay, no worries. It kind of eased me into Firefight.

But the next match? YES! I got Sanctum. This map is BEAUTIFUL! There is a clear delineation between sides. One side is rocky/sandy, while the other has hills lush with green foliage. That middle Temple area is fantastic. Be sure to explore as much as the map as possible. It took me 3 times to play on it to have traversed much of the map. Later on, I went into theater and really explored the map.

What was great on Sanctum was fighting the Gruntbuster (Yes, that’s my name for it, not the Goblin). It’s not just tough (surprisingly tough), it’s HILARIOUS! The grunt ‘jockey’ is quite the smack-talker!

I went into theater and got a few shots of the Gruntbuster. First though, I wanted to see if I could get a shot of the Grunt Jockey. BAM! Nailed it!! 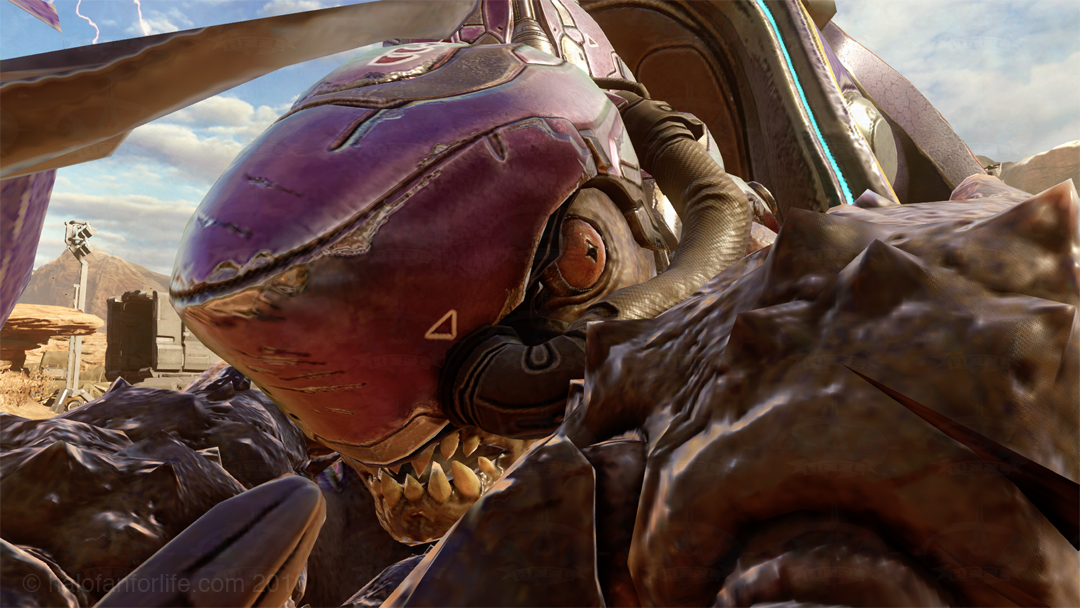 Below are four shots of the mech. Normal, light damage, the cockpit shield being torn away and it’s ‘death’. What was great was that it stood there for a second before finally falling forward in a dead fall! 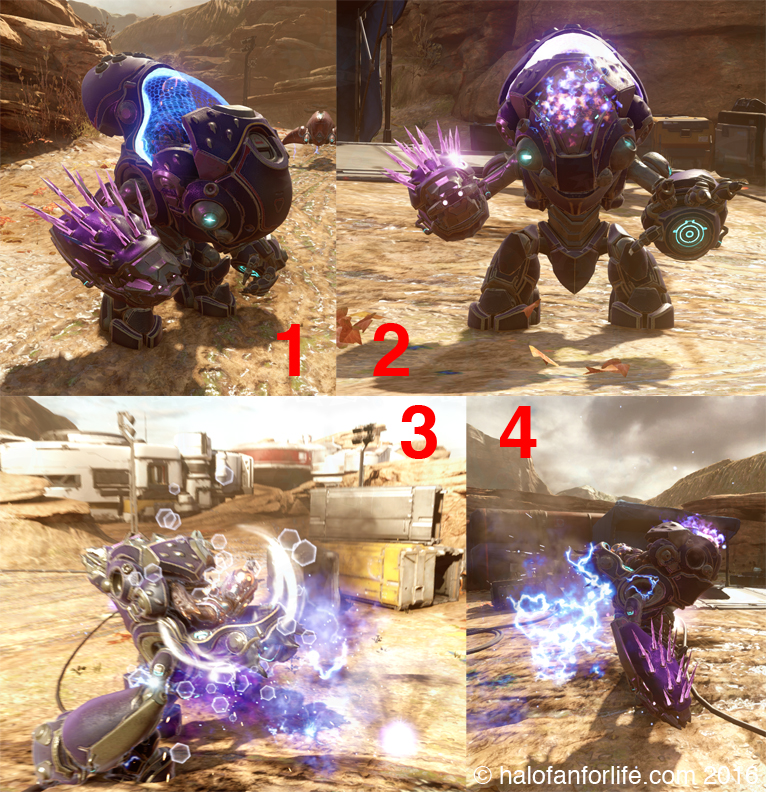 Once I was able to use the WASP I found it to be quite fun. It maneuvers pretty well. It’s NOT the Phaeton though. It doesn’t have a thrust ability. It does hover very well and moves pretty quick. Now, as for the armor and armament… Well, be thankful you have shields. The armor itself, once the shields have been depleted is kind of weak and you can be taken down quick. The armament is good for infantry and small vehicles. As for big guns like a Wraith, Scorpion, or Phaeton, for examples, you will be fighting a skewed battle AGAINST your favor. So be careful. That said though, it was thoroughly exhilarating to fly a WASP and I’ll be using it often! Thank goodness it’s only a level 3 REQ. You can call it in early that way. Just don’t expect to take down the Warden with it….

As for other bosses, me and the fellas I was gaming with (most from the official HFFL Spartan Company) faced off against the blue Wardens, the crimson wardens, white hunters, scores of Phaetons, Banshee raiders and so much more. There really is a large selection of bosses to play against.

As for objective rounds, there we several protect ‘this or that’ type objectives. One for instance was protecting a Forerunner generator on ARC. Whew, that one was tough at first as the enemies were spawning there before we Spartans could get to it. Those rounds got pretty intense as the generators were so close to being destroyed with scores of enemies around. But we pulled through!

I’d have to say the toughest round we faced consistently was facing two Didacts in round two. Since our REQ levels weren’t too high at that point, we didn’t have much fire power to take them down. Not to mention, there were LOTS of Promethean soldiers and knights shooting at us as well. It was particularly hard on Apex 7. So if you get that round, I HIGHLY suggest busting out the Ghosts! WASPs won’t cut it and load out weapons are near useless at that early stage in the game against Wardens.

The fact that there are 6 maps at launch of Firefight is a great thing. I never felt like were getting the same map over and over again. By the way, if you play on each map, you will get an achievement!

Now the kicker is that you will earn LOADS of REQ packs! I was getting 3-5 REQ packs per Firefight game. sometimes a few silver and the rest gold and sometimes all gold! The REQ points I had spent earlier to get all the REQs from this update had easily been replenished. In fact, I’m up over the amount I started with before Firefight yesterday!

You get these for a couple of reasons. 343 has made it so that you get Gold REQ packs for completing 1, 5, and 10 games. Better yet, you rack up commendations SO quickly in Firefight that you’re getting additional REQ packs like crazy! This may only last your first couple of days while playing Firefight. (We don’t know yet how long that will continue) So I HIGHLY suggest you get in there and play some Firefight!!

I have nothing bad to say about this iteration of Firefight. Just a few tweaks here and there, but that’s it really.

The whole longer respawn time as you get into later rounds make it more difficult, but that’s the point, so I’m cool with it, even if it’s a little frustrating.

Urban, the Warzone Assault remix of Noctus plays well with Firefight and gives you a good night time setting. With Apex, you’ll be on the Spire a bit and wow, does it get intense! Stormbreak is a bit linear and wasn’t all that tough. ARC still seems a little big for Firefight, but works fine. Darkstar is a great map for Firefight as it’s small enough that you can get around quickly to the action. And again, Sanctum, though LARGE, it’s absolutely FUN!

I played somewhere in the neighborhood of 20-25 games yesterday, for about 8 hours worth of gameplay. (I have to approximate this, so times may be off a little.)

All in all a VERY fun time. I suspect I’ll be playing a lot of this. Especially when I don’t feel like playing against other players and/or just messing around with friends/fellow Spartan Company members.