This article is conjecture, however with some research behind it to bolster my claim. If you’ve heard otherwise, please just hear me out…

Chances are, you’ve not only seen Atriox before, but have PLAYED against him if you played the original Halo Wars.

Atriox IS the unnamed Brute Commander in the ORIGIAL Halo Wars game!

So how did I come to this conclusion and what facts do I have to prove this or at least make a good argument for it? Let’s explore, shall we?

First, let’s take a look at the Brute Commander from Halo Wars. 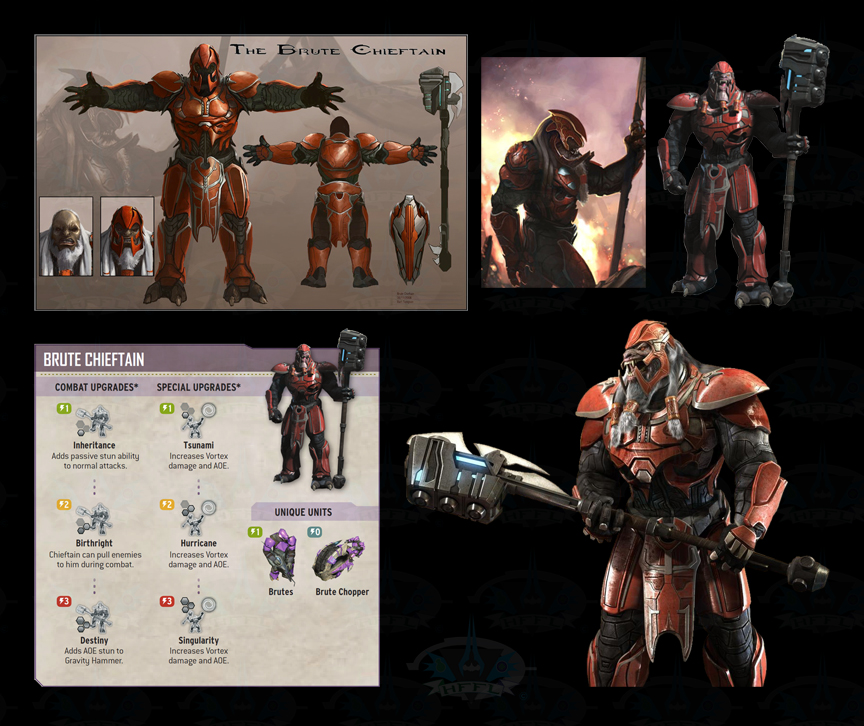 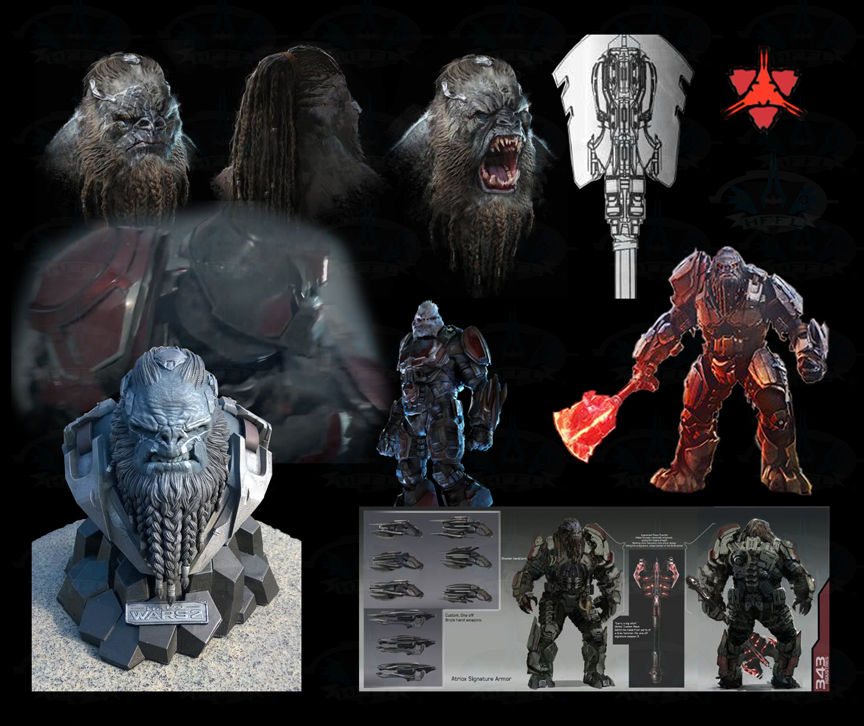 (In the image above, direct center and just left of center, these are Atriox’s soldiers, not Atriox himself.)

I suggest opening up those images in other windows as I’m going to reference them and a couple others durign this article.

Okay, so first the obvious, the are both Brutes…That won’t cut it though. So let’s take a look at some similarities. Atriox’s Banished use the Crimson color that the ‘unnamed’ Brute Commander/Chieftan does in the original Halo Wars. So it’s quite possible that’s a throw back color to his time in the Covenant, but just a portion.

Looking at the Hammer the Unnamed has and Atriox’s weapon, they have similarities. There are two notches in the Unnamed as well as Atriox. The notches are deeper in the unnamed though. So why is this? Well, this as well as other points elude to the passage of time. It’s been 28 years since Halo Wars and Halo Wars 2. Atriox could have easily modified his weapon during this time. Let’s also take a look at something else a bit more telling about the weapon itself. The Unnamed Brut’s weapon has the ability to PULL enemies closer to it. *

We’ve seen in one of the trailors for Halo Wars 2 that Atriox’s weapon also draws enemies TOO him. At 3:35 of the vid below, you can see that in action.

There’s another interesting notation about the Unnamed. It is said he was VERY intelligent and a capable tactician. *

As we know, Atriox is the most intelligent Brute that we know of so far in the Halo universe. Obviously with his rise to power he’s become a master tactician.

One thing that derivates from the two are size. However that too can be explained. In Halo Wars, the Unnamed is said to be smaller than the average Brute. Yet Atriox is the most massive. Well folks, again, it’s been 28 years. He grew up. I also make a point that when allowed to flourish, things that are small can grow larger. Case in point, fish. Often fish that are raised in large tanks are larger than those raised in smaller tanks. This absolutely has everything to do with having more room to swim around. Perhaps, that is similar in the case of the Unnamed/Atriox. He was a Brute Commander in Halo Wars, yet still had to answer to higher ups. When He broke free of that and amassed power, he grew. This can be said of Tartarus as well. We know He was also larger than the average Brute at the height of his power.

Let’s also look at the fact that the Unnamed was just that. Maybe not important enough for a name, YET… It could be that this Brute was planned to be the baddie in the next Halo Wars all along. It’s just now taken this long for that to come to fruition. The fact that Atriox does not have the typical ‘us’ after his name to denote adulthood (making his name Atrioxus) is curious. However, he could have chosen not to take the ‘us’ into his name. And did you also catch that….by adding the ‘us’ to his name, it ALMOST spells out Atrocious. Ok, maybe that’s a little bit of a reach, but I don’t think it’s that far off the mark.

Going back to the Unnamed compisition pic for a moment, not some of the similarities between it and Atriox’s armor? 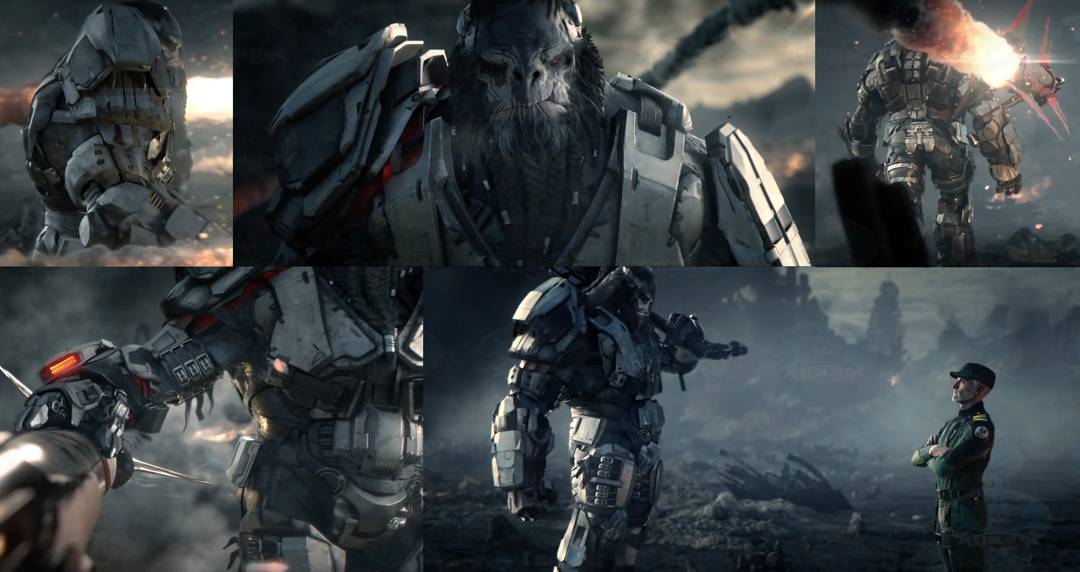 Onw of the biggest tell-tales is the shoulder armor and a bit in the chest armor. Large bulbous shoulder armor for the Unnamed and Atriox has at least for the one, a VERY large piece of shoulder armor. In fact, it looks like it’s stacked armor. Could be both shoulder armors were fused. Why? He may have been hurt in battle on that shoulder and needs added protection?? Also note in the Unnamed’s composition the large shield. As Atriox grew, he very well could have just incorporated that into his armor.

Here’s another point of reference between the two. Their beards. While it’s not uncommon for Brutes to have facial hair, the Unnamed and Atriox both have very long beards. The Unnamed’s beard is slightly braided, whereas Atriox’s beard looks well kept and much better braided. A product again of time elapsing from Halo Wars to Halo Wars 2.

Let’s take a look at the character card that came with the Halo Wars tin, for the Unnamed/ 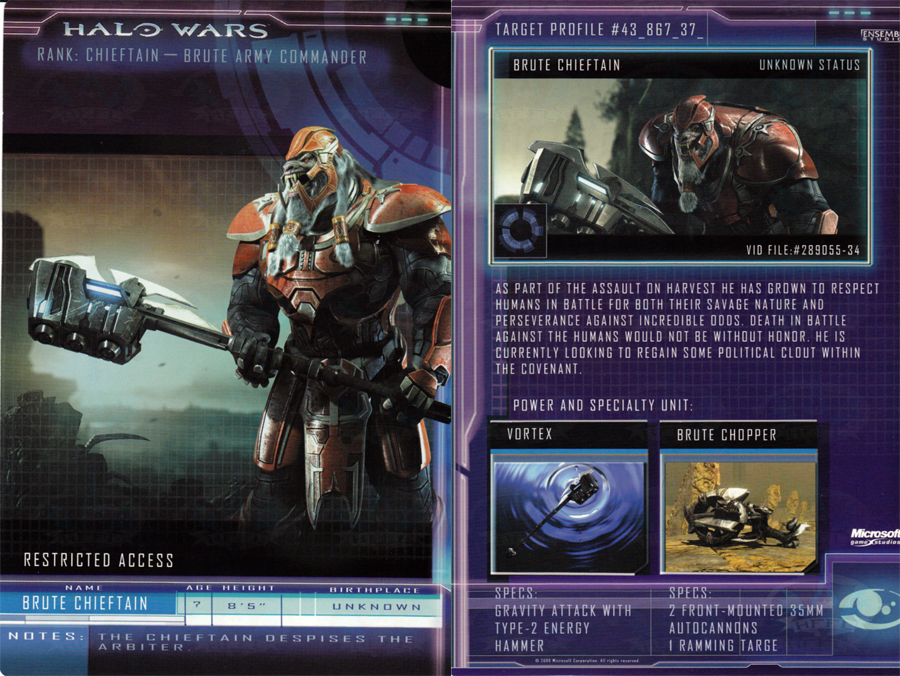 On the left, at bottom, it reads that the Chieftan despises the Arbiter (Ripa Moramee). Most Brutes during this time were loyal to the Covenant. The great schism wouldn’t happen for another 20 odd years, so a Brute despising an elite, especially the Arbiter was VERY out of the norm.

We know from what’s been revealed of Atriox, that he was the FIRST Brute to object to the Covenant and leave it. It very well could have been the failure of Ripa that led to this or at least added to Atriox’s disdain for the Covenant. (His tactics being superior)

Now on the right side of the image above, it reads that the Unnamed had grown to respect humans for their savagery and perserverence against incredible odds. Savagery of course is something all Brutes are known for. But the perseverance? Not so much. But as a Master Tactician, Atriox would very much was to persevere so that he could continue to lead his troops.

It’s said the Unnamed likes his meat cooked. This is something that would be expected of a disciplined and refined leader, such as Atriox is known for as well.

There is another point that I think is pretty telling. The Unnamed we can assume goes against Red Team. At least he does in matchmaking… Anyway, through his prior experience fighting Spartans, as Atriox, he is well more prepared to face the SAME Spartans again, 28 years later.

Now, I’ve looked up the cast for both Halo Wars and Halo Wars 2. The Unnamed is voiced by Marc Worden while as yet, there is NO listing for who voices Atriox. I shall be looking into this further and report back when I find out anything concrete. None of the principal cast from Halo Wars is returning for Halo Wars 2, so this might not mean much. But if Marc Worden is the voice of Atriox…well then…

Okay, so let’s simplify this a bit:

So what say you? Do you agree? Disagree? Have facts to add to this or denounce it? Let me know by replying below! If you’re not yet registered, please do, it’s free. In the meantime, you can also respond to this via my tweet on twitter about this.

Now, let me say this, if I’m wrong, I’m okay with that. I ALWAYS enjoy exploring the Halo Universe. My points I think make sense, but then, 343 can always reroute things. So I guess we will have to wait and see. But oh man…if I’m right…!

2 thoughts on “Atriox: We HAVE seen him before AND we have FOUGHT HIM!”