Okay, so this game is currently cancelled.

However, just revealed yesterday on Kotaku, we see that indeed there was a Halo Mega Bloks game in development. And not just easrly stages either! Just take a look at the gif below!!

The game was being developed by NSpace, a now defunct developer. The gif you see above was of the development stage around fall of 2013. It was being developed for the 360 as opposed to the new XBOX One (at the time). Perhaps this is one reason it was cancelled? I’m not sure why this couldn’t have been ported to the XBOX One. The game used the UnReal engine, that I understand works on the XBOX One.

Now, before I get too far into this article, let me address something. I’m sure some people will say, well why not LEGO instead? There are a couple of VERY good reasons for this. First and foremost, Mega Bloks has had the license for Halo building sets since 2010. As well, LEGO is notorioulsy know for not taking on licenses that have realistic military weapons. Star Wars seems to be the exception. (And I mean, come on, Lego KNEW that would be a MASSIVE money maker for them.)

One thing I’ve heard from other Halo fans in the past well before this news of the cancelled game even made it to light was this: Why even have a game like this? Allow me to address that as well.

First, with Lego games begin VERY popular, it makes sense that Halo has a building bloks game too, especially considering it has a long standing building bloks line attached to it and a huge fan following of those sets.
Two, this allows Halo to bring in YOUNG fans. Kids who are too young to play the more mature rated games. Consider it a ‘gateway’ game to the mature games, once these kids grow up.
Three, uh…grown ups like these kinds of games too.

So for those people saying something on the order of “This will dumb down the franchise. OR This will kiddyfy the franchise.” I say you’re being very short-sighted. Again, there already has been a long standing building bloks line, an action figure line (now with TWO companies), POP figs, etc. So, that argument just doesn’t hold ANY weight with me. If people want to play the more serious games, by all means, please DO. However, there IS already a big audience for this type of Halo building bloks game. How do I know? Well, if you’ve been coming to my site for any length of time, you KNOW I love Halo Mega Bloks. I”m well connected with the fan community there and MANY of those fans are saying the same thing. They WANT this game!

I’d go further to say, why ruin this opportunity for not only we fans who want the game, but for a developer to make money from it? This game could lead to other franchises in this venue. Okay, let’s move on from that, shall we?

The code name fo the game was “HAGGAR.”

Let’s take a look at some screenshots from this build and I’ll explain some things along the way. 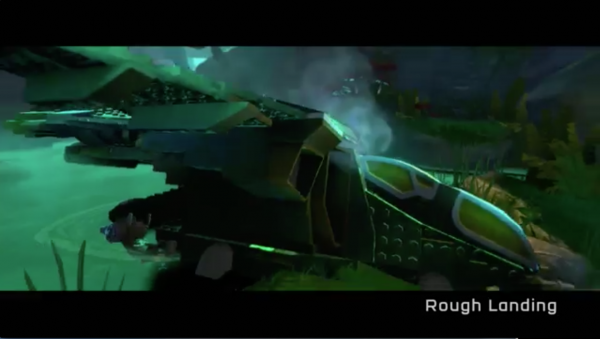 Here we see the Mega Bloks version of Master Chief on a mission to find a base. 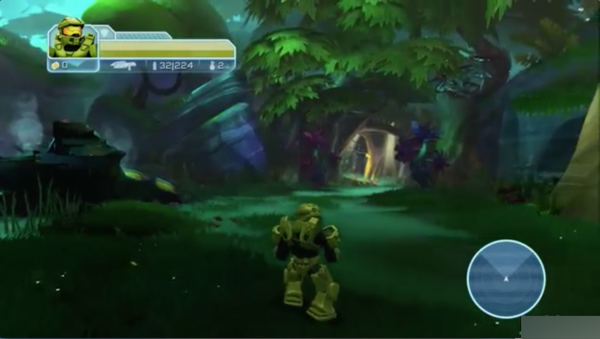 I love that not only has the bubble shield been brought back, but that in this version, it’s the Mega Bloks style! 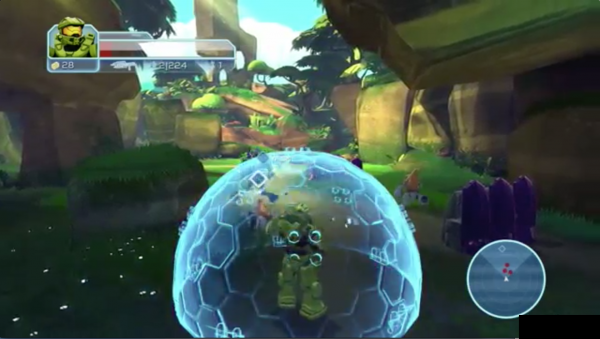 Yes indeed, we have Needlers in this game!

CHief finds some Forerunner architecture along the way.

In the below two-shot, we see that you play as a different character. This one has Scout armor. Here the character is using some sort of building pad to make a turret. 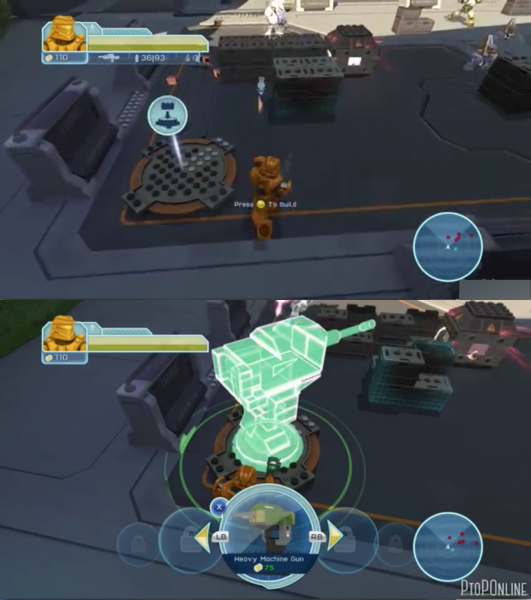 A shot showing the size comparison of the Hunter and your spartan in-game. Of note, this Hunter is not the same as the current Mega Bloks HUnter models and it’s MUCH bigger by comparison in the game, than to the real life toys. 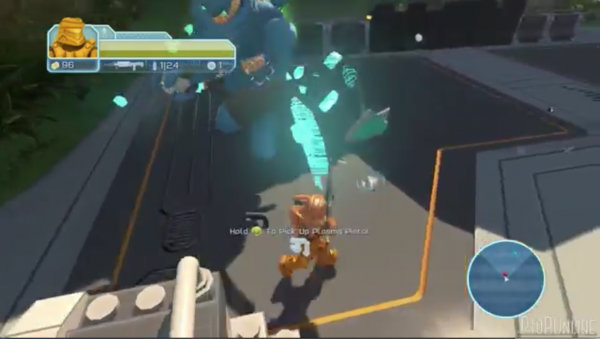 Below we see the various weapons and some of the planned vehciles. Note the VTOL in the vehciles menu. You’ll see that later. It’s interesting to note though that the VTOl set was released in 2013. This game was being developed at the same time. So NEW sets were already being introduced into this game during development! 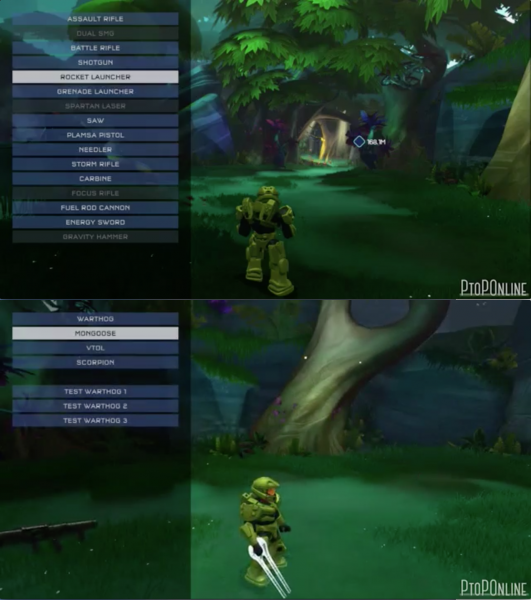 The below two-shot shows that we would have been able to customize the paint job on the warthog. Presumably other vehciles as well. I really like that. Now, of note here, the warthog you see is the Halo 4 version. You can tell by the roll bars. So this is something that was preplanned and put into this game, LONG before Halo 4 came to retail.tom-paint-531×600.png” alt=”custom-paint” width=”531″ height=”600″ /> 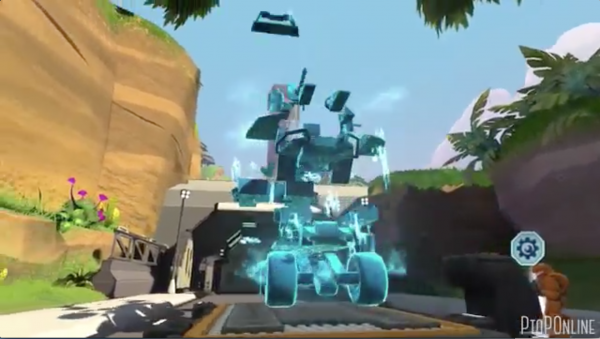 Finally we would have got to use that cable! Here the warthog is pulling the plug on that shield. 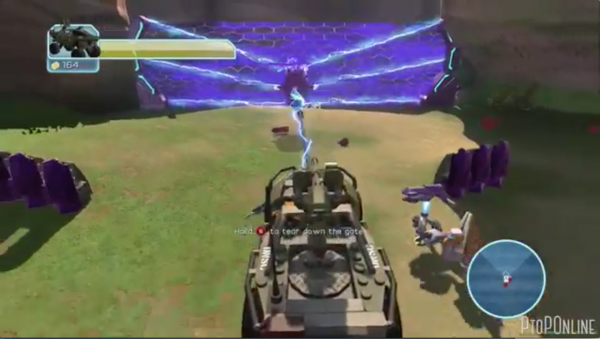 Yes indeed, active camoflauge was in this game! 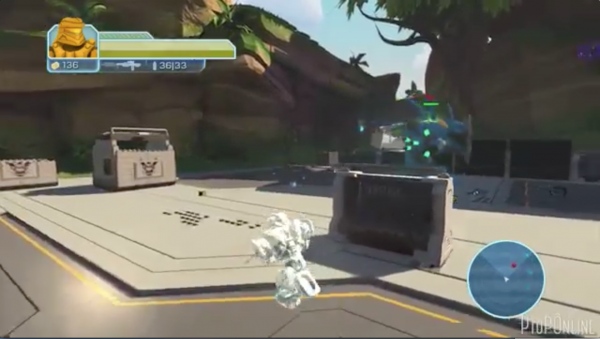 Just look at that environment shot! Sure, it’s more kid like, but I LIKE that about this game. This kind of reminds me in part of Ratchet and Clank or Jak and Daxter. Both franchises I LOVED before I made the switch to XBOX.

During the game, parts of it turned into a platform1 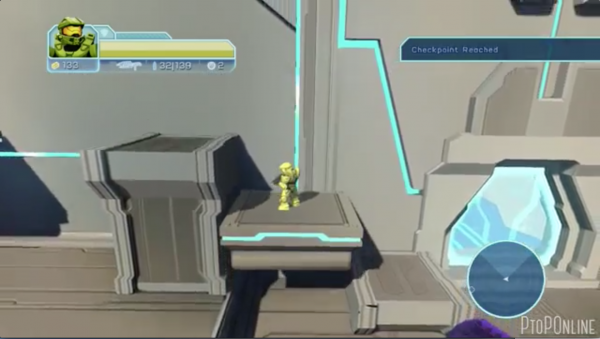 Further along in the mission, you come to this point where you have to hop onto the platforms in a specific order. SO we would have got puzzles too! 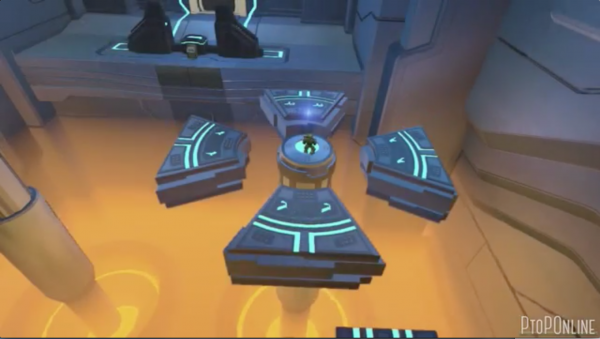 CO-OP!!!!! This is prehaps another reason why it was cancelled as we can’t play co-op on the One, so it wouldn’t import properly. Damn shame… 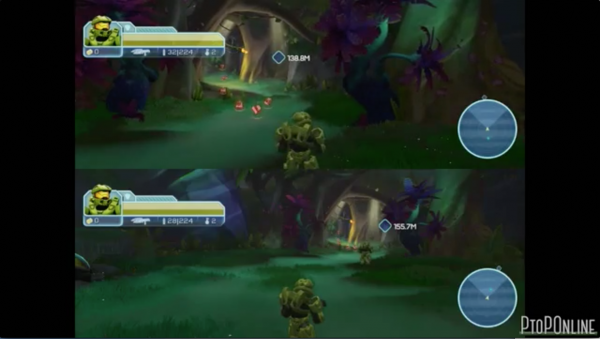 Have you ever wanted to board a Hunter, like Chief did in the FOrward Unto Dawn miniseries? Well, guess what? You COULD have in this game!

The game would have also featured Ghosts that are far more destructible than those in the regulard FPS game! 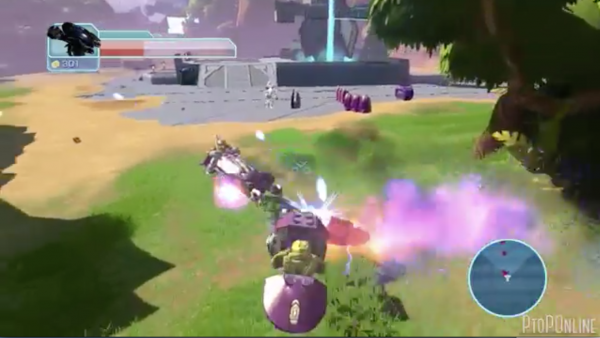 Of note, the Grunts in this were the generation 1 variety. They’ve since been upgrade to be bigger and have more articulation. 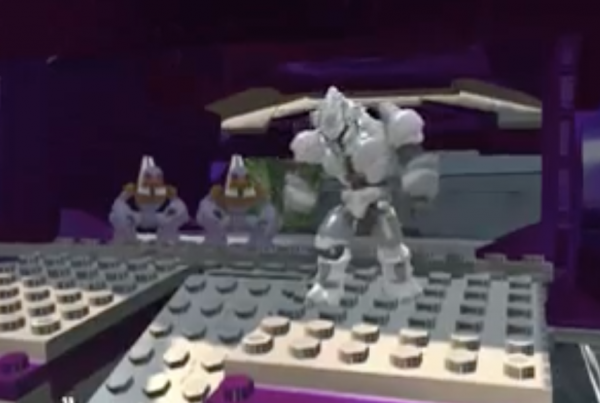 It’s noted in the article on Kotaku that in another interview, Bonnie Ross (head of 343) said there were no plans for this type of game. Obviously that’s not the case, or wasn’t for awhile. Besides, we’re kind of used to 343 skirting the truth about these things. My HOPE for this being revealed is that there IS enough of community support to SHOW 343 that indeed, this game should be develioped and we would buy and play it!

There was a Scorpion in this build. That one may have been current at the time but is now rather old.

As well, the mongoose is the original version, wereas now, the newest Mega Bloks Mongoose has taken on the Halo 4/5 look. 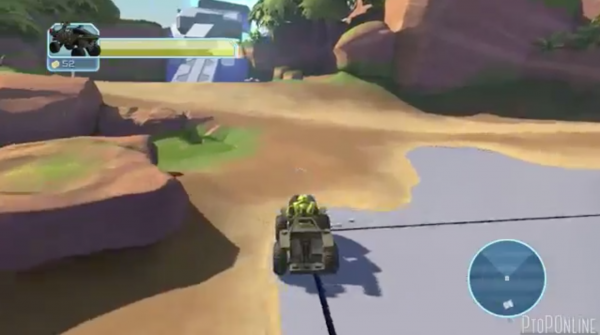 Here is the VTOL reference earlier, in an unfinished level. This is the first go at the VTOL that Mega made. It was part of the short-lived REAP-X Halo line form Mega. It’s since been used in Spartan Strike and was repainted to be green and renamed to be the “Kestrel.”

So what do you think? Should this have been or should still be made into a game? I for one am VERY MUCH in favor of this!!!

If you want to see the game in action, here is the video: