This brand new series is a break from the normal military lettered series. (Alpha-Foxtrot) I’m not sure if we’ll see those return or if Mega is going a new direction and naming the blind pack series differently. Regardless, we have a VERY cool new wave of figures with Challenger, so let’s take a look at each!

As you can see, the theme color for this series is GREEN! (BTW, there is another series soon to hit retail called Warrior and it has a RED theme, but I’ll cover that another time.)

Here are the 8 figures that come in this series. So far, there have been no reports of a chase figure. Should that be the case, you can bet I’ll inform you of it!

As you can see the Brute and ODST are rare, while the translucent Helioskrill is ULTRA rare! The rest are all common, which bodes well for those of us wanting to army build the Grunt and Marine. 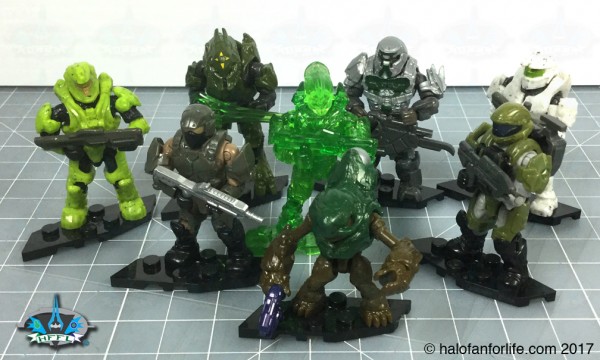 Let’s discuss the individual figures, shall we?

White Mark IV Spartan
Now, I bet you’re saying, wait, it’s not green. Well, the visor is, so that counts…LOL.  He comes with an olive colored Assault Rifle. I like this figure. We rarely get green visored figures, so this is exceptional. I’ve become a big fan of the speckling in the armor. It makes it look grittier and a bit war worn. The color of the weapon is great! This figure has the standard Human Gen 2 articulation.

Lime Green War Master Spartan
The War Master Armor is one of my all-time favorites of 343’s Spartan Armor. That it comes in Lime Green, which is my second favorite color, is an added bonus to me. Once again the speckling is present. Now, while I do very much like the figure, the visor isn’t painted prefectly. This likely is just my figure, so I wouldn’t worry about it, if I were you. The bright green as you see is a bit different, so it’s going to depend on your own tastes if you like it or not. Again, for me it’s a HUGE thumbs up! It also comes with an olive green Hydra! This figure has the standard Human Gen 2 articulation.

Light Olive Green ODST
YES! THIS is the ODST we’ve been waiting for! Allow me to explain. While the armor color isn’t game accurate, for me it’s more so the color of the UNDERSUIT! That grey is something that makes this figure much more realistic to the ODSTs than we’ve had before. If it had been either speckled with black or had the grey/black camo color, it would have been over the top! There is a NEW backpack that comes with teh ODST so that’s a great bonus. The peg that juts out from the backpack is long enough to fit in the back hole and gives it a snug fit, so no worries about it falling off. The Assault Rifle comes in the same grey color as the backpack. Now that we have an ODST with the correct color undersuit, I hope that ALL upcoming ODSTs have the same color. When we get a dark grey ODST armored figure with this undersuit we are at near PERFECTION! Suffice to say I’m VERY excited about this figure and the prospects of more/new ODSTs to come. This will be a squad builder for me, if I can find more of it. This figure has the standard HumanGen 2 articulation.

Olive Green/Beige Marine
Okay, gotta say this is my FAVORITE Marine of all time so far! LOVE the colors of it!! This marine can fit in well with the Halo Wars 2 marines as well as the Halo 3 marines!! This is definitely an ARMY builder for me! I hope to snag at least 12 of these guys if not more (if I can find and afford them…) This figure has the standard Human Gen 2 articulation.

Green Grunt
This is the FIRST of the Gen 3 Grunts. By that I mean it has removable armor and added articulation!  (I’ll show a bit more of that below!!) The green color here is a nice dark rich green. The figure itself has an olive green coloration to it. It comes with the new style Plasma Pistol.

Green Elite Zealot
Zealots are always nice to have. While this isn’t a game accurate color, I like it. The trans-green energy sword really ADDS to this figure! This figure has the standard Elite Gen 2 articulation.

Green marking Banished Brute
The Banished Brute has recently come out in other sets. There is the Halao Wars 2 campaign accurate Red version that comes with the Banished Ghost. As well, there are Blue and Orange versions that come in the Brute Custom Weaponizer pack. This green version is the first one to be packaged individually. It comes with a dark grey Bruteshot. The armor is a great sculpt. My specific figure has an anomaly to it though…It has two LEFT legs….UGH. SO I’ll have to contect Mega to get a replacement. This figure has the standard Brute Gen 2 articulation.

Translucent Green Helioskrill Spartan
While you may think this is an Elite figure, it is not. It IS a Spartan. To me, THIS is the gem of this wave of figures. But then, those of you who have been following my site for some time already know that I was going to enjoy this figure. For those who don’t know, I’m a BIG fan of see-through toys! This figure comes with a trans-green Hydra! And to top it off has a trans-green figure stand as well. This figure has the standard Human Gen 2 articulation.

Okay, now let’s take a DEEPER look at that Grunt. Since it has new articulation as well as now removable armor, I wanted to showcase it here.

Follow the numbers to see how to build this little guy.

1. Unassembled
2. Add torso armor to the grunt’s torso.
3. Add the legs
4. Add the head
5. Add the ball on the backpack
6. (not really a step, I just turned the figure around here)
7. Add the arms. Note that these arms have new shoulder aritculation! The wrists still turn 360°.
8. Add the helmet and the figure is complete!
9. If you want to, you have the option now to have an unarmored grunt!!

Here are more shots of the unarmore grunt. LOTS of detail in such a small sculpt!

A close-up of the head even reveals the slight divots in the nasal area of the grunt’s head. The hole on top is where the helmet attaches too.

Additionally the grunt now has FOOT articualtion! Going left to right in the graphic below, you can see that I spun the one foot around. Then, I pivoted the whole body the on the other foot. This was unexpected but VERY much welcomed!

All in all this is a SOLID wave of blind packs. There is a lot of collectability  with this wave as it offers something for evryone. Like Spartan, you have THREE, one of which is translucent. Like army builders? You have the Grunt, Brute, Marine and ODST to arm build. Lkke Covenant figures? There is that cool Zealot!

Whomever was involved in the decison making as to what figures would go in this series gets an A+ from me! Great variety in a small wave. I actually really like that it’s a color themed series too, even if the base color has different shades of it. Weapon selection is good too.

I can’t find any stinkers in the bunch, I like them ALL.

Do I recommend it?  HECK YEAH!