The Halo Wars 2 Blitz Beta is underway and if our own experience is any indication, you may be finding yourself on the losing end of matches far more than emerging victorious. Thankfully our friends over at Prima Games have put together some of their insider tips and knowledge to help us all improve our Blitz skills for the final stretch of the beta! 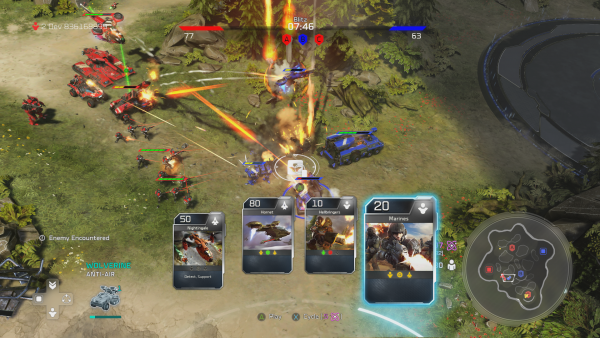 Halo Wars 2 Blitz Mode does away with the base-building, research, and unit-training found in other game modes. Instead, this card-based game mode features simplified resource management and greatly accelerated army growth.

In a Blitz match, you have 12 minutes to score more points than your opponent. You only earn points while you’re holding more Control Zones than the opposing team. The match goes to the first team to earn 200 points or to the team with the most points when the allotted time expires.

Of course, accomplishing this simple objective is easier said than done. Before you head into your first Blitz match, familiarize yourself with these core mechanics and strategies.

Your card hand consists of 4 Blitz cards drawn from a 12-card deck, and each card in your hand carries a specific Energy cost. Playing a card automatically deducts the required Energy from your reserves, after which it summons the corresponding unit or activates the indicated power. The played card is then placed on the bottom of your deck, and a new card is added to your hand.

You also have the option to “cycle” cards. This process allows you to move a target card back into your deck, allowing a new card to take its place in your hand. Cycling carries a flat fee of 5 Energy per use.

CHOOSE THE RIGHT DECK FOR THE JOB.

Every leader supports a variety of playstyles, but because each leader offers different starting armies and exclusive cards, different leaders lend themselves to different strategies:

Starter decks tend to offer a good balance of cards meant to highlight a leader’s strengths, but you’re free to edit them as you see fit. As a rule of thumb, a balanced deck contains 10 unit cards and 2 power cards. Other combinations can certainly be effective–particularly if you’re playing as part of team—but when you’re building new deck, this is a good place to start.

Typically, a balanced deck includes at least one card for each of the following unit types:

The cards you select to fill these roles will serve as the core of your deck—if you’re aiming for balance, avoid choosing cards that are too costly to use early in a match. Build a balanced core, then fill in the remaining slots with whatever specialized cards support your intended strategy—and don’t forget to experiment with your chosen leader’s starting armies.

MAKE USE OF YOUR HOME BASE.

Your Home Base doesn’t just serve as the point of origin for your team’s starting armies; it also performs two vital functions for the duration of the match:

In most cases, summoning a unit outside of your Home Base results in Deployment Fatigue. Units afflicted by Deployment Fatigue suffer a 50 percent penalty to health and damage for 8 seconds. If the fatigued unit has avoided taking damage during this time, it will recover all of its health. If not, the unit’s health will remain compromised even after the effects of Deployment Fatigue have faded.

Each player begins a match with 50 Energy. Additional Energy is generated over time, and you can increase the rate of your Energy income by claiming available supply drops.

In Blitz, supply drops occur at predetermined times. Initial supply drops come very early in the match with steady drops of additional energy cores coming in after that. The time and quantity dropped will vary based on team size. Note that failing to collect existing crates will prevent additional crates from dropping.

WHEN YOU CAN’T CONTROL, CONTEST.

If your army isn’t strong enough to reclaim a vital Control Zone, use fast-moving units to harass defenders—charge in to contest the zone for as long as possible, and then head back to your Home Base for emergency healing.

Even without conventional bases, most multiplayer strategies have a place in Blitz. An early rush can weaken an opponent’s forces, making it more difficult for them to hold Control Zones or claim Energy. If you prefer Booming, focus on claiming supply drops and boosting your army with low-cost units. In Blitz, Turtling is a matter of map control; use a diverse mix of units and powers to discourage hostile forces from claiming Energy or contesting Control Zones.

All teammates benefit from the Energy Cells their allies collect. Coordinate with your team to ensure that supply drops are dealt with quickly and efficiently.

Make good use of your control groups—particularly in 1v1 matches. Form a group of fast-moving vehicles to deal with supply drops, use a slot to manage designated healers, or designate control groups that allow you to jump between units that are responsible for holding various Control Zones.

There’s a cliff overlooking each of the map’s Control Zones. If your army contains artillery units, try to place them on the high ground.

Some cards feature Keywords that indicate special abilities—many of which aren’t available outside of Blitz game modes. Whether or not you favor Keywords, it’s important to understand them. Abilities like Blast, Last Stand, and Siphon can quickly change the course of a match.

BATTLE YOUR WAY TO VICTORY WITH HELP FROM THE OFFICIAL GUIDE. 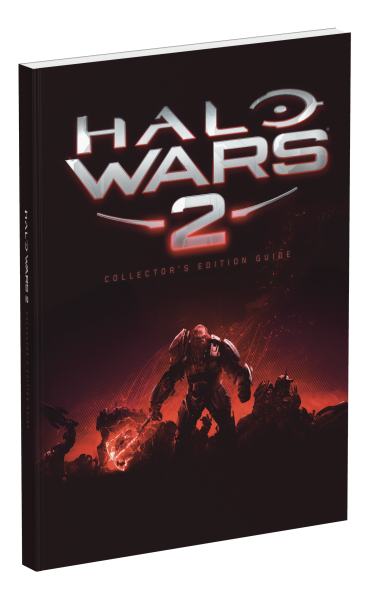 The tors-edition-strategy-guide”>Collector’s Edition guide also includes a Blitz pack to help expand and upgrade your card library, as well as a collection of high-quality clings featuring art from Halo Wars 2.

Along with a complete walkthrough of every single-player and co-op mission, you’ll also find maps and winning strategies for every multiplayer game mode—including the card-based Blitz and Firefight modes. From bases and units to leaders and powers, the information in this guide will give you an early edge in online competition.

HFFL: I am totally getting this! Not just for the tips, but as a collectible. The online stuff is VERY handy too! I’ll make use of that with my iPad.