Mega Bloks has changed it’s name to Mega Construx. For the sets I’m reviewing that still have the Mega Bloks logo, that will be present in them. The sets that are now Mega Construx will have that logo. With a possible couple of exceptions in 2017, all Mega reviews will be Mega Construx instead of Mega Bloks.

The box art is very cool. The window shows the figures prominently along with their respective named stands. 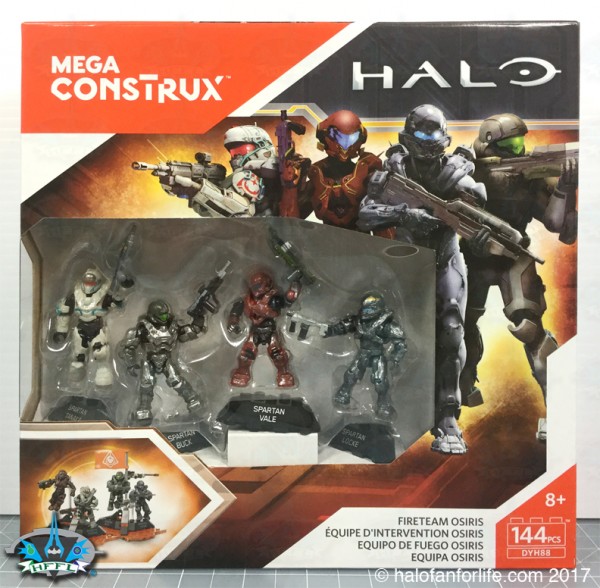 On the back of the box the completed display stand is shown in split view. I’ll get to the meaning of that momentarily. All of the weapons included are shown as well. Note the Blue Team is shown in preview. As of this writing, that set has not yet been found at retail. 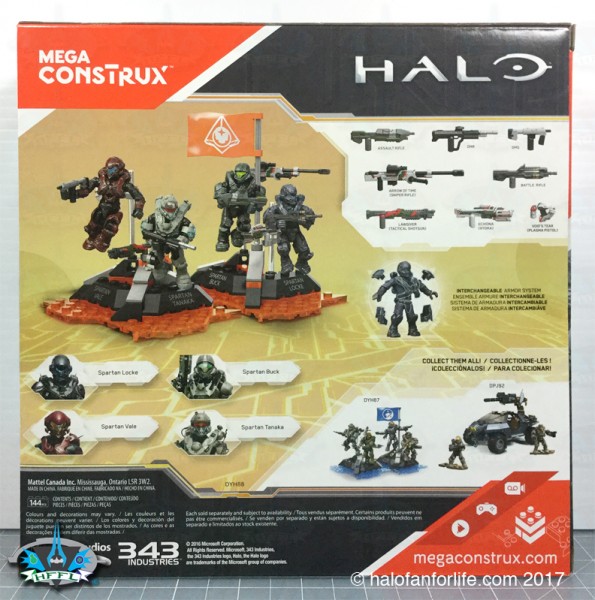 Here is what you get inside the box. There are no pieces in the white portion of the inner box. It would have been cool if there would have been a Halo 5 pic printed on the inside box. Just a notation though, nothing big.

The pieces sorted out. Plenty of translucent orange peices!! Yes, of course you know I’m going to comment on those. I LOVE translucent parts!!

Okay, lets look breifly at the stand. There are two halves. One half is for Lock and Buck, while the other half is for Tanak and Vale. You can swap these are you see fit though, so just take the named stand positions as a guideline. 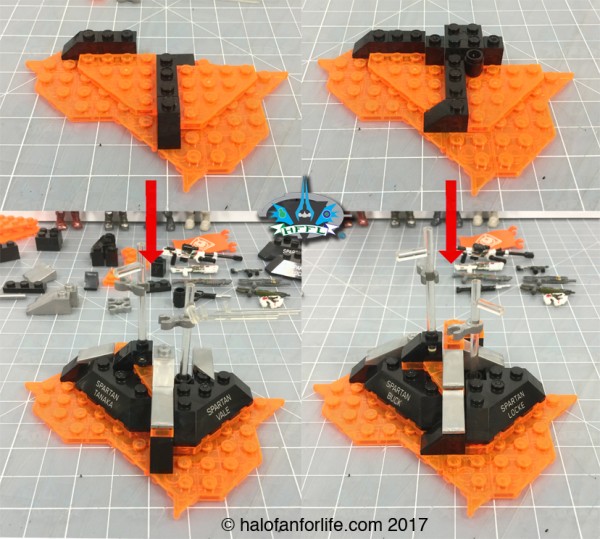 I mentioned above the stand being shown in split view. Essentially, the two halves as shown above are considered split view.

Here is the combined view. There’s a little slot that you build into the halves that allow for them to be placed together. It’s not permanent, which is a GREAT thing, IMO! 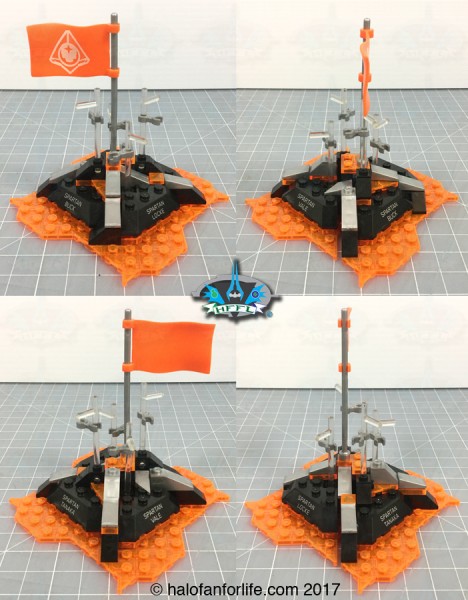 Let’s take a look at the AWESOME figures!!

Below I chose to highlight some of the detail While we’ve had the figure before, we’ve not had it in this much paint detail! Note the undersuit is the correct “shark skin” blue. The helmt on my Locke figure had a little run over of paint from the visor. I’ll have to touch that up later. On the top of the helmet, there is a nice sheen to the graphics applied to it.

Now it may be a little harder to tell in this lighting, but the armor has a lot of silver to it to show wear.

I’m VERY happy with the paint detail here. Those blue lines are VERY small, yet painted on appropriately. The armor sculpt is fantastic. This is the first version of this armor and I’m glad it was made as Tanaka’s first before we get other colors.

Now I know you’re probably saying, “but we just got a Vale in Halo Heroes.” Yes, you’re right. However, that one isn’t nearly as well painted/detailed as this one is, as evidenced below. Similar to Buck’s armor, Vale’s has a lot of silver on it to show wear. No shoulder pads for this figure. Slight bummer, but it does fit the in-game character, so not a biggie. 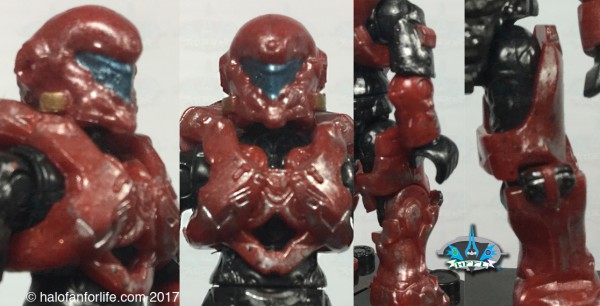 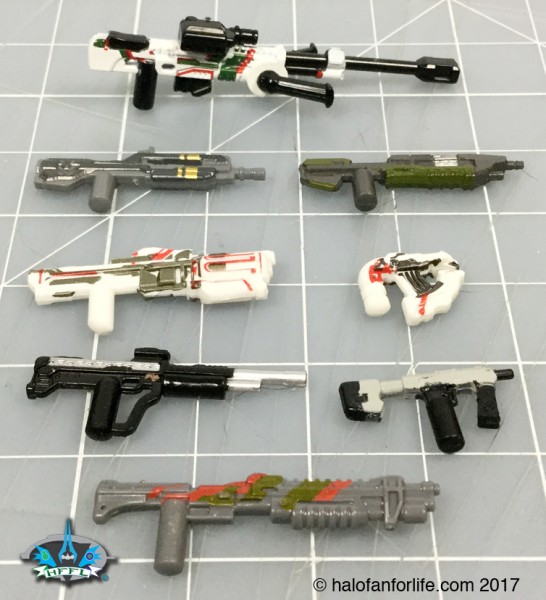 Let’s take a closer look at each:

Arrow of Time Sniper Rifle: The paint detail here is FANTASTIC! The line work is great and accurate. It’s immediately recognizable as the REQ weapon.

Battle Rifle: The darker grey on top of the lighter base grey of the weapon is nicely paint, as are the gold stripes. Also, look closely and you’ll see the Misraiah Arms logo on the butt of the weapon. Folksn that is DETAIL!

Assault Rifle: I love that the green was applied here. Even better that the small strip on the low end of the butt got that treatment.

Echidna Hydra: WOW is what I say to this. Just fantastic. Those are some teeny tiny thin lines and Mega hit them on the mark!

Void’s Tear Plasma Pistol: This weapon is so small that it was difficult to get a sharp crisp focused pic of it. Suffice to say, the detail is great!

DMR: This is a basic paint job on it. Which I’m okay with. That brownish fleck is paint. Not sure how it got there. Easy enough to fix. Doubtful this is on every one of them.

Lawgiver Shotgun: Once again the line work here is fantastic!

That we are now getting well detailed REQ weapons with sets is above and beyond, IMO. I for one am VERY grateful for that.

And here is the final set with the figures in place with their respective weapons and the additional weapons clipped to the stand bars. What a great way to display the team! 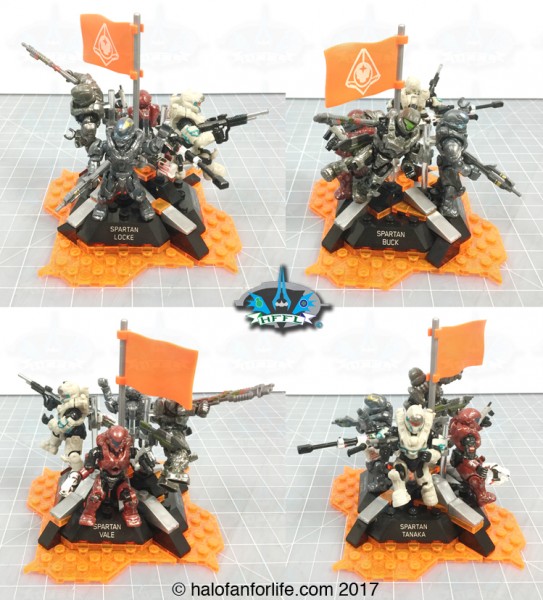 Folks, if you buy this set and just keep it in the box, you’re doing yourself a disservice. This set SCREAMS to be built and displayed. If anything, buy TWO sets then. One to keep in the box and another to build and display!

Summary: This set is a quick build. Well detailed paint aplications to the figures and weapons makes the set above and beyond worth the price.

Why did I give it a 10 out of 10?
• Simply put, there is nothing wrong with the set and everything is so much RIGHT! I could nit-pick, but I won’t.

Let me break down my opinion of the value of this set. (In US dollars)
• Each figure with one of the weapons each and the named figure stand is $3.50. Total of $14.
• The additional 4 weapons are averaged to be 75 cents each for a $3 total.
• The Osiris Flag and flag bar are worth $2.
• That leaves the buildable stand. The complete stand has 59 pieces. At the guideline of 10 cents per piece, that would put the value of the stand at $5.90, which I can definitely agree to.
TOTAL: $24.90 (before tax and in U.S. dollars)

Given that the set only cost $20 U.S. before tax, this set is WORTH the cost.

Now, I know some of you will say that we got Locke in the Vulture set, Buck in the Scorpion set and Vale in Halo Heroes, but as mentioned above, those were nowhere near the amount of paint detail as the figures in this set.

What I plan on doing is to have a scene with the highly painted figures as the focus. Then I’ll have another diorama with the previous ones in the background. In life, we do not see as much detail in things that are further away, so utilizing the originals ones in this capacity makes sense.

Do I recommend it?  MOST DEFINITELY YES!! Can I remark again how well painted the figures and weapons are? And my oh my, that stand is VERY cool! (I’ll likely rebuild it into something else, but that’s just me.