The box front features a cool action shot! As you can see by the window on the front of the box, the Brute Bodyguard doesn’t have the blueish sheen that it has in the action shot.

The back of the box gives us another look at the whole set, also detailing the weapons and figures included within. 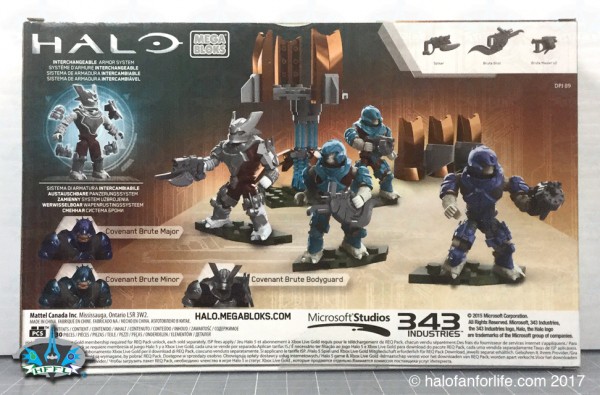 Here are the contents of the box. You get a REQ Pack card witha  code on it, an instruction pamphlet, tow large parts bags, 3 smaller figure parts bags and the plastic bubble that has the pre-assembled Brute Bodyguard. 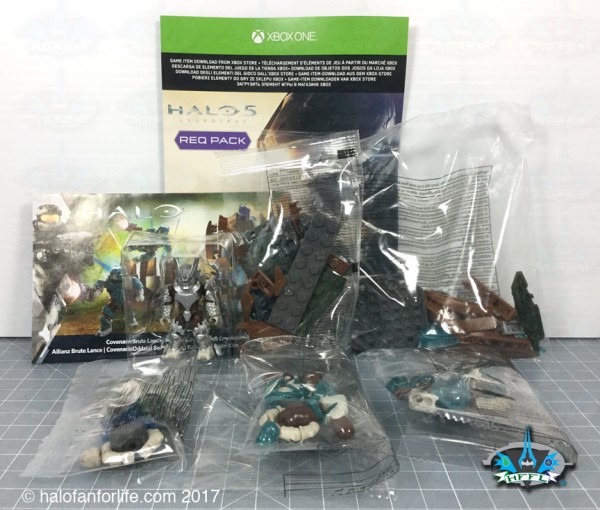 The pieces are all sorted and the figures have all been assembled. 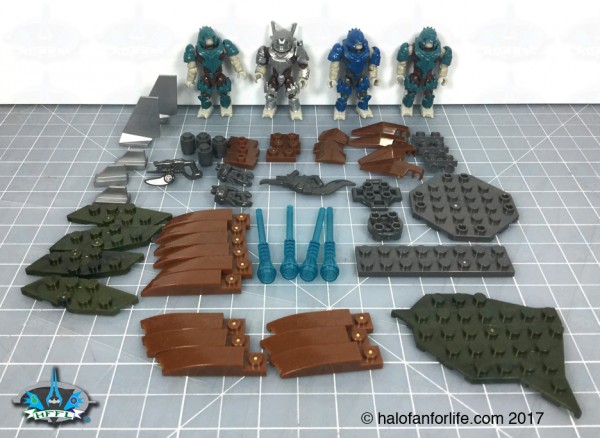 Ok, let’s get into the build.

This barrier is a little different from what we’ve seen of Covenant barriers in the past. It has a more “Halo Wars 2 Banished” vibe to it. I LIKE it as it’s more distinctly Brute than Covenant. I think the only thing I would have changed here would have been the colors. Make the brown silver and those silver fins that ruddy red color of some of the Brute’s under armor suits. That would have definitely been a Banished there for sure and this set could have fit in even BETTER with your Halo Wars 2 Banished army. As it is though, it’s still a neat little assembly. 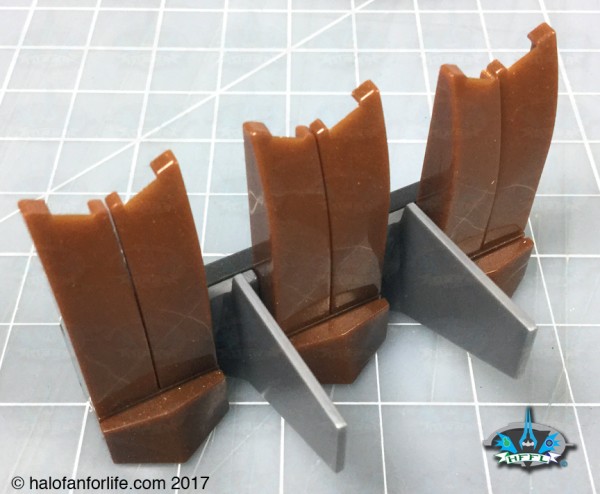 The buildable turret isn’t really anything seen in the games. It’s more a truncated version of the normal sniper tower.

Below I shot this in three steps. Let me explain why. To the left, you insert the trans-blue rods into a 2×2 plate with outside bars. Be sure to gently press that 2×2 piece all the way down so that it fits snugly and evenly at the bottom of the thinnest part of the rods (as shown). Next, you can see from the left a 2×2 round plate with holes. I highly recommend that you invert the tower assembly and press the rods into the holes on an even surface. This helps to ensure that the 2×2 piece is flush even. Then simply add the 4 1×1 cylinders on top. This really helps with the stability of your tower.

Next you add the tower top with the guard barriers  and attach it to the large breen baseplate and you’re down with the tower. 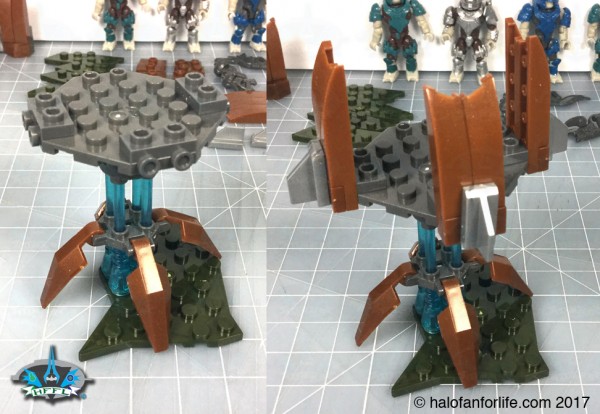 Brute Bodyguard: This for me is the gem of the set. While we’ve got this figure previously in the recent Brute chopper set, I really prefer this armor/undersuit coloration. For one it fits in VERY well with the Banished Brutes from Halo Wars 2, but also fits in well with Brutes from other Halo eras.

Brute Major: I’m really liking this armor. We’ve had this armor before but not in this hue of blue. It fits in well with Covenant era Brutes. Note the dark grey undersuit that differs from the ruddy red color of the Bodyguard and Brute Minors.

Brute Minor: Since both of the Minors are the same, I’m just showing one here. It’s the same figure as the Major, just with color changes.

And the whole set with figurs in place! Great little set here, IMO! 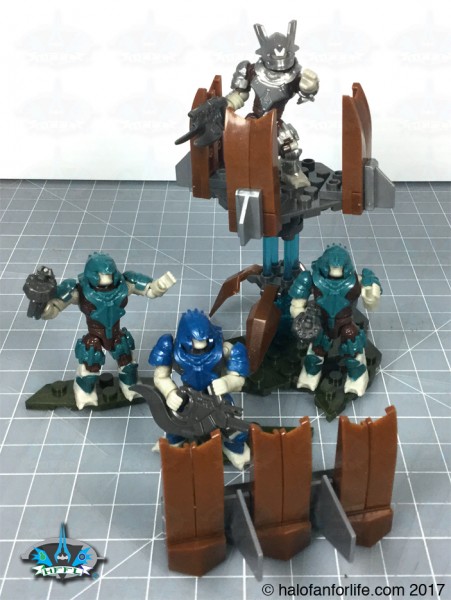 Now to go back to what I said earlier about stability of the tower. If you’ve assembled it correctly, you can easily place it on an even surface without the green baseplate and have it stand evenly. This will be my preferred method of display for this turret.

Now, you thought we were done, but no. I wanted to share an easy custom of this set.

By swapping the ruddy red parts of the Bodyguard with the dark grey parts of the Major, you get a wholly different look to both figures.

The Custom Bodyguard: I really like this version of the Bodyguard as well as the original. He looks more menacing to me this way. 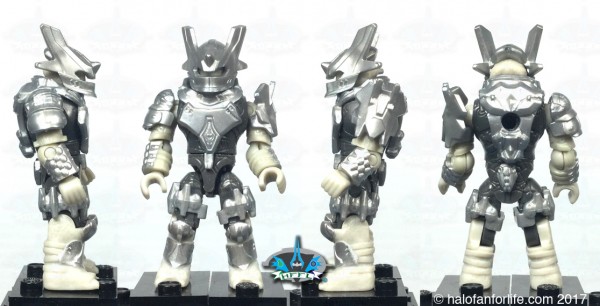 The Custom Major now has the benefit of looking more like the Minor with the same color undersuit. The only difference being that th upper arms are that ruddy red color. I think this looks good.

Summary: This set is a quick and  easy build. It can be completed in minutes. As an all army building set it’s great for those who want a lot of brutes quickly.

Why did I give it a 9.5 out of 10?
• The only small thing I’m nitpicking here is the brown color of the tower. I’m not fond of it. I’d have rther had either Covenant purple or a silver/black or silver/red tower.

That’s just a personal preference though folks. So don’t let that sway you from bying this otherwise great army building set!

Given that the set only cost $16 U.S. before tax, this set is WORTH the cost.

Now, to the fact that I paid more for this on eBay.
This set has been EXTREMELY hard to find for many collectors at retail stores (not counting online here folks). I had never seen it in stores. It’s supposed to be a 2016 set, yet here it is 2017 and many still haven’t found it yet. Not wanting to miss out on such a great army building set, I turned to eBay. (Something I HATE doing, and only do so in extreme cases, such as this.)
I paid $20 (free shipping thank goodness). Now, looking at my evaluation above, you might say that I paid more than what it’s worth. However, I’m going to contradict that here.
If you look at the example of Fireteam Osiris, that set had 4 figures and a buildable stand. Yes, it had nicely painted weapons and the figures were well painted as well. However, at it’s core it’s still just a set of 4 figures and a stand. This set, the Brute Lance, is similar in that respect.
As an army builder, being able to have a whole set of nothing but Brutes is a thumbs up from me. I found that even though I paid a little extra for this set than I normally would, I was okay with that. No buyers remorse at all. (Though that’s not a trend I want Mattel to start doing.)
If YOU see this set at retail and are on the fence about it, I say PICK IT UP! It won’t be there for long. If you find you don’t want it…well…you can sell it to your friendly neighborhood Halo blogger. (IE me)

Do I recommend it?  MOST DEFINITELY YES!! Being an all army nuilding set, if you’re into that, this is a MUST have. Even if you’re not into building armies, this is a great set to have a nice litle variety of Brutes.