Each carded figure has it’s on character on the card front. Makes it easier to identify which fiure is inside, from a distance.

Let’s take a look at each figure in Series 3. 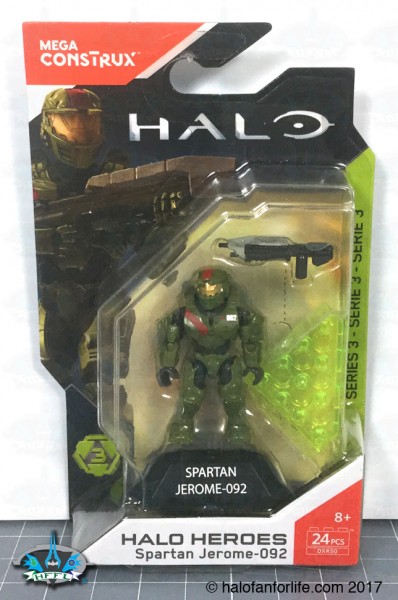 Jerome is the leader of Red team. With his release, all three members of Red team have been officially released to the public. Douglas came with the Jackrabbit, Alice with the Kodiak set.

The figure is very nice. Not a solid green, but rather the light speckling in the plastic that we’ve come to know. And again, I really like that. Makes the armor look slightly battle worn, as it should be.

The printer spartan number on the chest is very cool. I especially like the printed emblem on the shoulder! 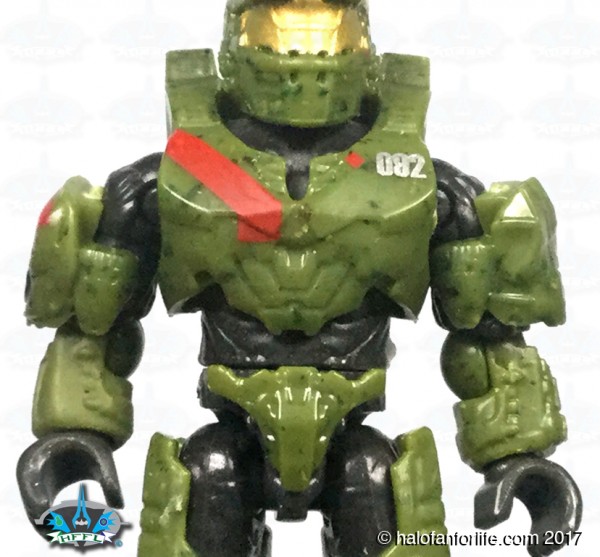 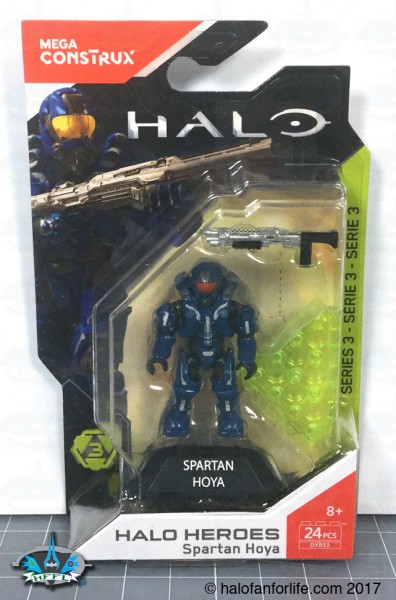 Spartan Hoya is now the third member of Majestic squad to officially be made into minifigure form. We’ve had close variants previously, but this one is specifically name.

The amount of detail that went into the paint application for Hoya is fantastic! 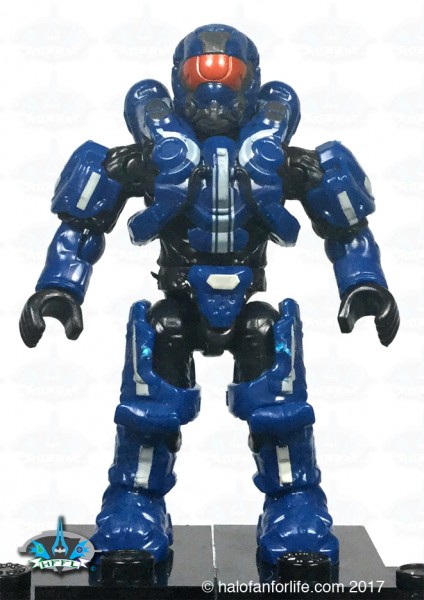 Even Majestic’s logo is printed on the shoulder! That’s one tiny logo on a tiny figure folks, yet Mega made it happen! 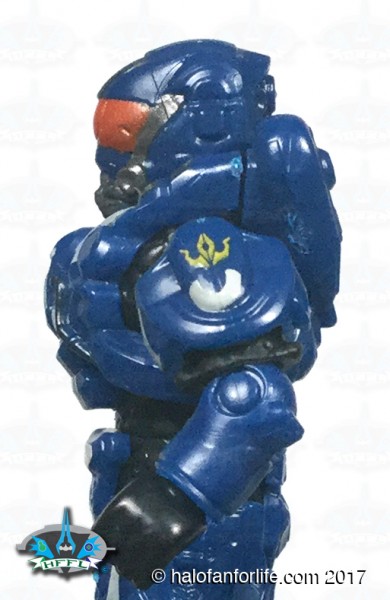 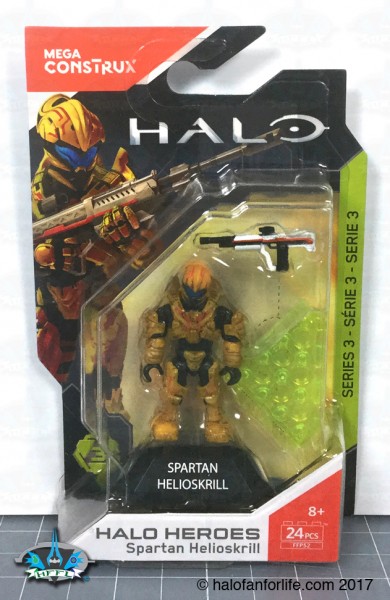 The armor is well done and the highlights are cool. However, the blackwash applied ot the figure is uneven and ends up ruining an otherwise awesome figure. I’d have rather liked either an even blackwash or no blackwash at all. When I found this, it was in a brand new case. So I was able to cherry pick the best of the four that were in there. This one as you can see has no blackwash on the top of the helmet and is missing that on parts of the calves as well. And that was the BEST one…

Here’s a close-up to show you the difference. I get that the blackwash really brings out the detail in the armor. I’m okay with that. But when it’s not applied evenly, it really makes the unwashed parts stand out and in a bad way. 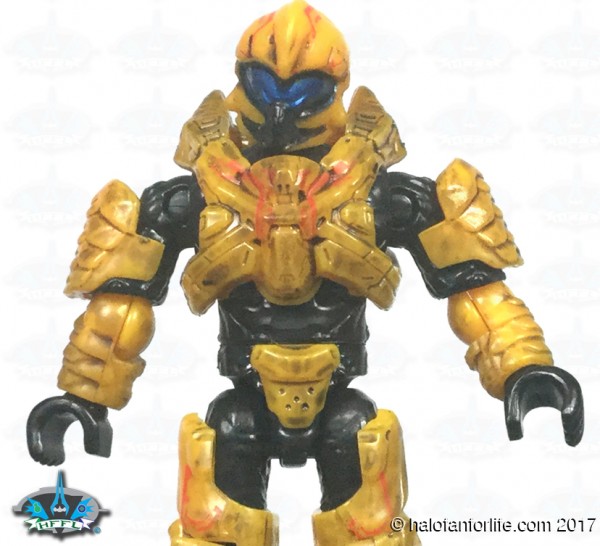 This figure gets a 7.5 of 10 medals from me. Again, the armor is great and the red striping is cool. But that blackwash really ruined this for me. I’m going to try to add blackwash to the helmet and calves to even it out. I’m just disappointed though that it’s we consumers who have to make this fix.

I want to add here, that I’ve had no less than four other friends across the U.S. and Canada who have reported the same issue with the blackwash. So this isn’t a one-off or local problem. It’s systemic with this figure. 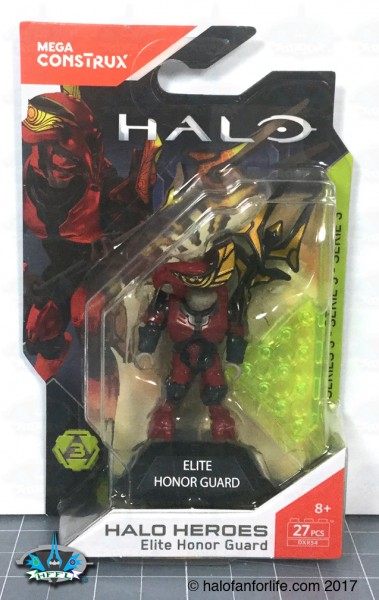 Wowzers, one of my all-time favorite figures gets an upgrade! I’m already a HUGE fan of the Honor Guard character and previously released figure. This upgraded removable armor version is even BETTER! The added height with the new leg articulation and the bulkier armor make this Honor Guard even MORE imposing that it already was!
For me, this is one of the gems in Series 3! 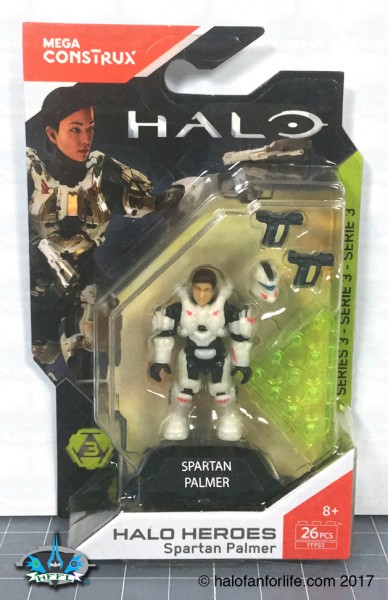 This is the third variant of Palmer, but the first to be named and with a human head.

The detail is pretty good. Though the red stripe on the shoulders are supposed to have the UNSC letter logo on them an not just be a stripe. Considering though how small the figure is, I’m cool with it. The armor is a kind of pearlescent white. SO it can appear slightly yellow under certain lighting or creamy in other lighting.
I’m happy to have this figure with the human head finally. I wish all the characters that show their heads had this with them as well. Though I do wish the head was a little better.
I’ll end up getting a second of this figure, so I can have one with and one without the helmet on.

This figure gets a 9 of 10 medals from me. The head sculpt isn’t quite right. Otherwise and great figure. 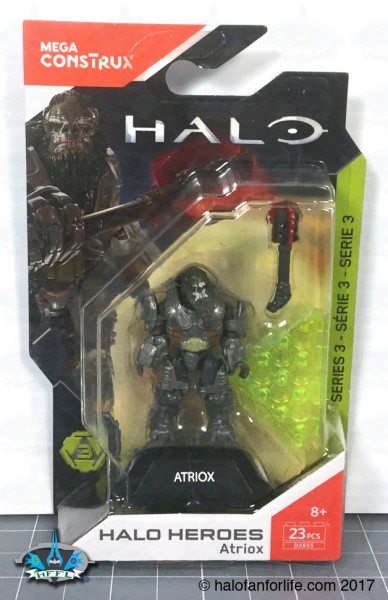 Ah, the leader of the Banished! The figure is chock FULL of detail and paint application! Be sure to open this pic in another window so you can see the larger version!
There are only two things with this figure that keep it from being a 10 for me. One is the face paint. Instead of looking fierce, he kind of looks sad.
The other and much more glaring issue is that Atriox is supposed to be HUGE! At least 2 heads higher than a Spartan. This would have been the perfect opportunity for Mega to redesign the Brutes so that they were to scale. Sadly, that’s not the case. With other Mega lines having large figures, like the Cabal from Destiny, I see no reason for the Brutes not to be made bigger now.
Well, the only factor maybe being cost per figure. They would be single packed figures anymore and would have to come in larger sets. But I’d be okay with that, if it meant correctly scaled Brutes.

Hopefully some time in the future, we’ll get a properly scaled Atriox. In the meantime, I’m working on a Custom of him!!!

As for the stands that come with each figure, below is an example of one. Every figure comes with the same parts for their own stand. The exception is the name printed on the black piece being respective to the character.

The figures in various poses.

And the figures on their respective stands. The bar that is part of the stand allows for even more dynamic poses than I’ve shown here. So don’t lmit yourself. Have FUN! 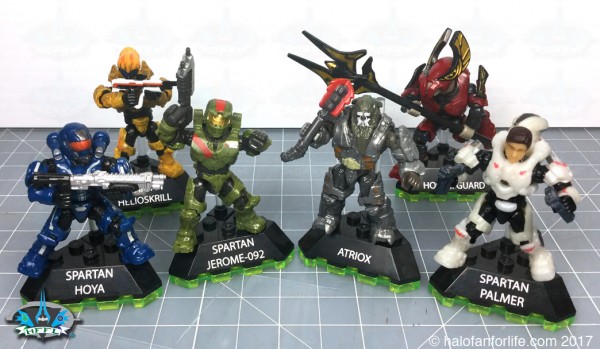 I have Palmer’s helmet resting on the stand’s bar in the pic above.

Overall Rating for Series 3: I give this set 9 out for 10 medals.

Why did I give it a 9 out of 10?
• The only issues I had were the size of Atriox and the very uneven blackwash of the Helioskrill figure. The other 4 figures were great. Even those two were good. But a bad paint job can ruin an otherwise great figure.

Do I recommend it?  YES For all but the Helioskrill due to the mishmash of the blackwash. Yes, even to Atriox, though he’s way too small. It’s still a VERY detailed figures!