Before I get started, I was unable to find the Dark Green and Copper sets at retail. So I’m relying on two pics from Mega Construx site for that part of the review.

Okay, let’s get started. Each Pod set comes with a small cardboard attachment. This to hang from hooks on store displays. Each set also has 23 pieces, regardless fo the color cryo pod set you get. There is a small plastic film that circles the pod to keep it encapsulated with the contents inside. 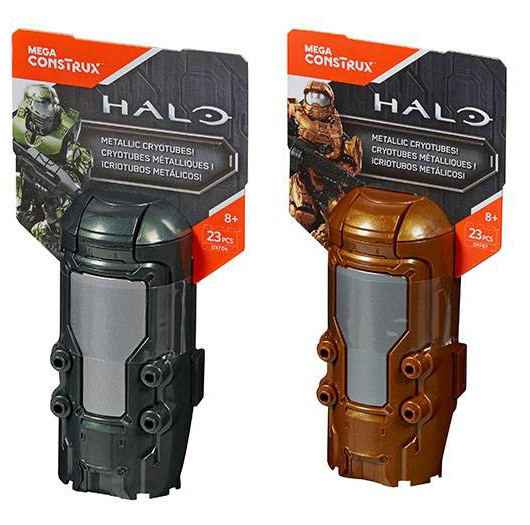 Speaking of contents, you get one platic baggies with the parts as well as a folded insert sheet. 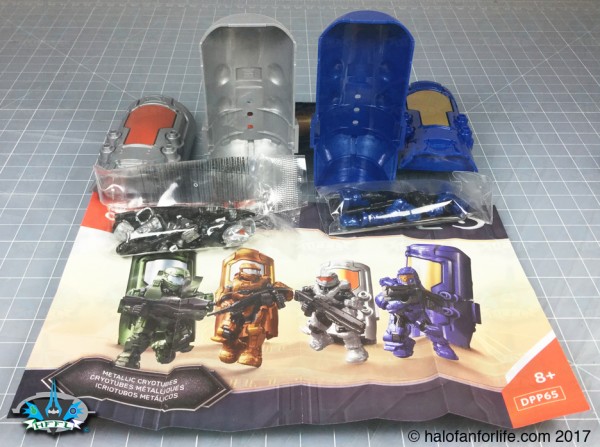 Here you see that the figures are not pre-built. As stated above, each fifgure comes with a figure stand and a weapon.

The pods themselves are designed in a way that they can attach at the bottom. Something prior pods ( in those cases, drop pods) couldn’t do. 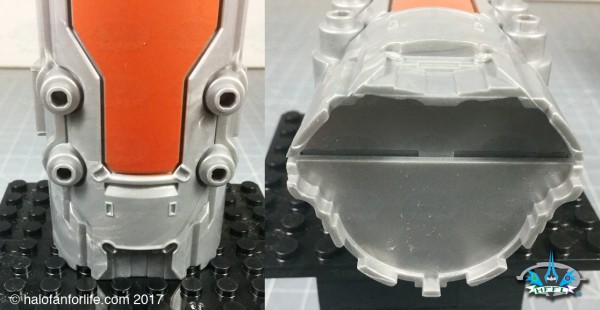 They can also attach via the back. The four studs on the front can even accomodate 1×1 plates or bloks. Better yet the small hoses that can be found in other sets. Which I think would look pretty cool. I didn’t have any handy (they are packed away, ATM), or I’d have shown that here in the review. 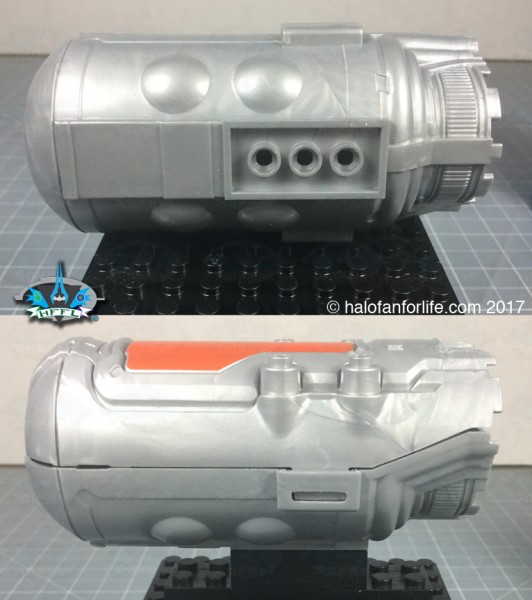 The figures are pretty standard at this point as we’ve seen the armor sets in other sets. Though the cryo pod Spartans have a distinction in that their armor color is made with metallic paint. Of the 4, I think I got the best two. I like the recruit armor and that it has a copper/orange visor. As well, the Defender looks great in blue with the gold visor.

What’s really cool is that the cry pods themselves show the same armor color as the figs inside. As well, the “glass” front is the same color as the Spartan’s visor. 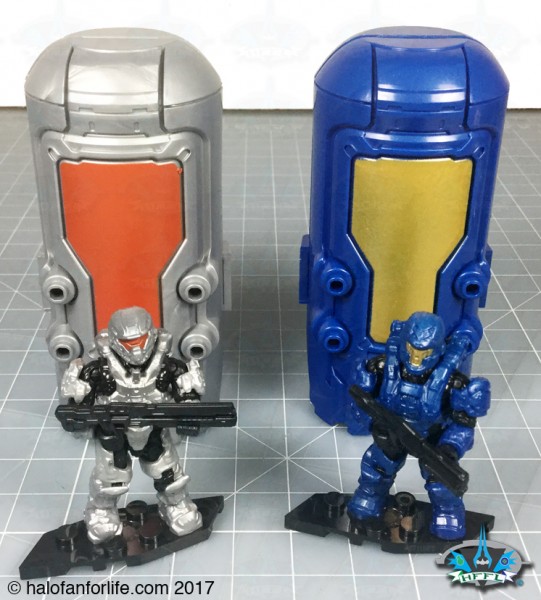 Above you see the Silver Recruit has a Railgun. The Blue Defender has a Hydra Launcher.

Below, the Dark Green Mark V has an AR, while the Copper Mark VI Gen 2 has a SAW. 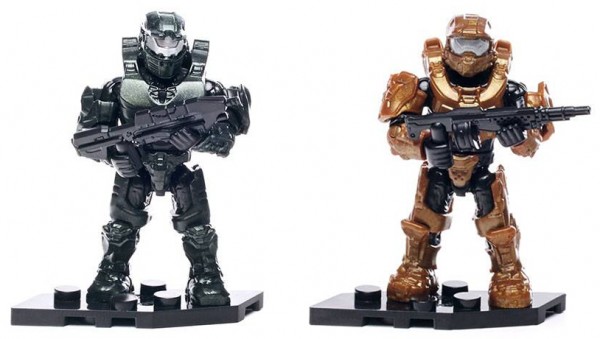 Summary: With exception to the figures, there is no build time for the sets. Each figure has a nice metallic sheen to them.

Why did I give it a 8.5 out of 10?
• The fgures are decent enough. Though when compared to the price of the blind bag figures at $3-3.50, I don’t value the metallic sheen to be worth the difference in price.
• The pod is good and I am thankful it does work with the blok pegs. Other than that though, there really isn’t much use for them.

Let me break down my opinion of the value of this set. (In US dollars)
• The figures equate to $3.50 each. This includes their weapon and figure stand.
• The cryo pod maybe another 75 cents as the plastic quality is not as good as normal bloks.
TOTAL: $4.25 (before tax and in U.S. dollars)

Given that the set cost $5 U.S. before tax, the set is an ok value. These are harder to find now as they’e been out for awhile. (I’m still bummed I never got the dark green and coppoer ones.) These pods sets did come down in value at stores and could be had for $4 or slightly less. So my estimation is on par with the sale price, not the original retail price. These can almost never be found on eBay. I haven’t seen too many others have these either. So that leads me to believe distribution of these cryo pods was pretty few and far between. Good luck finding them, if you want them. I’d expect they would now fetch a bit of a higher price, given their relative rarity.

Do I recommend it?  Maybe. Depends on if you like the armor set. I got the two I really wanted. Though I’d like to have all four of them.