Before I go further, let me say that I’ve taken to calling the mech the Gruntbuster and not Goblin. It’s a take on the Hulkbuster armor from Iron Man. Yes, it doesn’t bust Grunts. More like it’s a Grunt that is doing the busting! So if I use this word, later in the review, you know why.

The box art shows the set in a dynamic action shot. One of the better ones in recent history, IMO. 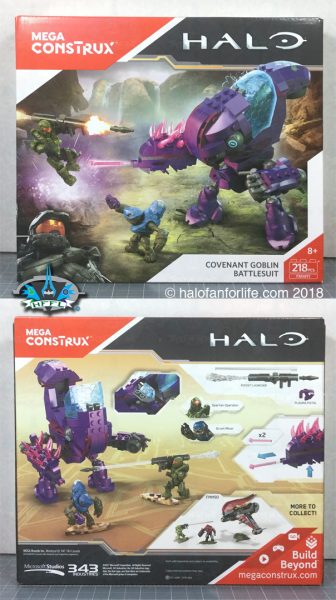 You get several bags of parts and an instruction manual. 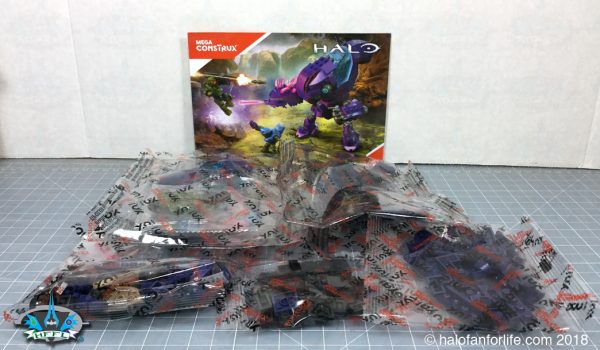 The largest bag has several more bags within it. Notably the pink needles. It also contains the cockpit glass and feet. The cockpit glass is special made for this set and has an etched hexagon pattern in it. Quite nice! The feet are fantastic! I’d love to see those used elsewhere, besides of course the other 3 versions of the Goblin. (Gruntbuster!) I can see the feet used for a different scale Hunter, for example. 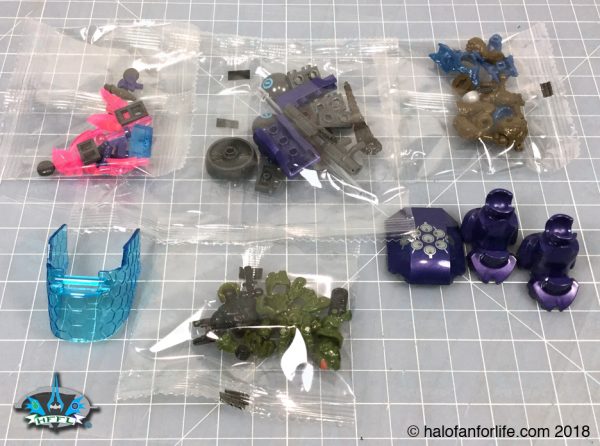 Here are the parts all sorted out.Beyond the aforementioned parts above, everything else we’ve seen before. Though some parts are in different colors and/or have printing on them. 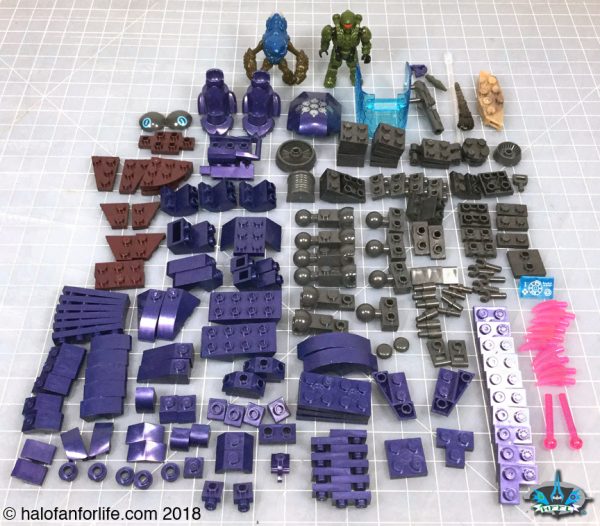 Okay, let’s get into the build!

First thing we build according to the instructions is the hip. This is the base for which we add all the other sections of the Goblin. 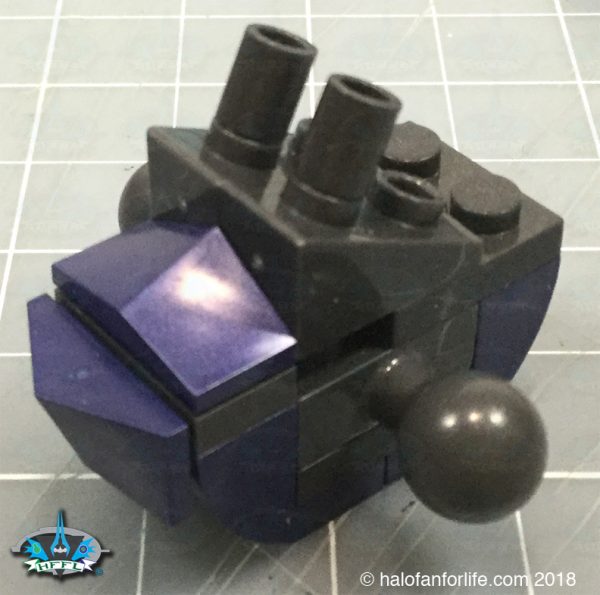 Next comes the body. Note the inset pic of the control screen in the cockpit. It has some of the same graphics from Halo Wars 2! I’m not so much a fan of the wine color pieces here. I’ll talk about that later in the review though.

This shot shows the lift turbine on the top/back of the Goblin.

Now we start to build what would be considered the head of the Goblin, though it’s really the front of the body merged together with the back half. 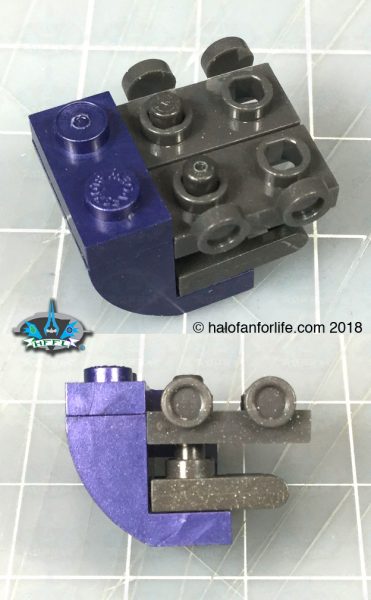 I think this section could have been done better. Not just the wine color parts but the curvature. Mega already has pieces that would have looked better here, instead of the ones they used. Hopefully, if they make the other versions of the Goblin, this can be corrected. I’ll show pics of the in-game model later in the review for you to compare to the toy. 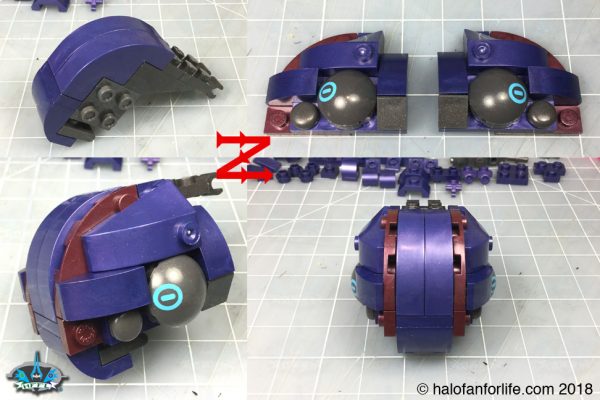 Next we clip on the “head” to the “body”. This is a 2-hinge system. One for the head itself and the other for the cockpit. 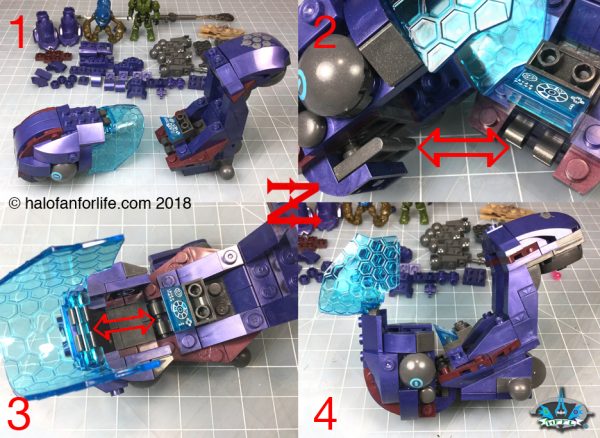 The body is complete. There is a small gap between the cockpit and the body. Doesn’t bother me though. 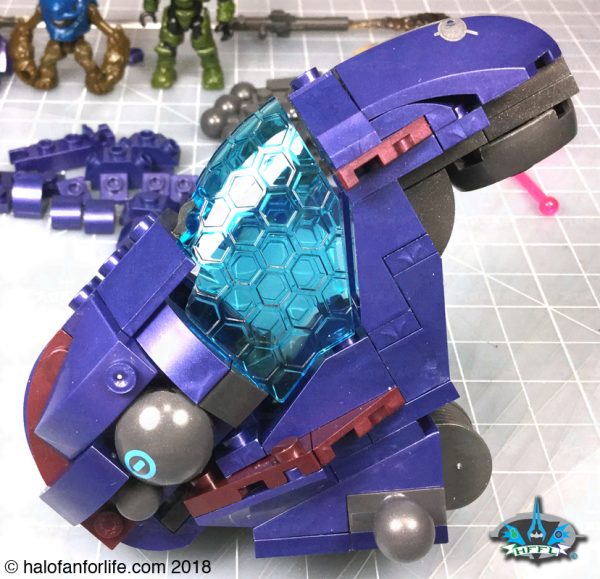 Okay, let’s put that hip to use! As you can see it uses small tubes to help secure it to the body. This makes it VERY stable!

Next we build the legs. These have hip and knee ball joints. That adds greatly to pose ability!

Next we start to build the Needler Arm! This arm also has a built in firing mechanism! 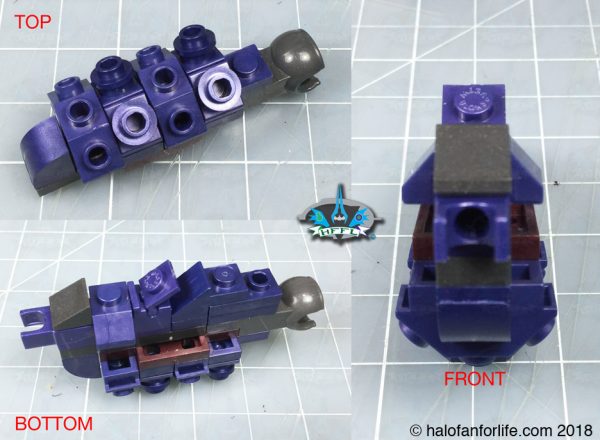 The needles themselves are partially transparent pink “tooth” pieces. I’d have rather they been straight. However, given that these are a softer plastic than normal, I’m totally fine with it. Don’t want to hurt yourself on any sharp ends. This arm has shoulder and elbow articulation. 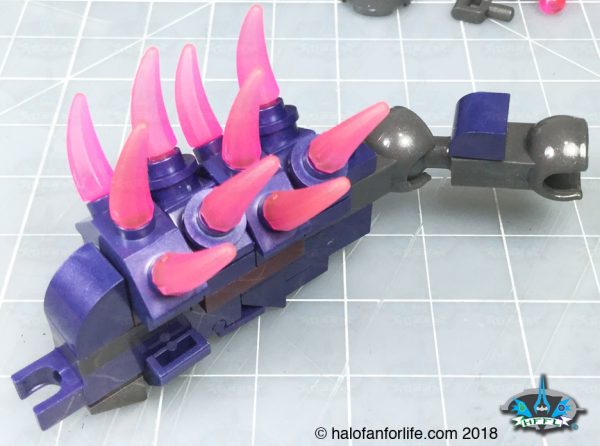 And now for the blaster arm. It has shoulder, elbow and finger articulation. I say blaster because in the palm of the hand is a blast pad. The in-game Goblin does indeed use this as a blaster! 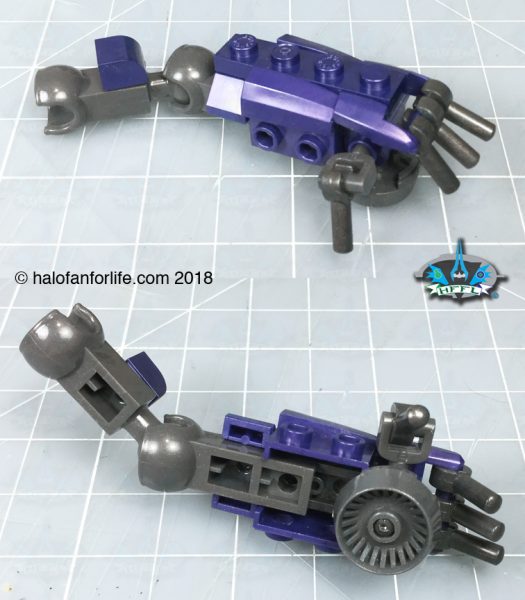 We add the arms to the Goblin (Gruntbuster) and it’s complete! It looks really cool! Just a few minor tweaks I’d make to the design. 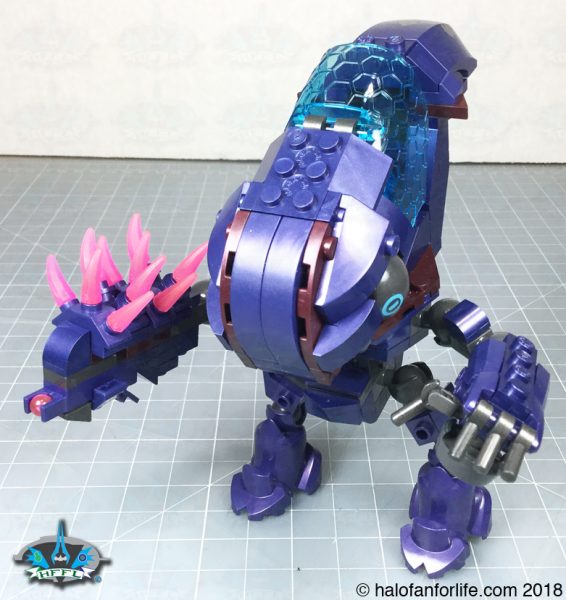 A few other views of the Goblin.

I had these pieces left over.  I’m always happy to have extra parts, especially pins! 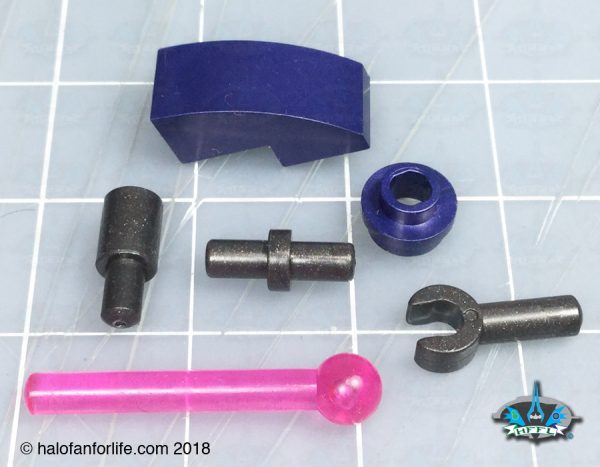 Now let’s take a look at the figures.

Grunt Minor – Appropriate Grunt for this mech. I like the color choice too.

The Grunt fits in the mech quite snugly. You may have to slightly adjust the legs and arms to get the grunt to fit. As you can see though, it WILL fit. Click on this pic to see a bigger version.

And finally, will the Goblin take down the Spartan or will it be the other way around? 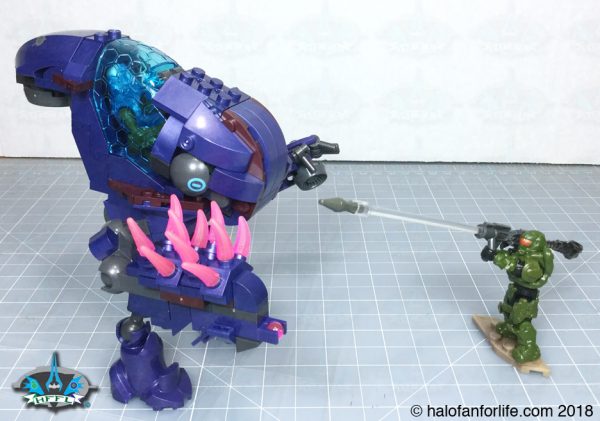 Looks like the Spartan won. But will the Grunt have his revenge? 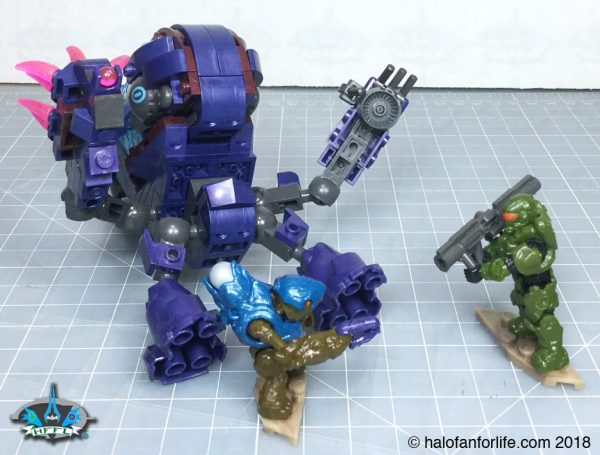 Summary: The set is a short build. I did have a little issue with sections popping off as I went along, especially the jaw of the head and the needler arm. So just take note of that. Not a major distractor though. The figure choices are good. Some details are left out. Some are harder to do as the mech is more organic in shape and we’re using bloks. Still, a  fun set!

Overall Rating: I give this set 9 out for 10 medals.

Why did I give it a 9 out of 10?
• I’m not a fan of the wine color pieces.
• The back top piece could have been made to have those studs on in, instead of the printed dots. A lost detail there.

Here are some shots from the in-game model.

So as you can see from the below pic, the lift engine should have been bulkier. That’s actually a fairly simple fix. Add a 4×4 round blok and it’s instantly bigger! 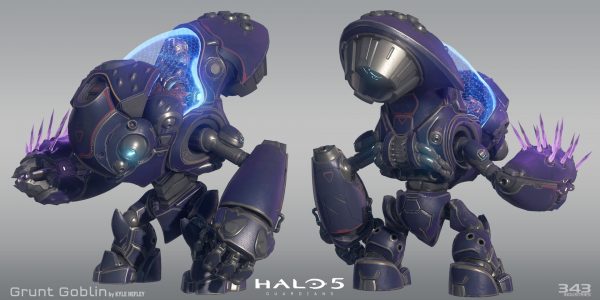 Now, I see why the wine color pieces were added. However, the blok pieces are too prominent and don’t reflect the thin pin striping well. I’d rather they just have been the same color as the body, 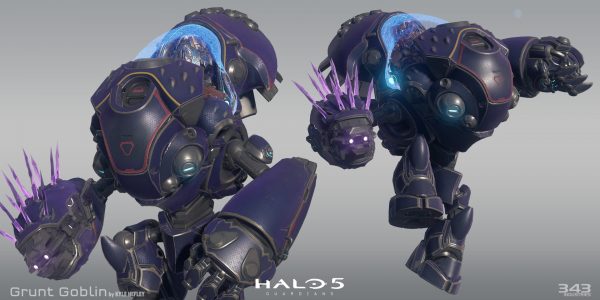 The one big missed opportunity is to have a battle damage back. Because of the way the toy is built, you can easily make this. Perhaps a future version will have this feature. 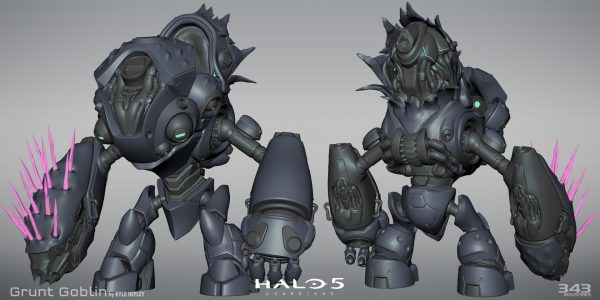 Here’s my opinion on the break down of the value of this set. (In US dollars)
• Figures with one weapon and figure stand equates to $3.50 each. Total $7
• The Grunt Goblin mech I think is worth $20 given the piece count and playability of it..
TOTAL: $27 (before tax and in U.S. dollars)

Given that the set costs $20 US before tax, this is a VERY good value!

Do I recommend it?  Most definitely! Despite a few missed or changed details, this is a STELLAR set! Good scale compared to the figure as well as the in-game model. An inexpensive set that is well worth the purchase! I may have to buy a few more, in case Mega doesn’t make the other color versions of this.

On that note about the other color versions, there are the wine, white and gold versions. Two of those have scarab blaster arms instead of the needler arm. This is a BIG reason why I want to see at least one version of the Scarab arm Goblin made!