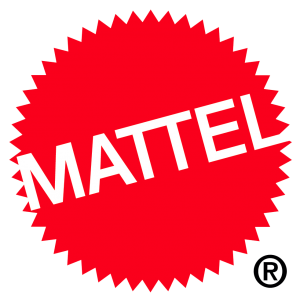 On with the pics! (Click pics to make BIGGER)

The Elite Warrior is seen through a window holding a Plasma Pistol. The Build-A-Figure Grunt Ultra torso is in plain view. This is a departure from the series previously. The build-a-figure pieces had always been obscured by graphics on the front of the box.
The armor is removable, though for the Elite, all the armor is on the figure instead of the usual partial armor off seen through the window of other figures in this series.
The back shows all of the contents, as well as the other figures in Series 2. It also shows the corresponding parts for the Build-A-Figure Grunt.

NOTE: There were two other figures shown to be in this wave in previously released press materials. A Red Spartan Achilles and an Orange Spartan Mark VI.

Along with these, there were yet two MORE figures shown in earlier press releases, however, the quality of the picture is low. Below is the best quality I’ve been able to find thus far. A Promethean with a Binary Rifle and a Spartan EOD.

Again, apologies for the small pic there. It’s the best I could get…so far.

ADDENDUM 11/30/18! I now have a better pic of the Black and Orange Spartan seen above. It’s an EOD, not a Recruit as I had mistakingly posted before. Plus, it comes with an extra CQB helmet!

As well, I can now CONFIRM the EOD/CQB, Achilles and Orange Spartan Mark VI are being released! No official word yet on if the Promethean Warrior shown in the tiny pic will be released.
/Addendum 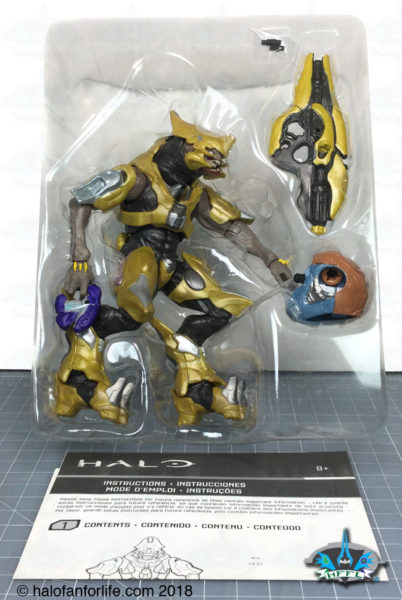 As with the other Spartan figures from Mattel’s 6 inch line, all armor is removable! Instead of showing the figure’s armor parts removed as I have done previously, I’ve elected to show the instruction sheet instead. 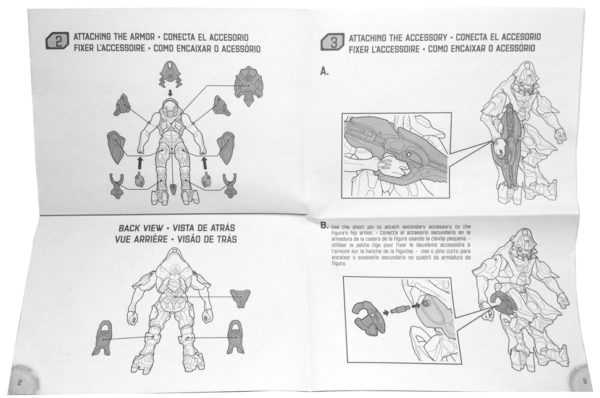 The articulation of the Elite Warrior is excellent. You can put the figure into a LOT poses. You’ll see some more of those later in the article. 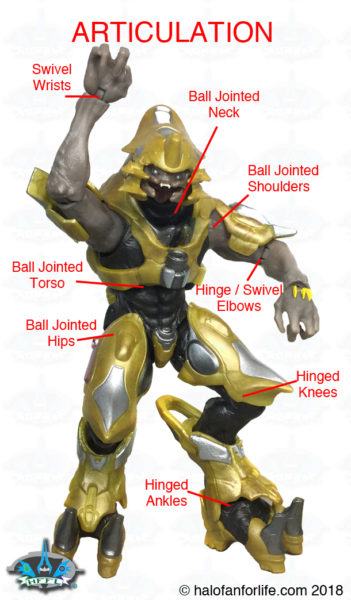 Each figure from series 2 includes a Build-a-Figure piece of the Grunt Ultra. The Elite Warrior, comes with the Torso piece. The black pin you see coming out is for the head to attach to. When I get all of the parts to the Ultra Grunt, I’ll have a separate review for it.

Accessories
There are two plastic pins (as seen in the small plastic bag below). The smaller pin can be used to secure the Plasma Pistol onto the Elite’s thigh. The larger pin can’t really be used for the Elite as there is no hole in the back for it to insert to. SO you have an extra pin this time. Bonus! LOL. The Fuel Rod Gun is the new Halo 5 design. More sleek than it’s predecessors. Though I miss the green fuel cells protruding out from the top of the weapon. The Plasma Pistol is well done and has some decent detailing/paint application to it. 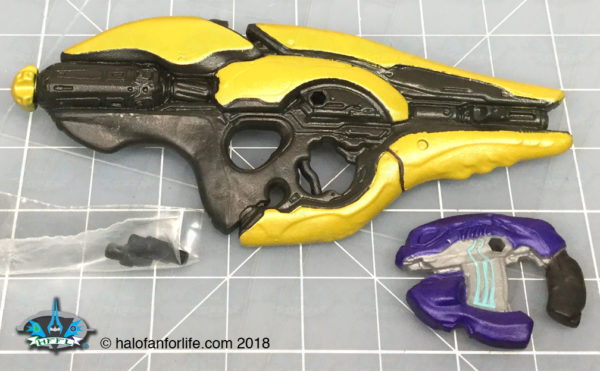 The Elite Warrior in orthogonal views. There is a LOT of detail going on here folks! From the sculpt of the armor to paint applications on it. Angles and smooth curves everywhere! Absolutely click on this pic to see a larger size of it for all of the detail!

The pic below shows (on left), the hole for attachment on the thigh, while at right, the Plasma Pistol attached. 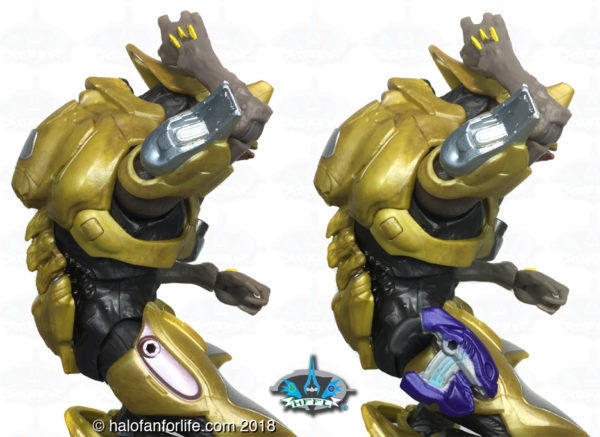 The Plasma Pistol is easily held by Elite Warrior’s right hand. This does take a little effort though as the fingers of the Elite’s a longer and in a more bent position than the Spartan figures. So be extra careful here.

As with the Plasma Pistol, the Elite can hold the Fuel Rod Gun too. Again, take caution when bending and wrapping the figure’s fingers around the gun holes to secure the weapon to the hand.

Evaluation
Sculpt: Superb 10 of 10 medals!
Articulation: This figure has articulation that now fairly standard for Mattel Halo figures. Though it’s missing two points that other figures have. 9 out of 10 medals
Paint Application: Gold with Silver highlights and a little bit of metallic wine color details literally make the armor shine! Very well done. 10 of 10 medals
Accessories: The figure set includes a Fuel Rod Gun and a Plasma Pistol. 10 out of 10 medals
Playability: Lots of posing possibilities. What you’ve seen in the article is only a very small sampling of poses this figure can accomplish. 9 of 10 medals
Overall: 48 medals out of a total 50 medals.

Do I recommend this product? Most Definitely! With a little extra detailing this figure could EASILY be Parg Vol from Halo 4’s Spartan ops series. 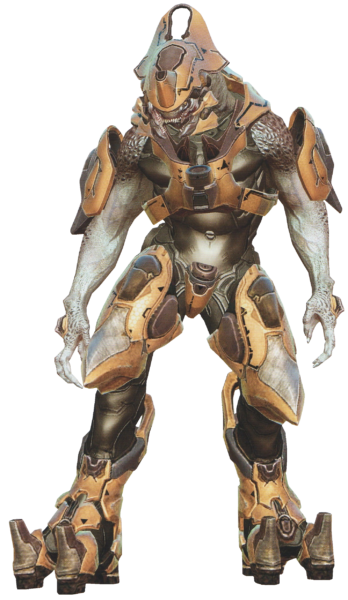 If you have any questions about this figure that I didn’t cover in the review, please do not hesitate to ask me. Either reply below or e-mail me at sal@halofanforlife.com