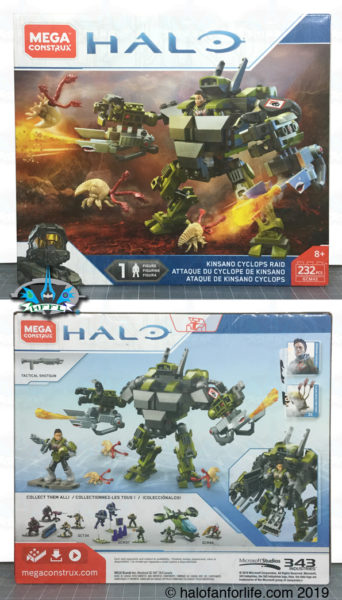 A close up of sets on the back of the box reveal two figure sets and a brand new Hornet! As soon as I have more and better pics of those sets, I’ll be previewing them here on the blog.

You get a booklet of instructions and five bags of parts. The bags are not number, as some other recent sets have been. With only 232 pieces though, that’s perfectly okay, IMO. 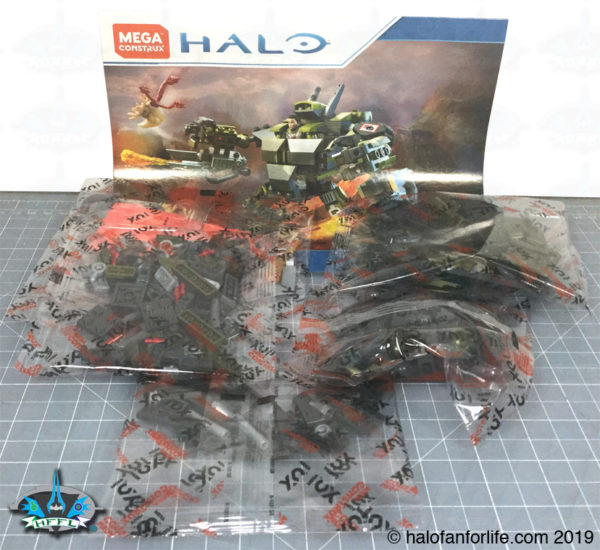 Here are all the pieces sorted out, along with Kinsano put together. The green pieces here are a nice shiny metallic green with NO camouflage. I’m actually happy about that. 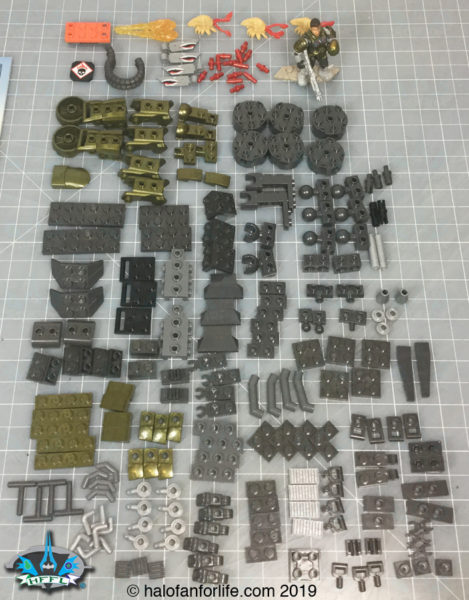 There are some pieces of note in the set. The top half of the graphic below shows what I believe to be unique pieces not yet offered before. Though I may be incorrect on the double bent pipe. The bottom half shows the printed pieces in the set. There are two sets of the shark nose pointy bits. More importantly, NO stickers! YEAH!!! 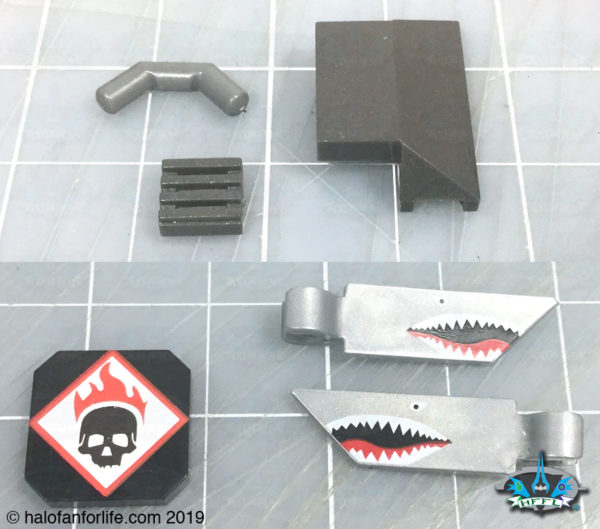 Mega has started including specialty parts in their sets with varying uses. In this set you get a 2-piece clip, as seen below. Good for holding your instruction booklet pages in place while building…

There is a NEW Flood in town and his name is Squishy! Seriously though, the infection form is a very rubbery piece, as is it’s tendrils. As you can the tendrils are removable! 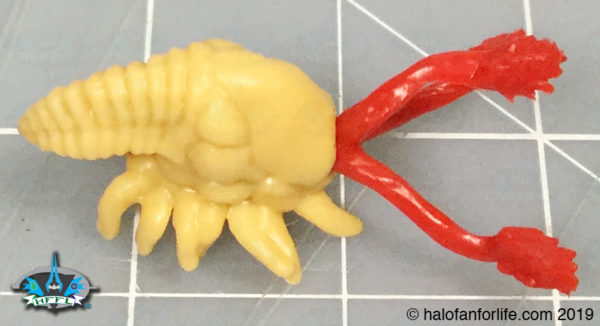 Here we see that Kinsano brings a FEMALE Marine Torso! This is the first of it’s kind in the Halo Mega line! 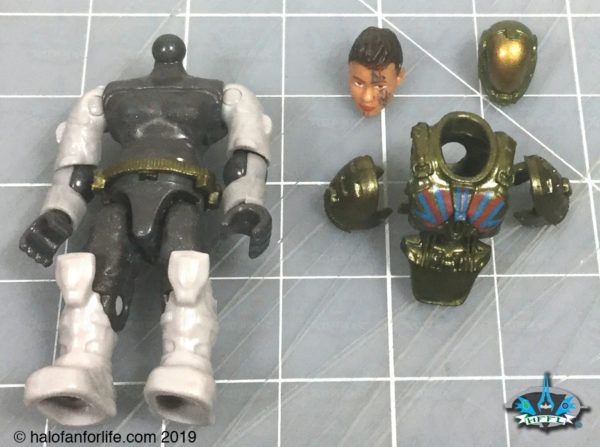 She comes with a helmet as well that you can swap out with her human head. I especially like the detail of the tattoo and blue/red stripping on her armor. 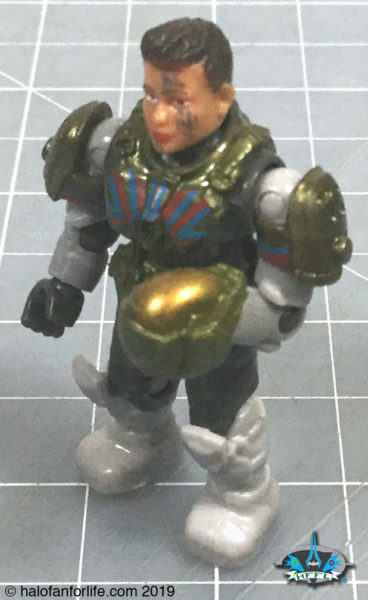 Okay, let’s get on with the build, shall we?
Before I get too far in though, let me say this is an ALL NEW Cyclops build. There is no torso harness in this build as there has been with all the other recent cyclops sets. Nope, Kinsano’s mech is all built and I love it for that!

Below we start with building the body of the cyclops. First the top half, then the bottom. No issue here with the build.
Of note, there is a peg sticking out, of which you attach Kinsano to, when the mech is complete. It works very well. You’ll see this later in the review. 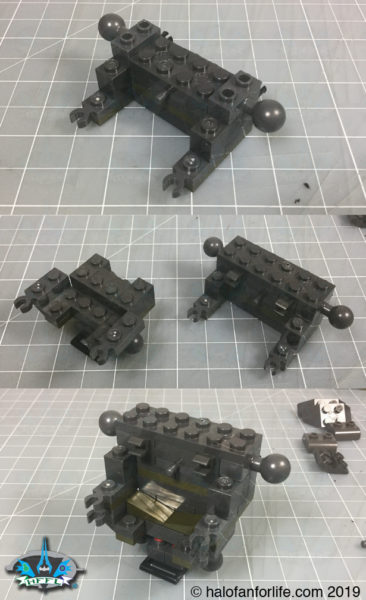 Further along in the build, we place these fin parts on the “head”. Note how they do not go on in a traditional manner, but rather at a 45° angle instead. 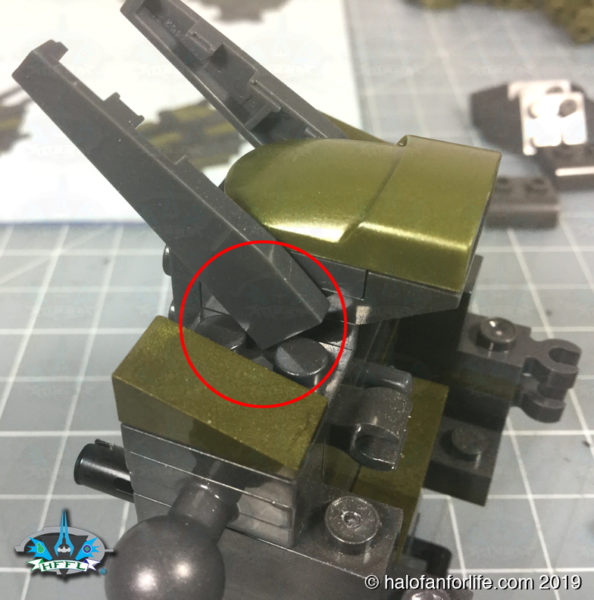 Hinges are added to the torso that allow for Kinsano or any other standard size Mega figure to be placed within. 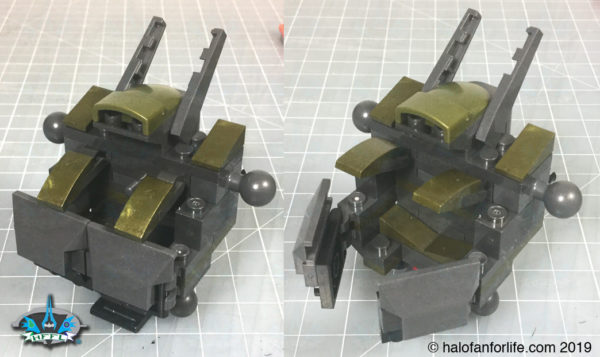 The legs are built exactly the same with one very tiny exception. That of the heel piece which is inverted from itself on the other leg. 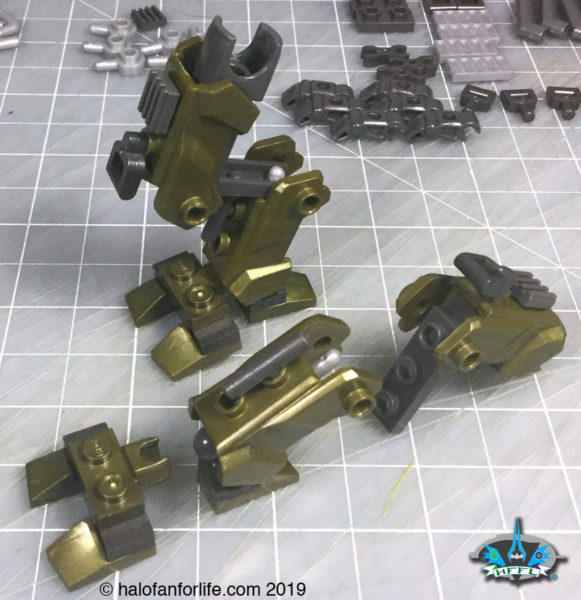 I need to make a special note here. Be absolutely certain you get a TIGHT seal of the parts I’ve circled below. Otherwise, you won’t be able to connect the thigh section to the shin. 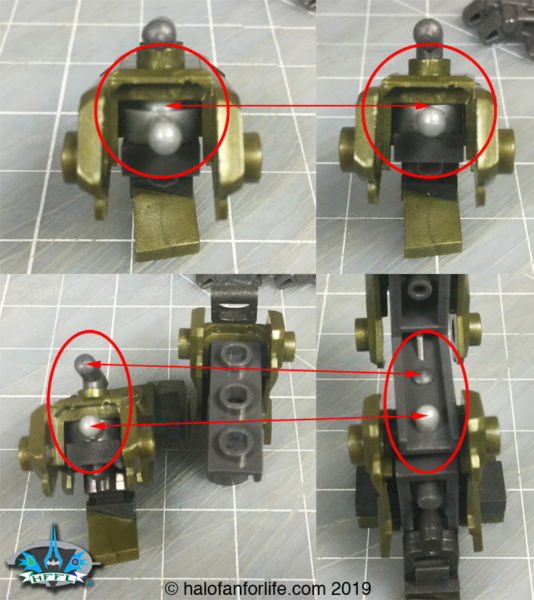 When done correctly, you see the complete assembly, bottom right of the pic above.

The leg has some limited articulation, that when fully assembled allows for a decent little bit of articulation. Figure “A” shows a little side to side movement near the calf. Figure “B” shows that the heel can rotate at the attachment point to the leg, as well as pivot at the base. Figure “C” shows a ball joint for the forward facing toes.
Another special note. The heel piece has a tendency to pop off, so be careful there.

The torso is complete. To the right shows various hinges. Shoulder, chest and cod piece hinges allow for easy access to the pilot area. 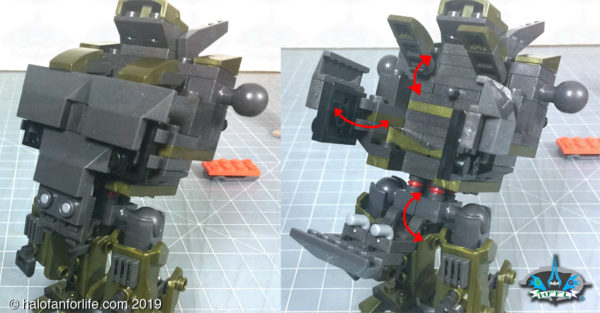 The arms have a LOT of detail. They are made of three main sections. Forearm, upper arm and flamethrower assembly. The flamethrower portion is the exact same on both arms. The only difference between the arms themselves is the added printed piece on the left shoulder. There are some really good connection points in the arm, allowing for a solid fit.

Next, two very large gas tanks are assembled and attached to the back. They attach by a pin to the back and allow for a small bit of movement. This is why they appear to bow outward at the top. It’s designed to be like that.

Here we see Kinsano in place. Not that the light grey “L” shaped pins near the bottom of the pic attach to the under side of the feet. This makes Kinsano even more snugly fit, than with just the pin in the back. 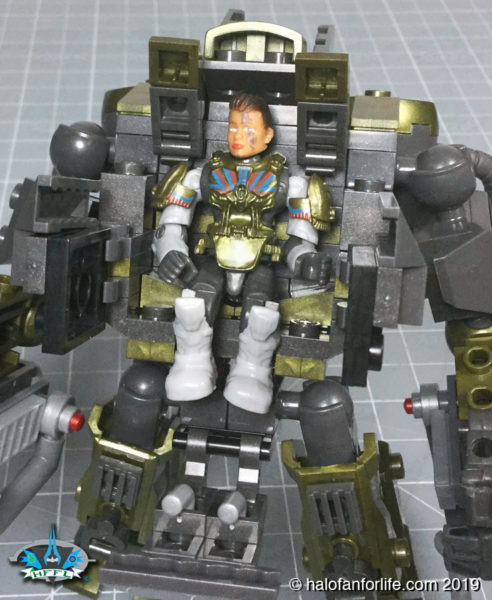 Here’s the completed cyclops with attached (included) flames, bursting out! 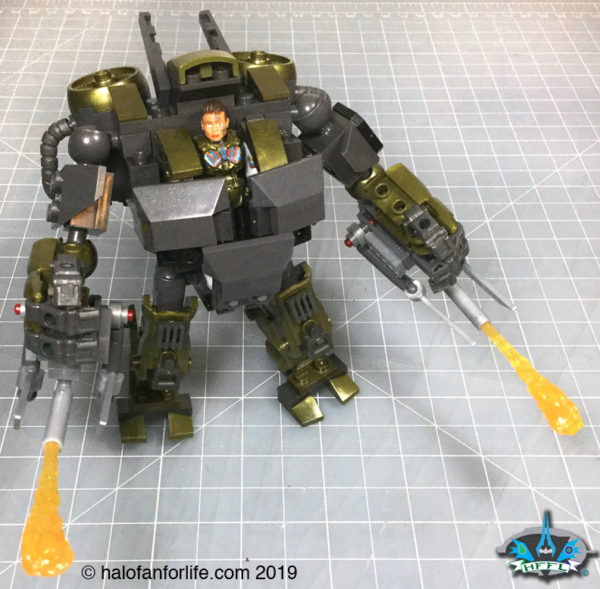 The cyclops includes the following articulation:
• Ball joint shoulders
• Ball joint elbows
• Finger articulation at the knuckles
• Ball joint hips
• Limited knee articulation
• Heel pivots and can be moved side to side
As well, hinges on the torso and various points on the flamethrower assembly can be repositioned with ease.

These were extra parts that were included. I’m happy with that as there are some great connection pieces there. Into the parts bin with them!

Below are the orthogonal views of both the cyclops and Kinsano. Be sure to click on the pics if you want to see them in higher resolution.

Kinsano with her helmet on, instead of the human head. 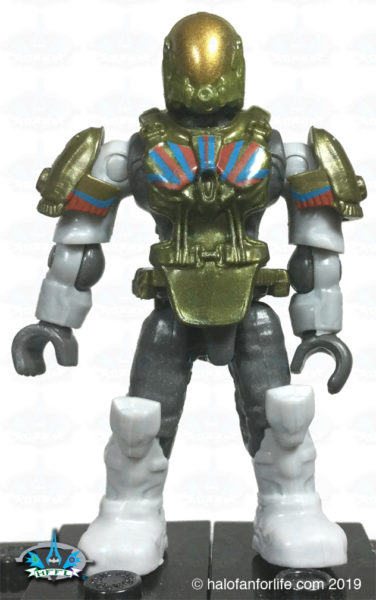 And the full set, with Kinsano out of her cyclops and the three included flood infection forms attacking. I think she’s got this covered, don’t you?! 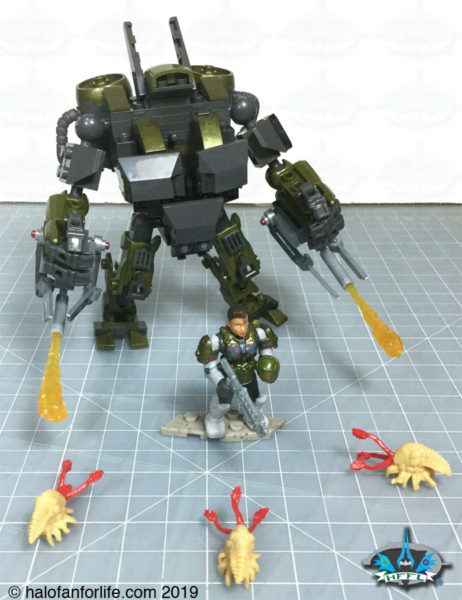 Lastly, with a couple of those extra pieces included, I used them to attach the helmet to the back of the mech. Her shotgun fits nicely into a piece already in the back that has holes in it. Great way to store the parts with the set they came with! 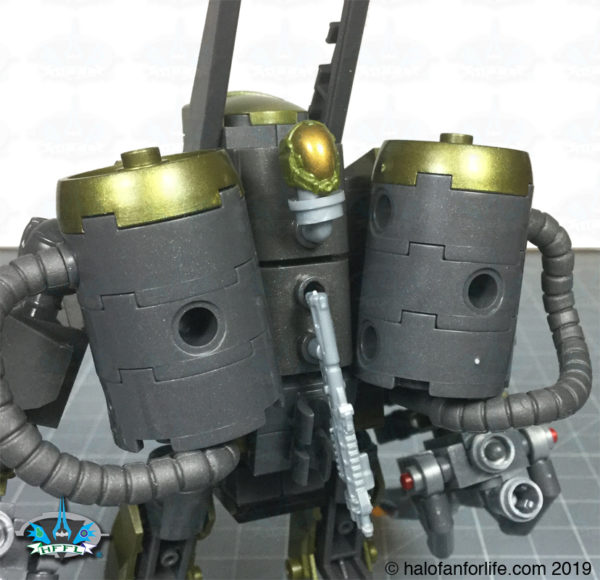 Summary: The set is short build and can easily be completed from start to finish, in one hour. Lots of good building technique make for some solid design. Do watch out for the heel piece as it has a habit of popping off. The figure is very well done and gives us the first ever female marine torso mold. New spongy infection forms are fun!

Overall Rating: I give this set 9 out for 10 medals.
Why did I give it a 9 out of 10?
• The only sticking point is the heel that keeps coming off. Half point off.
• No true knee articulation holds back from poses that would have made the set that much better. Half point off

This is a stellar set though folks, so don’t allow those two little mentions hold you back from getting the set. I bring them up, so you’re prepared for them otherwise.

Here’s my opinion on the break down of the value of this set. (In US dollars)
• As a named figure, Kinsano already commands a slightly higher than average value. Normally figures are $3.50 each. I consider her worth $5. Not just being named, but that she has nicely detailed painted armor as well as both a human head and helmet.
• The Flood Infection forms are worth 75 cents each (including their respective tendrils), for a total of $2.25.
• This leaves $12.75 left for the cyclops. I’d say it’s worth MORE than that. In fact, i’d say it’s $20 itself.
TOTAL: $27.25 (before tax and in U.S. dollars)

Given that the set costs $20 US before tax, this set is a EXCELLENT value!

Do I recommend it?  YES!! A named figures from Halo Wars 2, Kinsano comes with the first ever female marine torso mold. New infection forms! A brand new style of cyclops with loads of articulation and a cockpit that forms around the figure nicely with lots of hinges really makes this set stand out!