This is a repost from HaloWaypoint:

After a mild start to winter here in Western Washington, “Snowpocalypse 2019” decided to show up and really bring that MCC winter-themed background to life! Scoops tweeted out one of our Warthogs stuck in the snow in front of the studio last week, asking people to take a stab at recreating the in-game menu on their own. Wanting to show off his artistic side, community member Vosico took to the challenge and made the following! 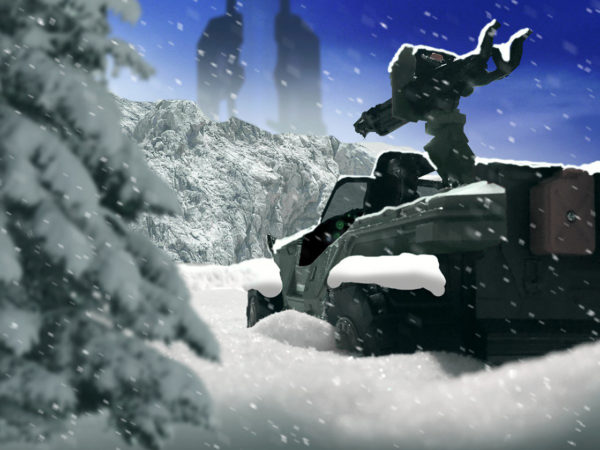 The February update for MCC is bringing some fun additions that many of you have been asking us about for quite some time. This update touches on nearly all areas of the Halo community from casual, to just for fun, all the way up to die-hard competitive.

As part of today’s update, we’ve added a special Valentine’s Day nameplate along with an IP Masking option to hide your IP from those who are not your friends. On the playlist front, we’re adding Multi-Team into Social Matchmaking and a new Microsoft Store 2v2 Series playlist so that you can get some practice in before competing at your local Microsoft Stores. As always, deep in the code there are also a series of bug fixes and some behind the scenes ground work for future playlist updates and content. But before we get into all those tidbits, let’s dive right in and talk about the overhaul that has been done to Social Games and Multi-Team, which includes what’s easily one of the most fun game types ever made! 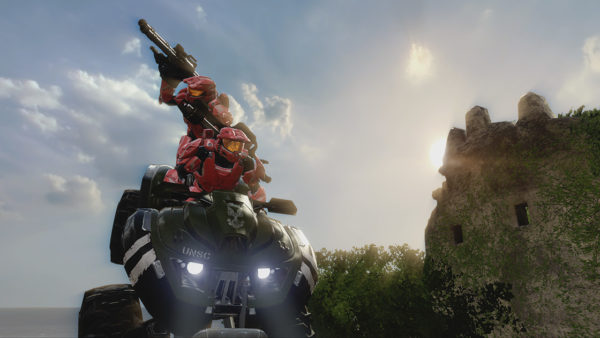 Yes – Rocket Race is back! This explosively-fun mode will live in Social Matchmaking within the Multi-Team playlist. However, before we start launching ourselves across the universe on our Mongooses (or Mongeese, whichever you prefer), let’s take a closer look at all of the changes to our social offerings.

Late last year the new Match Composer was added into MCC, allowing players to customize their own matchmaking experiences. Since its launch, we have been listening to feedback around what areas players wanted to see changed. After parsing through several months of feedback, we are happy to now bring you an updated Social Games experience, which we hope addresses much of the feedback we’ve received. 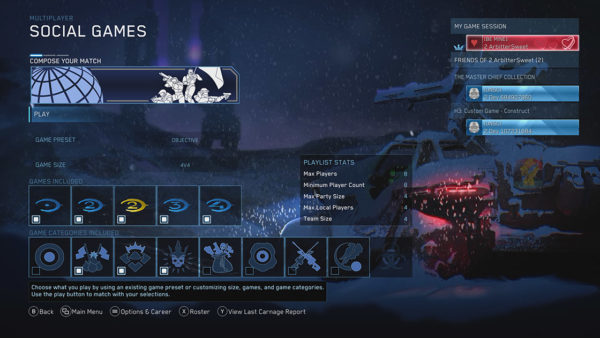 The biggest change with this update is a more logical grouping of gametypes based on behavior data, similarity, and player requests. Several of the new additions help account for gametypes people have requested for the Match Composer. We have also heard the want for FFA to come to Match Composer, and although it is not in this update, the team is looking at ways to fill that void for players in the future.

Here are the new groups that have been added to Social Games with the February update:

To help visualize everything currently available within the Match Composer, we’ve provided a full breakdown below. This details all possible options for the various team sizes and which game type selections are applicable in each game. 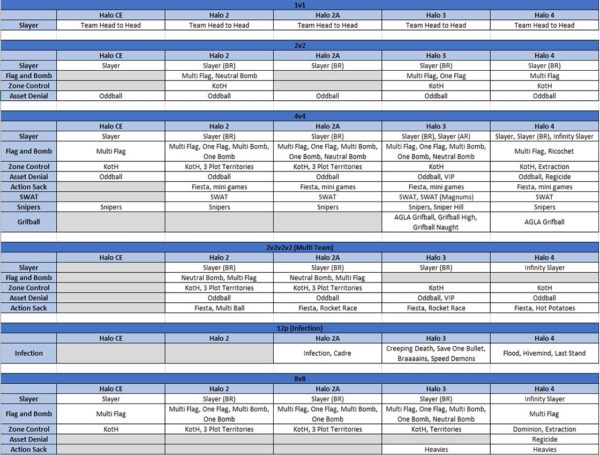 For many, games are best played with a friend. Thinking back to my youth, there were hundreds of late-nights spent stuffed into a friend’s garage with 15 other people playing on four CRTs with four Xboxes, battling to see who was number one. Since Halo has always been best played with friends, the team has put together a beautiful and loving all-new Valentine’s Day Nameplate that friends can earn by playing together. 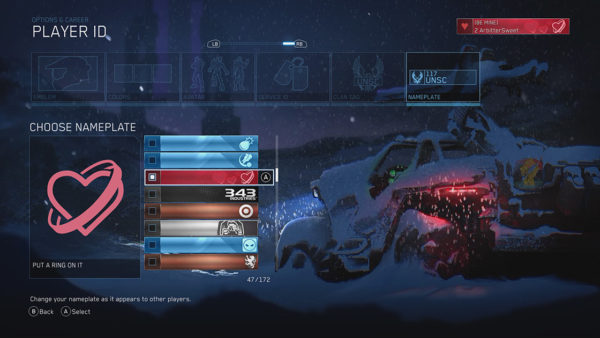 Starting today, you will be able to hop online and work towards earning this nameplate. There are two ways to acquire it – one in Multiplayer and one in Campaign. If you prefer Multiplayer, you can play and complete ten games of Multi-Team in Social Games to earn it. As a note, quitting out of a match will disqualify that game from being counted so make sure you are completing at least ten games. If Campaign is where your heart lies, you and a friend can play through three unique co-op Campaign missions to earn it. The Campaign missions that are excluded are cinematic only missions, Spartan Ops missions, and Halo 3: ODST’s Mombasa Streets.

The team is planning to grant out these nameplates a few different times but be sure to play your Multi-Team or co-op Campaign games before the end of the month to be eligible. The first series of grants are targeted for February 14th with one or two follow-up grants later in the month, and a final grant on March 1st. Best of luck Spartans!

Over the past several months, we have worked with the community to remove individuals whom are toxic and like to ruin the experience for others. The 343 Pub team recognized that it wasn’t enough just to monitor and ban players who are using nefarious tools to harm other players experiences. So, with this update we are bringing a new feature that will give you the option to hide your IP from players during matchmaking.

Prior to this update, your IP was exposed to anyone in a matchmade game as all voice communication is transmitted over peer-to-peer connections. With the February update, the team has provided a new option to ensure those peer connections are proxied through relays, which will effectively “mask” your direct IP and prevent sharing with individuals you may not trust.

If you have turned on Relay servers and are playing matchmade games, your voice communications in game will be sent via the relay servers and will no longer be exposed to others in the game. Please note that matchmade games make use of dedicated servers while other ways of playing with people (i.e. Custom Games) use Peer-to-Peer networking and still may result in your IP being shared with other players.

Who and where can players discover your IP in MCC?

Where do I need to go to turn the Relays on or off? 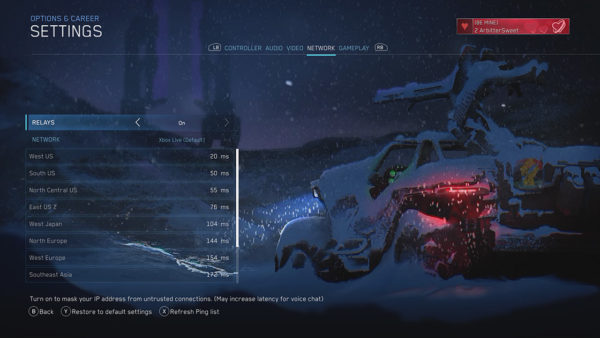 With this update we are bringing the official settings for the Microsoft Store 2v2 Community Series online in a new playlist. This will help people get some game time in, playing the settings found in store competitions across the globe. If you want to find out where and when a tournament is happening near you, head on over to tore/locations/events-for-gamers”>aka.ms/HaloMCC..

Below is a complete list of the bug fixes that are included in today’s update:

As many know, there is some fun competitive Halo action coming next month as part of the HCS Invitational at SXSW that will feature MCC in some new and fun ways. In addition, the team has work underway to deliver more improvements and features in future updates. For a while, the team has been working on bringing fan favorite Forge maps into MCC from the original games, and we’re happy to report that the many hours of investigation and work around this is starting to pay off! While the timing isn’t nailed down yet, we are excited to bring a handful of those original maps into MCC for you to play on. Below are a couple of blurry screenshots because teasing content is always fun!

Can you guess which two maps these are? 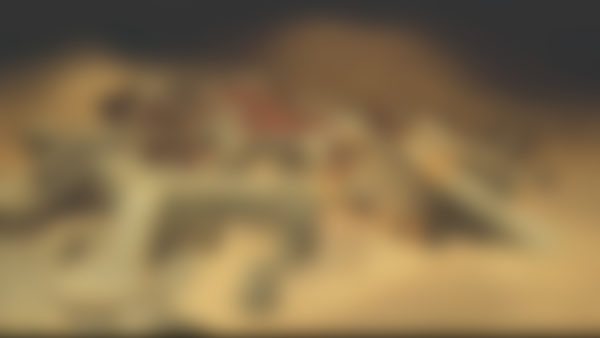 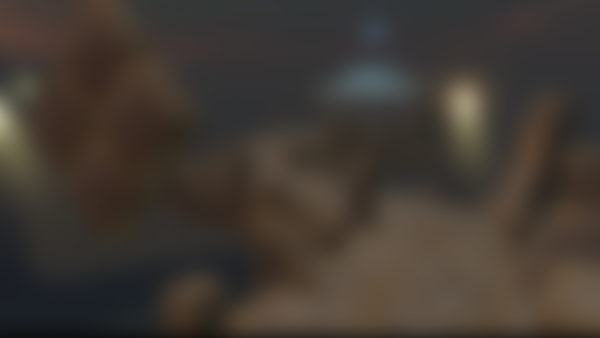 The team is also still hard at work with the Custom Game Browser that was announced last year. We look forward to sharing more details (and eventual hands-on flighting) once we get it all wrapped up and ready to go in the months to come. We are looking forward to to sharing this feature with everyone once it is good to go.

Lastly, as you’ve now noticed, today’s blog update is missing our regular fan-favorite section, “The Scoop.” Rest assured that Sean is still working hard behind the scenes and under the hood to keep #fixinmcc and will be back with another engineering deep dive in the not too distant future.

Thank you for your continued support of MCC and please, keep the feedback coming. We’ll see you online!