As with each Halo Heroes Series before, there are 6 figures in this series.

Each set comes a figure stand the same as below. The exception is the corresponding character name. 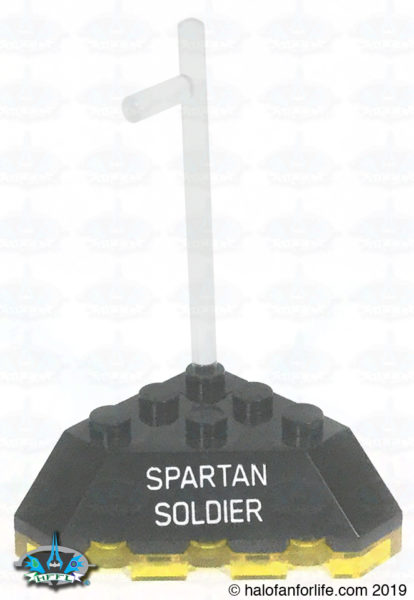 There is an insert sheet with each figure. It’s the same for all, no specific printing for certain characters. 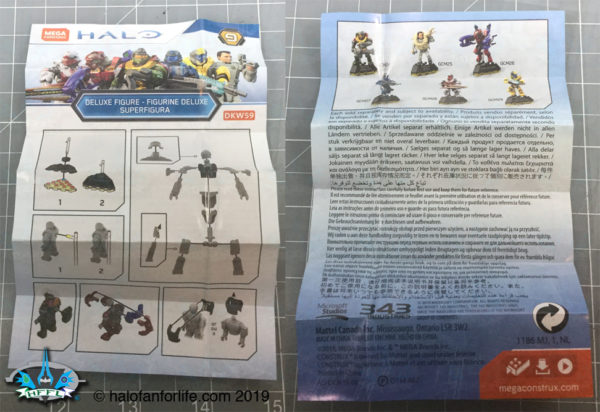 Now let’s take a look at the figures!

Spartan War Master (“Scipio” skin) – I LOVE this figure! Okay, yes, I’m bias due to the color choice being that of my favorite sports teams. Still, the actual Scipio skin is awesome. I like the dotted triangles on the armor. War Master happens to be one of my favorite Armors in all of Halo 5. 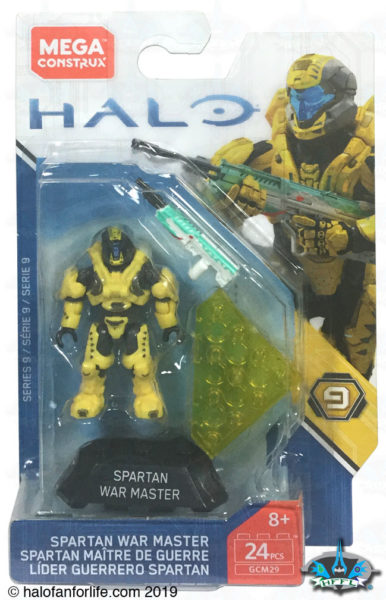 I hadn’t realized there was further detail on the back until I opened up the packaging to see it there.

The included weapon is a DMR with no scope.

This one has the “Monstrous” skin applied to it, seen below. 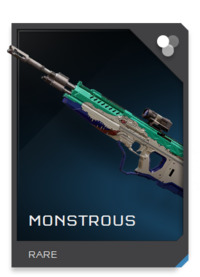 The translucent post included with the stand has an arm that juts out to allow for you to attach to your figure so you can put them in dynamic poses. 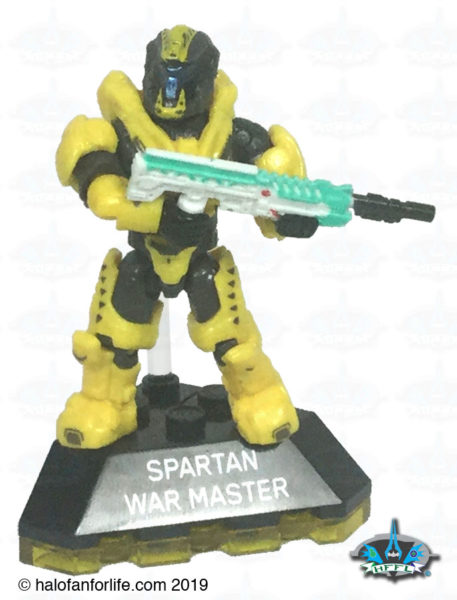 Jorge – My man, Jorge! He’s my favorite of Noble team from Reach. I was So stoked to hear he’d be in this series. The card just looks fantastic with Jorge on it. 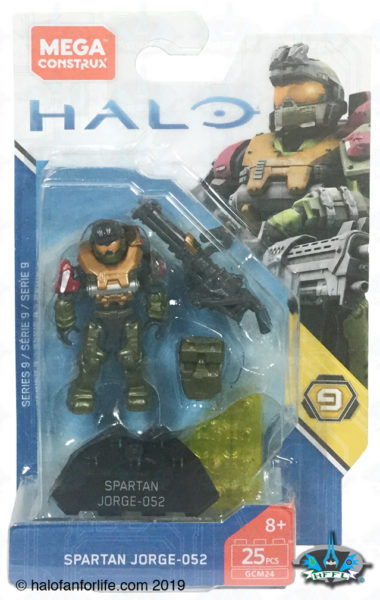 Below, I added one more panel to the typical orthogonal views I include in these reviews. The furthest right shows the backpack attached to Jorge. Lots of detail with this figure. A proper color treatment.

Man, I just love how he looks holding the turret!  Note that the corner piece of the stand has a sideways hole. This allows for you to put the stand on the side, if you so choose. 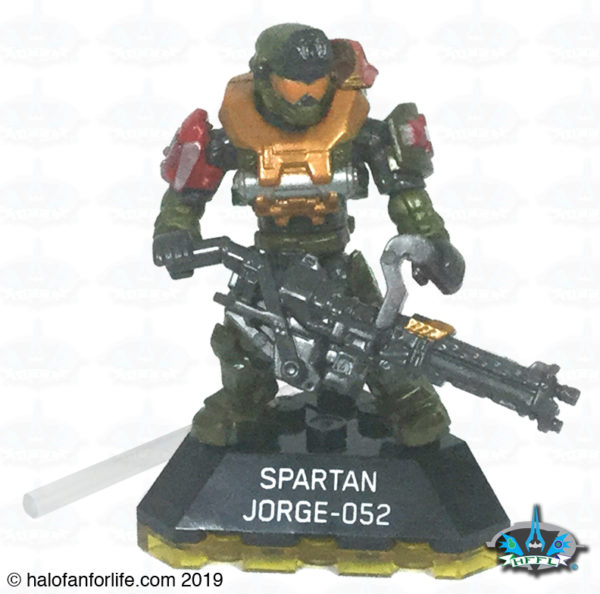 Captain Keyes – FINALLY! Keyes, has LONG been on my most wanted list of characters for Mega to make. Here he is seen in the Halo Reach/CE:A version, instead of the classic version from the original Halo Combat Evolved. I’m fine with that as I think it looks classier. 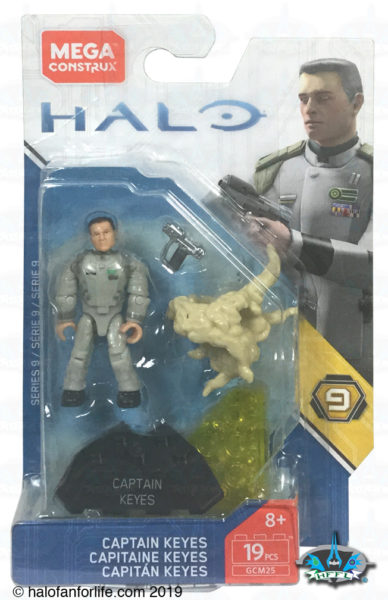 I’m a little surprised Keyes didn’t have grey or greying hair, but it still looks great. 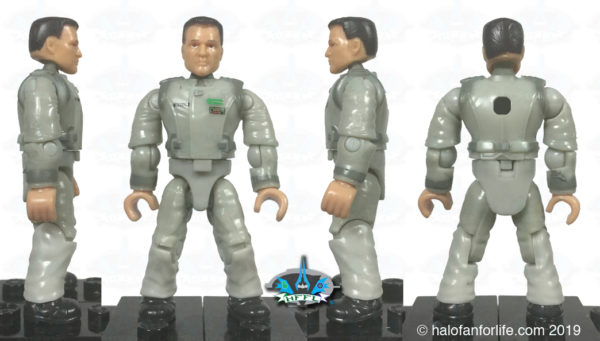 Keyes comes with a simple magnum. The magnum you first pick up when you play as Master Chief for the first time in the CE campaign! 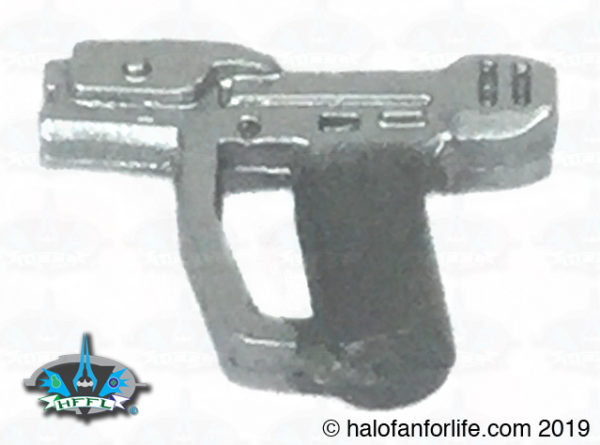 Curiously, Keyes also comes with this Flood mass, for lack of a better name. It’s spongy. To place it on to Keyes, you need to straighten out Keyes’ arms outward to the side. One slips through a hole, while his neck goes through another hole.

You can see the proper attachment below. Yes, I have him bent over as if the weight of the Flood mass is dragging him down.

The detail on Keyes’ uniform is fantastic. Folks, what may seem a little choppy here is TINY.  Like REALLY tiny. I’ve provided a closeup shot here. Believe me, at normal view from your head to about a foot away, it looks fantastic!

Keyes displayed with the Flood Mass. Poor Jacob. He really didn’t deserve to die that way… 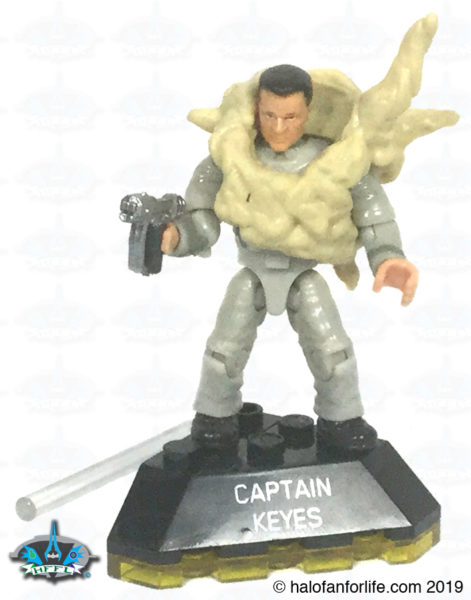 ODST Graves – Graves is a NEW character to the Halo Lore. He and the rest of Fireteam Raven were introduced in the arcade game of the same name. You can find Fireteam Raven at Dave and Busters and select other venues. 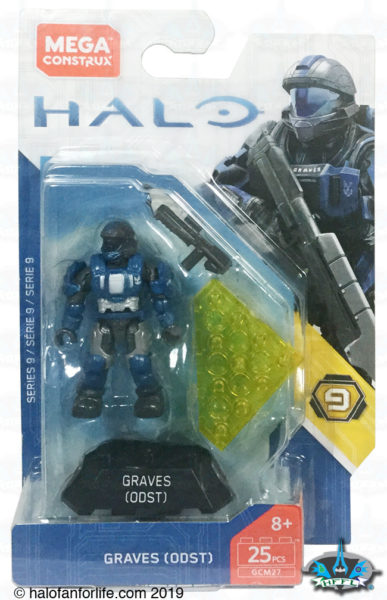 I like the look of Graves. Blue Grey and silver look great together. 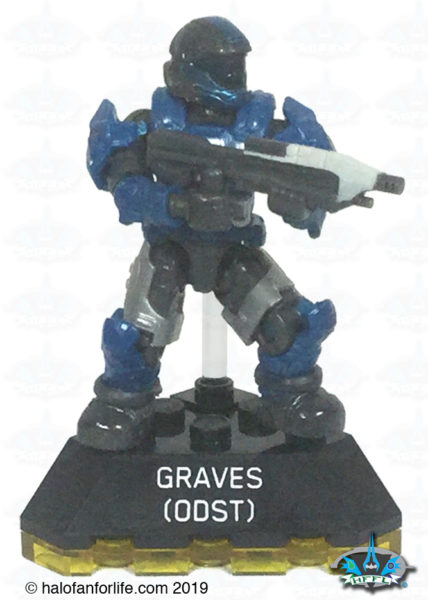 Here is the aforementioned Fireteam Raven Arcade Game: Its a four-person large cabinet game. Below that shows the 4 members of the squad. 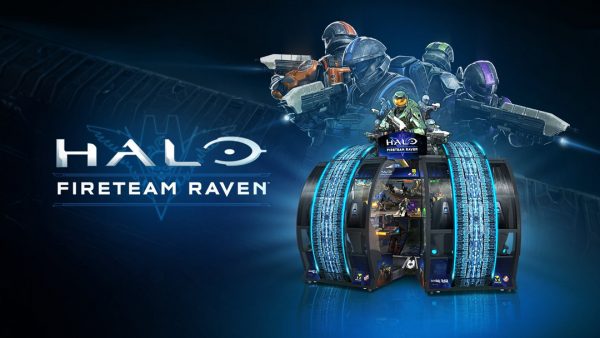 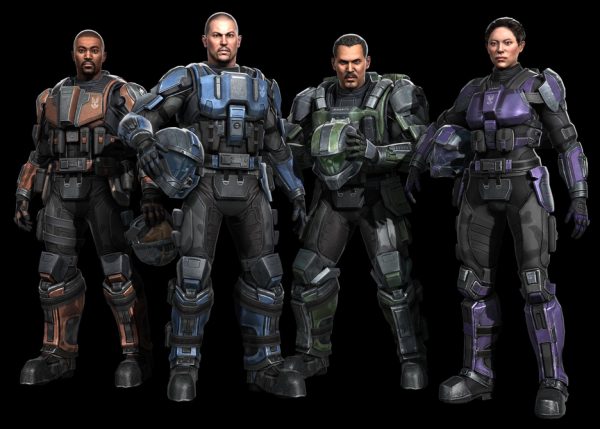 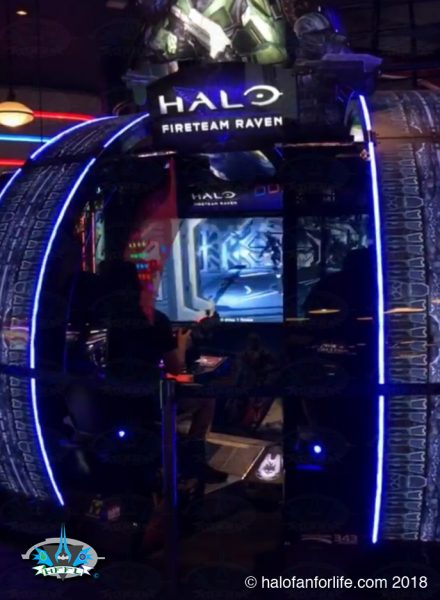 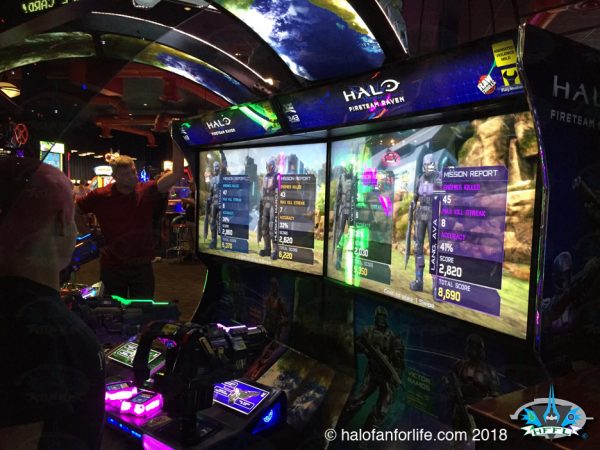 There is also a 2-person version of the arcade game, though I do not know where that version can be found/played at, as of this writing.

Sesa Refumee – YES!! Another on my most wanted list! 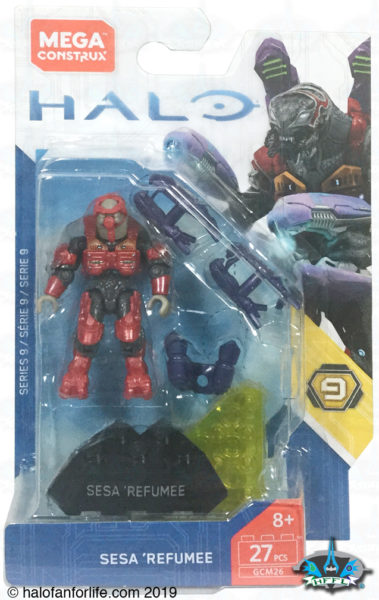 You can opt to not have the backpack on Sesa…

But really, who wants that? I want him with his signature lift device! The backpack slips between the back and the back armor. It’s slightly flexible to allow for getting into the correct position. 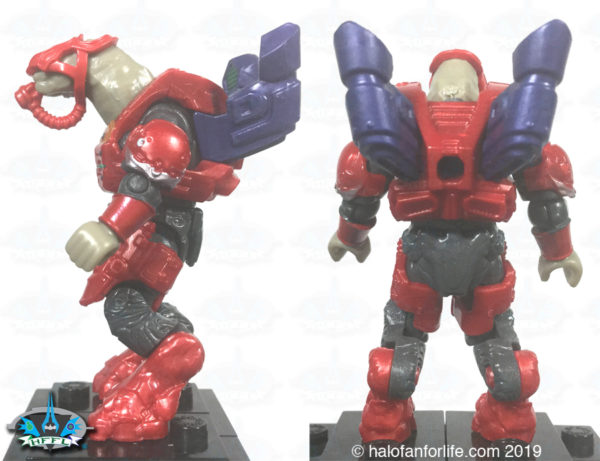 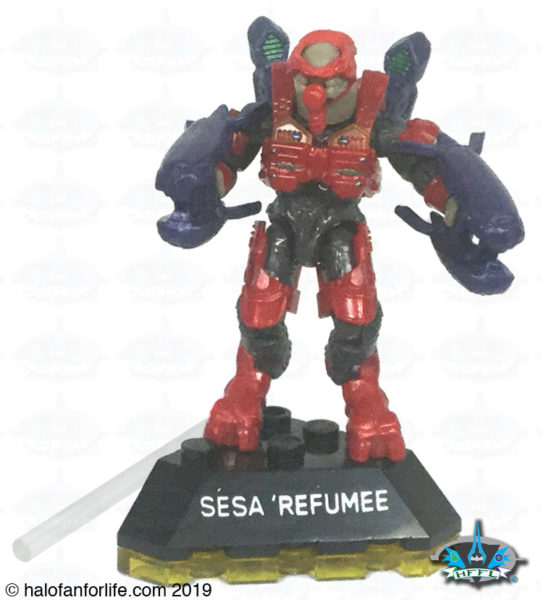 Even better when you place him on top of the stand like this. Looks like he’s in the air!

Spartan Soldier (“Dogface” skin) – Lastly we have a Spartan Soldier. With the red and white colors, he reminds me of what a “Captain Canada” might look like! I dig it!

Captain Canada, er, the Spartan Soldier comes with a Beam Rifle (Alpha). This is a very good paint application, considering the small size and shape of the weapon, not to mention the angles at which the pattern had to be applied. 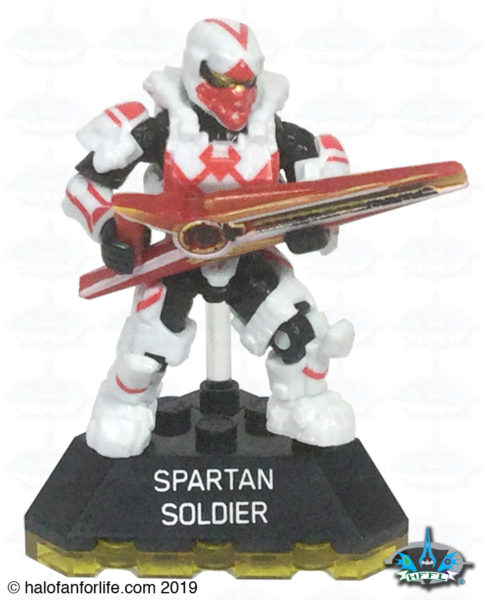 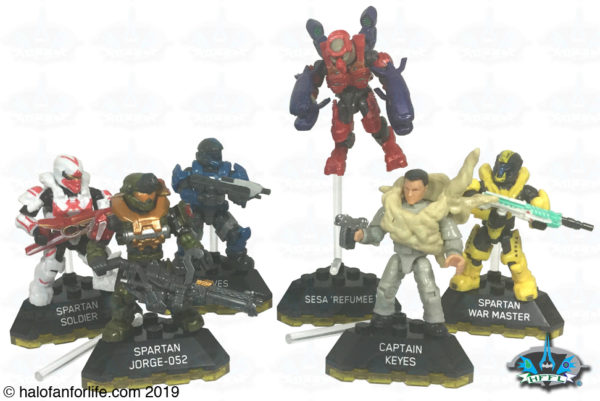 The gang is all here. Do the Spartans take out Sesa? Who eradicates the Flood mass?

Summary: There is next to no build time with these figures as it’s just the stand to put together. Series 9 has great selection of characters from Halo lore as well as two cool multiplayer Spartans.

Why did I give series 9, 9.6 out of 10?
I gave a rating for each figure, then roughly averaged the final tally. Below are my ratings per figure.
Spartan War Master (“Scipio” skin): I am a little bias here as this figure has the same colors as my favorite sports teams. So putting that aside, the actual Scipio markings are very cool. I absolutely enjoy the design of the War Master armor. This one gets a 10 of 10 medals from me.
Jorge: Another Bias here as Jorge is my favorite member of Noble Team. This is technically the second time we’ve had a Jorge figure. The first was in the Drone Ambush set using the Gen1 style of Spartans. The figure was not called Jorge at the time, but clearly was him, given the armor and colors used. While I love that first figure of Jorge, this one in the Heroes series puts that one to shame. This mostly due to the added bulk of the armor and additional articulation. The color is fantastic as well. 10 of 10 medals
Captain Keyes: Keyes is a figure that has been very high on my list of characters I wanted to see made. Mega choose to do the Halo CE Anniversary/Reach style of him, and I’m very okay with that. The figure has a lot of great detail on the chest, denoting ribbons, Keyes’ name and the Pillar of Autumn insignia. If it didn’t come with the Flood mass, I’d have been just as happy. 10 of 10 medals
ODST Graves: Graves is a new character for the lore of Halo. As explained above, he’s the leader of Fireteam Raven, the team of the same name as the arcade game. ODSTs are always great figs to have and Graves is no different. The deep blue hue of the armor with it’s silver details and black undersuit make for a striking figure. 9.5 of 10 medals
Sesa Refumee: Sesa is another on my most desired character list. TO finally have him after all these years is awesome! I do have just a couple of small points with this one. I wish the “helmet” and jetpack were metallic in color instead of a more flat color. As well, Sesa is missing his signature yellow “glasses” in the helmet. Those added details would have completed the figure. Other than those, it’s a fantastic rendition of the in-game model. 9 of 10 medals
Spartan Soldier (“Dogface” skin): The detailing of the “Dogface” skin is quite good. That it comes with the Alpha Beam Rifle make this even better. While I’m not a big fan of the armor personally, it’s still a solid figure. I would have gone with different color choices here instead of white/red. Again though, it is a good figure. So I’ll give this an 8 of 10 medals.

Let me break down my opinion of the value of this set. (In US dollars)
• Each figure with one of the weapons each $3.50 each.
• The buildable stand is made of 4 pieces. Normally this would mean a value of 40 cents for the complete stand. As each stand however comes with the name printed on the large black piece, I put the value of the whole stand at $1.
TOTAL: $4.50 (before tax and in U.S. dollars)

The price of $5 (average retail U.S. price) is just slightly over that. Since each figure comes on it’s own specific printed card with corresponding character artwork, I can waive the 50 cents difference in light of that.

Do I recommend it?  YES! Halo Heroes is one of the very few things I collect both a carded and another to open. These IMO, are highly collectible, especially if kept in the package.