Technical Specifications:
Build Time: 2 minutes to sort, 12-15 minutes to build (your time will vary as I took pics along the way for this review)
Set Piece Count: 130
Minifigures: Banished Brute with buildable Jump Pack
Weapons: Gravity Hammer
Accessories: figure stand with clear rod (to make Brute look like it’s in flight)
Special Features: Push button collapses radar dish
Cost: $15 US Mass Retail. (Though this was not heavily distributed in the States.)

The front box art is good, showing the Jump Pack Brute in action. The back of the box shows the action feature of the radar tower. 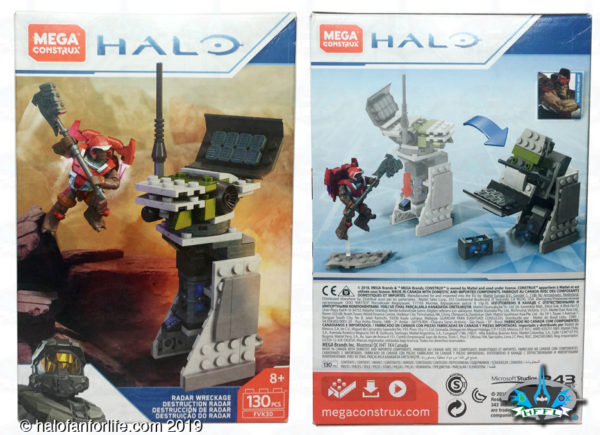 Inside the box, you get 5 bags of pieces and an instruction manual. 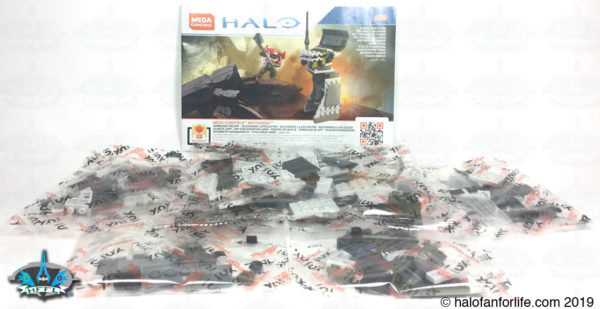 Here are some special pieces of this set. We may have had those angled pieces before, I can’t recall. There is one printed piece in the set. That’s going to play a big role later in the build. A 1X1 cylinder has a hole in the side (deliberate). Then there is the 5X3 offset piece. This is definitely a new piece for the Halo line.

Below are the contents of the box, sorted out.

Okay, let’s get into the build!
The radar assembly is made of two sections, that come together at a clip hinge. 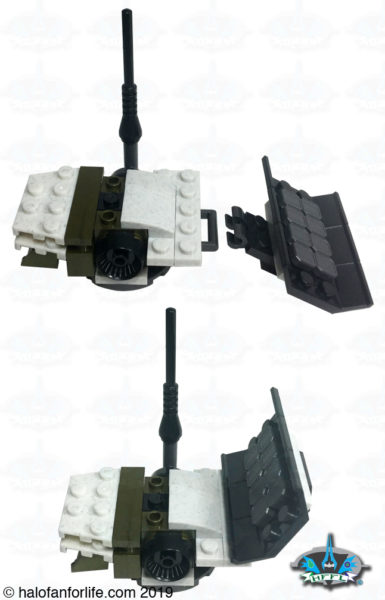 The tower uses side stud building to good effect. The only issue though is that it can not connect at the bottom to baseplates, should you want to do so.
The printed slope pieces acts as a button that can be pressed down. (I’ll show that later in the review.) 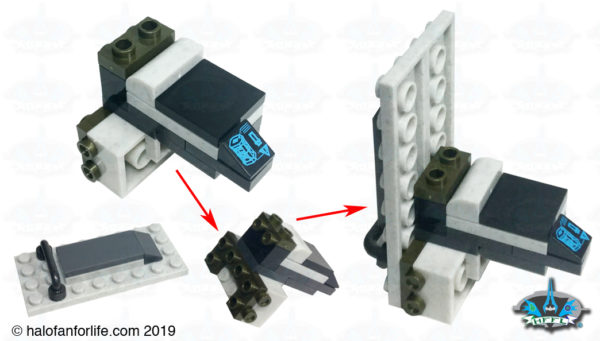 The top section of the tower also has a hinge joint. The default position of this assembly is shown at the bottom of this graphic. Don’t worry folks, it doesn’t stay like that when completely assemble though. 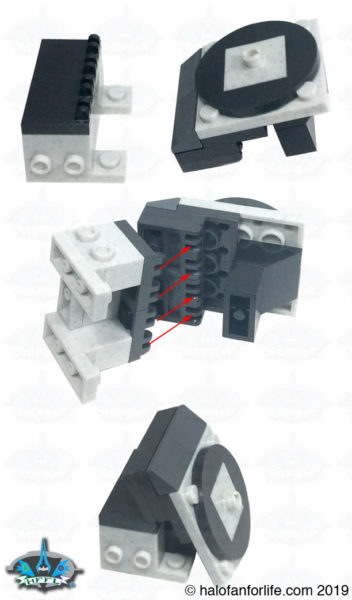 The top and bottom sections of the tower are connected. 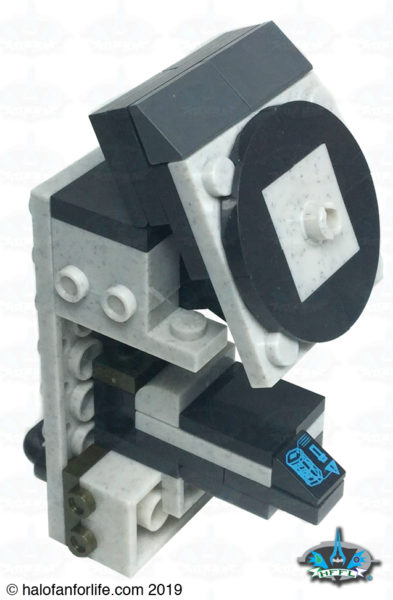 Next we add the tower sides. This adds a LOT of stability to the tower. If you do not had those on it, the tower would fall over, especially when you add the radar assembly. 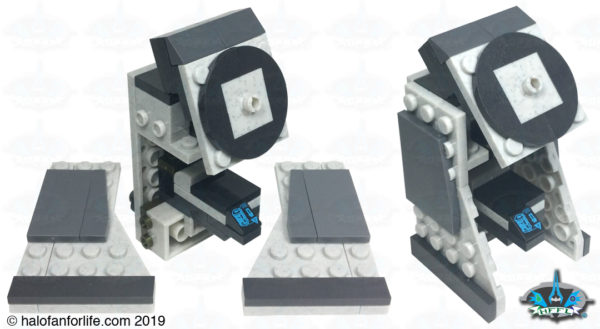 The all important piece to this, is this power core. 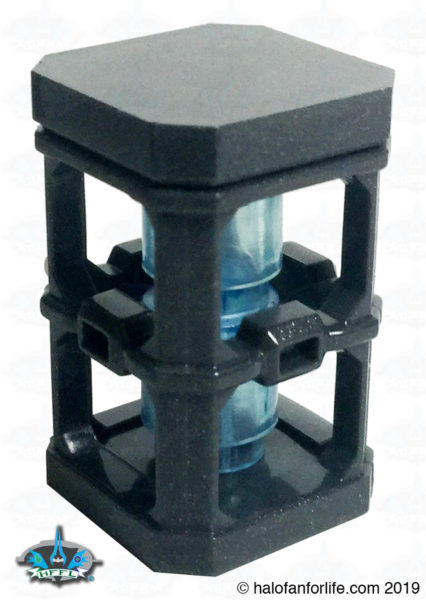 You move the hinge joint of the top of the tower up and place the power core in the space between. This enables the tower to stand fully upright. 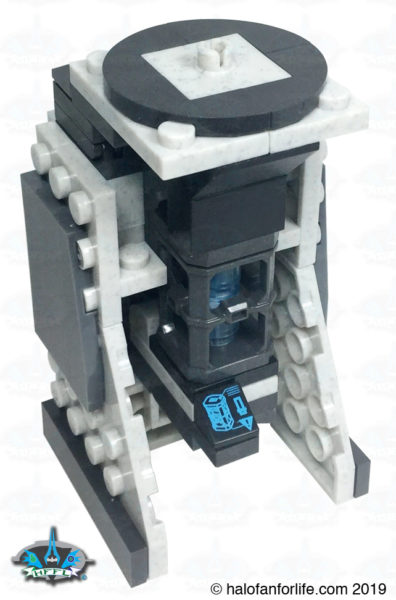 Add the radar assembly to the top and tower is complete. Note below the red arrow. By pushing down on the printed piece, the power core pops out of the tower and the tower collapses as shown. 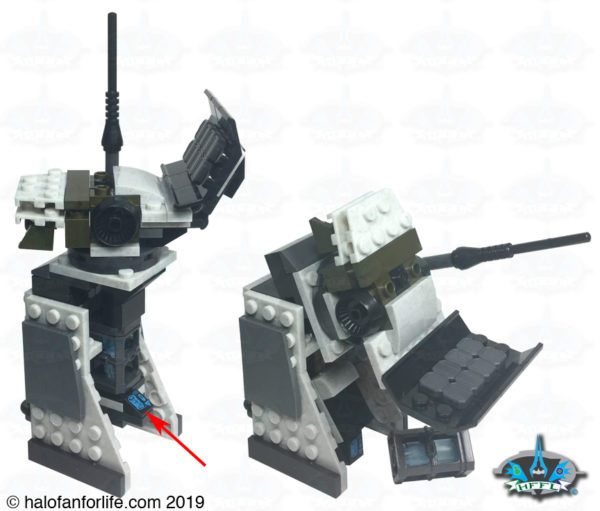 The Jump Pack Brute is a very cool figure. I’d have loved to have had a squad of 4-5 of these. The helmet is all new, as is the jump pack. The jump pack itself is made of 5 pieces. The main pack, the two top mounted thrusters and the two clear purple thrust exhausts. Also note, the 4 light brown bands. Those are soft rubber pieces that you put onto the figure (included in the set).

At the bottom of the Jump pack there are 3 holes. While you can use any to insert the clear rod into, to make the brute look like it’s in mid-jump, I highly suggest using the middle one. This is so you can evenly distribute the weight of the figure on to the rod.

I had just a few leftover pieces. Couldn’t really make much of them. 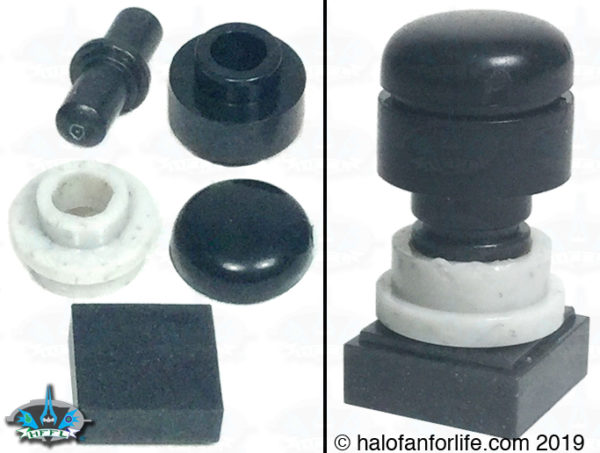 And finally, the full set. The tower looks good. As mentioned earlier in the review though, the side building technique that this set utilizes does not allow for it to be connected to a base plate. In the building block community, this is known as an “illegal” build because it does not conform to the normal way of building. This could have easily been fixed by having “L” shaped pieces that could have been affixed to the main tower. 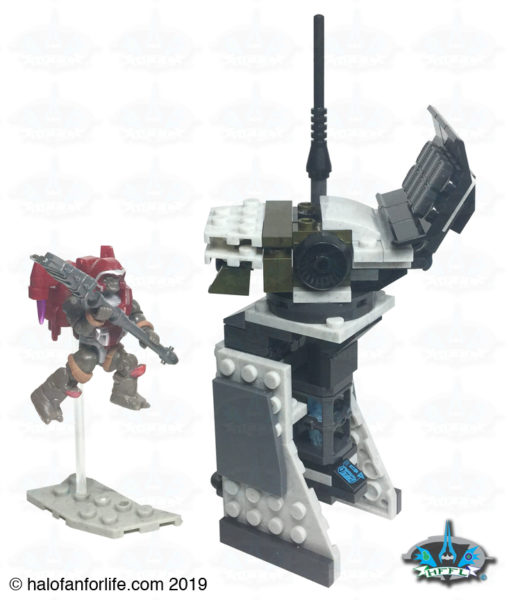 Summary: The set’s build time is quick. The action feature is neat and the figure is excellent!

Overall Rating: I give this set 9 out of 10 medals.
Why did I give it a 9 out of 10?
• The side build technique for the set doesn’t allow for it to be connected to a baseplate. This might be a detractor for some.
• At the cost of $15, I’d have liked to have had 2 Brutes in this set as the radar tower does not hold much value, despite it’s part count and action feature.

Here’s my opinion on the break down of the value of this set. (In US dollars)
• The Jump Pack Brute with it’s stand and weapon I put at $5 US. The more than normal amount is due to the NEW buildable Jump Pack
• The Radar Tower I put at $5.
TOTAL: $10 (before tax and in U.S. dollars)

Given that the set costs $15 US before tax, I think this is a little overpriced. However, given that this set was not distributed to the United States en mass, if you can find it for $15, it’s worth it.
I ended up paying $22.50 for mine from a RARE eBay auction I bid on. I do NOT like paying more than retail. Again though, since this wasn’t properly distributed to the States, I had to look elsewhere to find it. This was the best I could get after months of searching to find a somewhat reasonable price.

Do I recommend it?  Yes. The Brute is definitely the gem of the set. The action feature built into the tower is neat.