Just earlier today 2/21/2020, Mega Construx revealed three images of Halo Infinite sets. One of each were also given to three members of the Halo community to reveal. I’m happy to say my bud Gabe got to reveal the Warthog. The other two being a Mongoose and a Pelican.

Here are those images: 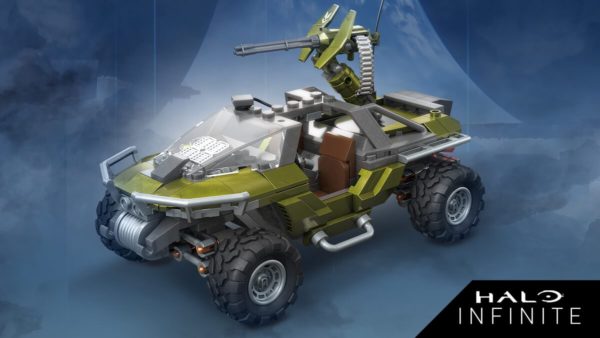 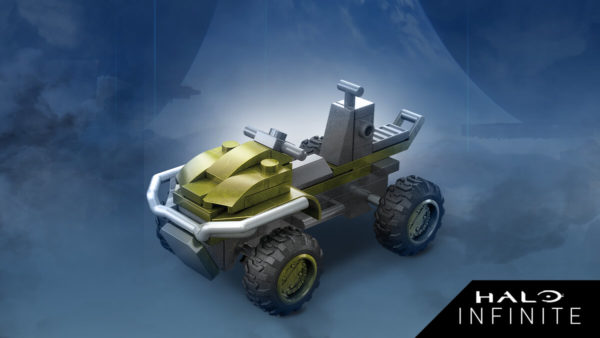 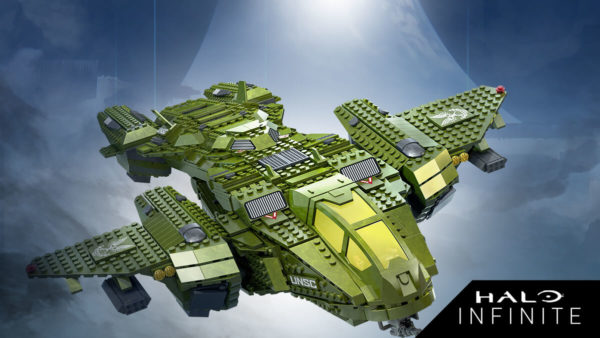 I’d like to talk about these sets and how they compare with just some of the previous iterations of these models in the past from Mega Construx (and Mega Bloks).

Let’s start with the Warthog:

At first glance you might not notice too many difference between this one and standard hogs of the past. However, if you take a closer look, there are some very real changes and a great callback to warthogs past.

Let’s dissect the pic a bit to see the individual changes and upgrades.

The Suspension for the wheels is ALL NEW! Gone it seems are the long bloks with pins to connect the wheels. Now we have double clip and pin mechanisms to not only hold the wheel but add what looks to be superior suspension.

A 2×2 Grid element has been added to the dashboard. Is this a vent for the engine?

We are getting back the original style side shields on the turret. But more importantly, we are getting the old turret back and not the flick missile treatment, Mattel had instituted on recent models (not just the Warthog). I for one am VERY happy about this!

Looks like we get to build a seat instead of the usual bucket seat molded part.

In some models of the Warthog, the hub caps are covered in armored hub caps. Here we return to the traditional hub cap design of the warthog. Once again, I’m happy about this!

Okay, the fuel is really water, but you know what I mean. At any rate, these cans do not look to be the same ones we have been getting. In fact they look to be built out of bloks instead of a molded piece. Hmm, I’ll have to see the back side of the vehicle with these to give better input.

Traditionally, the “tusks” of the warthog models protrude a bit further out. These ones however are a full one stud back. Also, not string and hook for the cable spool.

And finally, the foot step: 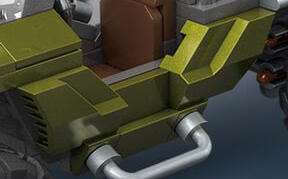 This area has seen a LOT of change over the years. I’m actually happy with this direction. It utilizes preexisting parts in Mega’s library and has some great angles to it.

All in all, this warthog is definitely an UPGRADE to models of the past. It has both elements of original trilogy Halo warthogs as well as 343 era warthogs.

Next, let’s take a look at the mongoose.

Long time collectors will immediately notice some major differences between this version of the mongoose and previous versions. Let’s take a look a these changes. 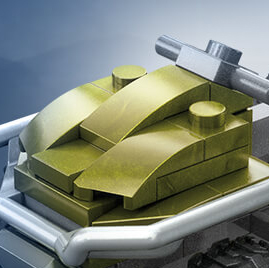 The front end has a slight redesign. The curved slope pieces no longer have a matching pair aligned to them underneath as has been in the past 2-3 models. Also of note, no guns. Does that mean there will be no gungoose in Halo Infinite? Who’s to say at this point.

Who boy…this is unfortunately a big down grade. True there has never been a real “seat” per say. But this tall sloped piece looks very out of place against other models that are a full one blok height shorter. Tall seats like this used to be called “banana” seats. I wonder if this is a new design element for Halo Infinite? 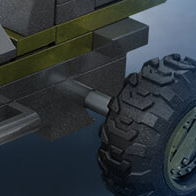 Gone is the cool suspension we have had in the past couple of releases. It used to be a circular type socket that the wheel fit onto with a rubber band underneath providing the actual suspension. Here by just this one pic’s showing, there appears to be no suspension. As for the cover usually associate with the wheels (I’m talking on top and not the hub caps), it hasn’t been there for the past two mongoose models, but was for all others prior.

Of the three newly revealed Infinite sets, this is my least favorite. I’ll have to get this in hand and do a much more thorough inspection and review of it.

And lastly, let’s look at this grand new Pelican!

This may perhaps be the BIGGEST change. This Pelican’s width is by far wider than other Mega Pelicans before it. They’ve been eight “studs’ wide between the wings. This one is a whopping FOURTEEN! That six extra stud width means the troop bay will be a LOT larger. This is something we fans have been asking for, for a LONG time.

Of note, the pilot figure is IN the cockpit here. I did a little photoshop magic to bring out the details more to show where his bare arms are. But you can still see them in the pic above.

One of the printed pieces is this UNSC logo. It looks VERY reminiscent of the OG logo. I’m liking it!

We’re getting a buildable missile pod! This is a cool new feature not yet seen before on any of Mega’s Pelican models of the past.

This pic shows some wing tip type details on the forward engines.  Hmm, I’ll be very interested to see how this looks in game. I LIKE IT!

YES! I’m happy that this looks like a proper machine gun. The electronic one didn’t look like that and the NMPD Pelican didn’t even have one. 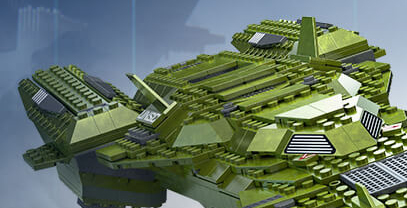 If this is the case, and it looks to be, by the different angles of the rear engines in the pic above, then we are getting some much needed returning articulation to the Pelican design! That was one thing I sorely missed in the electronic version from a few year ago.

This Pelican looks to be a BEAST OF A SET and definitely bigger than any Pelican set Mega has produced prior. No word on price point, but I’d venture a guess of at least $150, but likely closer to $200. Again though folks, that’s a GUESS!

I am extremely happy with this initial pic of the new Pelican! I can’t wait to get one to build and review for you folks!