The Tenth Anniversary Blind Bag series is one of two of the latest wave of blind bagged figures from Mega. Today we take a look at each one. 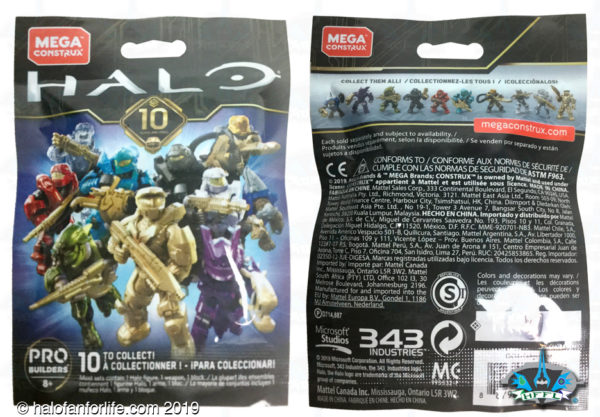 Here are the 10 figures that come with this series. 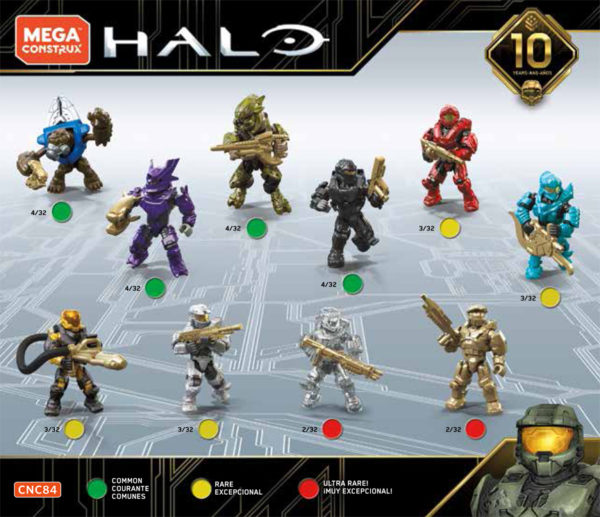 and the reverse side of the insert sheet 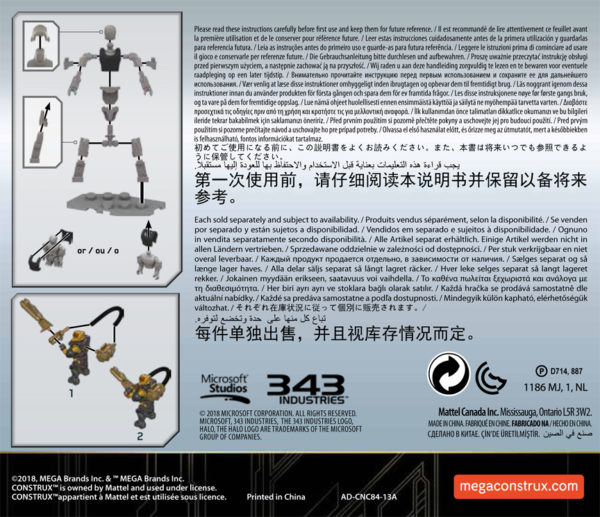 There is a special insert for the grunt as it builds differently that the rest of the figures in this series.

Of note there are different torsos in this series. The Spartan Stinger has a torso that is different from what I can recall ever before it. The other Spartans in the 10th Anniversary blind bag series have the standard male Spartan torso. 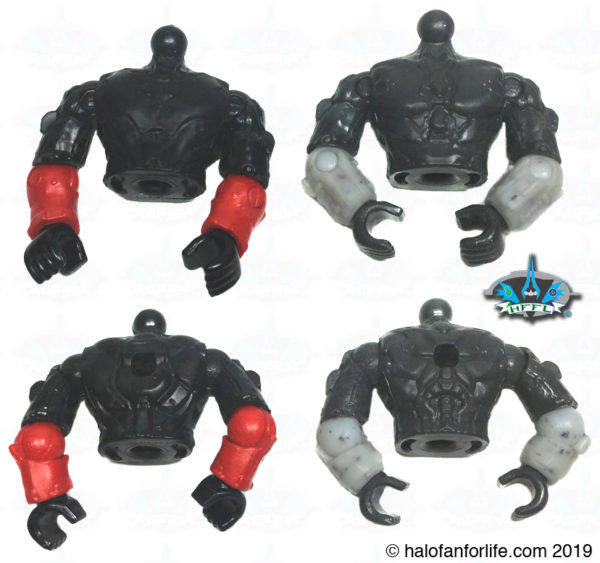 Each figures also comes with a Gold colored weapon to commemorate the 10th Anniversary of Mega having the license for Halo.

Let’s take a look at the individual figures, shall we?
Oh, before I go forward, each individual action shot of the figure and weapon accessory included are directly from Mega’s website. It’s their computer generated model and not the actual figure/weapon, so colors may vary slightly. My pics reflect the retail figures under normal lighting, while the Mega pics are computer generated and enhanced for optimum viewing. 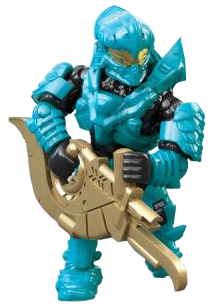 The Helioskrill is a welcome addition to this series. It’s unique “Sangheili” inspire armor sets it apart from other Spartan armor.

The helioskrill comes with a Bruteshot. A weapon I hope we see return in Halo Infinite. 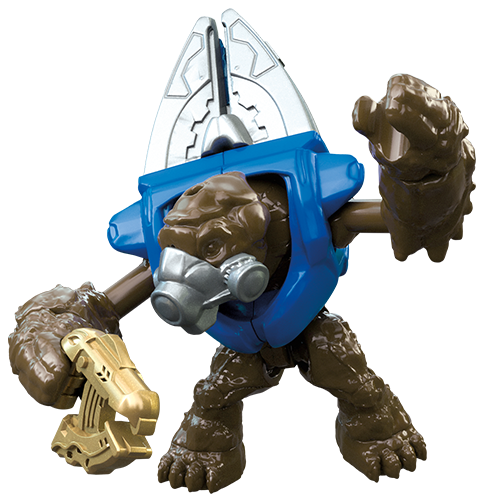 I am ALWAYS happy to get more Grunts. I really like the removable mask for the Grunt Minor.

Grunty comes with a Plasma Pistol 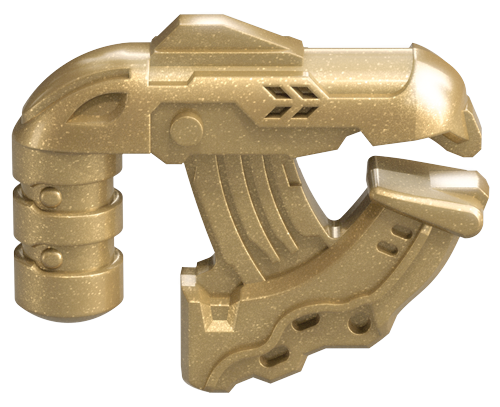 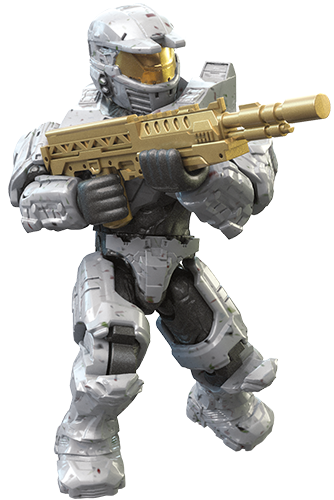 The MK IV Spartan isn’t a “clean” white. As you can see by both the computer generated model and my orthogonal view collage, it’s flecked with black and grey dots, giving it a somewhat dirty look. I actually prefer this as it makes them look “lived in” or war torn.

This fig comes with a scopeless DMR. (I would have preferred they added a scope to this. A DMR is practically useless without a scope, especially at range. 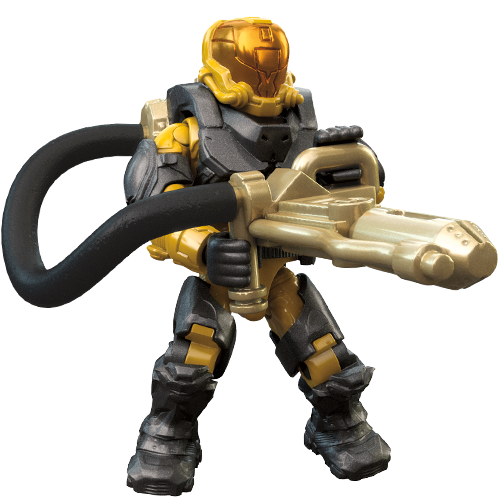 As you can see, the big difference between the computer generated figure and the actual figure is the color. It’s definitely YELLOW as opposed to the more mustard color of the computer version. (Though to be honest, I’d have preferred the mustard color.)

Of course it comes with the Flamethrower. I’m just a tinge surprised the backpack wasn’t gold as well. Not a big deal though. 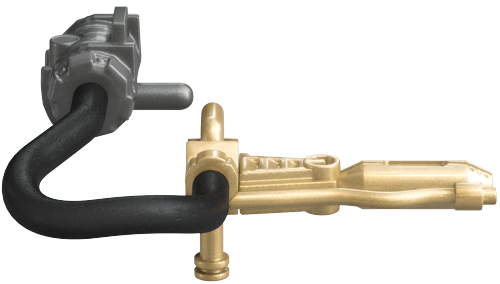 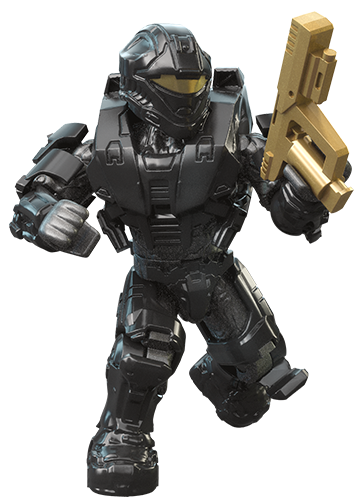 Man, I LOVES me a Recon Spartan! The first Black Recon Spartan to come out was in the original Elephant set, WAY back in 2011! It was a LONG sought for figure as many couldn’t afford to buy the Elephant at the time. 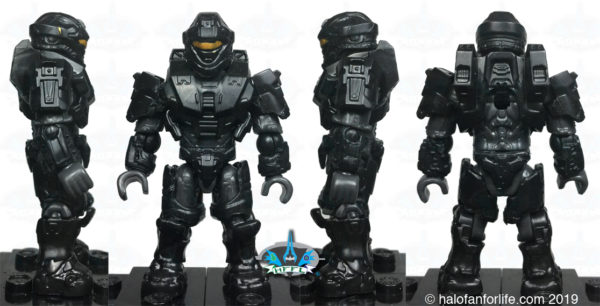 This fig comes with a SOCOM Pistol

Some more info about the Recon fig. This is only the 15th iteration of the figure over 10 years. Those all came in different colors, with only one being black previously as mentioned. Of those, this is the ninth to come in the new articulation.
If you missed out on the Black Recon back when, or weren’t collecting Halo Mega Bloks (and why weren’t you? LOL) then NOW is your chance to nab this figure! It’s TOTALLY worth it!!!
Here is the original black recon fig (pic courtesy of Mega). A bit of a difference and definitely an improvement! 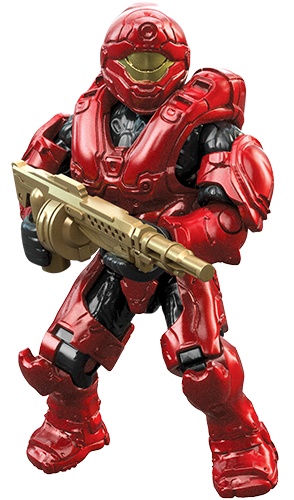 The Spartan Stinger is a rare figure indeed! IN fact, the ONLY other time this figure was produced was for an armor pack, last year. Then it was featured on the box art and within the window of the box itself. That one was in black, though billed as “Covert Ops”.
Personally, I really like this armor. The helmet I affectionately call the “Eyeball” for obvious reasons. 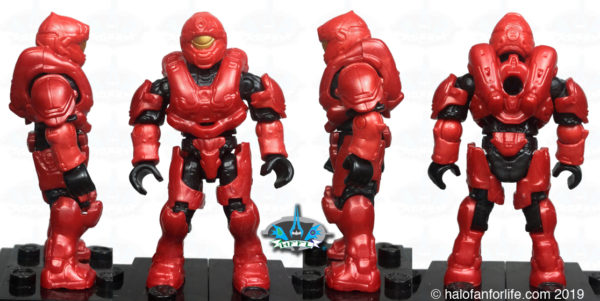 Eyeball comes with a SAW. 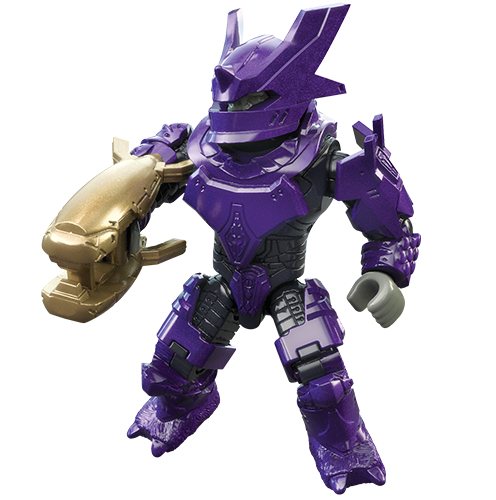 OOOOOh, we get this nice Grape Ape, er, Brute Captain figure in the 10th Anniversary blind bag series. It’s actually pretty standard fair for Brutes and we’ve had this figure albeit in different colors before. I suppose since this being the 10th anniversary, Mega wanted nearly all alien races represented. Personally, I’d have liked a new Brute Chieftain. Maybe we will get that in an upcoming Heroes series???? 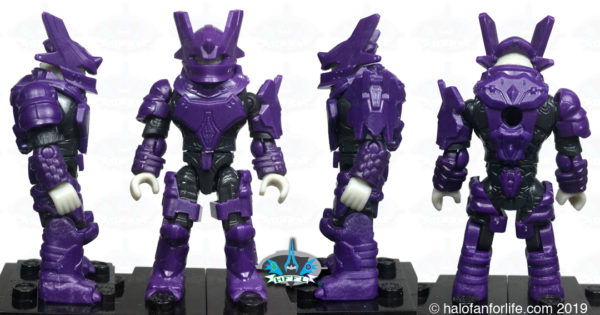 Brutey comes with a Plasma Rifle. 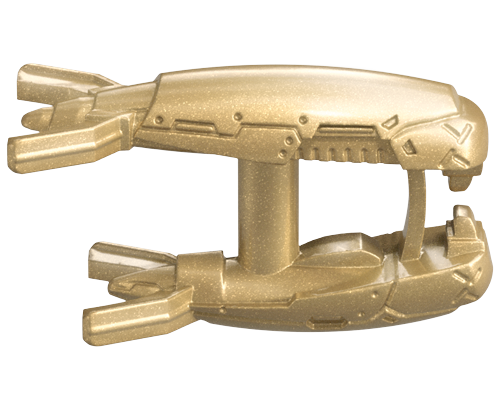 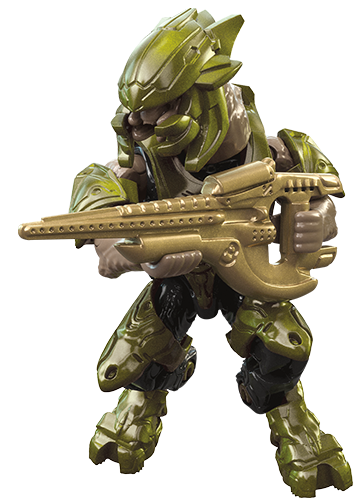 This Green Elite is a callback to the very first blind bag series. The original green Elite Minor was a bit different in color, whereas this one is closer to UNSC green. As well, the original didn’t have the added articulation and removable armor. Greenboy here is a MAJOR improvement!

He comes with a Covenant Carbine. 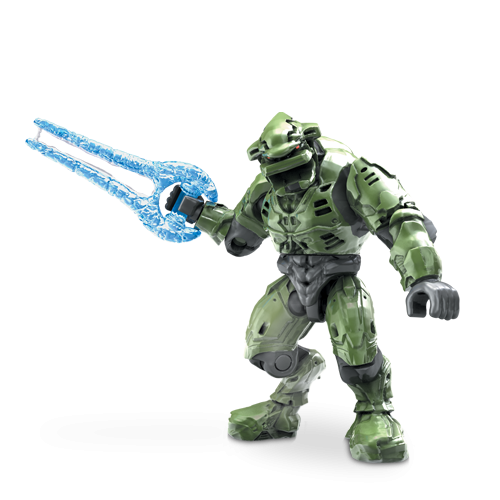 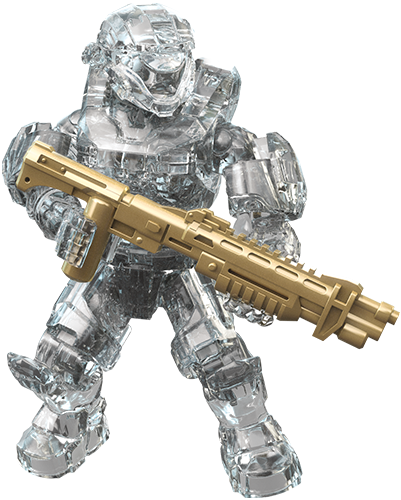 Whew, doesn’t that computer shot make the figure sparkle!
In reality, it’s not as sparkly. Well, perhaps if you put it under special lighting. Here the figure is under my normal photography light with a white background. In fact, I had to darken it a little as light was washing out some of the details of the figure.
At any rate, you all know that I LOVE translucent figures. So, I was VERY happy to get this one.
Of note, I couldn’t find this one initially, so it’s not in the group shot below. I did get it about a month later, but didn’t feel like retaking the group shot. That’s why it’s by itself. 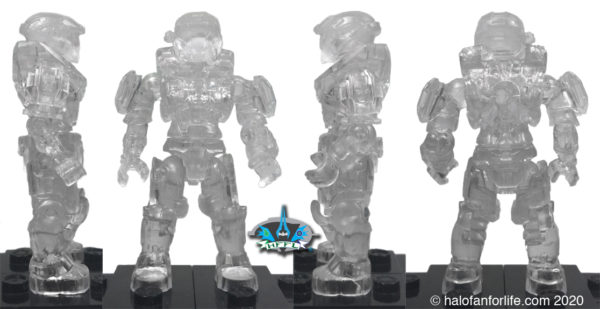 The Air Assault Spartan comes with a shotgun. 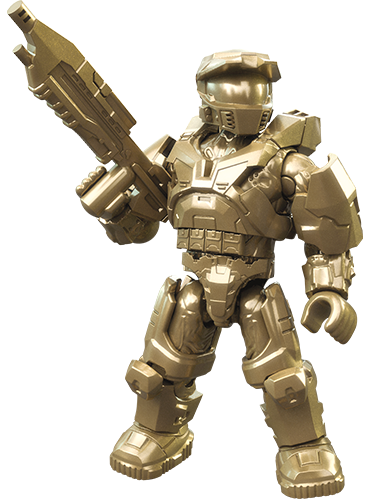 Okay, this is one time where the computer generated model shows the color better. For some reason, my ortho shot gives the figs a greenish tinge. It definitely is more gold than that.
This figure could really be just a gold Mark IV. But here it’s billed as Master Chief and I’m not one to argue that point.

Chief comes with an Assault Rifle.

followed by the A/C Air Assault with it’s own stand. 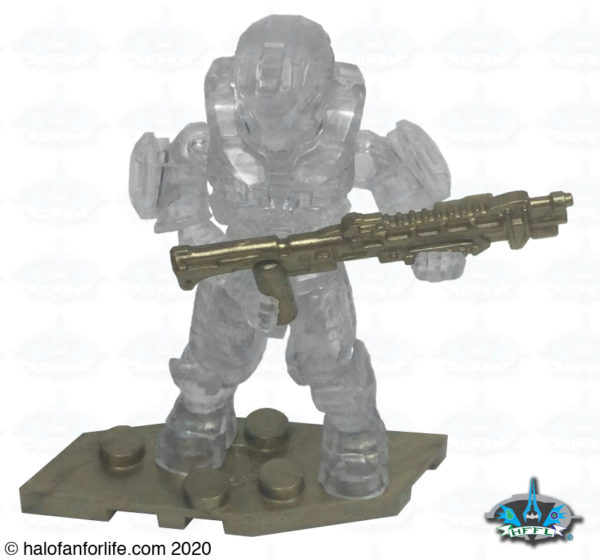 All in all a good series. For me, the gems in this specific series are the Black Recon and the Red Stinger. Always happy to have an army building grunt. Most of the other figs are fairly standard, but of course well updated in articulation from OG versions. The Gold Master Chief is a nice callout to the anniversary and will have a special place among my collection.

Do I recommend it?  For sure!  You may value some other figures in this series more than I. That’s the great thing about collecting. It’s an individual experience, that we all “collectively” enjoy!