Technical Specifications:
Build Time: 2 minutes to sort, 10-12 minutes to build (Your time will vary from mine as I took pics along the way for this review)
Set Piece Count: 81
Minifigures: Halo 4 style marine (small helmet) with Blue/Yellow armor
Weapons: Saw
Accessories: figure stand
Special Features: Alternate build via APP.
Cost: $15 US Mass Retail. (Though this was not heavily distributed in the States.) 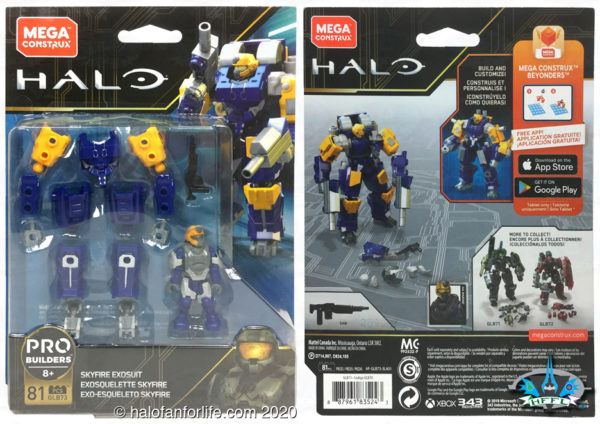 There is a small plastic tab at the top left of the plastic bubble on the front of the package to lift off, to make it easier to pull the bubble away from the cardboard. 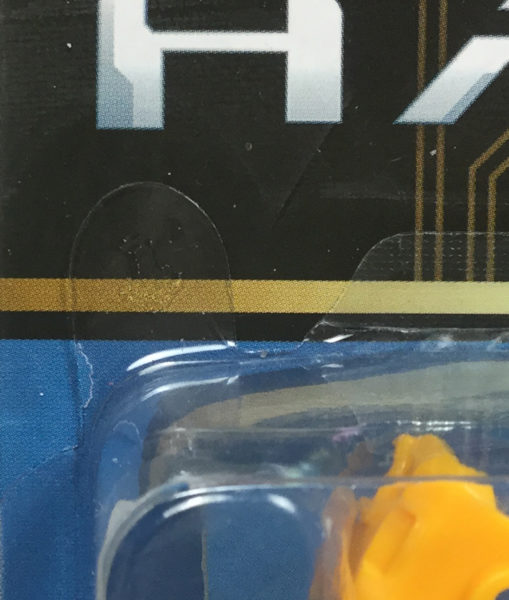 In the package you get the tray of armor parts, the figure, the SAW as well as two bags of parts and a small instruction manual.

Here are all of the pieces sorted out.

A shot of the figure unarmored. You will need to remove the armor if you plan on having it pilot the EXO suit. 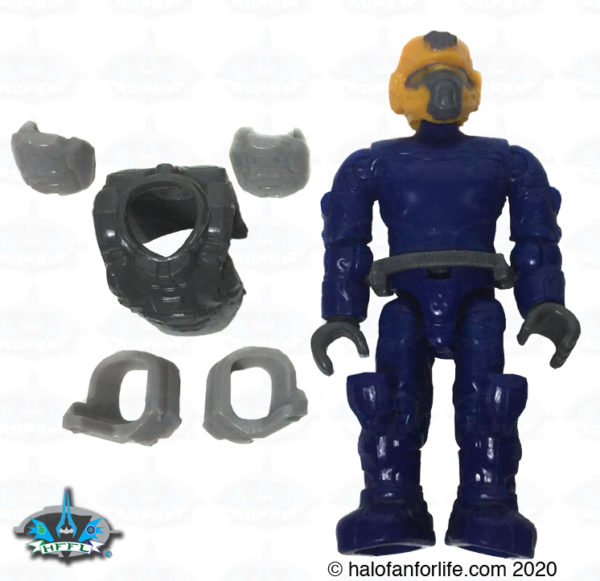 Okay, let’s get into the build.

You start by adding the back and shoulder armor. There is a pin in the back armor that attaches to the hole in the back of the figure. This will keep the figure securely locked into place. 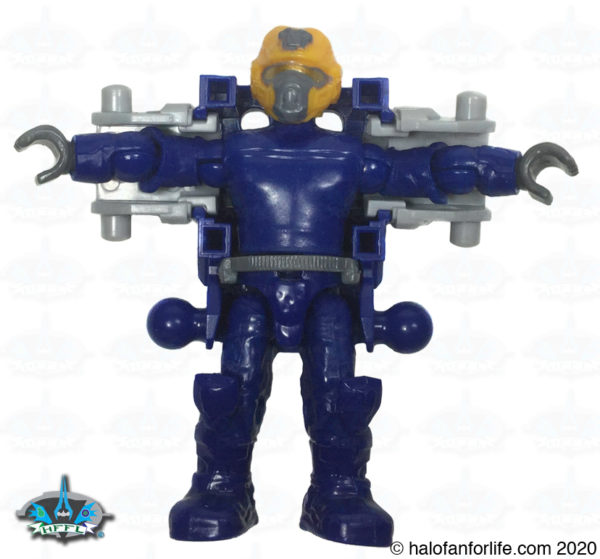 Next we build the legs. With exception to the small yellow angular piece near the top of the leg, this is the exact same build for both legs. The thigh armor is just turned 180° to accommodate the other leg of the figure.

Here are the legs attached. 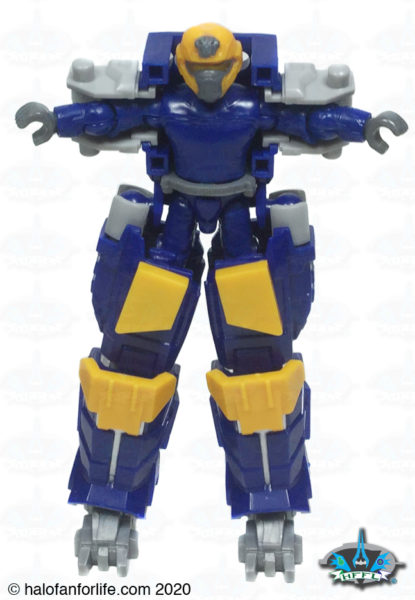 In this shot, you can see how the legs of the figure go into the thigh armor of the EXO suit. 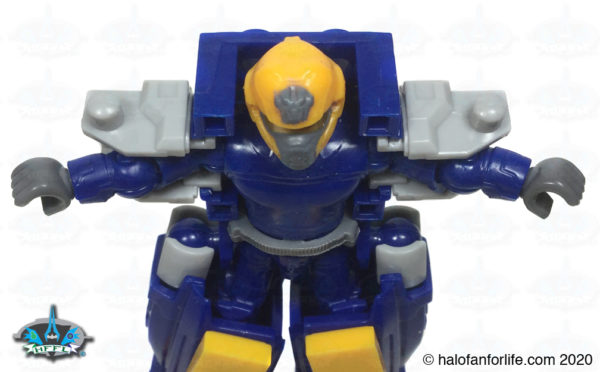 Next we build the arms. Similar to the arms, they are the exact same build, just with pieces turned to accommodate the other arm. 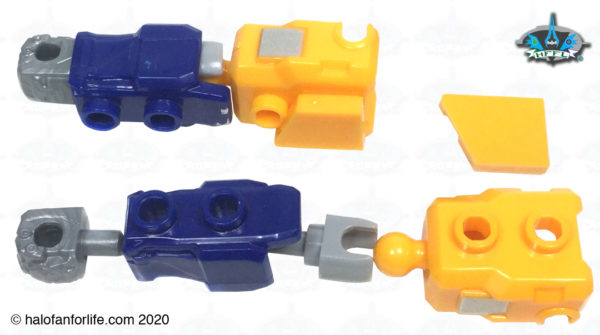 Here the armored arms are attached. 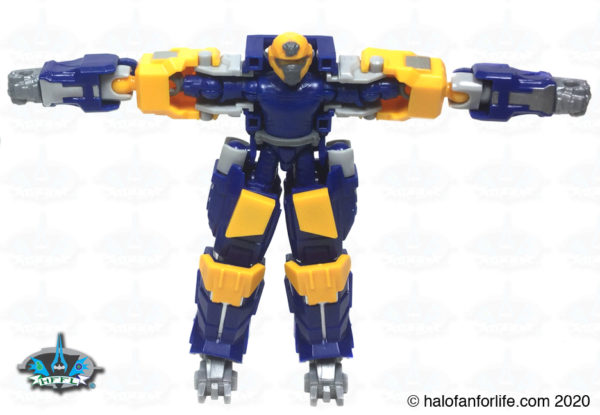 Once again, you can see how part of the figure is inserted into the armor. Note how the shoulder armor joint is aligned with the elbow joint of the figure. 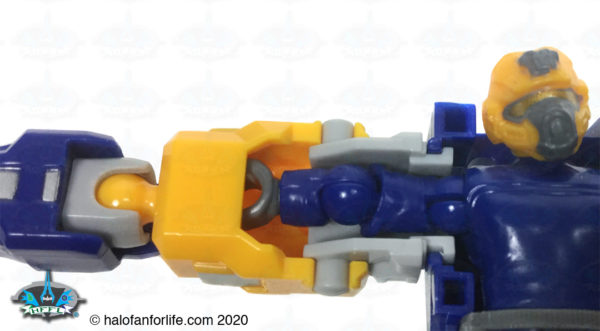 Here is the progress of the build thus far. It looks done, but there are more cool bits to add to it! 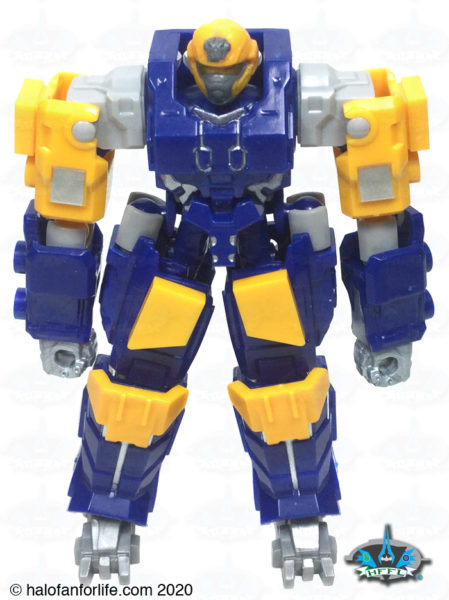 For example, this buildable backpack. 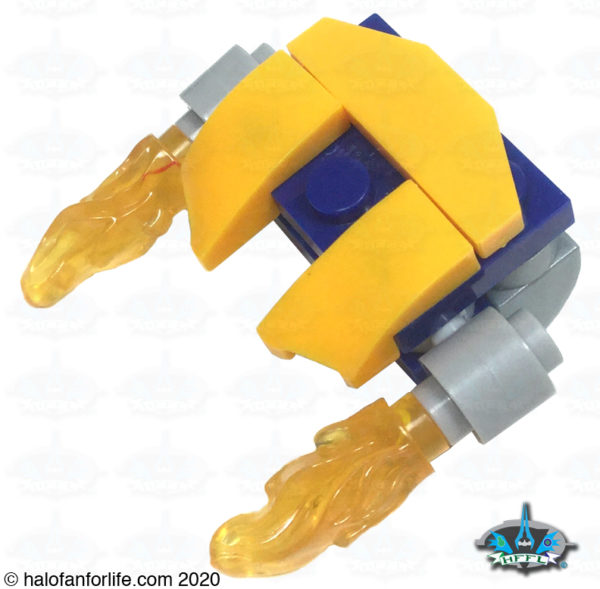 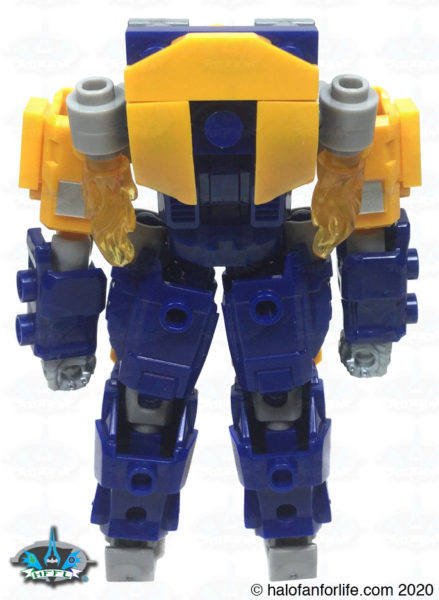 Next we build two blasters. Only one is shown below. 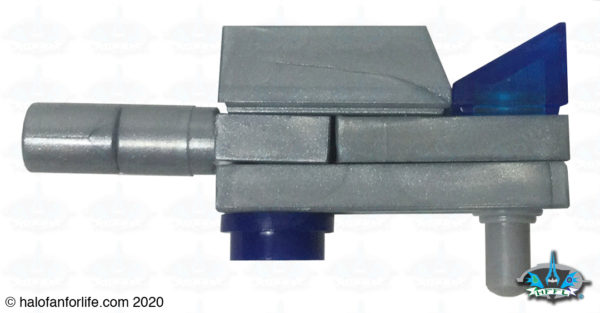 Here both are shown with the EXO suit holding them. 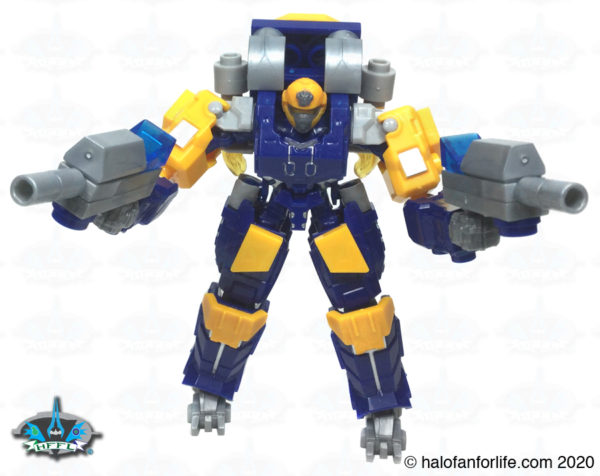 and a back view. 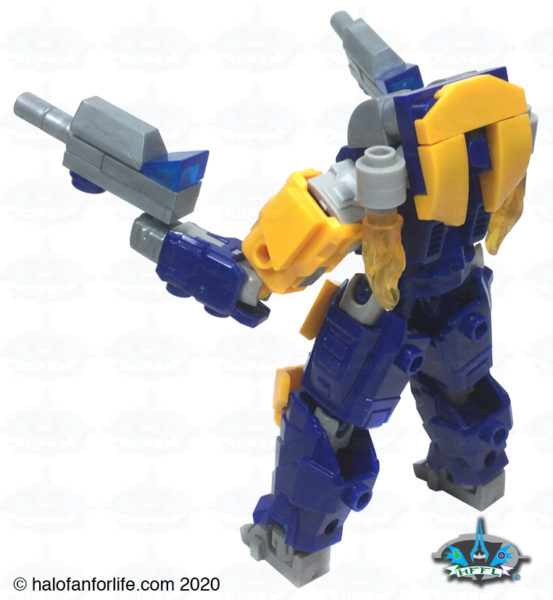 The EXO suit is a bit tall. Here shown with the figure out of the suit and the figure’s armor back on it. 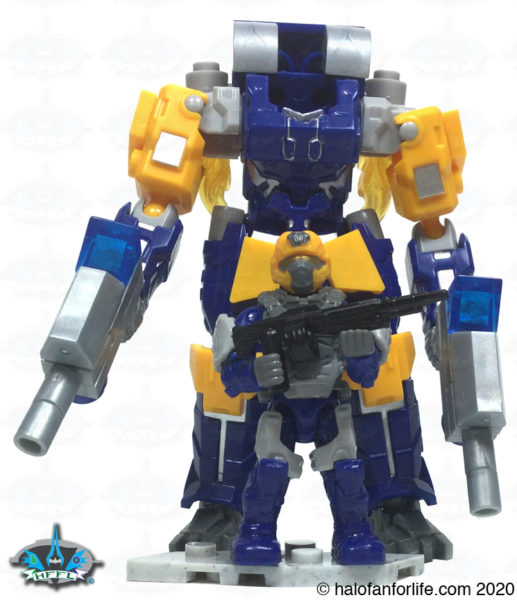 The figure in orthogonal views. It uses the now standard Halo 4 marine (with small helmet) armor. 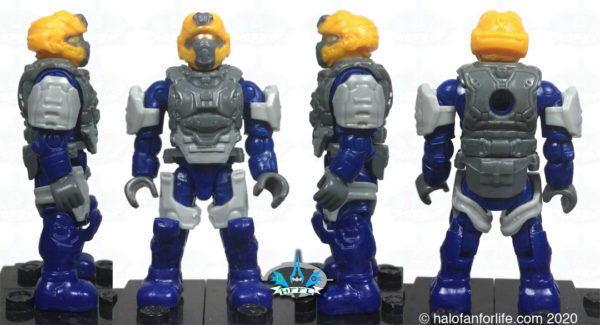 As part of the instruction manual, there is a page that shows an alternate build. This you can see below and access through the APP. 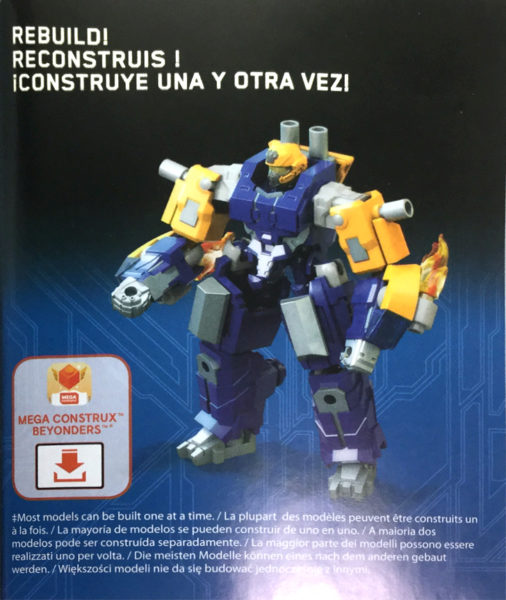 This is what the APP page looks like for this set. 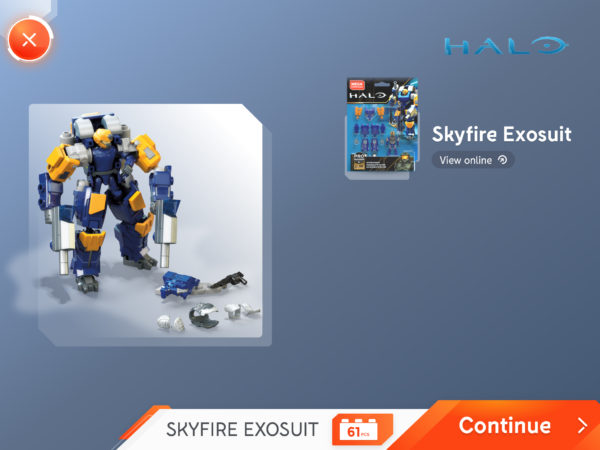 Here’s another shot from the App, showing the alternate mode. 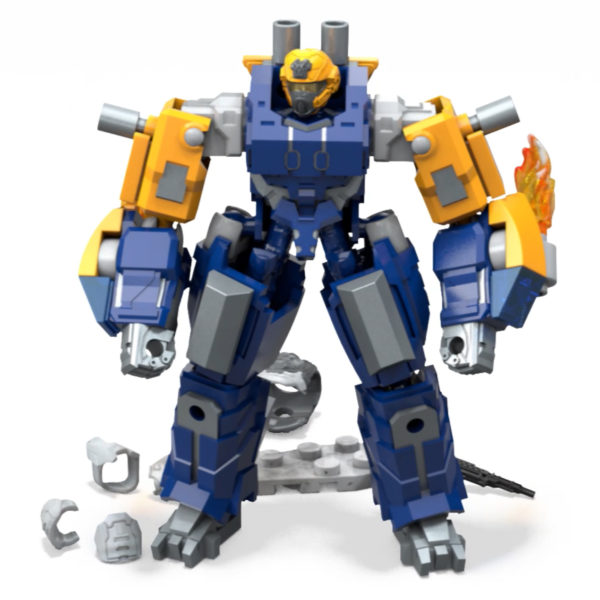 Summary: The set’s build time is quick. With mostly repetitive builds for the limbs, it’s an easy build. As of this writing, this is considered a non-canon EXO suit. Meaning, it does not appear in any of the games or novels.

Overall Rating: I give this set 8.5 out of 10 medals.
Why did I give it a 8.5 out of 10?
• This is a neat looking set. Though it isn’t canon to the Halo franchise.
• The colors are a bit odd for the UNSC as well. Perhaps this is a corporate faction that will appear in a future game?
• The large EXO suit blasters are unlike anything else in the franchise.

For those reasons, I knocked off a point and a half. However, as a toy, this is a fun little set. So really, the reasons for my taking points off only reflect the set not being an actual reflection of anything in the games. Again, as a toy, it works quite well.

Given that the set costs $15 US before tax, I find this set slightly overpriced. Account does need to be taken for the packaging and printing thereof as well. That said, I would like to have seen this set priced at $12.

Do I recommend it?  Yes. The only caveat I give to this is the set not being canon to the Halo franchise. If this doesn’t bother you, then go for it! It is indeed a fun little set.