The following article was sent to me by the writer himself: (As per requested, I’m removing the bulk of the article and replacing it with a synopsis of the article. To read the whole article, please go to the source link.)

The making of Halo 4: Forward Unto Dawn
By Ian Failes (Synopsis/Paraphrased)

Microsoft’s experimental Halo live-action miniseries Halo 4: Forward Unto Dawn has received over 50 million views since airing online last year. The five ‘webisodes’, produced by 343 Industries and directed by Stewart Hendler, were shown on MachinimaPrime’s YouTube channel and are now available on DVD/Blu-ray.

In one sequence from the series, Master Chief Petty Officer John-117 assists the United Nations Space Command in fending off a sniper attack. The attack was filmed at the Simon Fraser University Library, a location, like others in Forward Unto Dawn, that Arc measured and photographed extensively.

In some locations, such as the forest seen in the later episodes, photogrammetry proved difficult with the complicated tree surrounds.

Production filmed the sniper attach based on detailed storyboards and previs.

“The rule of thumb was that the good guy’s weapons were treated as if they were typical gun powder weapons, the bad guys were more sci-fi looking.”

A military advisor on set also proved extremely helpful. He referred to Master Chief as a ‘weapons platform’ and suggested that Chief wouldn’t fire indiscriminately. …those subtleties really make a difference.”

Not so welcoming wagon

Arc’s environment work included shots of a space elevator, and its destruction by Covenant vessels in one of the eps. Interior shots for the elevator were made of greenscreen hallway plates and CG geometry, with exteriors rendered as matte paintings and set extensions. …when the elevator actually fell apart we turned the piece off in animation and effects took over to trigger the crumbling.

One of the creatures brought to life by Arc for Dawn are Elites, Covenant warrior aliens.

Even more imposing creatures were the fierce Hunters in a fight against Master Chief. On set, an 11 foot pole stood in for the Hunter to provide camera and actor eyelines.

In only a few shots, Arc was required to create a CG Master Chief. A live action practical suit built by Legacy Effects was used for most shots. 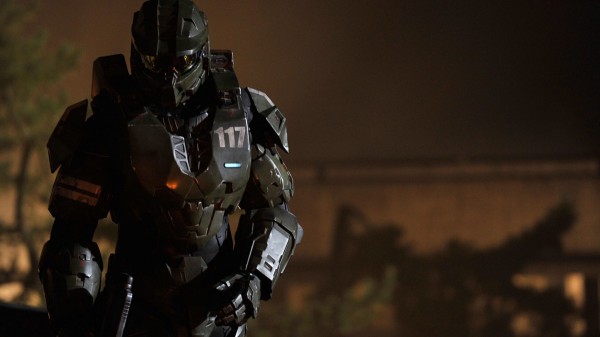 Wow, that was a cool article. I love to see how things are made. Thanks again to the writer of the article for the link, Ian Failes.