As I’ve commented on, I love the new white packaging design as it makes it stand out more from other dark toy packaging. 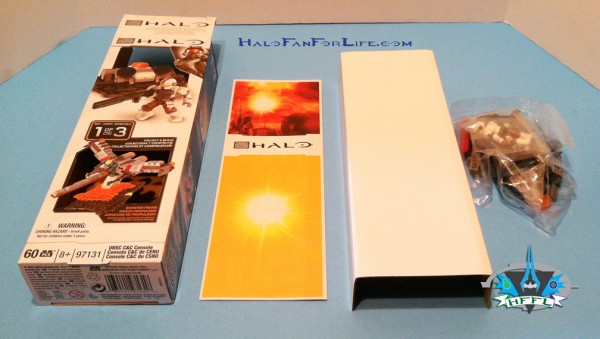 Here are the contents. As you can see, the directions (second from left) are used for part of the graphics for the box. The white “tray” holds it in place. The actual piece bag is small and only takes up roughly 25% of the inside of the box. So why is the box so tall then? Simple enough to answer.
In order to not only show the one set of three, the box had to be taller to show off the combination set of all three into the Booster Frame set. You’ll see all three sets together in another review along with the packaging side by side which will make more sense then.

The pieces are sorted out. It’s important to note the not including the minifig, there are actually 54 pieces. So I guess MEGA is counting the figure as six pieces? Though truthfully it’s made up of several more component parts. I count 14.

This is an easy build. Here’s the set completed. It actually reminds me more of a “mixing” table, as in DJ table, than a command console. On it’s own, it’s a nifty little set piece. 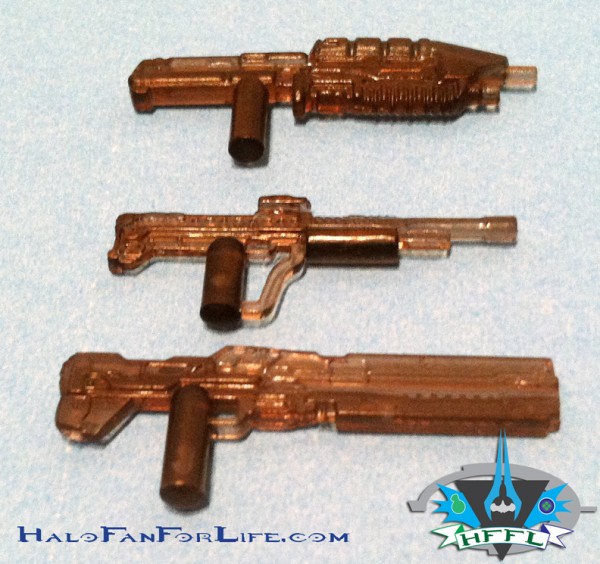 Here are the weapons included. Here’s the only part that I’m a little perplexed. Mind you I LOVE translucent toys. However, in this instance, it just doesn’t fit. Why give a solid painted figure translucent weapons? What’s funny is that the railgun on the packaging is shown in solid black. This is minor to me, though I’ve read posts on collecting forums of people bashing MEGA for this choice. Really folks, if you want a solid weapon, either spray paint these or just get some weapons packs for those extra weapons. This is a non-issue with me, just a strange decision by MEGA, IMO.

Now THIS is the GEM of the set, IMO. The minifig is AWESOME!. Paint detail is fantastic. This is the Medic version of the Marine. As I was a Hospital Corpsman in the US Navy, this figure holds a special little place in my heart. What’s better is that it’s an “Easter Egg” figure of a sense. Conan O’Brien and his sidekick Andy Ricter did some funny voice over work for Halo 4. Their characters were these very same Medics. So….I’m going to have to get TWO of this set at least! Gotta have my CoCo and Andy! LOL. 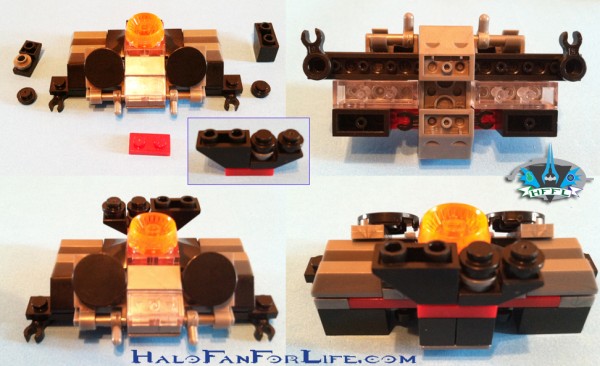 Finally, for those of you who may not want to display this on the base provided, I’m showing you a slightly alternate build. Here I show some of the pieces on the sides of the console that are then combined and attached unobtrusively to the back of the console. This way you can display flat without the base. As well all of your pieces are accounted for and in one place.

Summary: This is the first of the three Booster Frame sets. It’s a neat little set on it’s own, though doesn’t really resemble anything in the game. With a quick build, good weapons include (if odd choice for being translucent), and a knock-out minifig, this is a great set!

Overall Rating: I give this set 9 out for 10 medals. Again, the weapon color is minor to me, but I’ve read enough complaints by others to know it is a big deal in the collecting community. So that is the only reason this didn’t get the perfect 10 from me.