Here are the contents. As you can see, the directions (second from left) are used for part of the graphics for the box. The white “tray” holds it in place. The actual piece bag is small and only takes up roughly 25% of the inside of the box. So why is the box so tall then? Simple enough to answer.
In order to not only show the third set of three, the box had to be taller to show off the combination set of all three into the Booster Frame set.

The pieces are sorted out. It’s important to note the not including the minifig, there are actually 63 pieces. This confirms again from both the C&C console and Hangar Deck reviews that MEGA does indeed count the minifig as 6 pieces. 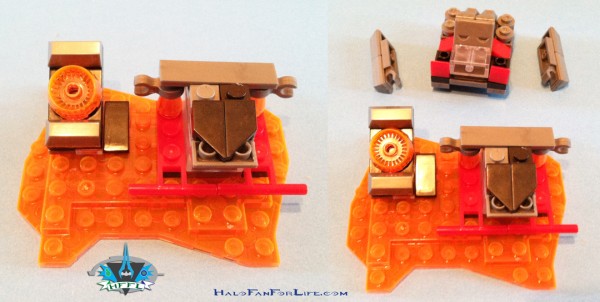 A couple steps in the build process of this set. 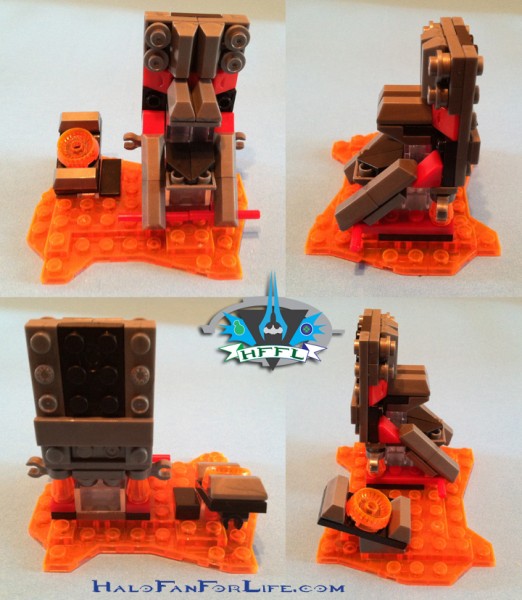 Of the three, I’d say this is second of them, but is close to first. Believe it or not, it’s that translucent orange baseplate that does it for me. But then, many of you readers know I LOVE see-through toys, so this should come as no surprise.
I do like that this looks like a Forerunner terminal. So by comparison, this set of the three is the most believable and accurate to the game.

Only two weapons included in this set. I do find that odd. Considering the minifig is a crawler which has less articulation as well. By this regard, I think we were just a smidge short changed here. Then again, this set does have the most pieces of the three. So it just about balances out. Still, I’d like to have seen another weapon at least. 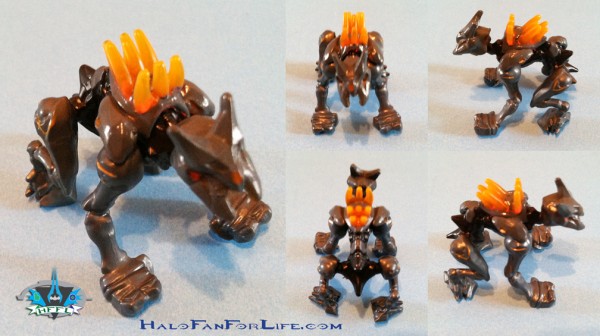 I very happy that MEGA didn’t ignore the other version of the crawler and gave us the Alpha. I quite like the light spikes coming out of it’s back. Hmm, I wonder if we’ll get a Cralwler Sniper down the line? Be nice to have, especially if MEGA includes the red translucent circle at the front of the head. That is the key piece that denotes it’s a sniper. 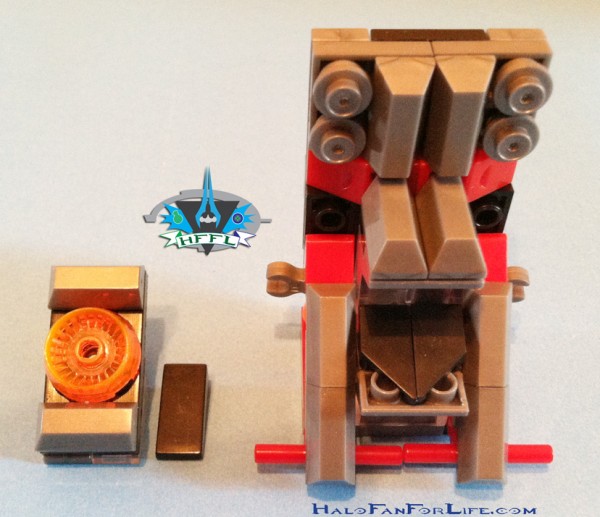 As with the other two sets in the Booster Frame series, I removed the set pieces to display them flat. This is EASILY done with this set. Anyone out there NOT want their translucent orange baseplates? If that’s the case, contact me, I WANT MORE of them! sal@halofanforlife.com

Summary: This is the third of the three Booster Frame sets. It’s the most game accurate of the three sets. A little short on the weapons and the minifig has less articulation than the other minifigs in this series. Quick build time.

Overall Rating: I give this set 8.5 out for 10 medals. Add another weapons to this and it gets a .5 higher rating. Add a Watcher to this and you get a perfect 10 rating. I just feel that the crawlers are not as good as the bi-pedals minifigs. Not because of sculpt, that’s GREAT. But because of articulation. I understand that would be near impossible at this size. So give us a Watcher also.
That said, I still recommend getting this set. Who knows, we may not see the Alpha Crawler again… So get it while it lasts!