[WARNING] Some colorful language is in the article. If you are offended by cussing, you may not want to read this article.

I was going to keep quiet on this and just post the graphics below, but you know what? The hell with that. This is MY blog. I’ll say what the hell I want. Freedom of speech! I do want to thank a certain podcasting friend for passing the links to this to me. Who that is, I’ll let you guess, as I have SEVERAL podcasting friends…So don’t assume you know which one sent the links to me.

I want to see what 343/Virgin gaming does from this. I give you the twitter feed of one “Giggle Monster” AKA, Connor White.  Here he is admitting to cheating in the Halo 4 Global Championship: (click pics to make BIGGER) 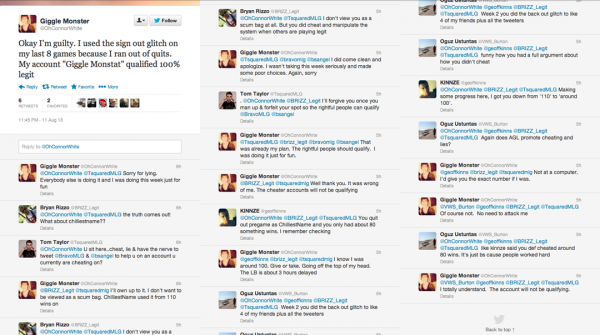 Here is his twitter feed as he tries to deal with the aftermath: 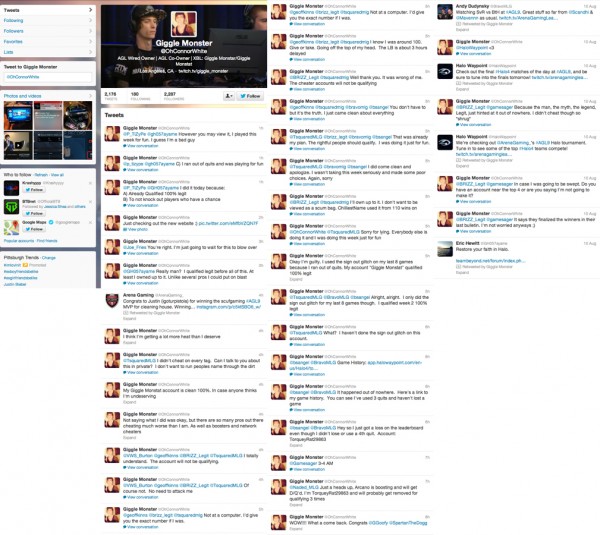 Folks, this is PRECISELY the type of BULL SHIT I was eluding to in my previous article back on August 4. http://halofanforlife.com/?p=9502

Here specifically is one paragraph from that article I want to bring up again:
Beyond these rules, here are some other things I would have had in place: Players who qualified from events, RTX for example are NOT permitted to play in the online portion or later events. Why? Because for instance there is a certain competitor who qualified at RTX and who IS playing in the online competition. WHY? REALLY? SO you want to wreck people’s hopes BEFORE they even get to Seattle? Totally NOT fair gameplay at all.

Now, while I mention previous events, and this guy qualified in week two of the online portion, my point is still valid. If you have already qualified, you should be required NOT to play in any further portion of the qualifying online contest or real life events.

In the article I linked to, I specifically stated my disgust with people using alternate accounts. And that is exactly what this douchebag did. And yes, feel free to tell him I said this. It’s a DICK MOVE! Regardless that he came clean about cheating, even if he already qualified, he admitted to playing THIS week to “knock out players who have a chance.” I don’t often cuss on my blog, because I try to keep it family friendly, but you know what, FUCK YOU Connor White. You’re the very type of piece of shit pro-player I’ve been disgusted with for SO long and whom I blame for fucking up Halo’s popularity.

Did you all also notice that in the header of his twitter feed that he’s the Co-Owner of AGL? WTF? REALLY dude? So AGL promots cheating then? Or unfair sportsmanship? Honest to gawd, AGL needs to be straight up BANNED from using Halo for tournaments. Or they need remove White from any ownership of AGL. If the CO-OWNER can do this, then what? He essentially is saying it’s okay to cheat? Yes, he came clean, so what! He shouldn’t have done it in the first place!

This makes 343 look like complete ASSES for promoting AGL. Further it makes then even MORE asses for inviting those AGLers who won certain tournaments in AGL.

Come on 343, do the RIGHT thing here. Bring that big ass fucking BAN-HAMMER down on this league and Connor White. If you don’t you are going to lose even more respect that you are trying to gain back. At the least rescind those invitations to AGLers.

Harsh? HELL YEAH! This joker made a mockery of the whole tournament. You know what Connor, I don’t give a flying fuck if “everyone else is doing it.” It doesn’t mean it’s right for YOU to do it. Being the co-owner of AGL you ARE held to a HIGER standard, whether you like it or not. Otherwise your whole business and league is a FARCE and should be called into question.

Really dude, your actions could bring a lawsuit against you and your business. Hell, it might even shut down the tournament. And once all the cheaters have been routed out, they can get sued as well…Hmm, maybe this is a good thing then…

No, I’m not going to bring a suit against anyone. But damn, this is vindication for me and MANY other gamers who think pro-players are “AAA” Assholes and Attitudes!

343, NOW can you see why pro-players should NOT be allowed? I’m not going to say this kind of shit wouldn’t happen without them, but their competitiveness is MUCH higher than others to the point of doing this kind of crap. Stricter rules for a tournament SHOULD have been in place.

Gawd damn, give me the opportunity to create a tourney and you’ll see the kinds of restrictions that should have been, especially with $500K on the line and the first place prize being $200K.

You know, I STILL don’t know who won the Spartan Ops tourney from back in JANUARY!

This is why I just HATE pro-gaming. TOO MUCH MONEY on the line for what? VIDEO GAMES? For fucks sake! REALLY? At least it took 75 years in the NFL before we had to put up with the kind of assholes that professional video gaming has cranked out from near day-one!

Did you folks look/read those graphics above? Notice the last post in the one where he retweeted Gh057ayame? It was the “Restore your faith in Halo.” thread on teambeyond…A bit ironic there huh? How the frack can we restore our faith in Halo, when dudes like this (who should KNOW better) do this?

Folks, I want to make a comparison here. Pete Rose. Some of you may be old enough to remember him. He was a STELLAR pro baseball player. He did NOT use drugs nor cheat to be a great ball player. He was inducted into the hall of fame. Then…it was found out that he was placing bets on baseball games. None for the team he was playing/coaching for at the time. And you know what? His ass was thrown out of the hall of fame. He did NOT cheat, he just was very tacky, betting on other teams in the same league he played/coached in.

This guy Connor White? He did MUCH WORSE than Pete Rose, IMO. He needs to step down from AGL and give up his rights to ALL parts of the business. It’s the ONLY way he can save AGL from a HUGE disgrace. Take it upon himself ONLY, so it won’t reflect poorly on AGL. Otherwise, 343 definitely has the right to (AND SHOULD) ban them from using Halo in competitions. AND, he needs to be immediately disqualified from the tournament altogether, regardless that he supposedly got there legitimately in week two. The issue there is that 343 would be compelled to then have to review ALL of the thousands of games in the tourney. Why? Because if they ban White, then they have to be fair and ban EVERYONE else who did the same thing.

What do you folks think of this VERY HOT piece of news?

4 thoughts on “Pro Player admits to CHEATING in the Halo 4 Global Championship.”