Now that the first two HUNTtheTRUTH commercials have been revealed, I take a look at certain images of each that are near identical to one another and delve a little deeper into the possible meaning between them.

If you haven’t seen the video on YouTube yet, check them out HERE (Locke) and HERE (Chief).

Okay, now that you’ve looked at them, let’s look at those comparable shots. The top portion is from Locke’s commercial, while the bottom, is Chief’s.

From the get-go we see there is plenty of devastation in each video. The most obvious is that it appears there is more destruction from Chief’s point of view. We’ll discuss this in a moment. 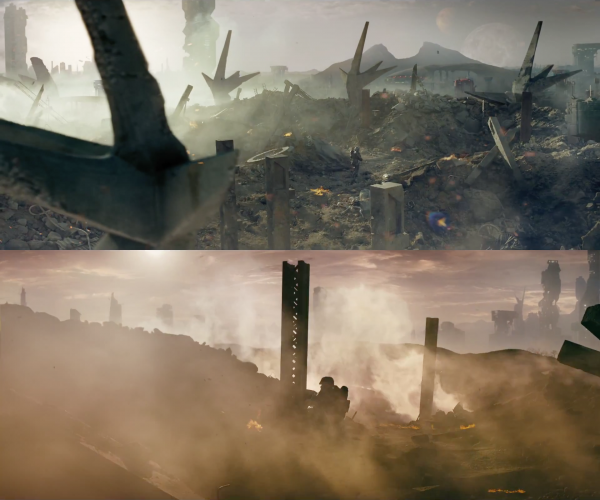 During each commercial, Locke and Chief come upon a sculpted statue of Master Chief. Locke looks up at it several times and goes into a speech of about Chief being a savior AND a betrayer. Several times he calls the Chief a conquerer with some variation. 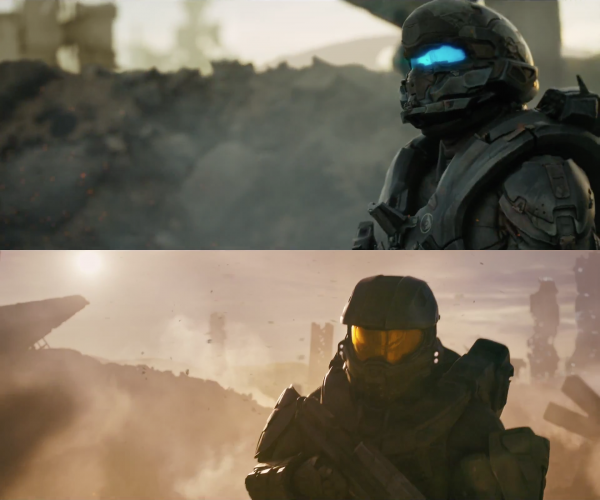 On the other side of things, Chief asks Locke if this was all worth what he (Locke) compromised.

In the comparison below we do see that the damage is not the same. One big difference is the lighting. Make note of a moon on the horizon from Chief’s spot. Two different times of day. This could be one reason the lighting is different. It could also be a metaphor. Locke represents the dawn of a new day, while Chief represents to passing of a day. The beginning of Locke and the End of Master Chief?? 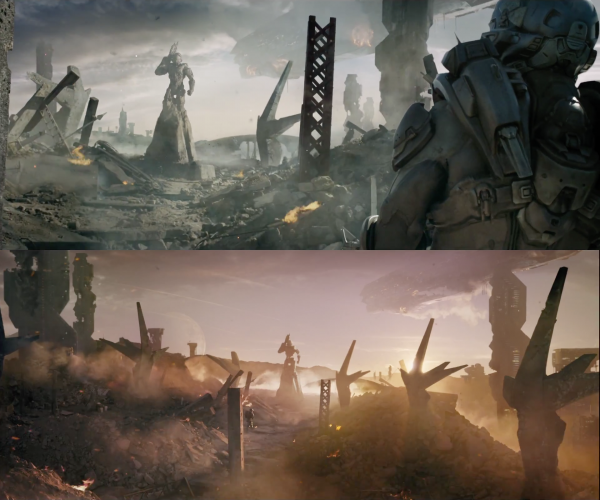 Clearly this two comparisons are all about the Chief. More damage is done to the statue in the below pic. A good chunk of the helmet is blown away. As well, the left shoulder is damaged and shows the rebar that is holding the Chief together. Is this again another metaphor? Has Chief lost his mind? Does the rebar signify that he is still strong even under the armor? 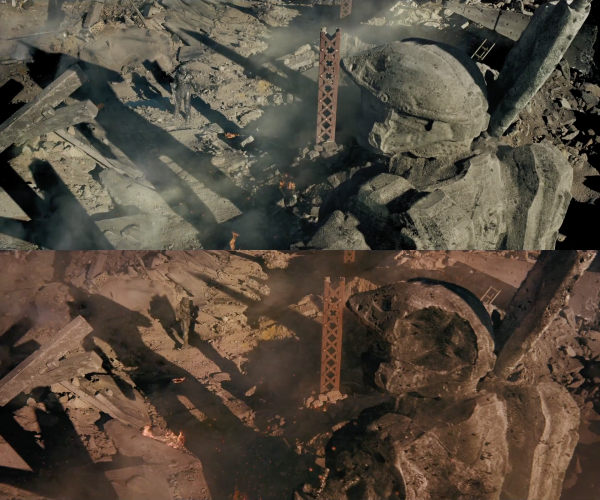 Now this next one has some interesting comparisons. As some others have pointed out, Locke’s HUD shows a BR in the upper right corner, but he was holding what appeared to be a DMR. Note that Locke has used up a lot more ammo than Chief. Locke also has less shields and health than Chief. Chief has two more grenades left than Locke. 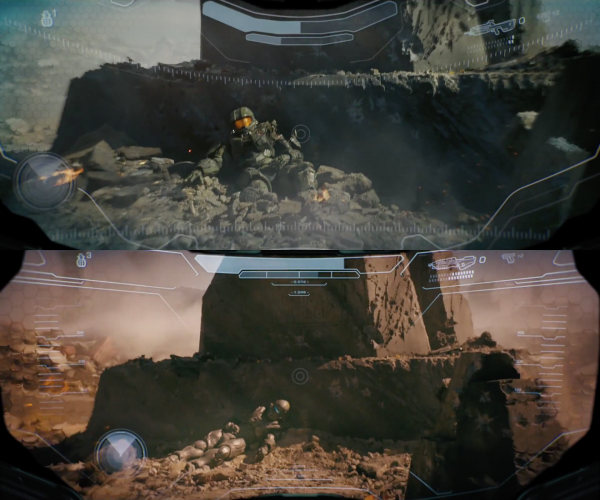 To me, those differences show that Chief is STILL the better Spartan. He didn’t need as much ammo and used an AR at that, versus Locke using a scoped weapon, be it DMR or BR.

Below shows that both Locke and Chief have a demagnetizer within the thigh armor and a magnetizer in the gloves. This hasn’t been seen before. I would think that Chief got an upgrade in his armor to have that. Speaking of upgrades, make not in the video that Chief’s chest armor does NOT have the pock marks from weapons fire. It’s been fixed or more likely replaced with another pieces of chest armor.

Both of these show the spartans is down and defeated shots. Does Chief leaning right (from his perspective, not our viewing one) means something? Is HE the one that is RIGHT? (My bet is on YES…it BETTER be yes! I really don’t want Locke to take Chief’s place.) 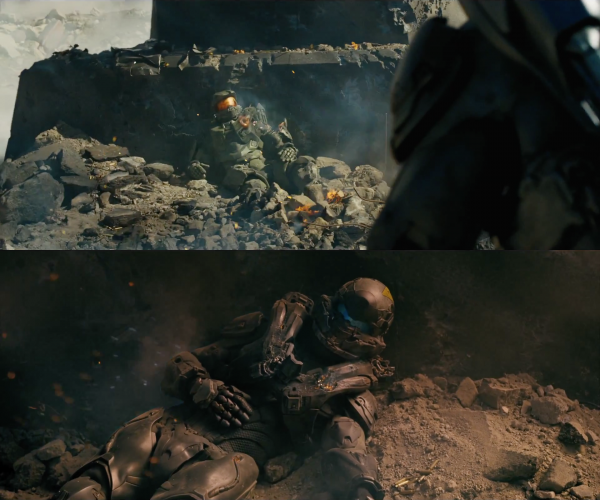 This next comparison has me a little disturbed. We do not know much about Locke other than what we’ve seen of him from Nightfall. We do know he works for ONI (Office of Naval Intelligence) specifically. So seeing him throw down his rifle to take Chief out on a more personal level with his magnum might not be out of his character. 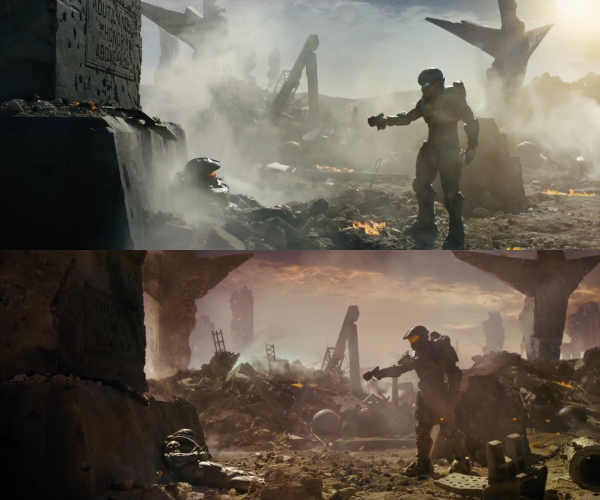 Conversely, Chief dropping his rifle to do that same is definitely out of character for him. Even if though he went AWOL, I still have to believe he has a lot of honor within. Taking Locke out with a magnum makes it personal. Was their battle personal? Well, listening to each video seems to say it wasn’t personal. Locke is on a mission to bring Chief back. Is it a ‘Dead of Alive” mission?  Chief’s mission itself since he went AWOL is personal. So could his demeanor have changed enough in the time between Halo 4 and Halo 5 so much, that he would make things personal?

With his decades of battlefield training and experience, I still say no, it’s not personal. However, with Cortana having ‘died’, Chief is now struggling with his emotions more. His connection to Cortana was on a much more personal level than even that of his fellow spartans. But that’s a little in the past now.

Was Chief on a personal level to try and find a way to recover Cortana? Does he find Halsey? Does he HELP Halsey? Does Locke KILL Halsey? If all of those are true, then I could see where Chief would make killing Locke with his magnum personal. Otherwise, he’s just to trained and experienced to do that.

Looking at this last comparison we see that the damage to both are very similar. Both have a hole in the chest armor that would be roughly where the heart would be beneath that all. Chief’s left shoulder is damaged, while Locke’s left thruster. It’s obvious both were going for the kill shot. 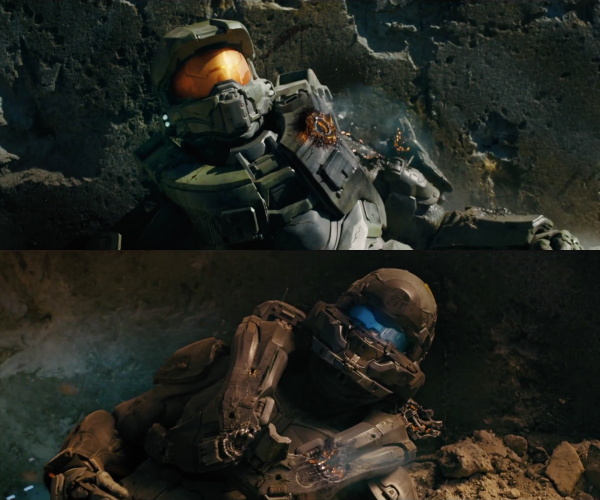 Now the discussion turns to, WHY? I mentioned some possibilities above.

We know that Locke is hunting Chief. Though, I’d prefer to say searching for him. He likely has a kill order issued so that if Chief can’t be taken alive, he has authorization to kill him.

Do the two of them even try to talk this out? Does one of Lcoke’s spartan hunter crew shoot at Chief and miss? This would of course alert Chief and he would have to fire back.

Does the Arbiter let Chief know that Locke is hunting him? They are friends now after all. Well, at least allies.

One big question though, how does Chief supposedly betray us? What could he have done that would have been so monumental as to betray humanity?

Could Chief have found Halsey or the other way around? Is she then still with Jul ‘Mdama?  If so, how and why would Chief work with Jul? Just to save Halsey? Possibly. After all, he lost Cortana and Halsey’s was the mind used to create Cortana. Not to mention, Halsey is like a mother figure to him. This as much we can glean from Jorge-058 in Reach when he talks to Halsey and refers to her as ‘mum’. So it is likely that most if not all of the Spartan IIs feel the same way.

For Chief to have betrayed the UNSC or all of humanity, it MUST be on a planetary or near galactic scale.

So what are your thoughts folks? Reply below or e-mail me at sal@halofanforlife.com.

1 thought on “HUNT the TRUTH commercial screenshot comparisons and discussion.”